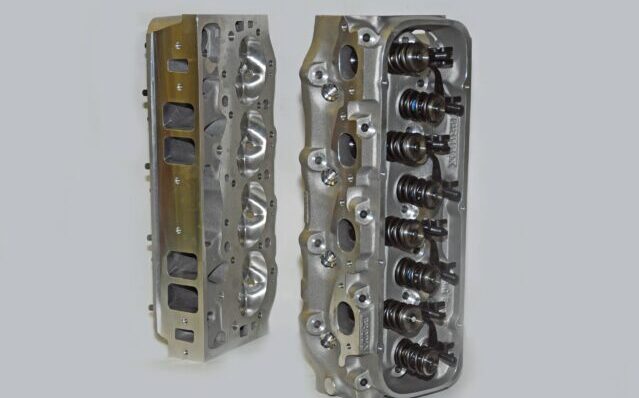 Last issue, we took a brief look at the direct bolt-on Brodix Race Rite series of cylinder heads (https://brodix.com). If you spin your browser back to that article, you’ll see that complete series of cylinder heads (big and small block Chevy) are engineered to work with many OEM components, including intake manifolds, stock location headers and factory accessories.  It’s a great concept and virtually all of the cylinder heads in that lineup offer considerable performance improvements over factory hardware.

Honestly, I was initially “all in” on the Race Rite BB-3 Xtra heads.  I had used a set of the regular Xtra O’s  (not the Race Rites) on a previous project and it proved to be an absolute beast from the power production end of the equation. The really big question though was exhaust port flow. Without raising the exhaust port on the Race Rites, Brodix can’t provide huge-by-large flow numbers on the exhaust side.  We all have to understand that flow isn’t everything when it comes to cylinder heads, but at least they provide a comparison tool.  And it’s particularly useful when comparing different heads from one manufacturer.  Here are the intake and exhaust flow numbers for the BB-3 XTRA 345 Race Rite (with stock exhaust port location) direct from Brodix:

As you can see, the intake side moves copious amounts of air. And that’s from a pretty much as-cast port (the intakes are lightly gasket matched).  But I wasn’t quite done yet. In conversations with the folks at Brodix, they suggested that the head I should really consider for my own combination is a regular BB-3 XTRA 345 head with a raised exhaust port. The intake ports are identical to the Race Rites shown above, but there’s a huge difference when it comes to the exhaust:

Raising the exhaust port (in this case, by 0.600-inch) really offers considerable performance advantages, provided you’re willing to deal with custom headers.  And the truth is, for my application, it wasn’t a tough deal to locate headers – they’re available on an order basis from Lemons Headers.

The really great part about the entire Brodix BB-3Xtra series is the fact they’re available with rectangular-shaped or oval-shaped intake port configurations, and two of them are offered completely CNC ported.  Brodix points out the out-of-the-box version is available in three port volumes, 327 cc, 345 cc or 363 cc, with CNC ported 119 cc combustion chambers, CNC machined bowls are blended and the ports are gasket matched.  The BB-3 XTRA full CNC ported rectangular port version is available in two intake volumes, 366 cc and 380 cc.  The 380 cc version flows over 440 cfm.  The BB-3 XTRA CNC ported oval ports are available in three port volumes:  332 cc, 351 cc, and 365 cc.  This wide range of port volumes allows the oval port to complement virtually any engine combination available.  In all of the heads in the BB-3Xtra lineup, the port design, port velocity, and overall layout have made them a force to be reckoned with.

We touched on combustion chambers above. Brodix can reduce the chamber volume right down to a minimum of 112-cc’s. Obviously, if you combine the reduced combustion chamber volume with a thinner head gasket, this allows one to raise the compression on a BBC without getting into a super big dome (of course, keeping finished deck height into consideration).  By the way, on a big block Chevy, if you have the heads flat milled, the chamber volume will be reduced by one cc for every 0.005-inch removed.

The Brodix BB-3 XTRA series of heads are engineered with a raised valve cover rail.  One big reason for raising the rail is because of the potential for oil pooling. Some manufacturers do not raise the rail on cylinder heads with raised exhaust ports. Because the exhaust ports are raised, there’s little space between the valve cover rail (on the header side) and the top of the exhaust port. With this setup, there’s a pretty good chance the valve covers will leak, simply because oil can pool and there’s no place for it to drain back easily.  And yes, the rail is drilled to accept a stock 7-bolt pattern valve cover.

Valve dimensions and rocker geometry changes are also common on many aftermarket heads. Yes, they’re good news for the application, but they can also cost you serious dollars if you’re not prepared.  If you do your homework, you’ll see that a number of aftermarket big block Chevy’s mandate valve train components that differ from stock (rockers and stud girdles are good examples, and as you know, swapping out valve train hardware isn’t without costs).  Similarly, revised valve (stem) length can have an effect on your valve train hardware.  But in the case of Brodix, it’s all engineered within the package. For example, the BB3 XTRA heads shown in the accompanying photos are fitted with 11/32-inch stem exhaust valves that measure 5.494-inches in length and on the intake side, the 11/32-inch stem valves measure 5.568-inches in length.  In comparison (and depending upon who you ask), factory big blocks were all produced with exhaust valves measuring 5.350-inches in length. Meanwhile, the intake valves measure 5.218-inches in length. In stock form, the stems are 3/8-inch in diameter.

Stock definitely isn’t good when it comes to rocker stud supports. Stock Chevy aluminum heads (particularly those patterned after production line castings) are often woefully inadequate here.  Simply stated, they tend to crack in the rocker stud boss areas.  Added support here is pretty much mandatory and when you look at the BB-3 XTRA heads, you’ll note the stud bosses are massive and pretty much a complete departure from anything Chevy built on the production line.   The other good news is Brodix lays out the rocker arm location for the BB-3 XTRA heads in the stock location. That means a standard stud girdle fits. It also means you can use conventional rocker arms along with OEM style pushrod guide plates.  Because the ports are larger, you’ll most likely have to use a 3/8-inch pushrod. But if you chose to use an aftermarket shaft rocker setup (Jesel and T&D both offer them), you can have the pushrod cup offset slightly. This allows for larger 7/16-inch pushrods.

Finally, accessory mounts (or more correctly, the lack of them) can also create grief with some aftermarket heads.  Some do not have provisions for things like alternator mounts, or for some electric water pump drives.  It doesn’t sound like trouble until you start mounting hardware.  You’ll note the BB3 XTRA heads use a stock mount layout in the stock location. That means you can use production line alternator brackets if you choose.

That’s a wrap for this segment.  Next issue, we’ll dig deeper into the BB3 head series from Brodix. You might be surprised at the level of sophistication Brodix has when it comes to cylinder heads.  Watch for it!