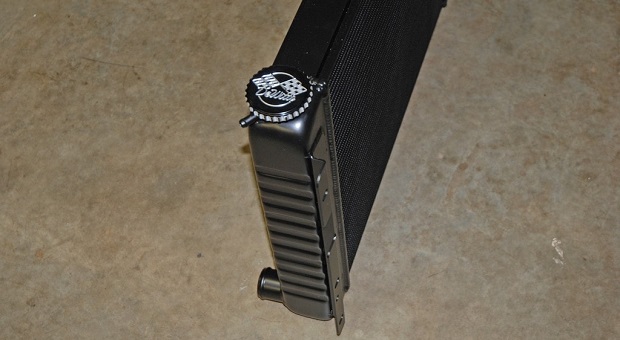 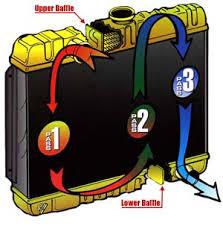 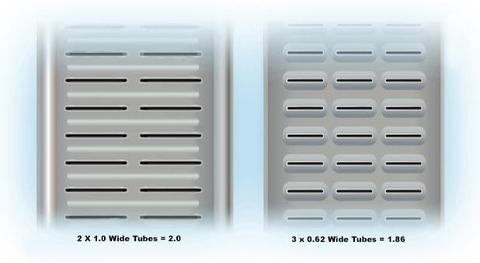 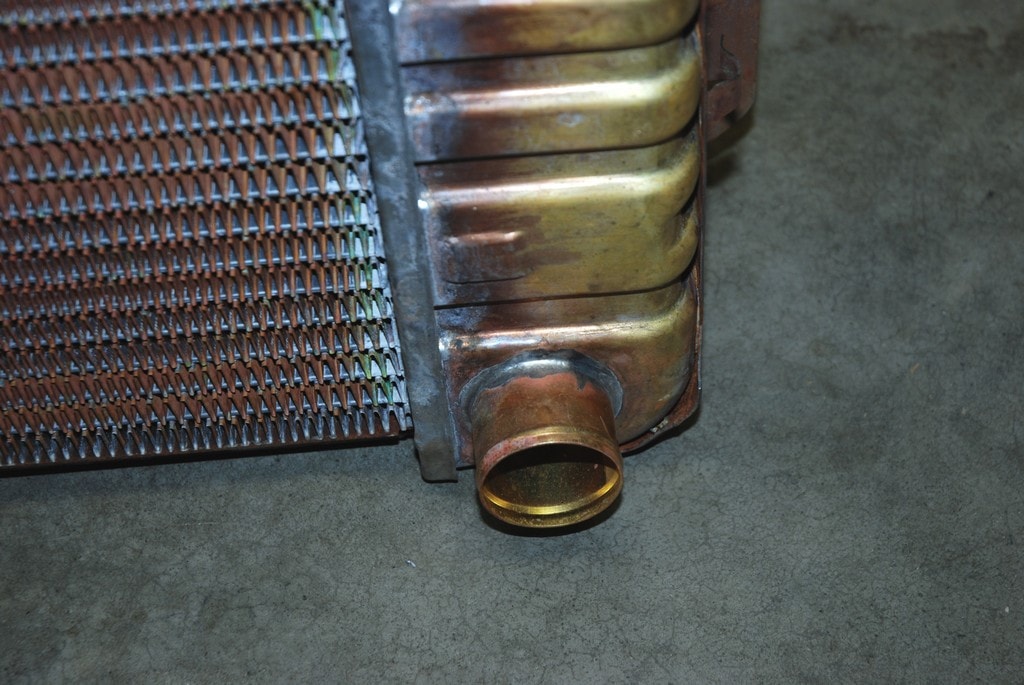 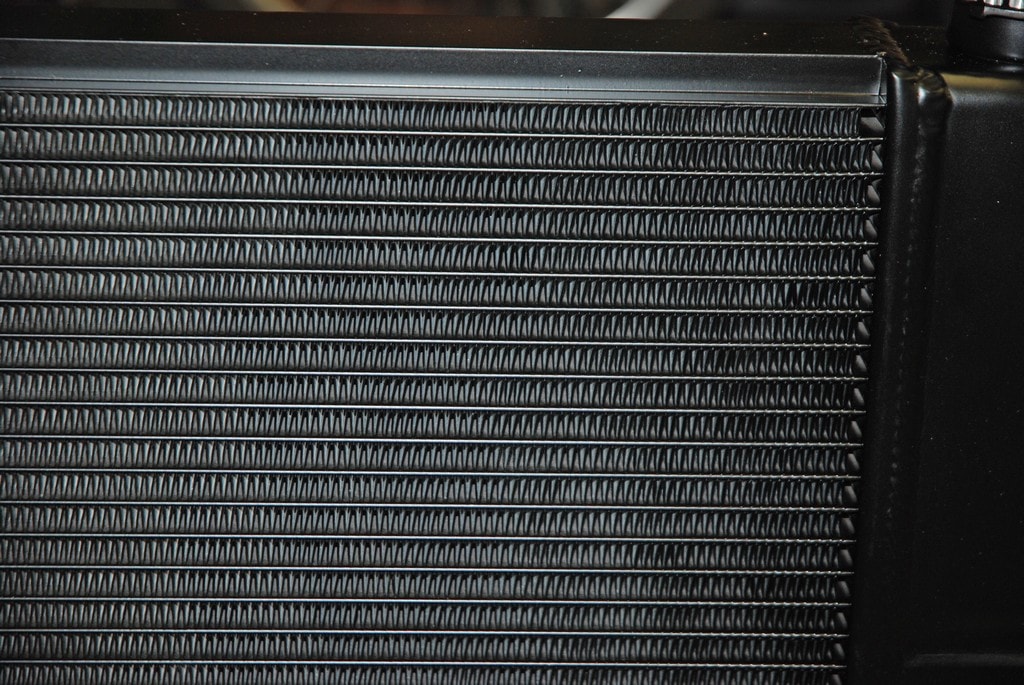 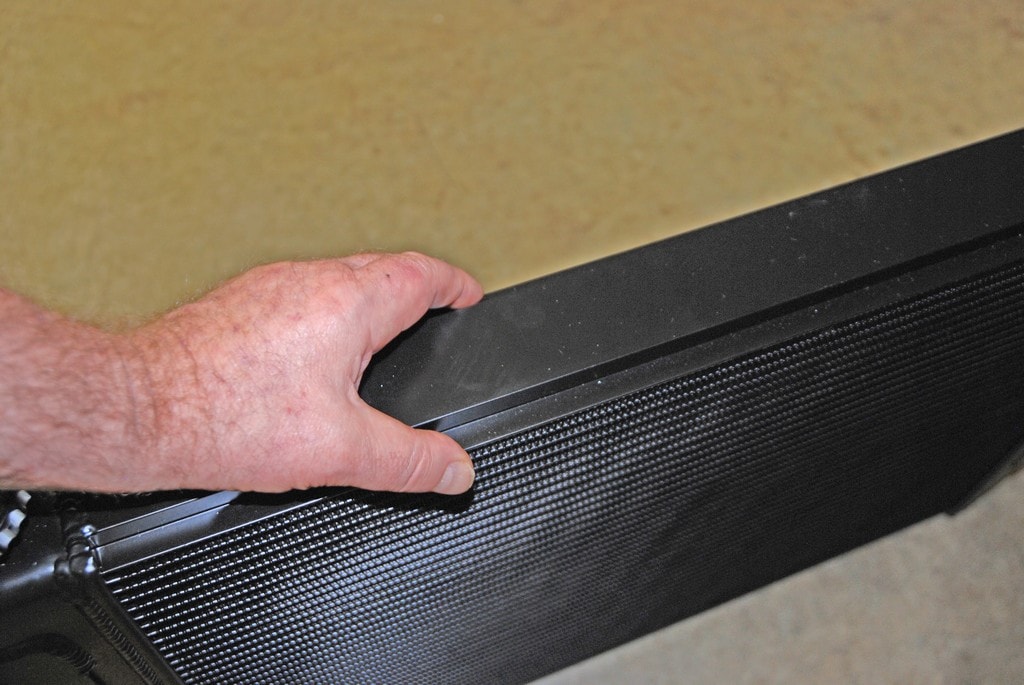 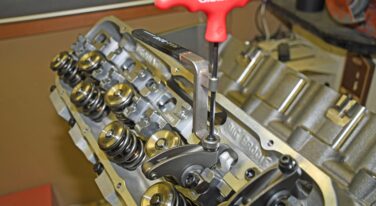 In our last issue, we dug into some of the verbiage companies use to describe and help sell their radiators. While some of it sounds plausible, the misinformation can cause all sorts of grief. As a result, we’re not quite done with false impressions when it comes to radiators: Some companies offer radiators configured as a double-pass or triple-pass design, and while that sounds impressive, the name can be a little misleading. On the surface, it sounds as if a double-pass radiator forces the fluid through the radiator two times. Trouble is, that is not the case.

DeWitts tells us that a double-pass design is nothing more than a baffle welded inside the end tank. What this does is cut the radiator in half, and the fluid flows through each half in series. Since each section is half the size of a full core, the fluid velocity is twice as fast and the pressure drop is now doubled. Many will argue this design is superior because the fluid stays in the radiator longer. The reality is that the fluid has twice as far to go, but it is also traveling twice as fast. In the end, the fluid flows through each tube only one time, and a more appropriate description would be a “U-flow” design. The design also demands both inlet and outlet to be on the same tank (which in some applications can prove problematic).

The same goes for a triple-pass radiator. It has two baffles, one in each end tank. Now the core is divided into three small sections and flows through each one in series. This creates very high flow rates and high pressure drops though the system.

Are three row aluminum radiators better than two? In the old days of copper and brass radiators, this was true. More rows meant more surface area in contact with the fin and, consequently, a higher heat rejection. As a result, a three-row radiator was better than a two-row rad and so on. When aluminum radiators entered the equation the rules changed. Cooling engineers concluded that by lowering the fin height you could stack more layers of tubes. In addition, using wider tubes would increase the tube-to-fin contact area. The end result was a very high performance radiator with a huge savings in weight.

But wait, isn’t there something called a “four core radiator?” Truth be told, there is no such thing. The term “four core” has been misused for decades and accepted for generations. One reason is that very few people understand how a radiator works and even fewer people know how they are made.

The term “core” is used to describe an assembly of parts. This assembly consists of tubes, fin, headers, and side plates. All these parts are brazed together to create the core. A radiator core can be made in several different configurations and materials. It could be made with copper or aluminum with each layer consisting of a group of tubes and fin. The number of tubes in each layer can vary based on the material and application. In this case, the term “four” is referring to the number of tubes in each layer. The correct term is actually “four row,” referring to the number of tubes.

DeWitts offers a radiator design we mentioned previously. It goes another step and offers a two row core with 1.25-inch tubes or (2.5-inch) tube-to-fin contact, and this configuration would again exceed the performance of a four-row imported core design. So if you are researching your next purchase, ask about the tube width. That will tell you a lot about the heat rejection and the origin of the product.

Fair enough, but what kind of rad can you (or should you) get? There are all sorts of them out there. Some are far better than others - no surprise. Next issue we’ll dig into some pretty cool (pun intended) radiators. You might be surprised at the high technology out there and available to you. Keep your browser pointed at these pages for more.
Image courtesy DeWitts Radiator.

This is what boils down (pun intended) to a “three pass radiator.” A triple-pass has two baffles, one in each end tank. Now the core is divided into three small sections and flows through each one in series. This creates very high flow rates and high pressure drops throughout the system.
Image courtesy DeWitts Radiator.

In the days of copper-brass rads, more rows meant more surface area. Not so much today. Here’s a look at the difference between a pair of 1-inch tubes versus three 0.62-inch tubes. Check out the text for more.
Up close, take a look at the core on an old style copper-brass radiator. There’s plenty of dead space within the core.
Contrast that with a modern, well-engineered aluminum radiator.
Something else you can’t tell by looking is the fact this DeWitts radiator is their high performance example. That means it has two rows of 1.25-inch tubes. It will out-cool any of the old four core copper brass radiators.
Back to Post