RacingJunk News > How-To and Tech Tips > Fuel Delivery > Should I Go with Turbos for Off-Road? 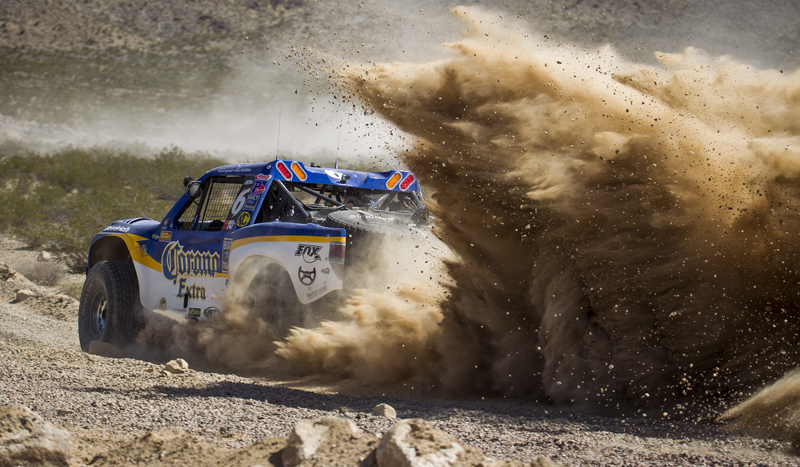 As we continue down the road of fuel efficacy and smaller engines, the OEMs have begun to look towards turbochargers to get some of the power back from dropping two cylinders. However, in that same train of thought, could the off-road world take some of that ideology and make it work for them? Let’s consider turbochargers and start with the basic: “What is a Turbo and how does it work?”

A turbocharger is a form of forced induction that increases the amount of air being forced into an engine during the intake cycle. At least that’s the simple way of looking into it. Of course, the reality is turbocharging can be complicated and we’ll get into some finer details like compressor maps, A/R, and more some other time. For now, we’re sticking to some of the basic details so you’ll understand what’s going on inside that magical snail. 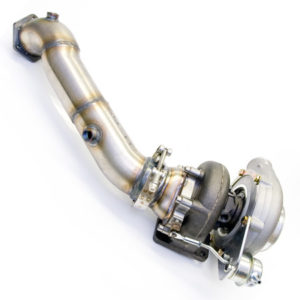 A turbo is made up of a compressor and a turbine. The turbine is on the exhaust side and it drives the compressor wheel that forces air into the intake. The compressor wheel is where the forced air is coming from. It is called a compressor as it does increase the volume of air to above atmospheric pressure and is called “boost”. Atmosphere is the pressure you feel around you right now and that is 14.7 PSI at sea level. As you increase or decrease your altitude you increase and decrease your relative atmosphere. That is the reason why a boost gauge never reads in absolute pressure and just reads boost pressure. A turbo may increase the engine’s atmospheric pressure by 7 PSI, for example, but 7 PSI for me at my altitude may be an actual 21 PSI in total atmosphere in the combustion chamber while yours could be higher or even lower depending on what your altitude is.

The turbine and compressor wheels are connected by a shaft that will spin on a bearing that will either be a bushing bearing or a ball bearing. Bushing bearings are usually made of a softer metal like bronze and rely on oil to keep the shaft spinning freely while a ball bearing will use as its name implies, ball bearings. The ball bearing style will be more efficient as it does spin more freely but will also be more expensive. A final component in some turbos is the wastegate. The wastegate is what monitors the boost pressure and will bleed off exhaust pressure to decrease boost pressure. It will dump the excess exhaust back into the downpipe. In simple turbo systems and most OEM turbos, the wastegate is integrated into the turbine housing and you’ll see a little flap on the downpipe side of the turbo near the turbine wheel. There is also an external version you’ll see in the aftermarket and some higher end turbo cars and turbos that do not have integrated wastegates at all, but still work towards the same goal: reduce exhaust pressure to reduce the boost the compressor wheel puts out. 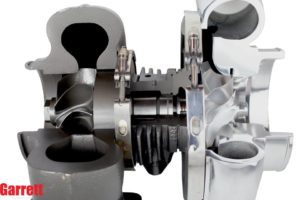 Turbos aren’t the only popular form of getting more atmosphere into the engine. While they both boost and help make your engine make more power, there is a difference between a supercharger and a turbocharger. The basic and most obvious difference is how each drives their compressors. A supercharger is a belt driven forced induction system that uses the engine’s crankshaft to drive its compressor lobes or the gearbox attached to the compressor wheel on centrifugal style. Inside the snout of the supercharger is a pair of gears which transfers the spin of one lobe to the other. It’s also where the supercharger gets its famous whine noise.

A roots-style supercharger uses twin straight compressor lobes and the rotary screw (or Lysholm) uses a pair of twisted compressor lobes. The advantage of the rotary screw is that the twin-screw exhibits internal compression which is the ability of the device to compress air within the housing as it is moved through the device instead of relying upon resistance to flow downstream of the discharge to establish an increase of pressure in the case of the Roots supercharger. 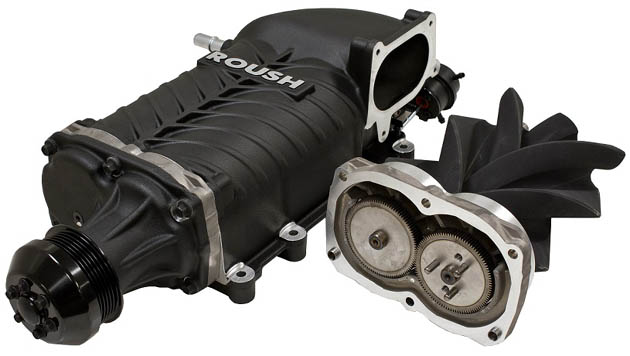 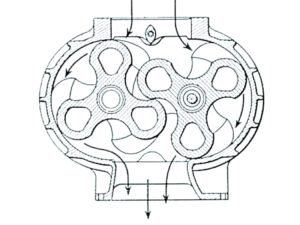 The advantage of superchargers is near instant boost. Instead of waiting for the turbine to spool up the compressor wheel to create boost, a supercharger will typically start making boost in as little as 2,000 RPM. The centrifugal is in-between when it comes to boost lag, the term that describes that spool up time. However, it is more efficient at making boost and can potentially make more power than a roots-style. The advantage for the aftermarket for superchargers is that it is easier to get a supercharger 50-state legal. Part of the flack a modern turbo gets when it comes to emissions is that the turbo can act as a giant heat sink that will not allow the catalytic converter to heat up to the proper temperature to convert exhaust gasses into “safer” exhaust.

Well, that used to be the case. Now, though thanks to advances in metallurgy we’re starting to see turbos capable of taking over 1400-degrees-Farenheit at the turbine inlet and still exhaust out gasses that are up to 1300-degrees-Farenheit which still plenty hot to allow the catalytic converter and the Pre-Cat to do their jobs. The other advantage of the turbo is efficiency. Instead of using a belt on the crank of the engine to turn a gear box and robs 10-20 horsepower or more, the turbo uses wasted gasses from your engine to create boost which makes more horsepower and torque. Also, unlike superchargers, you can control the amount of boost the turbo creates by using a boost controller in the ECU (like how the OEMs do) or by a standalone controller. 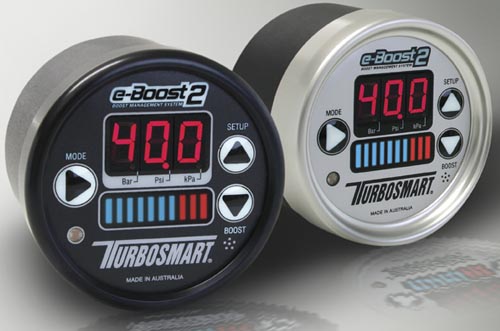 The greatest thing about a turbocharger is the ability to change how much boost will come into an engine by a twist of a knob or even the push of a button. That seems mythical, the boost controller. How can you suddenly make a mechanical thing not see something that is there? Well, it’s all in how a wastegate works and the boost controller takes advantage of it. Inside the wastegate is a metal spring and a rubber or neoprene diaphragm. The pressure side of the wastegate housing has a nipple (or a provision to install one) that will have a hose connected to it. In normal circumstances, it connects to the intake manifold looking for boost to feed into the wastegate. Once the right amount of boosted air is in the wastegate, it forces the diaphragm to push on the spring in the wastegate and opens the valve to bleed off exhaust gases away from the turbos turbine. 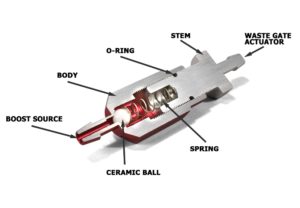 An electronic boost controller is doing essentially the same thing. However, instead of relying on a ball valve and spring pressure it relies on a boost pressure sensor and a solenoid. The solenoid is kind of like a magnetic switch, where when you apply current it charges a coil to move a pushpin, bar, or valve in the case of it being a boost controller. In it, you get electronic accuracy and will set it to boost pressure without the need to slowly screw the controller like on the manual boost controller. Electronic Boost Controllers range in abilities from simple boost controlling to staged controlling (where you can set boost for speed, RPM, gear, nitrous, etc) to being able to over-boost. 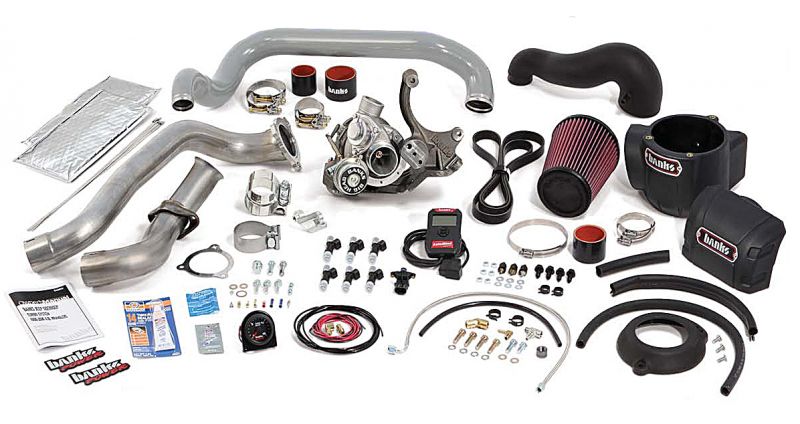 Over-boost is a real thing, not just some video game created power-up. It is used to create a higher boost point than you normally use and it’s not necessarily where the turbo will blow or engine will melt down. Though, if you’re brave or stupid enough it could be at that point. You can make it as simple as a push of a button and you get more boost for as long as you hold the button. It can be your “OH SH%#” button, your “I need more torque” button, or it can be “I’m really this stupid and will blow the engine” button. The choice on that one is yours to make. 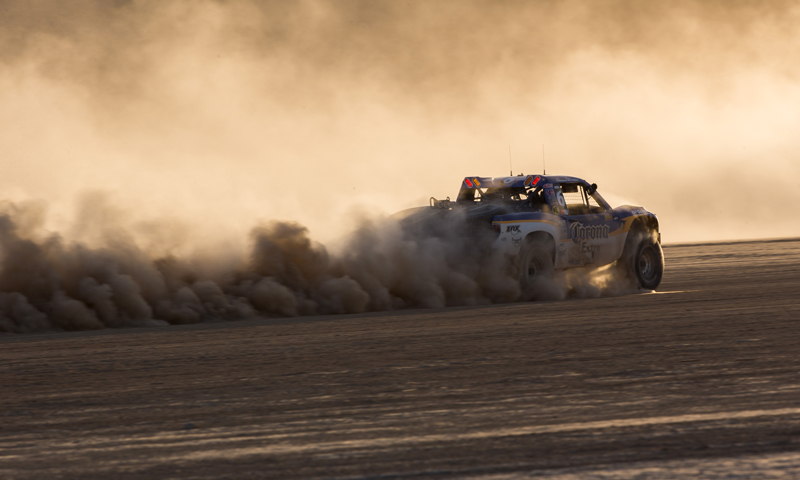 The idea for manufacturers going to turbos is two-fold: one, they can control the amount of boost a turbo can produce by manipulating the wastegate through boost control. Two, because of that control they can utilize a smaller engine to produce the same power and an engine with two more cylinders and yet be able to save gas to improve fleet fuel efficacy. You can utilize the same gains in the aftermarket – by using a smaller engine with a turbo you get the power of the larger engine with better fuel mileage for long run times. You can also manipulate the boost at the turn of a knob, push of a button, or a pre-programmed setting in your ECU to make more power when you need or want it, unlike a supercharger. Finally, unlike a gaseous power adder that can also be hit at the push of a button, you don’t have to refill a turbo. More power, power on the fly, and longer time out in the dirt? How can you say no to that?