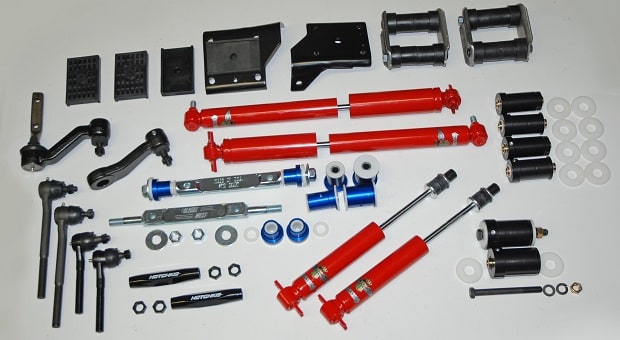 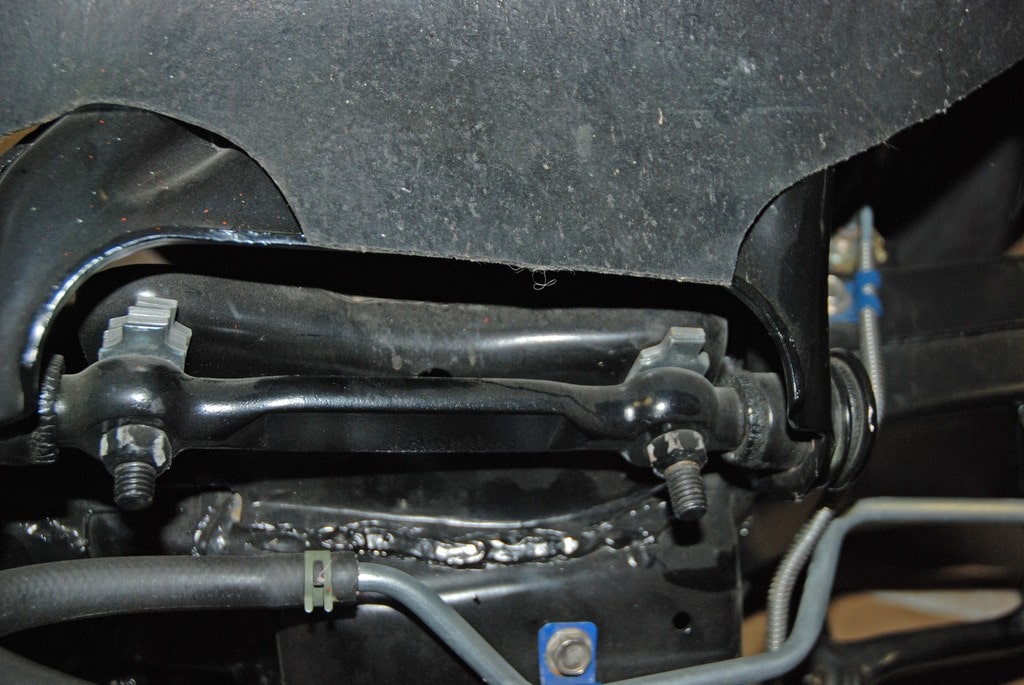 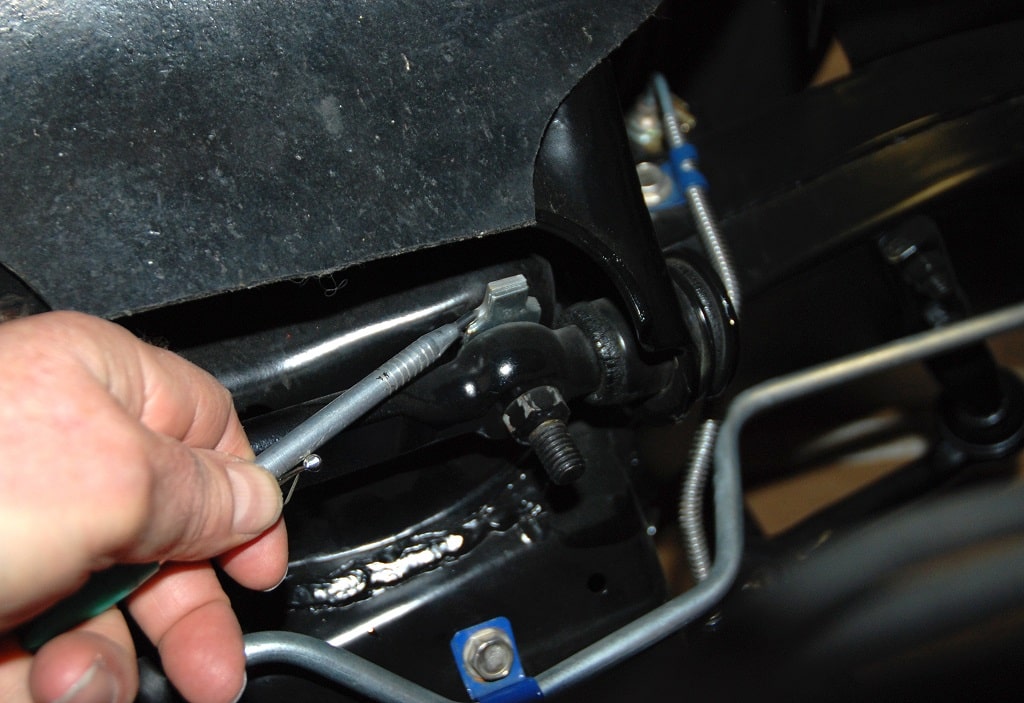 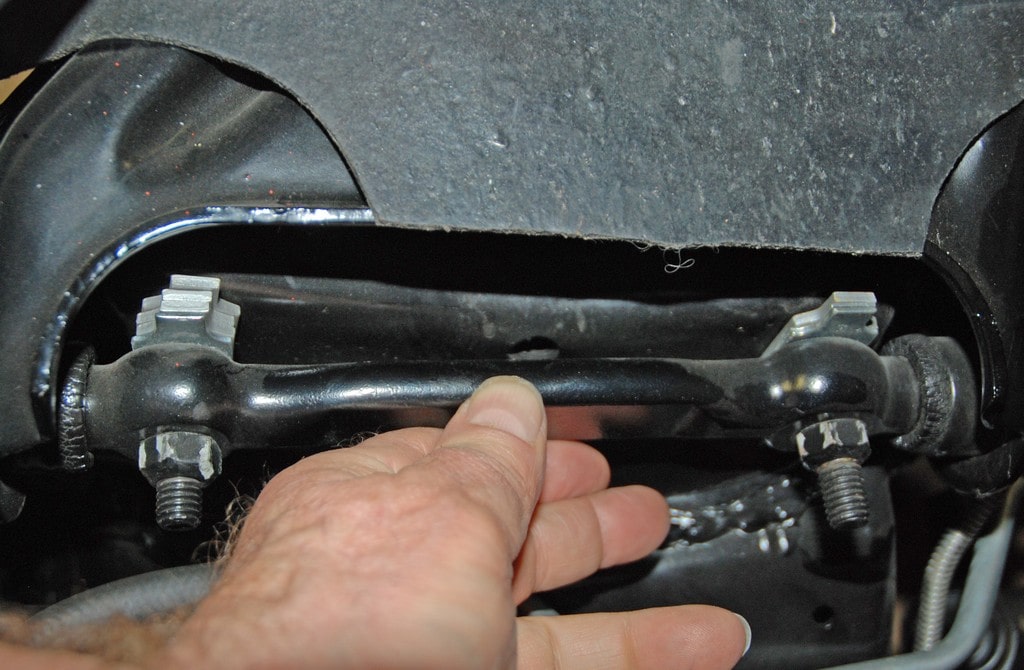 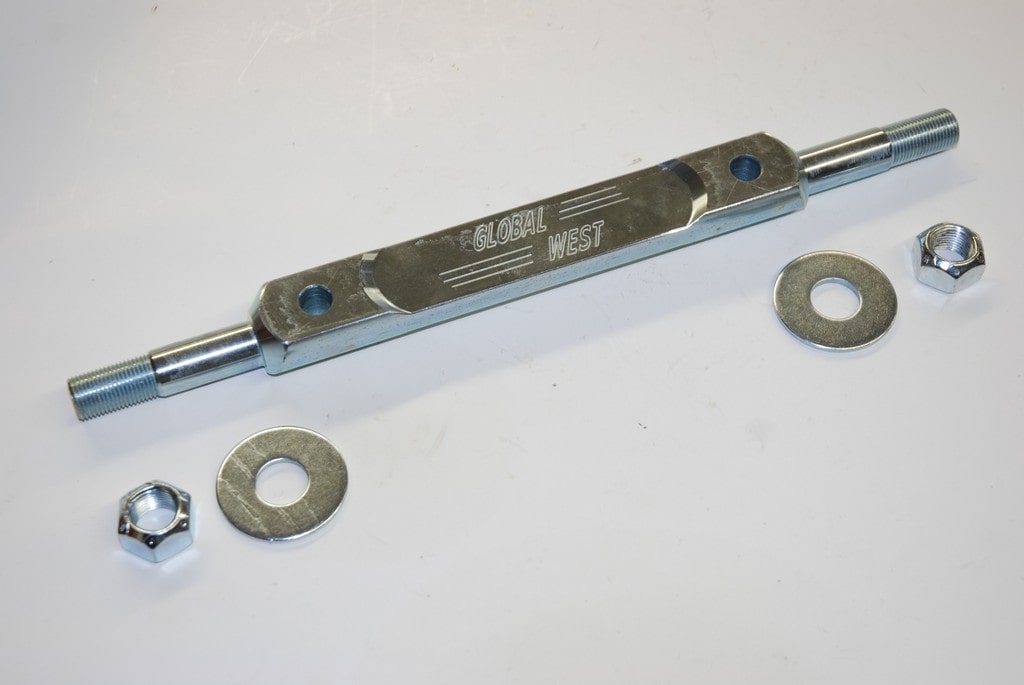 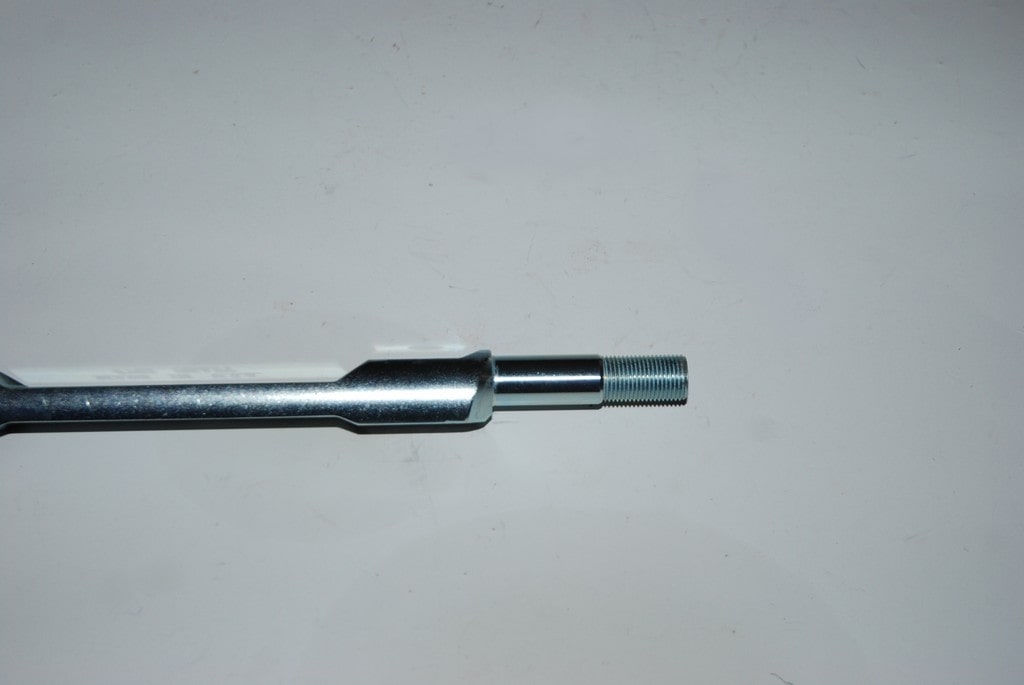 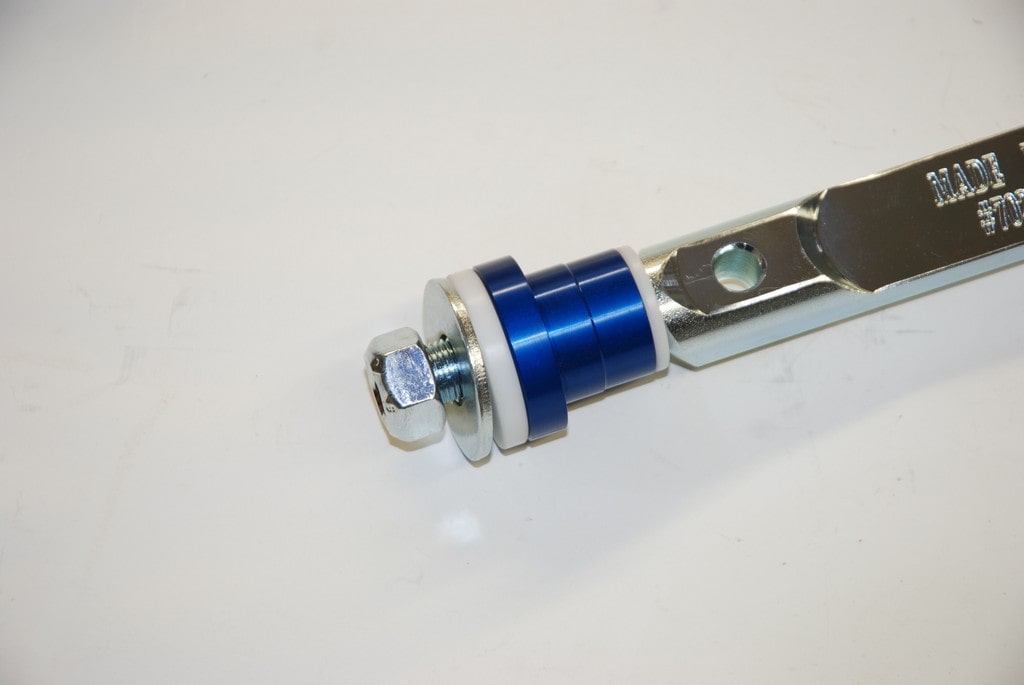 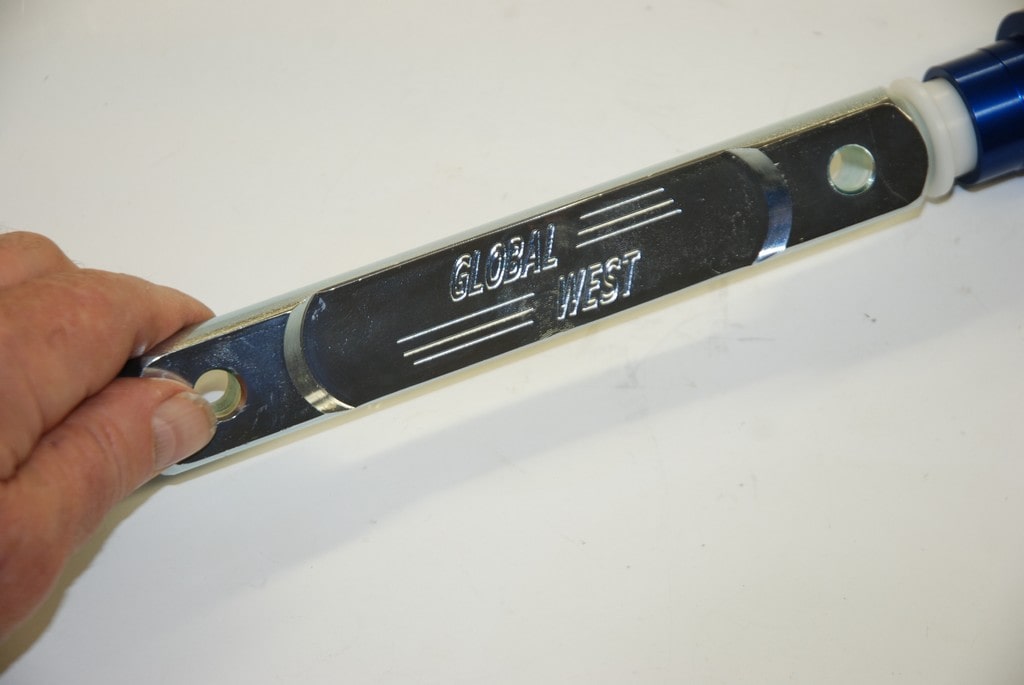 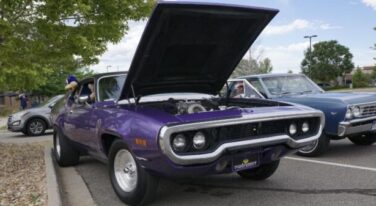 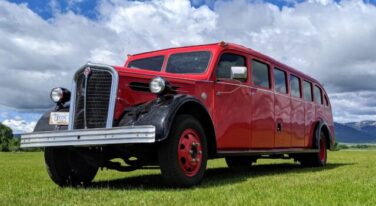 Today’s Cool Car Find is an All Original ‘Cuda for $400,000
Click Here to Begin Slideshow

In our opening article of this series, we introduced you to Delrin bushings for both the upper and lower control arms. Classic Industries (18460 Gothard Street, Huntington Beach, CA 92648; PH: 800-854-1280; Website: www.classicindustries.com) recommended we swap out the old rubber bushings with examples from Global West. In this segment, the folks from Classic offer some great advice on how to gain caster with another simple bolt-on component. Check it out:

The stock front suspension pieces bolted to the nose of many cars, such as the first gen Camaro or its fraternal Nova twin, were never optimized for quarter mile use or for burning corners. Vehicle manufacturers were typically conservative when it came to built-in caster. Chevy was certainly no exception.

Let’s stop right here for a minute: What’s caster? Caster is the backward or forward tilt of the spindle as you view it from the side of the wheel and tire. When caster is positive, the spindle tilts backwards, which places weight behind the tire contact patch. If the caster is negative, the top of the spindle is tilted forward, which places weight in front of the tire contact patch. Caster is expressed in degrees, and measures the amount the centerline of the spindle is tilted from true vertical. For the most part, OEM caster figures seldom go beyond -3/4° (negative), but in almost all drag race applications, several degrees of positive caster is definitely preferred.

Why? Consider positive caster as a way to "self center" the steering. Ponder bicycles for a minute: A comfy long distance touring bike will have a fork that's kicked out. This fork “kick out” provides a big chunk of positive caster. In turn, the bicycle experiences a significant amount of directional stability (although it can be more difficult to turn). Then take a look at a mountain bike. Here, the fork is much closer to vertical. The benefit of the mountain bike is that it can turn very quickly and easily; however, it definitely lacks directional stability. The bottom line is, you can easily ride a touring bicycle with your hands off the handlebars. It’s not that easy with a mountain bike.

Camber is the tilt of the wheel at the top (tilting in or tilting out). Camber is expressed and measured in degrees, and looks at the tilt of the wheel from true vertical. If the wheel and tire package tilts out at the top, this means the camber is positive. If the top of the wheel and tire package tilts in, camber is negative. The idea behind camber is to keep the tire planted squarely on the pavement. This creates maximum front tire grip. In theory, it sounds like zero degrees of camber is good, but that isn't always the case for cars that were originally production line built (not purpose built as in a tube frame car). Most production line cars require different camber figures (while at rest) so that good grip and tire wear is maintained as the car travels down the road. Typically, a car with a small amount of negative camber will exhibit better drag strip handling characteristics without killing the tire.

Back to Caster: A typical stock 1968-72 Nova has a factory caster specification of ½-degree + or – ½-degree. In order to adjust the caster in a stock Nova or Camaro, you transfer shims front to rear or from rear to front. If you transfer one shim (1/32-inch) from the rear bolt to the front, it will decrease positive caster by approximately ½-degree. The opposite (transferring one shim from the front bolt to the rear bolt) will increase positive caster by approximately ½-degree. That same vintage Chevy has a camber specification of ¼-degree, + or – ½-degree. To set camber, you have to add or subtract an equal number of shims from the front and the rear bolts on the a-arm cross shaft. One shim (again, 1/32-inch) at each location will change the camber by approximately 1/5-degree. Adding a shim at each end will decrease positive camber.

Camber and caster are usually set together. What that means is you’ll probably run out of room to properly adjust the caster and camber on a the car with stock a-arms. This becomes very apparent when you try to get a reasonable (for drag racing or a fast street car application) caster number in a vintage Camaro or Nova.

When you run out of room at the shim pack for adequate caster (and you will), there’s a solution to obtain more caster without resorting to aftermarket a-arms: an upper a-arm cross shaft manufactured with offset in it. A very good example of an offset control arm shaft is the Global West example shown in the accompanying photos. The offset built into the shaft physically moves the a-arms outward toward the curb. It provides for additional camber, but it also allows you to easily increase caster by removing equally from the front and adding to the rear of the a-arm with minimal effect on camber. When you add shims on the rear stud, it moves the upper ball joint rearward, creating more positive caster. Typically with an offset control arm, you can obtain approximately 3 to 4-degrees of caster (keep in mind this is really dependent upon the car).

Next up are the shock absorbers, which are pretty much equal to the bushing choice when it comes to revitalizing the suspension. We’ll dig into them in the next issue, then move on to ball joints, tie rod ends and more. Meanwhile, check out the accompanying photos on cross shafts:
Increasing shims equally on the front and rear of each cross shaft increases or decrease wheel camber. Camber is the tilt of the wheel – in or out at the top.
Adding shims to the rear of the cross shaft (in relation to the front of the cross shaft) increases caster. Caster “tilts” the spindle. More caster helps the car track straight.
Caster and Camber are usually set together. This usually means you run out of adjustment to increase caster significantly. By this, we mean there often isn’t sufficient room on the rearward stud to increase the amount of shims needed. Even if you could, the size of the shim pack would likely be unacceptable.
The solution is an offset control arm cross shaft. This is the special example from Global West (designed to accept Global West bushings).
Viewed from the top, you can see the offset built into shaft. This effectively allows you to increase caster without resorting to a massive shim pack.
Here’s how the Global West bushings install on the cross shaft.
When installing the cross shaft, ensure the engraved “Global West” name faces the engine compartment. This confirms the cross shaft is oriented correctly.
Back to Post