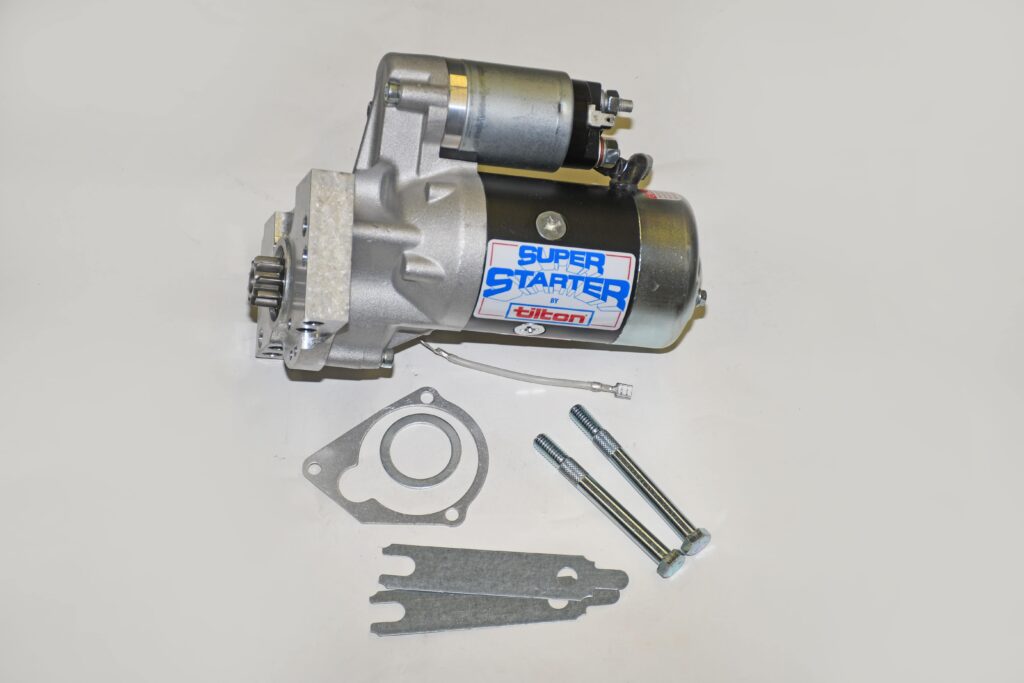 When it comes to turning an engine over, it always seems starters tend to dislike two things: Compression and heat. Increase the compression ratio and the starter isn’t happy. Increase the temperature and it gets grumpy. Mix high temperature (engine and ambient) with a higher-than-normal static compression ratio and the starter becomes downright cantankerous. To make matters worse, whenever the thermometer really rises, you too can personally approach the boiling point, particularly if you have a dedicated racecar or street-strip car that refuses to crank over, let alone start. Sound familiar? If it is, then you need to check out the following pages. It’s a look at modern starting systems, aimed directly at modified cars that, appropriately, have added heat under the hood (as you know it’s an all too familiar saga — adding horsepower adds heat). And it’s jammed with real cures for hot starting headaches. Take a look. You won’t be sorry.

Why is it that starters give up at the worst possible moment — such as when you’re at a car show or cruise night and you jump into your hot rod to profile and for the lack of a better term, to show off? Or when you’re in a “hurry up and wait” situation in the staging lanes at the drag strip? And why is that an 800+ cubic inch Mountain-Motored drag race engine combination (complete with a 16+:1 compression ratio) has no problem turning over, but your 10:1 compression ratio 350-inch small-block fails to spin at even the slightest hint of heat soak?

Those are tough questions, and they’ve been addressed in countless magazine pages by way of a plethora of quick fixes (rewired starters, Ford solenoids, heat shields, header wraps, etc.). But the real answer is the starter that’s bolted to the side of the block. Lets back up a bit: Decades ago, racers discovered the gear reduction starter — a design that was initially popularized by the old Chrysler Corporation. Those Mopar-based gear reduction drive starters worked. But the trouble with the Mopar system was (and still is) weight and bulk. That starter was a very hefty piece — try bench-pressing one a few times and you’ll exactly know what we’re talking about. And to add to the troubles with the Chrysler-configuration starter is the inherent complexity of the unit. Sure it will start a hot, large displacement engine with ease, but if you use one, the (considerable) superfluous mass is on the wrong end of the car. Then the folks from Tilton Racing (www.tiltonracing.com) noticed something: Many Japanese vehicles are also fitted with gear reduction starters. In-line four-cylinder engines power many of those cars. It’s been said that the firing order arrangement of an in-line engine can actually create more difficult starting problems than those associated with V8 power plants. Just as important, those Japanese car starters proved small, light and durable. Bingo. Lights went off.

What was really needed was a lightweight, simple gear reduction starter that combined the best of the vintage Mopar designs and the later Japanese configurations. Given this situation, Tilton Racing came up with a new starter design (and that’s the starter shown in the accompanying photos). This starter design relies upon a gear reduction format: With a gear reduction of 3.75:1, the motor can turn easily at a significantly higher RPM. Why is this important? Typically, a starter motor will draw higher electrical energy loads at low turning speeds. The gear reduction format solves that problem. Loads are decreased, windings are not as likely to become overheated and far less current is demanded from the battery. In the end, a starter such as the Tilton only requires roughly 230 amps of current to function (that could be as much as half of the draw found with a conventional starter under this condition). This leaves a considerable amperage reserve for the ignition system to supply spark to the turning engine.

But just as important, these mini-starters also deliver a whopping 50% more torque to the flywheel (or flex plate if your car is automatic-equipped) than a conventional original equipment starter. Internally, the Tilton mini starter includes internal vibration damping and added electrical insulation to provide for long service life and it also makes it less susceptible to heat issues.

Typically when the engine displacement exceeds 500 cubic inches, and when the compression ratio increases past 12:1, it may be necessary to use a larger mini-starter (which seems like a contradiction, but it isn’t). By using a motor with larger field windings, a stronger armature and bigger brushes, torque increases over a conventional mini-starter can multiply by an extra 40%. In turns of hard numbers, some of the conventional mini-starters out there produce roughly 1.6 HP. In contrast, the Tilton Super Starter has a rated power level of 2.0 Kilowatts (approximately 2.68 HP). But that’s conservative. The Super Starter shown in the accompanying photos actually produces 2.27 Kilowatts of power in the real world. That converts to approximately 3+HP. In terms of torque, the Tilton Super Starter produces 21.0 Nm (Newton Meters). Converted to foot-pounds that works out to just under 15.5. Equally important, under load the Super Starter has a maximum speed of 1193 RPM and at that speed, it produces almost 13.5 foot-pounds of torque (18.19 Nm). And by the way, these are the exact figures from the starter shown in the accompanying photos. Tilton tests each and every one of them.

The solenoid Tilton uses on their starters is a heavy-duty job, and it can reliably handle 16 volts and simultaneously provide the extra grunt necessary to spin engines with locked-out distributors. Tilton switched this Heavy-Duty solenoid in August of 2015 (included as standard equipment on all 40000 series) and they’re available separately under part number 54-422HD.

As you can see from a power perspective, Tilton Racing’s Super Starter is one stout piece. But we’re not quite finished. It’s also extremely easy to install and the setup is equally simple. Next issue we’ll dig deeper into the mechanics. In the meantime though, check out the accompanying photos: