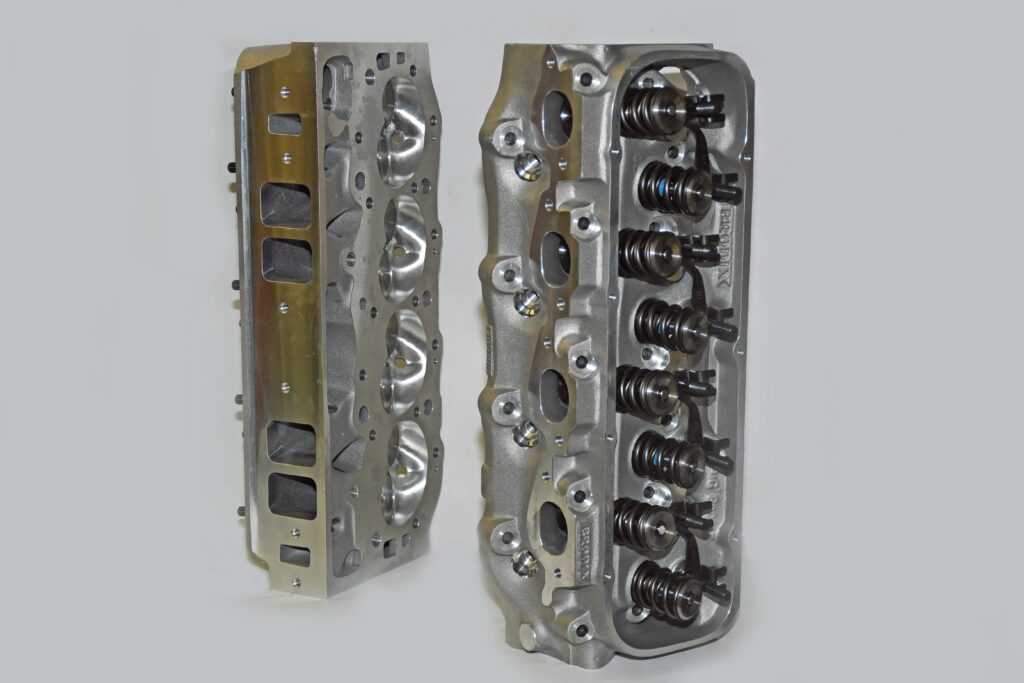 Over the past three issues, we’ve dug into Brodix BB-3 XTRA heads in general and more specifically the 345 cc examples.  If you recall, this is a high quality casting with all of the work performed in-house at Brodix (https://brodix.com).  Brodix rolls the head over 2-degrees, raises the exhaust port and does a considerable amount of prep to the casting, just short of fully CNC-machining it.  Much of the technology is leading edge.  Brodix is quick to point out that continuous research and development is a way of life at the company, and it shows in these cylinder heads.

With this issue, we’ll show you, and provide info on the components Brodix uses to finish the cylinder heads. Some are proprietary.  Some are not. Plus, Brodix uses different parts for different applications. For example, there’s a different valve spring for a low lift hydraulic roller versus a big lift solid. That means a different retainer is used, a different spring locator is used and so on.  Also keep in mind you can buy various versions of the heads bare.  Since Brodix uses components from various manufacturers, some items may also be different if you order a set of heads.  Let’s start at the top with the valve gear on this version of the BB3 XTRA 345 package head (Brodix Easy Order Part Number 2031015):

As previously mentioned, in these heads the stainless steel valves have 11/32-inch diameter stems.  The valve springs are 1.625-inch diameter jobs from PAC, part number 1224. This is a dual spring setup with an OD of 1.175-inch on the outer.  The inner spring has an ID of 0.851-inch.  There is no damper. The spring has an installed height of 2.00-inch along with an open height of 1.150-inch.  Obviously, that means it can work up to a lift of 0.850-inch.  It has reaches coil bind at 1.100-inch and has an open load of 810 pounds.  At installed height Brodix notes the spring has a load of 250 pounds.

In this case, the spring retainers are also from Manley (part number 23640). They’re manufactured from 6AL-4V titanium. This grade of Ti is sometimes referred to as TC4 or Ti64.  It’s an alloy that possesses a high strength to weight ratio and it finds a lot of usage in the aerospace industry.  The retainer is machined for 10-degree locks and is designed for 0.100-inch taller installed height. The OD is obviously 1.625-inch. Each retainer weighs 20-grams.

As mentioned above, the locks are 10-degree steel jobs.  In this case, the locks are sourced from Competition Cams (part number 611).  They’re designed with a lash cap recess and (obviously) fit an 11/32″ valve stem size. As most folks know, Comp’s “Super Locks” have a wider angle (10°) that better distributes the valve spring loads over the retainer when compared to conventional 7° locks.

The pushrod guide plates are also sourced from Comp Cam (part number 4806).  They’re a conventional raised type but unlike OEM guide plates, these have a rounded profiles.  In this case, the guide plates are designed for use with 3/8-inch pushrods.  They also accept OEM-sized 7/16-inch rocker studs.

Speaking of rocker studs, Brodix has a proprietary setup they use for this (and other) big block cylinder heads. It has a base stud length of 0.750-inch while the top is 0.250-inch longer than stock. Typically, Brodix has these made by ARP, however they may use similar studs from other manufacturers from time to time.

As you can see, “package” heads from Brodix are very well equipped and clearly well thought out and well assembled.  In terms of power production, these heads can produce big numbers, but they won’t break the bank (especially when compared to fully CNC-machined jobs or hand ported examples). At the time of this writing, suggested retail for a complete package head is just over $1700 (per cylinder head).  And if you shop, you can probably find them for even less.  Head Games?  The folks from Brodix are well known in the industry as straight shooters, and there’s none of that with this setup.  For a closer look, check out the accompanying photos: