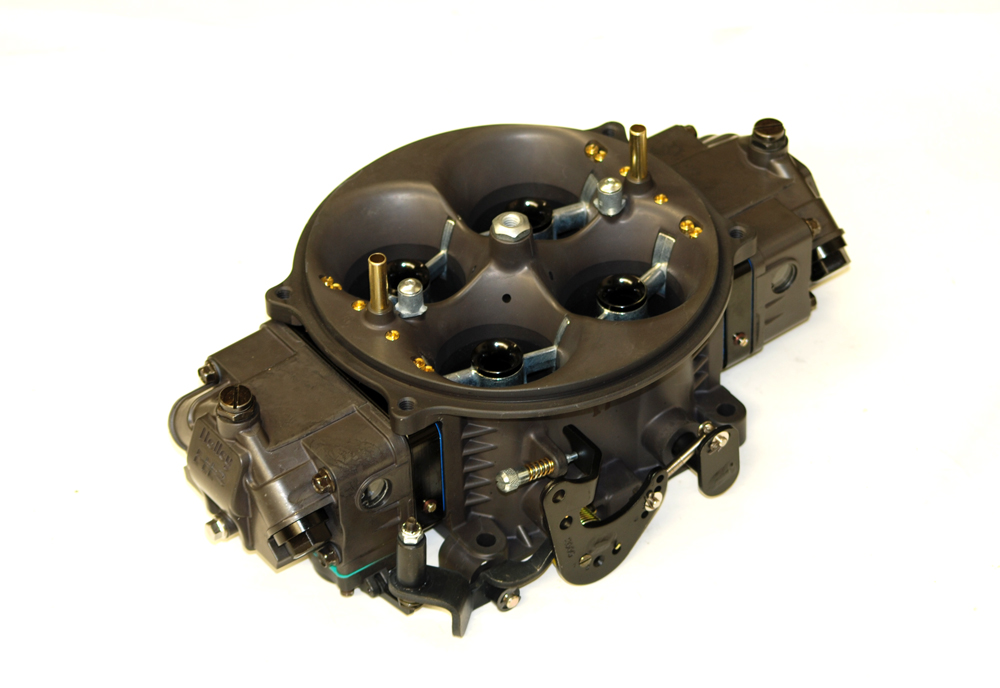 Roughly four and a half decades ago, the very first 4500 series Holley carburetors made their debut in the old NASCAR Grand National circuit. Ford was locked in a battle with Chrysler for dominance on the high banks. Multiple carburetors were banned from oval tracks. So Holley, with a little “encouragement” from Ford crafted a new super-size fuel mixer. That “mystery carburetor” was a special sand cast job complete with massive (for the time) two-inch diameter throttle bores. Given this considerable size increase over a conventional carburetor, the base plate mounting pattern was expanded from the more familiar 4150 series Holley carburetors. The basic fuel bowls and metering blocks resembled those found on the 4150 series carburetors and all Dominators made use of dual accelerator pumps. The throttle linkage joining the primary and secondary throttle plates of the carburetor was mechanical in design but rather than making use of an external side mount linkage, the Dominator made use of a unique linkage arrangement buried deep with the main throttle body.

Fords fitted with the new mystery carburetor met with immediate success on the high banks of NASCAR. Holley’s stunning achievement was clearly perceived as an “unfair advantage” and it was soon banned forever. But the old mystery carburetor configuration never went away. It found a home in drag racing. Here, racers picked up on the carburetor and before long, it became standard equipment on virtually every “ultimate” gasoline-fueled racecar within the straight and narrow ranks. Just how dominant is the Dominator? It’s been used on pretty much every winning Pro Stock car since 1982. That’s one formidable record.

Holley’s Dominator is commonly used in pairs in the Professional racing ranks, but over the years, they have seen use in single four barrel format, they’ve been sliced in half (creating an enormous two barrel), they’ve been tweaked, bored, polished, and otherwise modified considerably from their original configuration. Likely no other component in motor sports, with the possible exception of cylinder heads has seen such a modification frenzy. Holley hasn’t been standing still either.

Over the years, the folks at Holley definitely fiddled with the Dominator (and so have countless carburetor modification shops). There have been all sorts of incarnations. In production form, it has ranged in airflow capacity from 750 CFM all the way to over 1400 CFM. Countless varieties have seen the light of day, but very recently, Holley engineers completely revised the big 4500 series carburetor. They took the best of the modifications racers were performing, enhanced those modifications and completely rebuilt the lineup. The new “mystery carbs” are incredibly sophisticated (and extremely user friendly) devices.

The brand spanking new Dominators are now manufactured from aluminum. Using aluminum instead of zinc dropped the weight of each carburetor by 3.8 pounds. The main body is 5/16-inch taller than earlier Dominators too. The additional height allows for a larger (smoother) radius entry for air. Holley engineers used Computation Fluid Dynamics Software to come up with the configuration. The venturi throat to throttle bore segment in the main body is fully machined. Holley has also included the nifty through-the-carb-stud idle bypass valve system (also seen on the new Ultra 4150 carbs) – more later. Holley points out that fuel enters the main body through a set of billet boosters with 12-hole inserts. This provides for superior atomization, which in turn makes for crisp throttle response. A new modified-skirt booster is used on the larger CFM models in order to maintain a strong fuel signal. To keep up with today’s electronics, Holley has included a throttle position sensor mount on the body (a sensor is available separately). What that means is Holley has made it easier for owners to include a data acquisition system in the car. Finally, a set of integrated air scoop mounting bosses is also new to the Gen 3 Dominator main body. You can still (of course) use a regular stud mounted air cleaner. 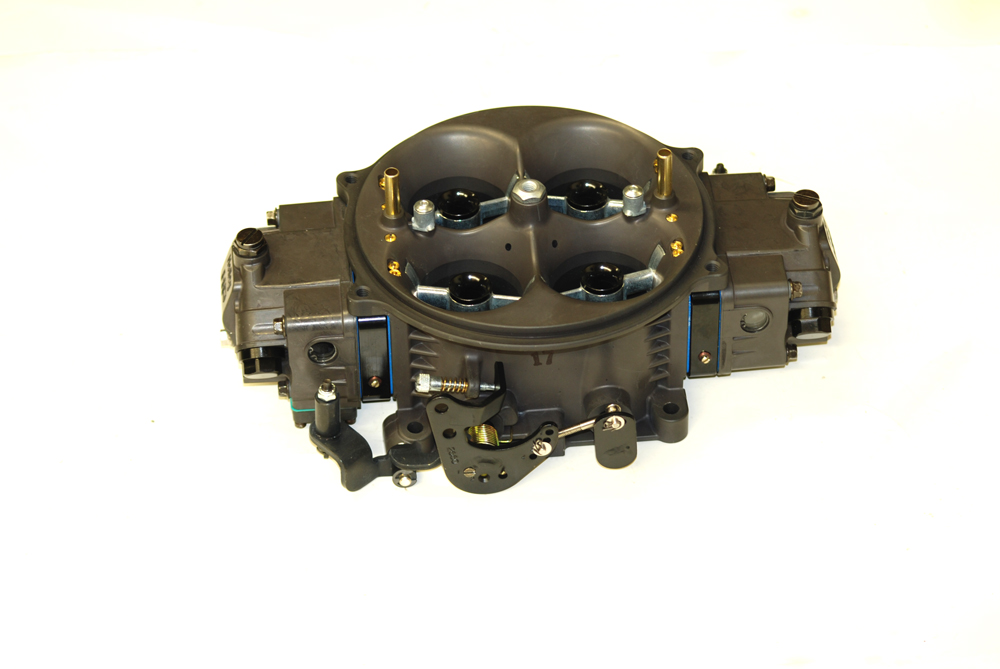 Dominators of old were fitted with an internal secondary linkage arrangement, where the components were mounted between the respective throttle bores. With the new Gen 3 Dominator lineup, the linkage is all-external and tuning is incredibly easy with threaded secondary links to adjust from 1:1 to soft progressive. In total, the Dominator linkage allows for four different secondary opening rates – softer progressive, intermediate progressive, progressive and 1:1. You can set them all by way of numbered holes on the primary throttle arm. And like the smaller 4150, the curb idle screws are knurled (no tools required), which allows for quick adjustments without a screwdriver.

Next issue, we’ll take a closer look at the revised air bleed arrangement as well as other details. Bottom line here is, it’s a super interesting carburetor filled with racer-friend features. Watch for the next segment.