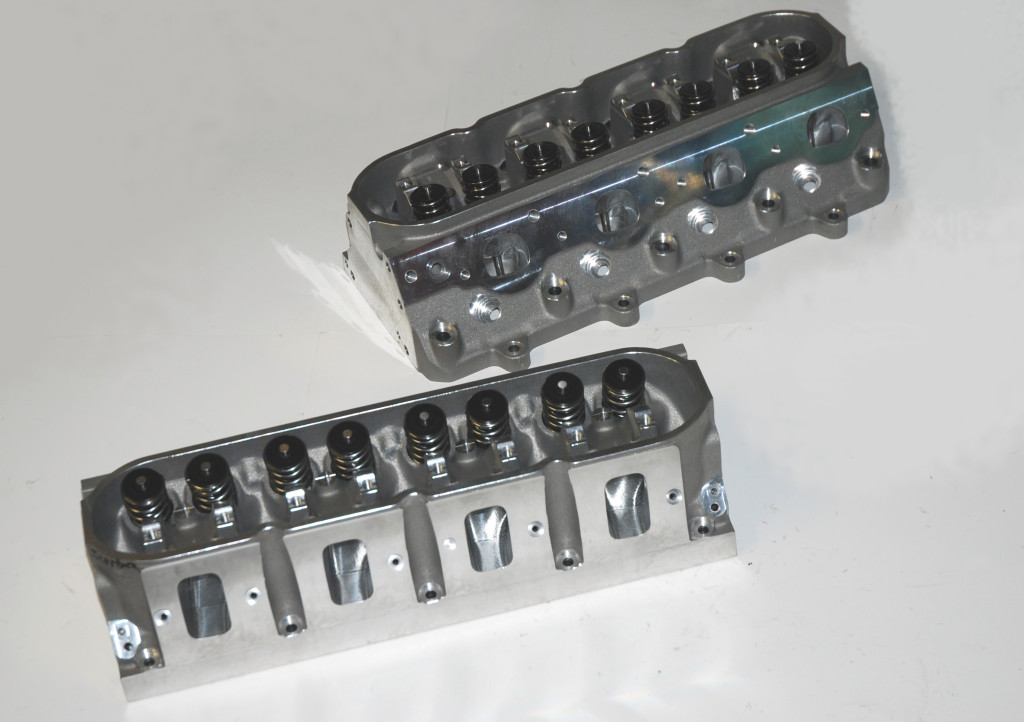 When Chevy’s LS motor made its debut almost two decades ago, there were plenty of doubters. It was the new kid on the block and for one thing, the first ones had goofy looking intake ports – tall and skinny. We hadn’t seen anything like it. But time marches on. After riding in, driving, and owning LS powered cars and trucks, most of us discovered it was pretty clear something good was going on under the hood. Later jobs with bigger ports were even better. Those little LS engines packed a punch. A big part of that punch was in the cylinder heads. And that’s the reason for this series. We’ll compare a very good, readily available LS head to some of the original standard bearers from both Chevy and Ford. You might be really surprised at the findings:

In this writer’s case, I happened to have a set of very (Very) nice CNC ported big block cylinder heads sitting on the workbench. They flowed like gangbusters from their 320 cc intake port. Better still, the heads had stock port locations, which meant all stock Chevy hardware (intake, valve train, headers or exhaust manifolds, front accessories) could bolt right on. Those rat motor heads were simply over-the-top. Then something happened: Brodix sent (for evaluation) a set of their latest LS cylinder heads based upon their take of the newer (larger) LS7 port configuration. The more we looked at the heads, the more we became convinced of the reason the LS really honks is because of the cylinder heads. And even more so when it’s topped with a set of Brodix BR-7-series heads. Believe it or not, they’re over the top in comparison to the big block. Here’s why:

On the intake side of the equation, Brodix’ BR-7 heads are based upon relatively small port volumes (although the port is short – more below) and [extremely] high port flow. That equates to considerable air speed in the port, without choking the engine in the usable RPM  ranges. sound confusing? Let’s back up a bit: Honestly, it’s pretty simple to get big flow bench flow numbers from an equally big hole (big port) in the head. The trouble is, if you just hog the head out, with no regard for the velocity within the port, the engine will be lazy – extremely lazy. In fact it will likely be a dog when it comes to acceleration. The trick is to maintain a relatively small poart layout and then make it flow copious quantities of air (and fuel). Makes sense, but there’s one tiny (albeit critical) caveat: You can’t make the port volume too small for the intended engine RPM range. If it is, you’ll simply choke the port. That means the engine will run out of steam at a specific RPM (likely well below the actual maximum engine speed or “redline”). As you can see, designing and building heads for street driven cars isn’t quite as easy as it might first look.

Those are the constraints Brodix was faced with when engineering this new series of cylinder heads (bolt-on, stock type hardware, extremely good flow, small port volume, realistic operating range). It wasn’t (and still isn’t) an easy assignment. As a result of the strict parameters, multiple configurations of LS-7 style heads were conceived. For this issue, we’ll concentrate on the intake port side of the equation. And there’s a lot to concentrate on.

The basic BR 7 head makes use of a 262 cc intake port. The valves measure 2.204-inches and the valve angle is 12-degrees (which is standard LS7-fare). This head also fits all standard LS7-format intake manifolds.

Next up is the STS BR 7 (shown in the accompanying photos). This Brodix LS style head is completely CNC ported, but still maintains the same 2.204-inch valve diameter as the basic BR 7 head. The port volume on the intake side measures 264-cc’s and it too has a standard 12-degree valve angle.

Now, when you’re comparing intake port volumes, give this some consideration:

492 small block castings were also common. They later became available as angle-plug, over-the-counter high performance replacement heads (never production line installed). Many consider them to be an improvement over the early 461-462-491 and 041 castings. They have an intake port volume of 157 cc.

As you can see, the Brodix BR 7 head series has an intake port volume that is closer to an oval port rat motor than a small block. There’s a wee hitch in the comparison though: The big block has a long intake tract with a couple of convoluted ports. The LS motor is a symmetrical port arrangement (with all ports being equal). They have direct paths right into the combustion chamber. As a result, the ports tend to be shorter than their big block ancestors.

So far so good, but just how much “air” do these cylinder heads move in the intake port? What follows is a flow data in cubic feet per minute (CFM) collected from Brodix, using a baseline figure of 28-inches for comparison purposes:

OK. Those are impressive numbers. But how do they compare with a stock Chevy small block or big block port? We gathered up data on a number of different stock small block and big block engines, using figures known to be reliable. The differences in flow might surprise you:

It doesn’t take a rocket scientist to see that the Brodix BR 7 series heads move a ton of air in comparison to a conventional small block. In fact, they move way more air than a good stock big block.  But wait!  Remember that really (Really) good set of heads we had on my bench?  Those are actually Brodix STS RR models with a transposed, CNC-machined BB-2 port.  They’re likely one of the best heads available today that you can bolt-on a conventional big block.  That means that everything from the intake to the exhaust from a stock Chevy fits (including the valve train and accessories).  How well do the 320-cc intake ports flow?  Here’s the answer:

Now compare them directly to the STS BR 7 heads we also had on the work bench:

Gulp.  That big block doesn’t seem so stout any more (especially when you consider the BR series head has an intake volume of 264 cc’s).  That’s one big reason why these cylinder heads can make your head spin! For a closer look at the intake side, see the accompanying photos.  Next issue, we’ll look at the exhaust side of the equation.  Hang on because they have some surprises too! 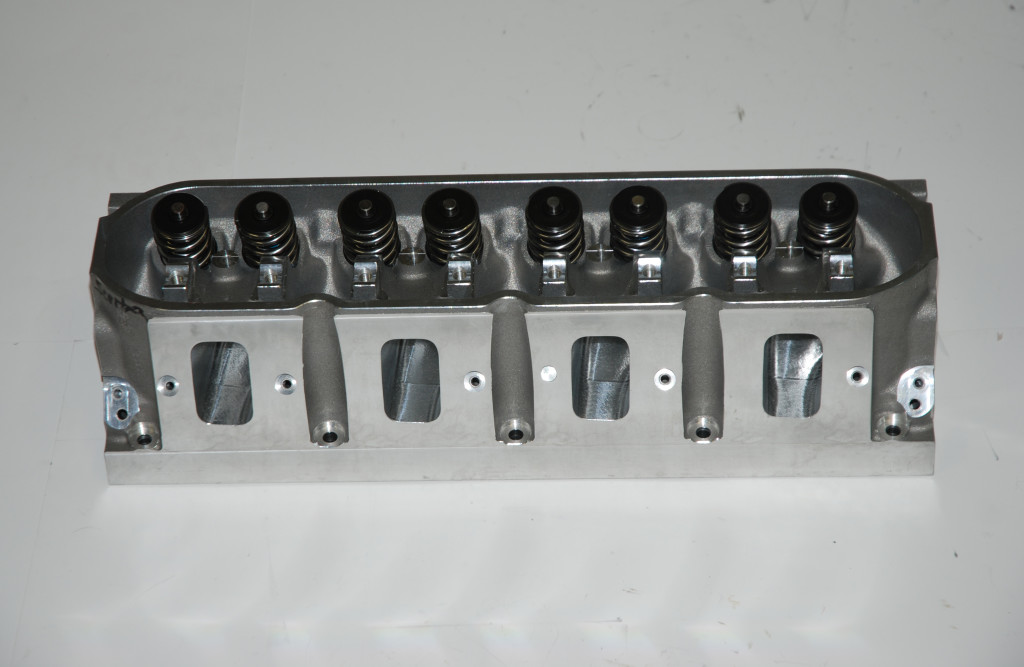 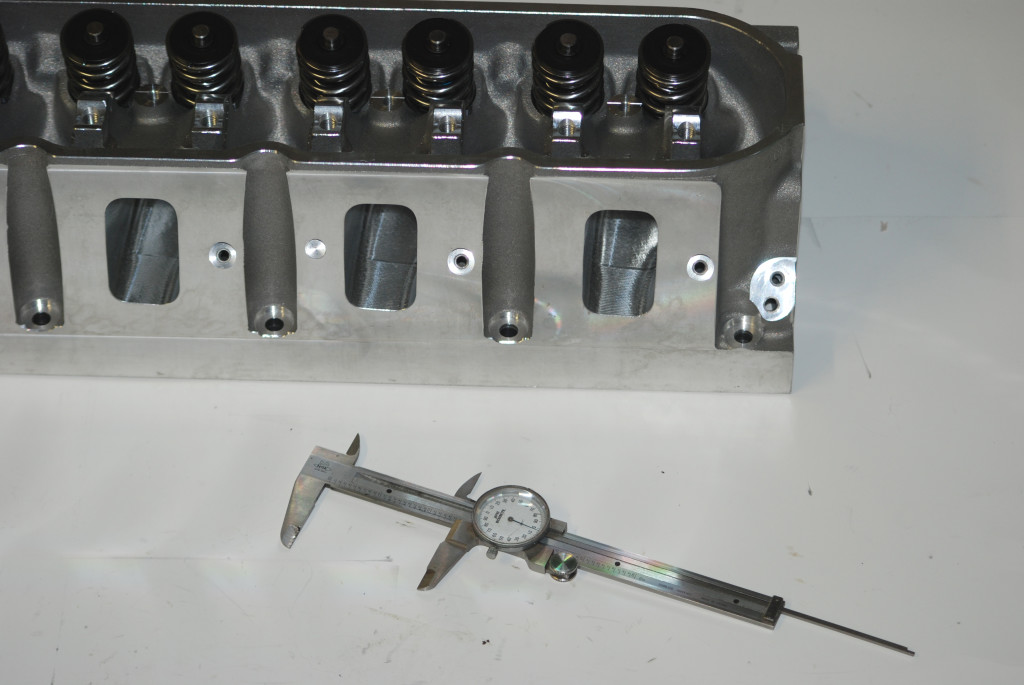 3 Comments on Brodix Heads – Part I