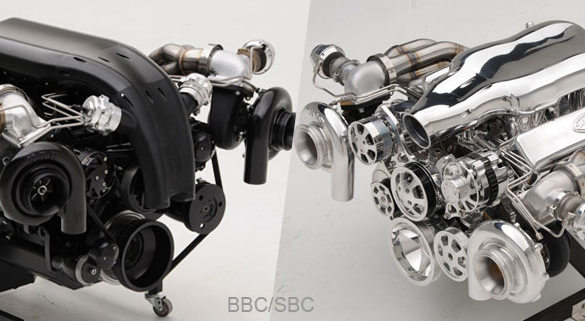 You’re all ready to stuff a huge V8 into your little Honda Civic and now you need parts.

In this day and age, it’s easy to go grab some late model engine and transmission from a local wrecking yard. There are lots of great power-train combinations available, some that you can even pull yourself. You’ll surely run into issues with all the computer controls, reliability, and negotiating a reasonable price but those things are still manageable. But, of you are planning a rat-rod or just something to putz around with, used junkyard engines and transmissions might make the most  sense.

For a reliable swap, it pays to choose quality parts. A good swap should be as durable as a factory car and offer a lot of fun per dollar for the owner.

Here I cover a few sources for quality engines, parts, and accessories. You’ll find mild to wild in this list so there are a lot of options. The age old saying still holds true, “Speed costs money, how fast do you want to spend.”

The Chevy Performance site has every kind of go-fast Chevrolet part you can imagine. They have a little 326 HP, 327 cu. in. aluminum small-block called the E-Rod LC9, that runs on 87 octane pump gas. Retail prices start at about $7750.

Advance Adapters has been around for a couple of decades and primarily caters to the 4-wheel drive crowd. They offer transmission conversion kits, engine mounts, and cross-members. Perhaps, you’d like to add 4-wheel drive to your 1962 Chevy station wagon along with a healthy 454. No problemo, Advance Adapters has a transfer case and trans adapter that will bring everything together.

Engine Swap Depot is a blog with a tag-line that says it all…“Boosting Performance Through Creative Surgery”. The site posts current engine swap stories and aggregates a bunch of links for parts and resources.

For the ultimate in horsepower, Nelson Racing Engines is your ticket. They custom build just about any combination of engine you could envision. They produce some of the most insane turbo engines on the planet, typically 500+ cu. in. displacement and upwards of 2000 HP. Nelson has spent the last decade engineering fuel systems and rotating assemblies, that will live reliably at those levels of performance. The vast majority of their focus is making their motors smooth enough for the street, while still turning in crazy numbers at the strip.

You’ll certainly want to visit the Web site because part of their pitch is their extensive video series. They film everything from the 572 in a 1964 Impala, to the twin-turbo 427 small-block, wheel standing sand rail, to dyno runs of their 2200 HP “Dynodestroyer”. A couple of years ago, they had to get a bigger dyno, because the old one only went up to 2000 HP. Of course, their top-of-the-line motors are $50,000 plus. On balance, their super-reliable, 750 HP, 572 big-block starts at around a very reasonable $15,500. For a hot rodder, to say the videos are inspirational, is an understatement. Make sure you check them out.