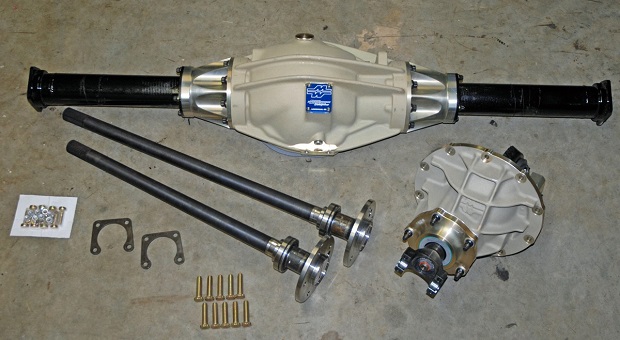 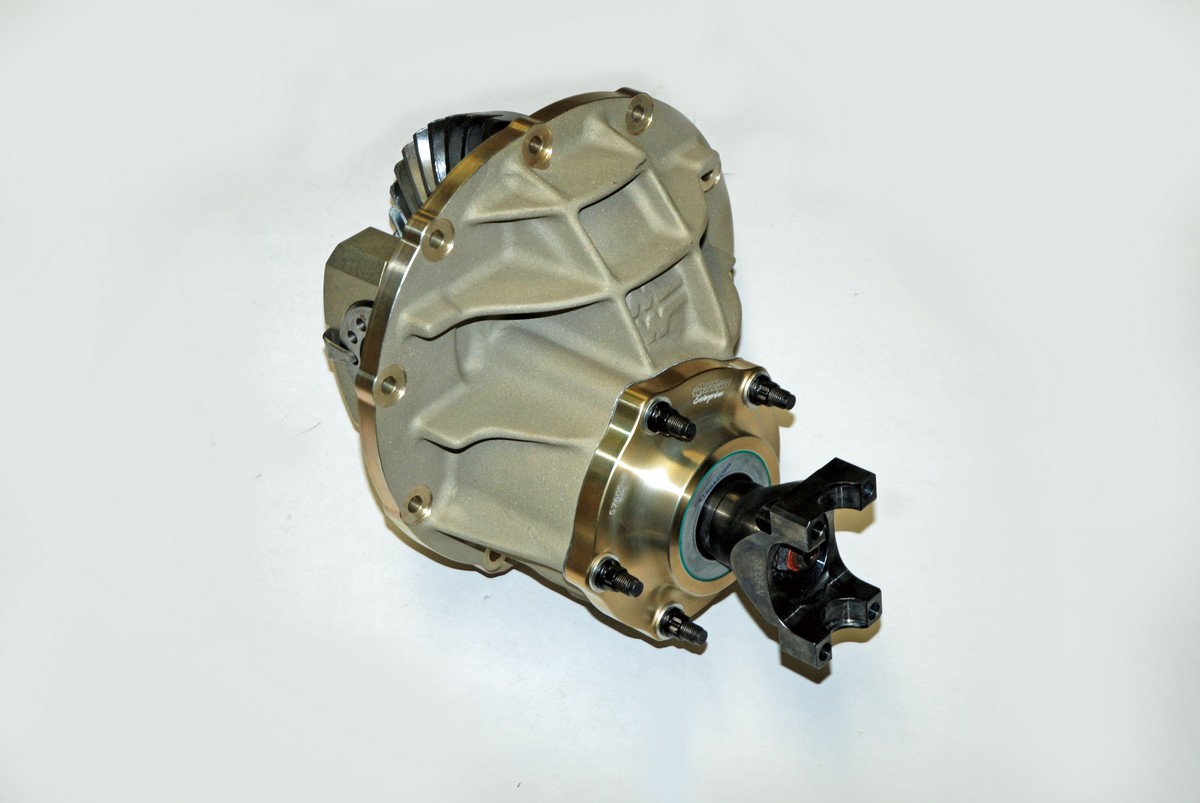 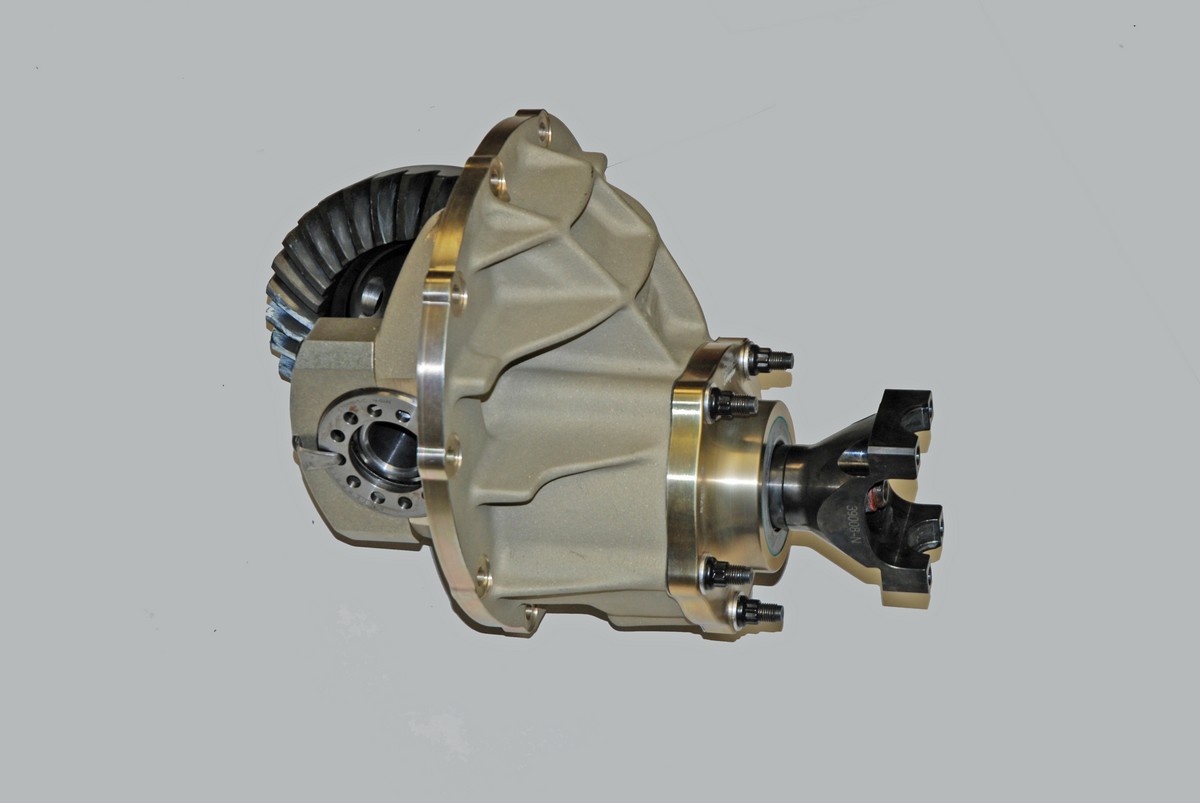 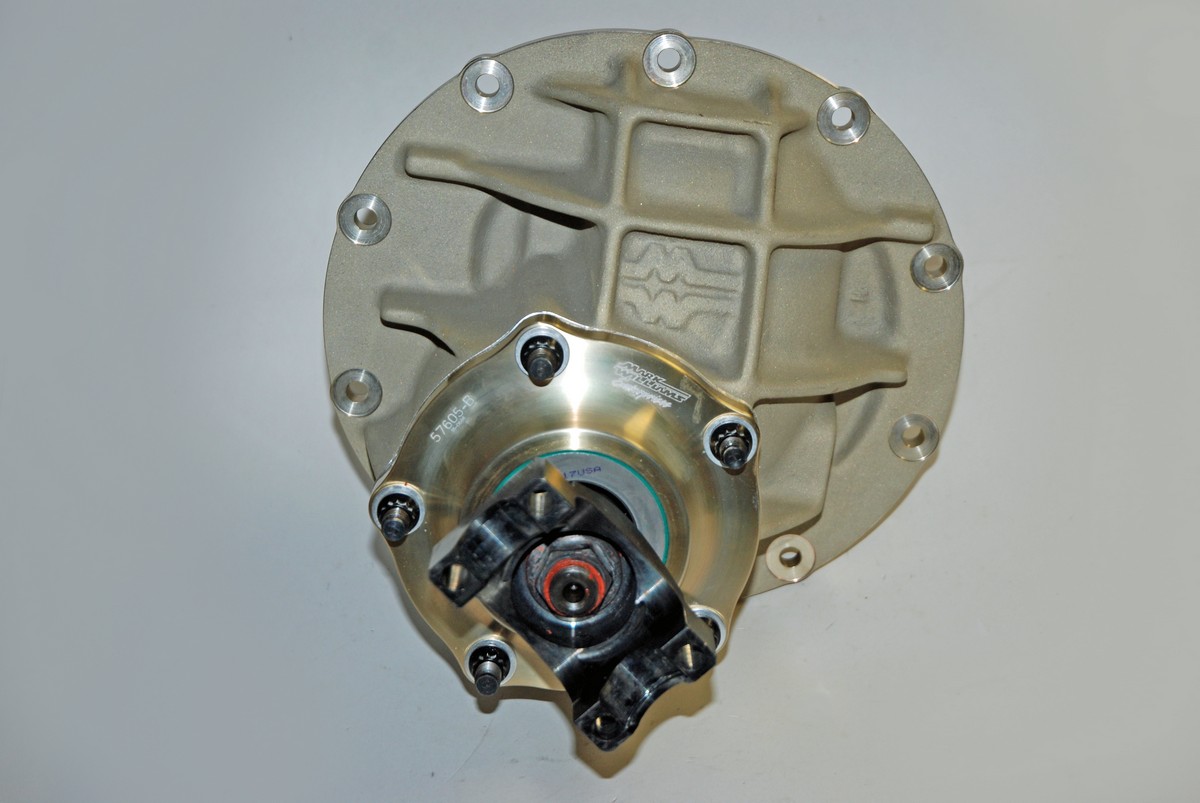 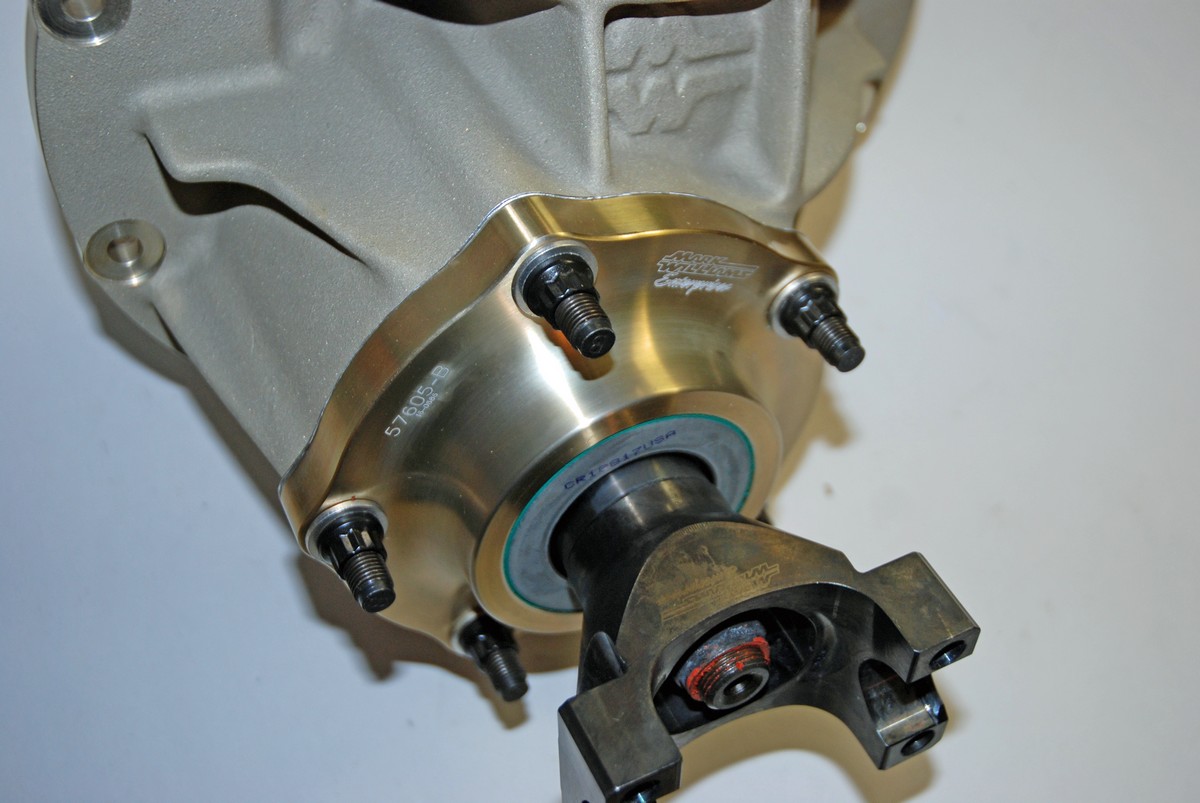 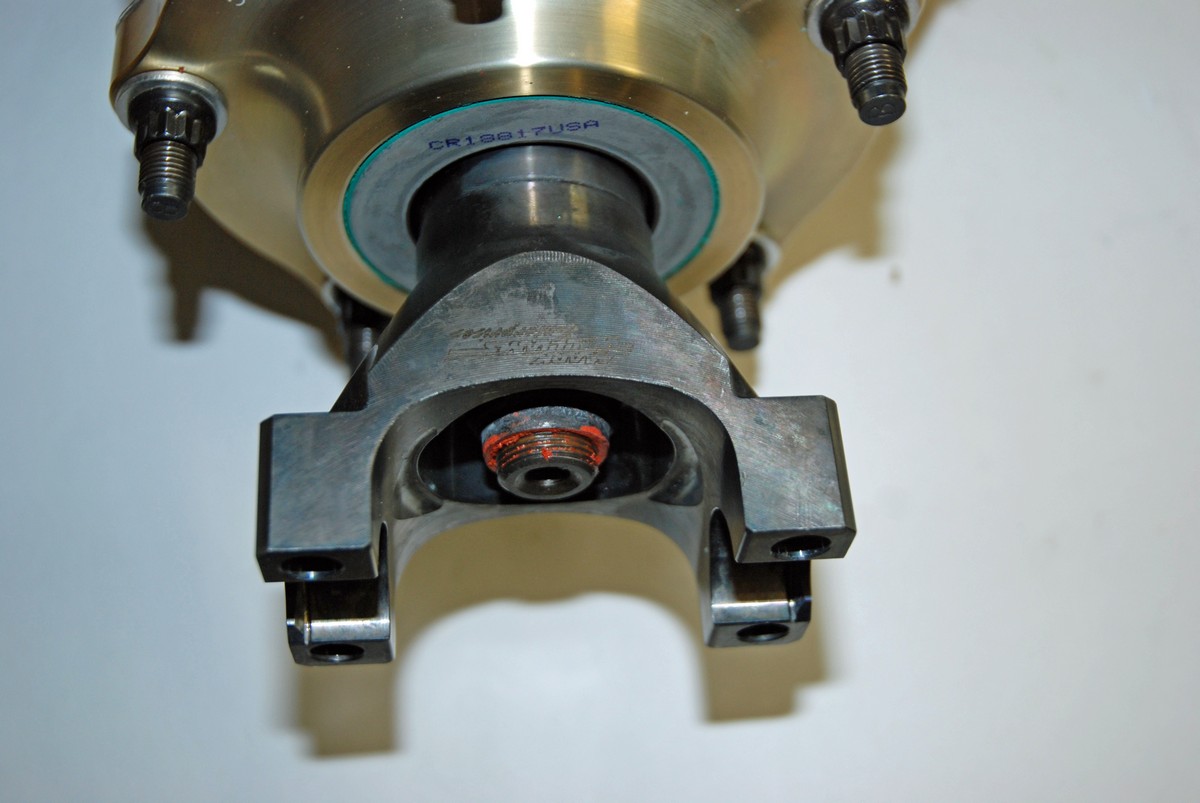 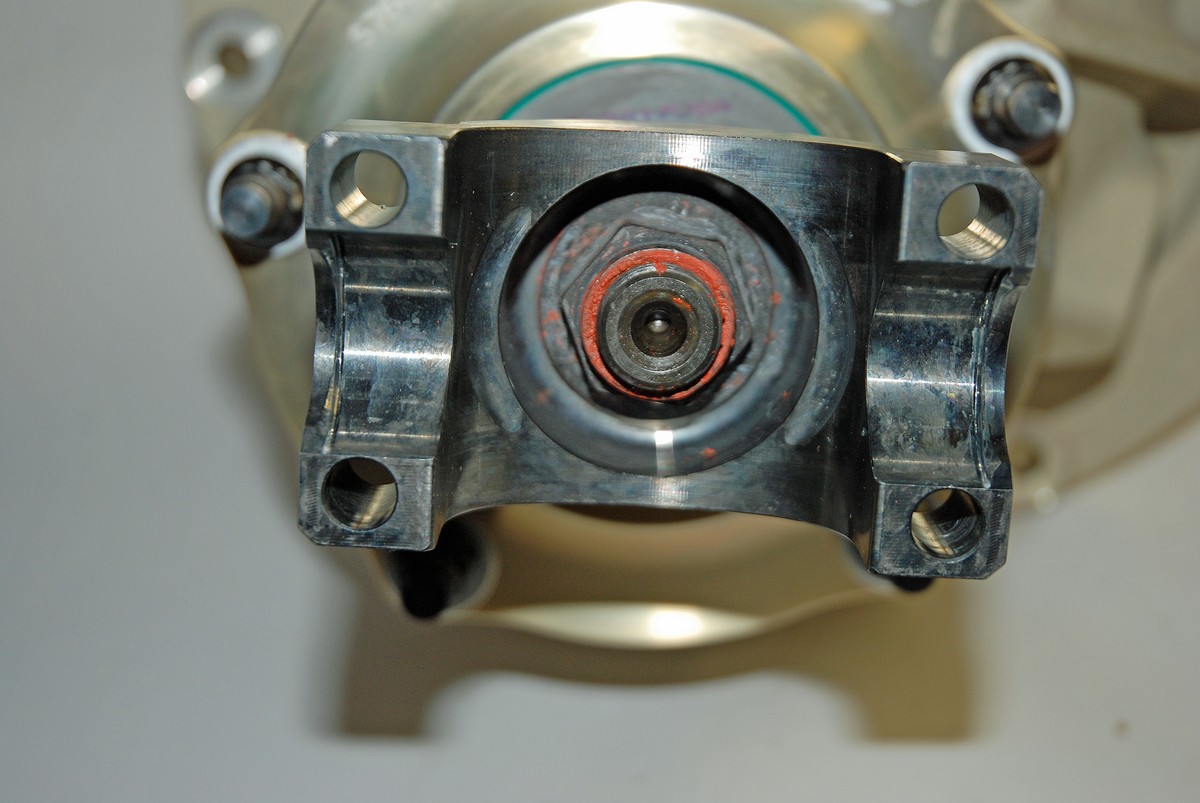 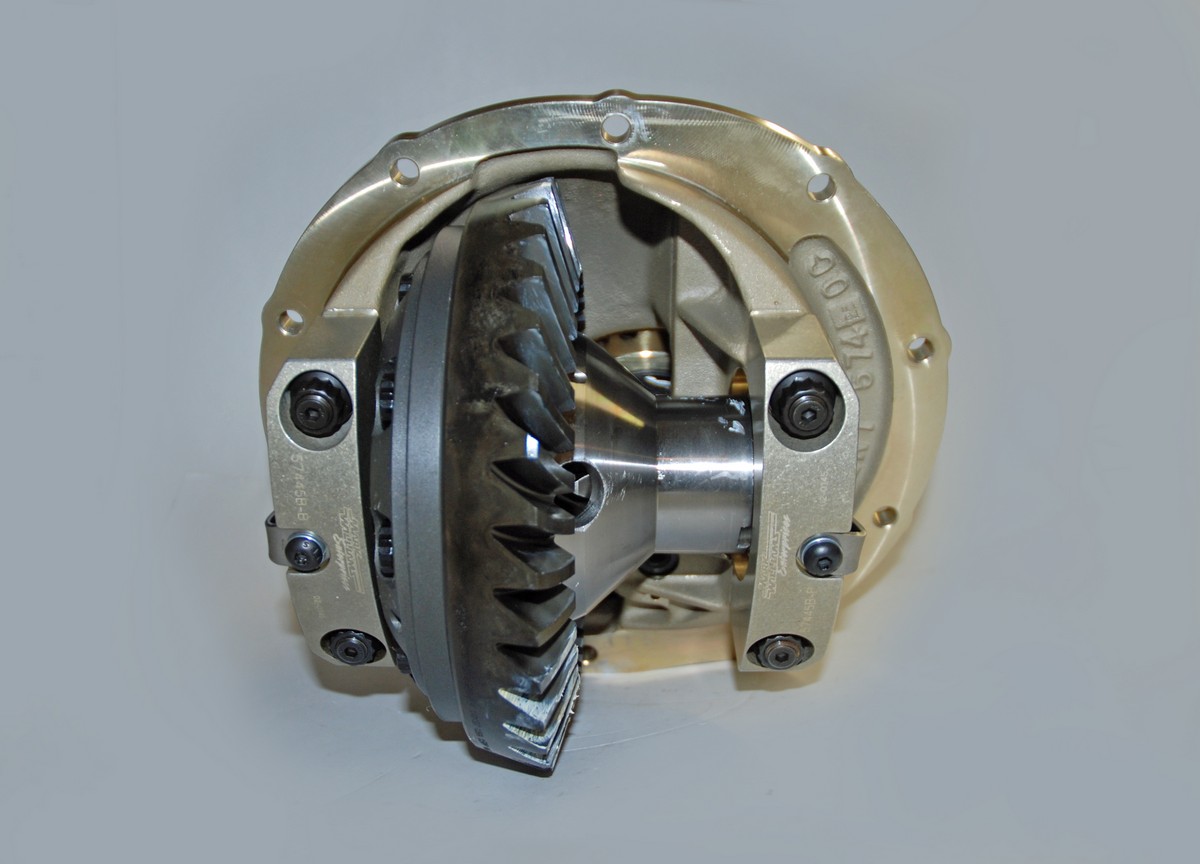 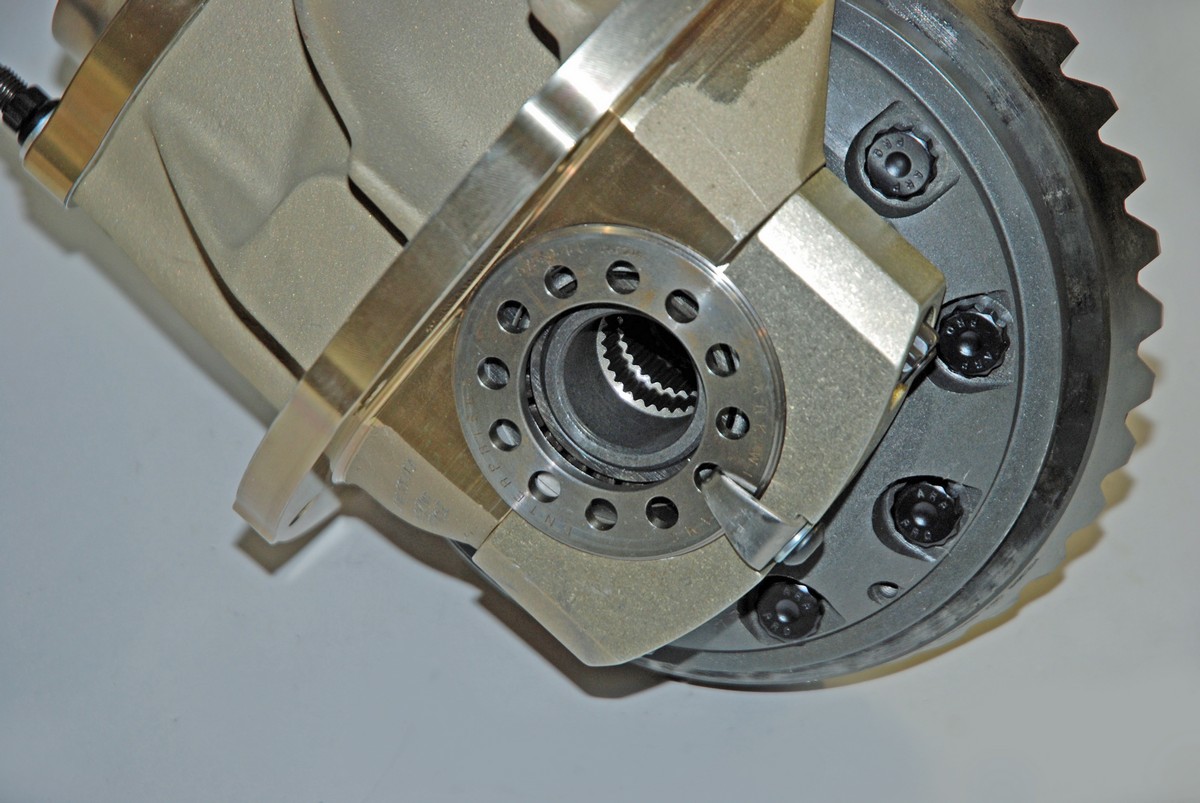 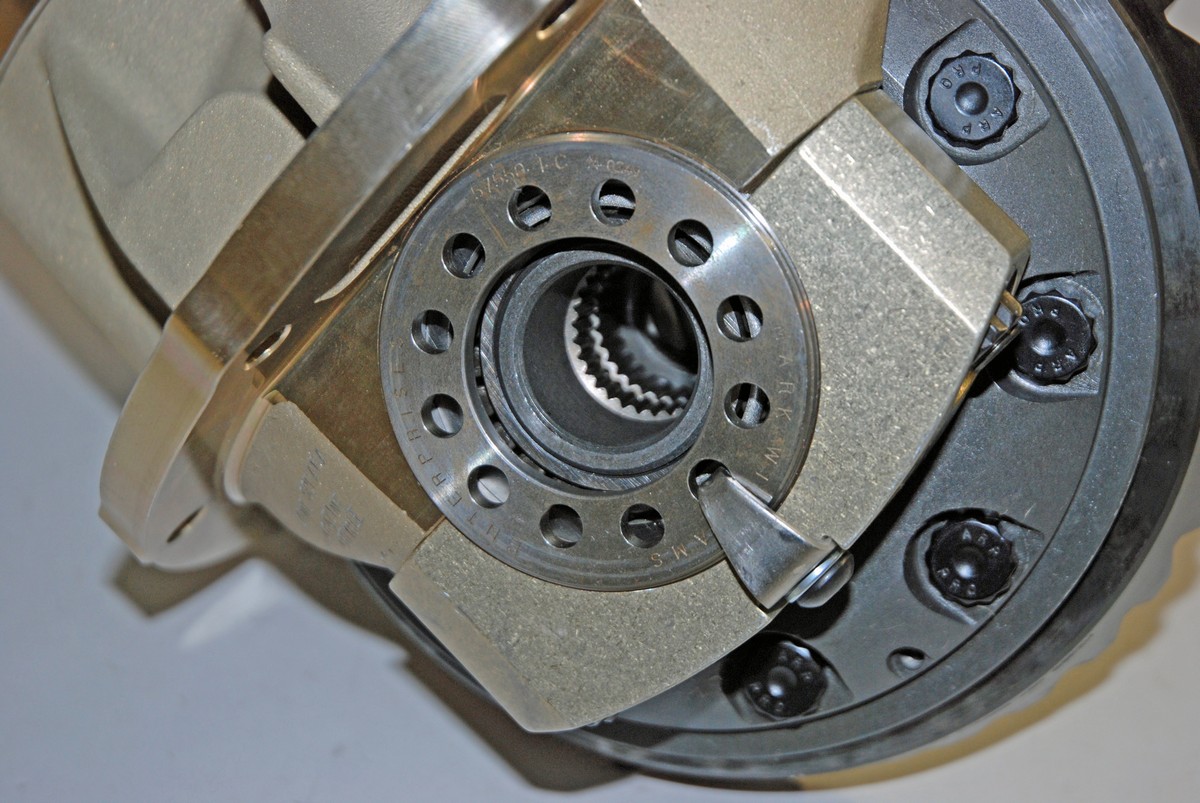 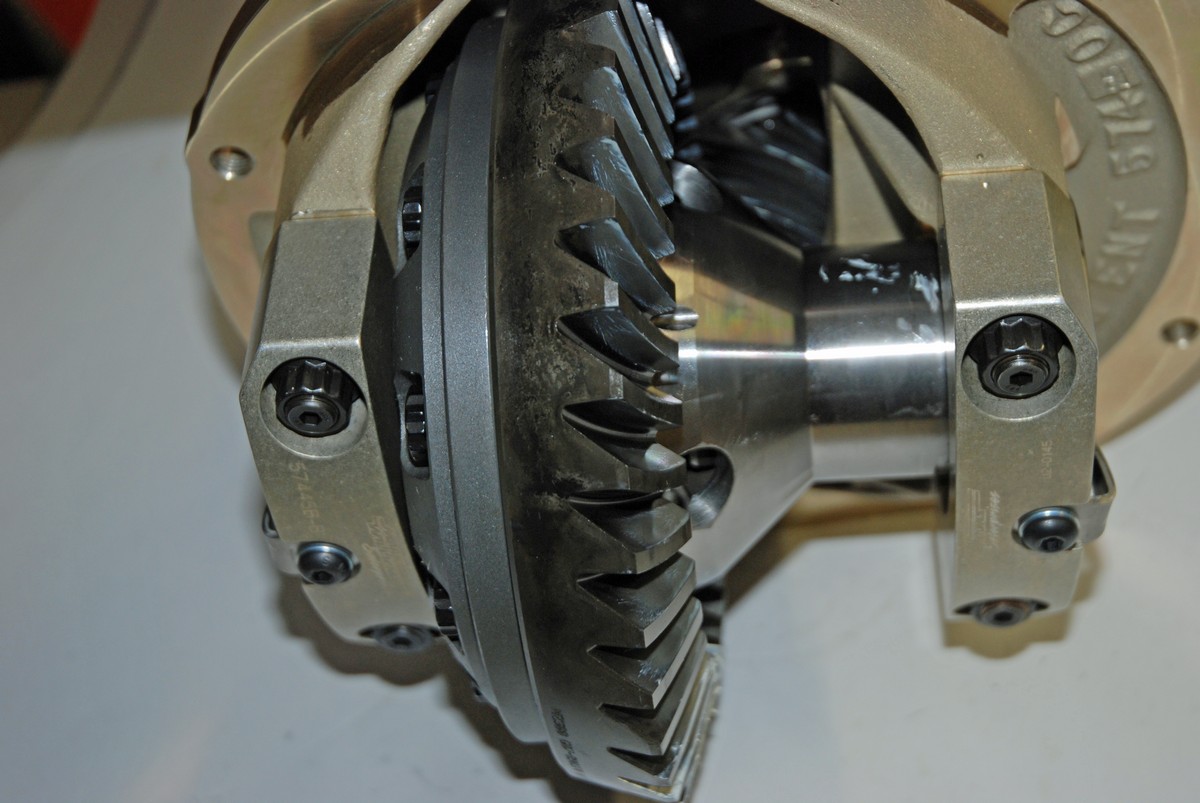 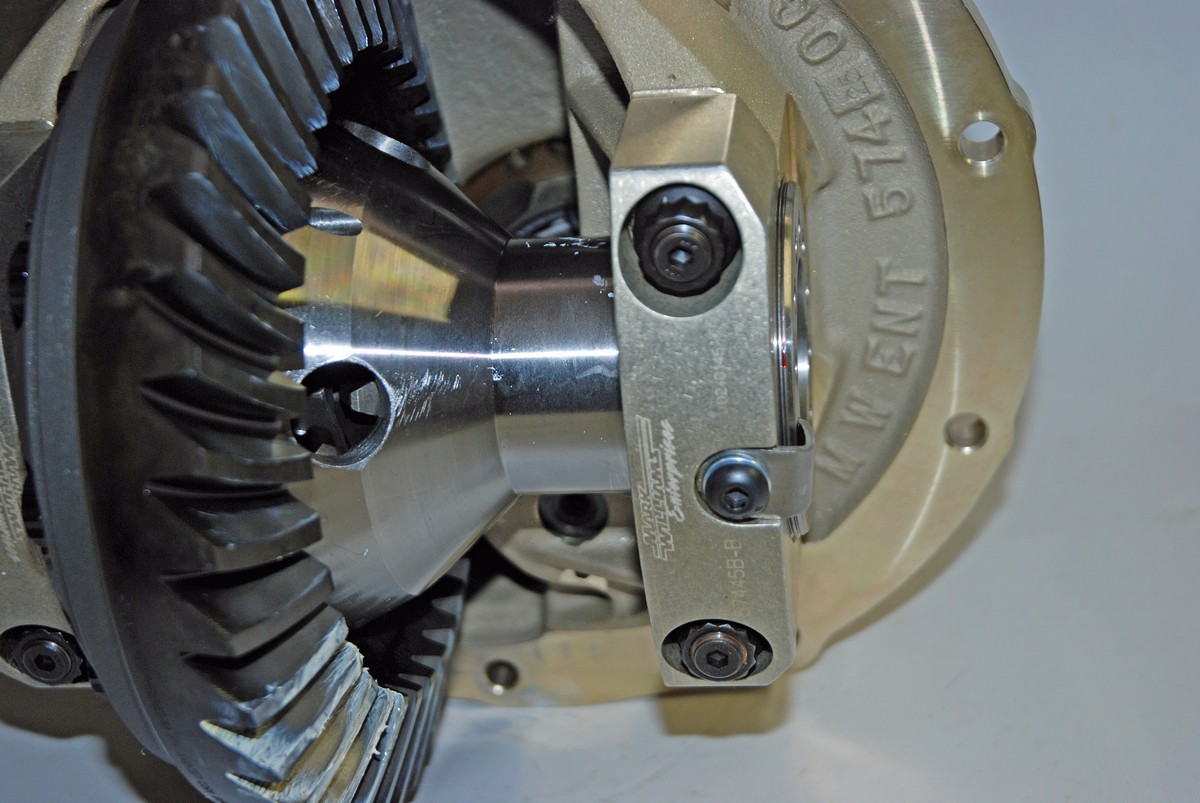 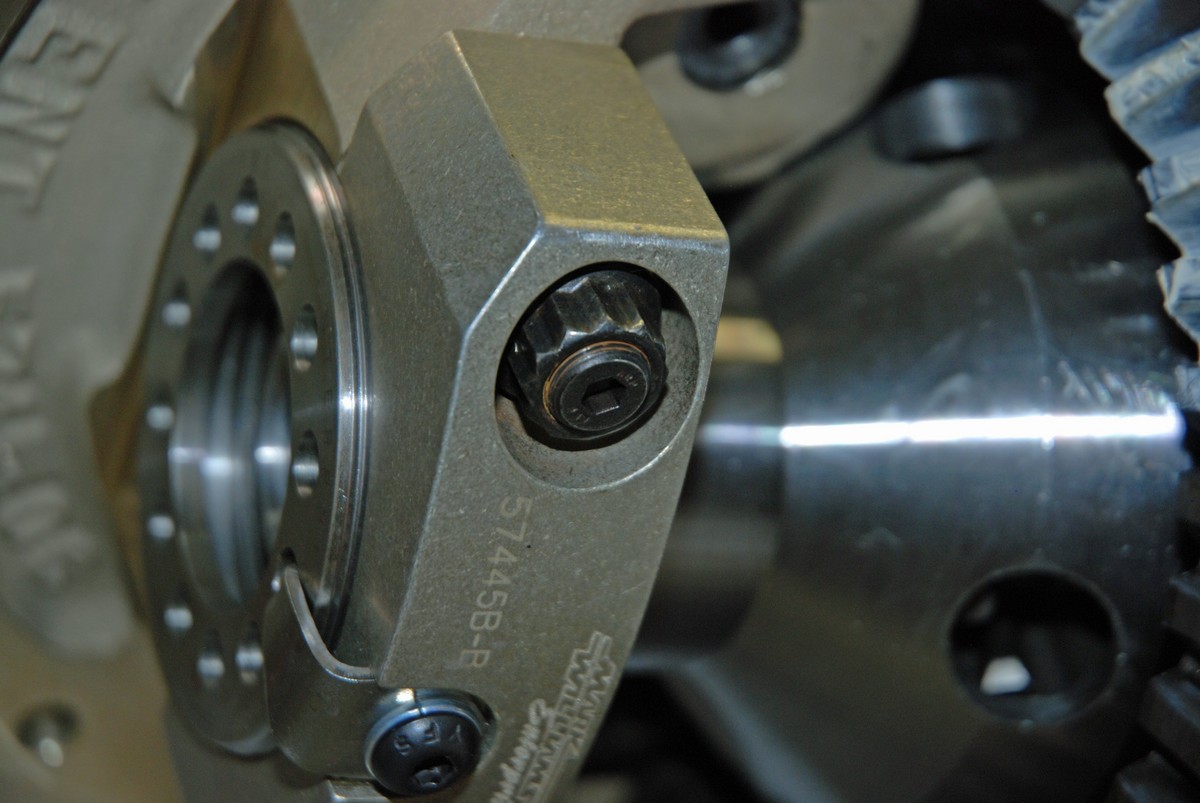 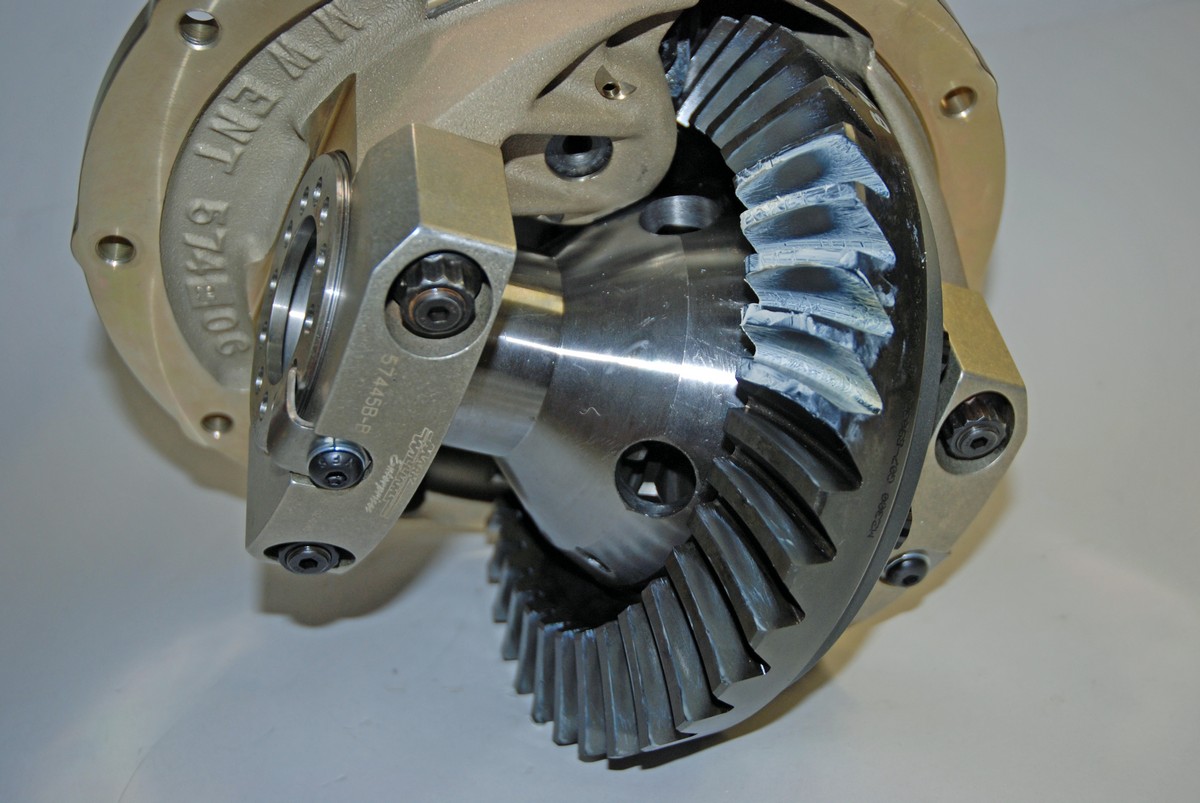 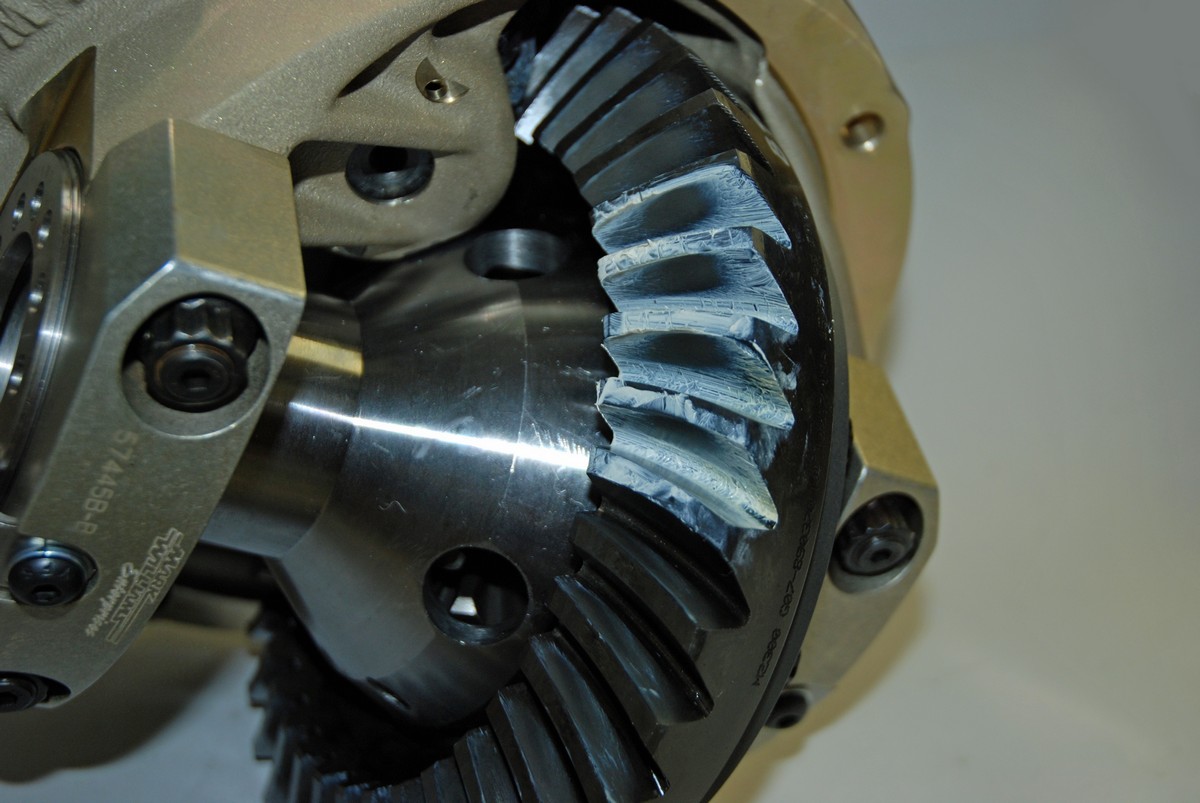 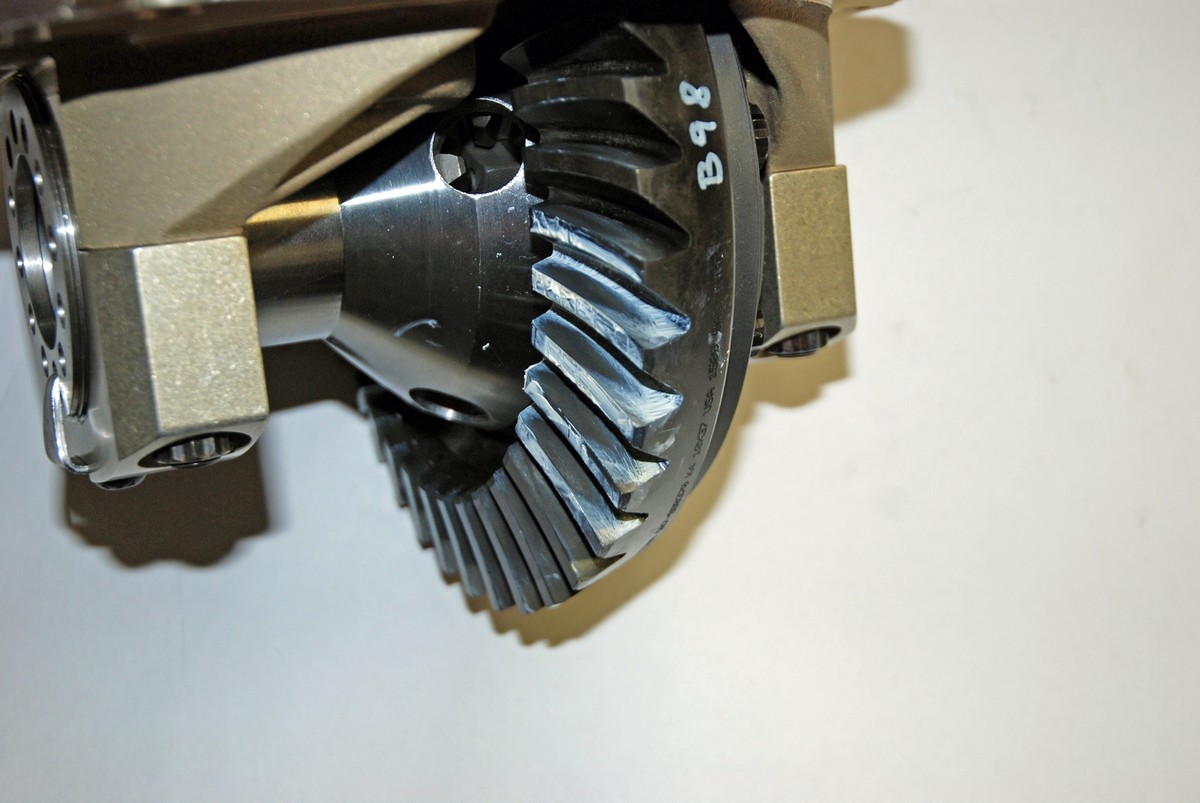 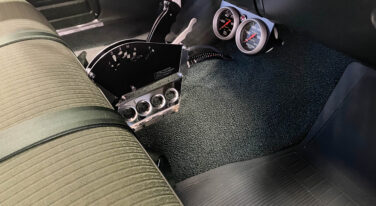 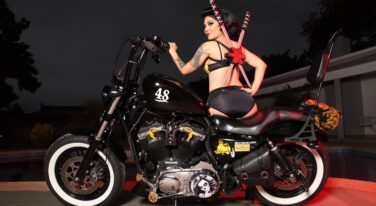 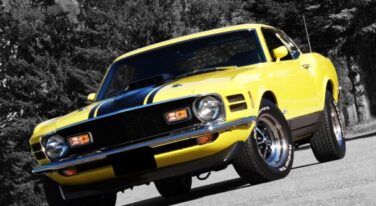 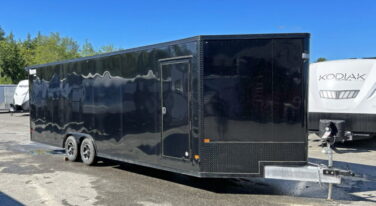 In the past couple of issues, we’ve taken the time to dig deep into the world of Mark Williams Modular 9-inch rear end assemblies. This time around, we’ll look at the center section. Now, if you’re a regular reader of these pages, it should come as no surprise that M-W offers a wide range of Ford 9-inch third members. They begin with nodular iron jobs and end up with Pro Stock capable assemblies. In truth, there’s a lot of choice. In fact you can order just about anything on a Modular 9-inch.

For the hot rod rear end shown in the accompanying photos, M-W took a middle-of-the-road approach. It began with a street rod aluminum case. This case weighs 11 pounds less than M-W’s comparable nodular iron carrier or a stock Ford carrier. These cases are cast from an ultra-strong aircraft alloy that is 30% stronger than 6061T6.

The main caps incorporated in the assembly are machined from 7075 aluminum and include billet steel carrier adjusters (shown in the accompanying photos). The pinion pilot-bearing bore incorporates an extra length bearing that is completely captive and retained by fasteners. Meanwhile, the pinion support is held in place by way of large diameter 7/16-inch studs. The case is manufactured in two different bore sizes (3.062-inch and 3.250-inch). The case is also set up to accept a load bolt should one be required. What’s a “load bolt?” A load bolt is positioned in close proximity to the backside of the ring gear, but not in contact with it. It only makes contact with the ring gear if there is deflection under severe load. Load Bolts were originally used on heavy-duty truck differentials. They prevented chipped teeth if the driver’s foot slipped off the clutch when backing up. In the end, a load bolt might be helpful in extreme (very extreme) power applications, but for a street machine or street rod application, it’s just not necessary.

As far as the carrier is concerned, there are three basic options available: spool, Positraction and locker, and of course, a series of variants in each (we’ll get to that in a bit). We suppose you could order it with an open carrier, but honestly, this isn’t really a performance choice. For this application (high performance street machine, street rod), it’s hard to beat a good old-fashioned Positraction setup. In terms of operation, a Positraction setup is similar to an open carrier and uses a set of clutches to apply torque to both axles. The clutches are pre-loaded by way of springs and the separating action of the spider gears increase the pressure on the clutch discs. In terms of operation, a Positraction differential is quiet and smooth (in contrast to something like a Detroit Locker).

On the nose of the M-W hot rod 9-inch third member, you’ll see it incorporates a billet pinion support. This example is a 28-spline version, designed for use with street gears. The support housings are CNC-machined from aircraft quality aluminum and, in this case, incorporate oversized tapered roller bearings (low friction angular contact ball bearing pinion supports are also available). The bearing pre-load is set by way of a solid hardened pre-load spacer rather than a crush sleeve or stack of thin shims. The spacer is factory machined to the required pre-load for each assembly.

For a street application such as this, the third member is assembled with 8620-steel street gears. Pro gears, on the other hand, are manufactured from 9310-steel and then heat-treated. It is a softer alloy than the 8620 street gears. The softer 9310 alloy allows the gear to absorb the higher impact loads that are generated in drag racing without developing cracks. A harder 8620 street gear could shatter under the same loads; however, the 9310 alloy gears will wear much faster – not a great idea in a street-driven car application. Finally, M-W offers an extremely large range of choice for 8620 gears for street applications. They range from 2.91:1 all the way up to 6.50:1, with approximately 32 steps (different ratios) in between! Our sample third member is set up with a 3.70:1 gear set.

Like other parts of the third member, there all sorts of different pinion yokes available, including 4340 steel and 7075 billet aluminum examples. On the street, it’s tough to beat a steel 4340 forging. They’re designed to accept a heavy duty Spicer 1350 universal joint or an even larger 1480 Spicer joint. For a street rod or street machine, a Spicer 1350 universal joint is more than adequate. Mark Williams has engineered special tooling to ensure that the yoke is machined concentric to the pinion spline in order to provide for smooth operation. And by the way, the street gear mandates a 28-spline pinion yoke.

Next week, we’ll wrap up our look at Monster Modulars with an in-depth look at the MasterLine axles M-W uses in their package. Watch for it!
There are all sorts of third member options for the M-W Modular 9-inch. This example is a street machine/street rod setup based upon an aluminum case. More in the next photos:
The case for the street rod housing is cast from an ultra-strong aircraft alloy that proves 30% stronger than 6061T6. The case is approximately 11 pounds lighter than a comparable nodular iron piece.
On the nose, the third member is fitted with a billet pinion support. M-W pinion supports are CNC-machined from aircraft quality aluminum and, in this case, incorporate oversized tapered roller bearings.
As you can see, the pinion support is affixed to the case by way of aircraft quality 7/16-inch studs and 12-point nuts.
Up front, M-W fit this third member with a billet 4340 steel yoke engineered for use with a Spicer 1350-series universal joint.
1350 universal joints are significantly stronger than (smaller) production line 1310-series u-joints.
At the rear of this third member, MW incorporates a set of billet caps, a 3.70:1 street gear and a Positraction differential.
Rather than shims for the carrier, the M-W 9-inch setup uses a form of side adjuster. Shown here are the heavy-duty billet steel adjusters Williams uses in their racing and street-strip cases.
The design is such that the adjuster is positively locked in place.
These photos provide a closer look at the billet caps fitted to the case.
M-W machines these from 7075 aluminum.
The caps are held in place by way of aircraft quality studs and 12-point nuts.
This particular third member is fitted with a Positraction differential. All sorts of options are available for differentials in the M-W Modular 9-inch; however, for street use it’s tough to beat the smooth operation of a posi unit.
As pointed out earlier, this Modular third member is equipped with a street-friendly 3.70:1 ring and pinion.
As you can see, the pattern on the ring gear is pretty much perfect – a hallmark of an M-W assembly.
Back to Post