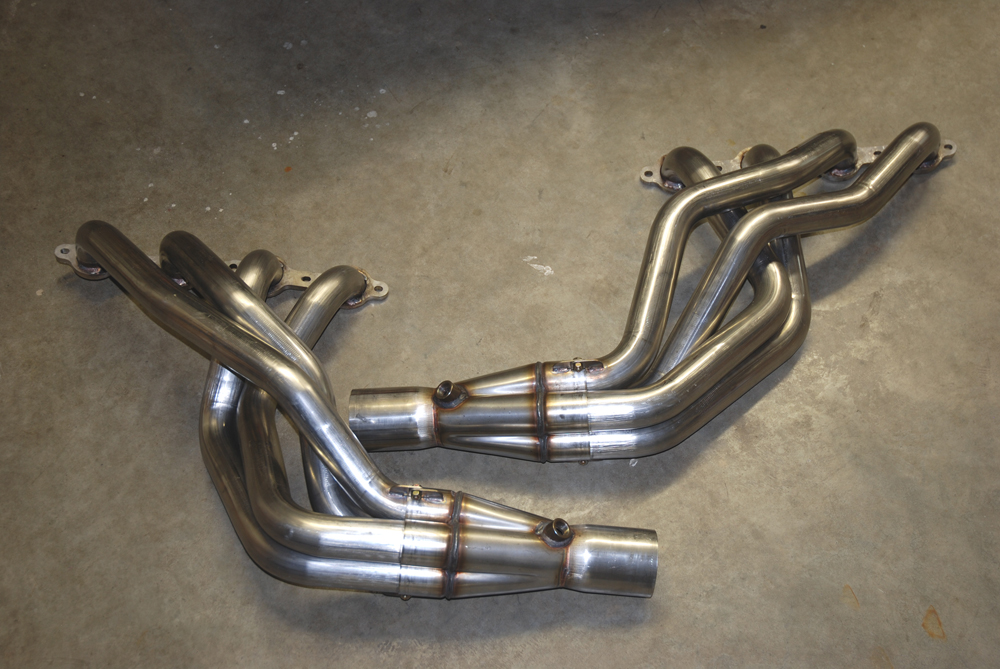 There are tons of questions when it comes to headers:  “What’s the real story with headers? Is header “tuning” a waste of time and dollars? Are equal length headers worth the money?  Does the collector shape and size really make a difference?  Do expensive headers really give you a performance gain for your dollar?”

Whoa!  Let’s start at the beginning:  According to the folks from American Racing Headers, a properly designed set of headers create a beneficial pressure balance between the intake and exhaust system. Here, “waves” of exhaust passing through the header pipes are more or less manipulated to extract the burned gasses from the combustion chamber and at the same time, assist in pulling in a fresh intake charge.

Typically, a manufacturer such as ARH will engineer a set of headers using variables such as primary tube diameter and length as well as collector length and diameter to use the engine’s natural pressure waves as an exhaust extraction “tool”.  Something that plenty of folks have missed is the point an engine benefits from two different forms of scavenging:  Inertial scavenging and wave scavenging.  And the design of a header can have an effect on both.

There are two types of scavenging in an engine – “Inertial Scavenging” and “Wave Scavenging.”  Inertial scavenging of gases begins as soon as the exhaust valve opens.  Here, exhaust gases move past the valve and exit through the exhaust port into the header primary tube (and eventually passing into the atmosphere).  Generally speaking, the experts feel that the best power is produced with an exhaust gas speed of approximately 300 feet per second (as an example, if an engine has a 36-inch primary tube, it would take 1/100 of a second for the exhaust “pulse” to pass through the tube).  Here’s a key to extraction:  When the exhaust valve is closed, these gases still continue to move down the exhaust tube at a rate of 300 feet per second.  As it travels down the pipe, the exhaust cools and actually slows in speed.  Behind this “pulse” is an area of low pressure that is expanding as the exhaust flows away.  Once the last of this exhaust gas reaches the end of the primary tube, the area of low pressure has increased in size to include the full length of the tube for that particular cylinder.

If the engine has no collector (for example, a one-cylinder motor or an engine equipped with zoomies) the exhaust enters the atmosphere once it has left the primary tube.  But in most headers, the exhaust enters a collector. If the low-pressure area we talked about above spills into another primary tube for a cylinder where the exhaust valve is just starting to open, the engine will gain an advantage.  That low-pressure “front” will help to pull exhaust gases from that cylinder (which at least to us, makes sense).  This means there is less residual exhaust gas remaining in the combustion chamber (which can foul the incoming charge of fresh fuel and air).  By manipulating the length and diameter of a specific tube, a header builder can influence the size of that low-pressure front.

What’s the story regarding the relationship between primary tube lengths versus unequal length headers (cheap fits-all headers) and/or zoomies? When it comes to cheap universal “fits-all” headers with seriously mismatched tube lengths, there can be as much as 50 HP difference between 5500 and 6500 RPM when compared to a set of pipes with more or less equal lengths.  50 or so horsepower is a good reason why primary tube length is significant.  Zoomies on the other hand will actually run pretty well in a couple of different power bands (typically from 3500 to 4500 and then again from 7000 to 7500 RPM).  But, they can give up something like 25 to 35 HP or more from 4500 to 7000 RPM (depending of course, up on the application – and we’re not talking about seriously supercharge blown alcohol or nitro engines here – we’re talking about normally aspirated engines).

Remember when we talked about how inertial scavenging helps to pull the exhaust out of the combustion chamber? This also helps to draw in the air-fuel charge, with the end result being higher volumetric efficiency. By varying the length of the primary tube, you physically change the time it takes for the vacuum pulse (low pressure area) to reach the header collector.  Essentially that’s what “tuning” header tubes is all about.  And this tuning can help to compliment the components you’ve selected for the entire car (camshaft, compression ratio, torque converter, gear ratio, tire diameter and so on).  Header tuning can also have an effect upon how the car works at a specific track, but we’ll get to that later.

Something else that is important is this:  When the speed of the engine increases, there the need for a long primary tube is reduced.  The reason is, there is, is less time between cylinder firing.  The low-pressure front we talked about has less time to travel to the collector.  The bottom line here is, primary tube length is something you really don’t want to gloss over.