The cylinder heads on your engine are designed to seal the combustion chambers and move gases from one side (intake) to the other (exhaust). How well a cylinder head does this basic task determines whether it’s good, fair or poor. There is a variety of numbers that cylinder head designers and manufacturers will throw at you in spec sheets, such as valve diameter, valve guide diameter, valve angle, port volume, combustion chamber volume and more. What do these numbers mean? RacingJunk is going to tell you, and then we’ll show you several heads side-by-side and compare their numbers.

No matter the material used, every head on the market today is cast. Unlike many other engine components, I can’t think of a single engine cylinder head that is forged. The biggest difference between cylinder heads is the materials used in the casting of the head. Iron and aluminum are the two major options. In high performance engines, aluminum is normally used because it’s lighter but still has much of the heat resistance of iron. If you’re racing, you want aluminum.

Shops will measure combustion chamber volume by turning the head over and installing two valves with oil or Vaseline on the sealing surfaces, followed by covering the combustion chamber with a perfectly flat piece of (usually) Plexiglas with a small hole drilled for the high spot in the chamber.

They then carefully fill the volume created with something like denatured alcohol from a graduated container until it reaches the bottom of the drilled hole. The volume of liquid that has been poured from the graduated container is the chamber volume. If you’re buying a new head, these calculations will be made for you.

The shape and size (numbers D1 and D2 above) of the head’s intake and exhaust ports will determine the intake and exhaust manifolds that are used, because they have to match as closely as possible in order to not play havoc with the air-fuel mixture’s flow into and out of the cylinder.

Note: It’s important to remember one important thing when it comes to port shaping and sizing. Like a carburetor or injector, bigger isn’t always better. Sure, a bigger port has more volume for airflow, but the speed of the airflow through the port is almost as important as how much air flows, especially in street performance applications. Lots of air flowing slowly into the chamber isn’t going to do much for power output. A little less air flowing faster will make more power. The proper balance needs to be struck here.

Stick an intake manifold with 1.7” inch round ports on a head with intake ports that are rectangular and measure 1.09 inches by 1.975 inches, and a goodly portion of the mixture’s flow is going to be interfered with and slowed down. This will cause improper mixing and burning of the air-fuel mixture, causing a reduction in power output.

Conversely, you want an exhaust port with a volume as close to the combustion chamber volume as possible to facilitate evacuating/exhausting the chamber after the burn has concluded. This way the burned air-fuel mixture is (hopefully) completely evacuated from the cylinder prior to the intake valve opening and the chamber filling with a fresh air-fuel mixture charge.

Here’s the meat and potatoes of the job of the high performance cylinder head: Move more air in and out of the engine in less time. In the real world, this measurement/specification will greatly depend on the flow qualities of your intake and exhaust systems, but manufacturers and machine shops will use the measurement when tested with “ideal conditions” equipment known as a bench flow tester/flow bench. This won’t tell them how the head will perform when installed on your engine, but it will give an idea of how well the head will hold up its side of the airflow maximizing bargain.

In the chart above, the intake and exhaust flow numbers show that the valves have been lifted .500 inch off the seats and that the machine is pulling 28 inches of water/mercury worth of vacuum to make its measurements. As you can see, the intake flows almost one third more than the volume of the combustion chamber. This ensures that the chamber is completely filled with fresh air-fuel mixture on each cycle. The exhaust port being able to flow more than the volume of the port ensures that the cylinder is as fully evacuated as possible between cycles; thus more power can be developed. 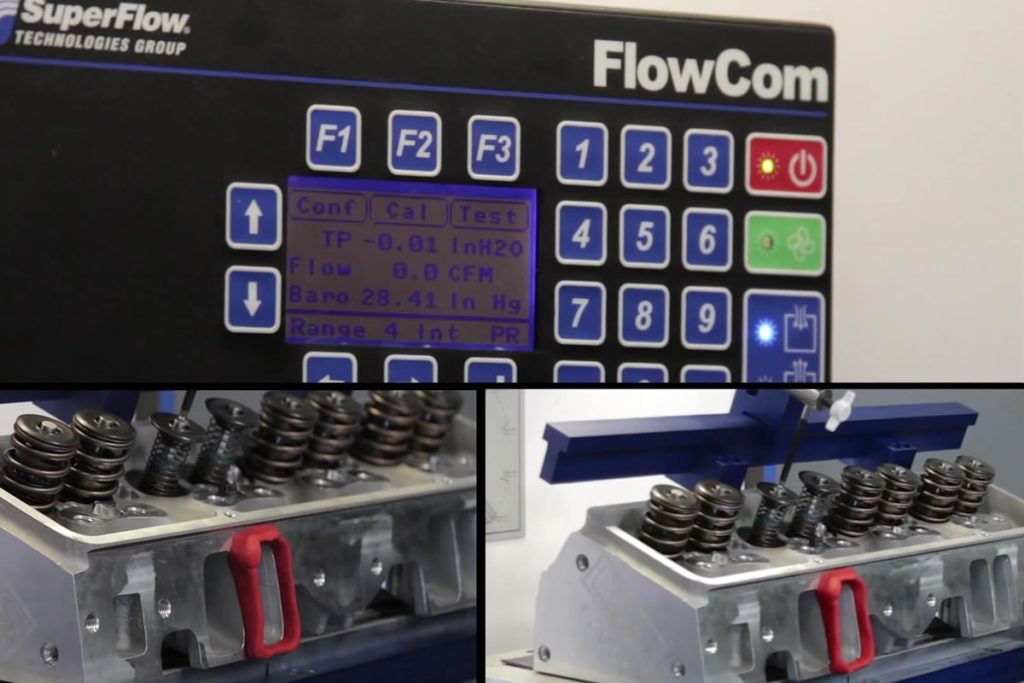 Note: This is important. When comparing head flow numbers, make sure you’re working with oranges and oranges, and not oranges and tangerines, by making sure the amount of vacuum pulled during testing is the same; otherwise, there’s no way you can realistically compare the flow numbers.

Machine shops and head specialists will take multiple flow readings with the valve stepped open by .050 inch so as to see what effect modifications they’ve made to the valve and port have had. There’s a new tool out recently that allows for flow readings to be taken at eight places around the diameter of the valve. This lets the machinist smooth out and maximize the airflow through the port with the valve at varying lifts.

Note: Avoid looking just at peak flow numbers. Unless you’re racing full out all the time, like on an oval or circle track, you need to also look at the lower lift flow numbers. If acceleration is life in your type of racing, you need to look more closely at the flow numbers for low lift values as these will impact more directly on your specific application.

The Valve Plays a Big Role in Airflow through the Head

This is basically a no-brainer, but I’ve got to mention it and how to overcome the problems valve stems cause. Lots of force is being dissipated where the valve meets the valve stem, so this joint has to be strong. The problem is, a beefy stem to seat will cause disruption to the airflow. High performance valves will be manufactured with a “back cut” on the stem to improve airflow around the valve. This back cut is a reduction in the diameter of the stem just above the transition from the valve seat to the stem.

The current “state of the art” has the head specialist/engine builder lowering a measuring device called a pitot into the port and then incrementally opening and measuring the airflow through the port. The problem with this is that the pitot disturbs the airflow in the port, and real world/”as installed” flow numbers can’t be obtained.

Rick Touchette of Rick Touchette Specialty Tooling (RTST) came up with a unique fix for this problem: He put the pitot into the sealing surface of the valve itself. This takes the pitot out of the airflow and removes it from the airflow equation. He also created a locking collar that allows you to raise and lower (open and close) the valve by .050 inch increments.

Other Important Information the Spec Sheet Will Give You

Aftermarket heads and manifolds will typically have intake and exhaust ports that are sized and shaped differently than those on OEM heads. For this reason, most head spec sheets will call out a part number (esually either their own or Fel-Pro’s, since F-P is the largest maker of intake and exhaust gaskets) so you get the ones that fit the best. Notice in the chart above, it says that a Vortec style exhaust manifold must be used. This is because of the shape and size of the exhaust ports.

Milling is important because it has a hand in determining compression ratio and head bolt length. Above, you can see that the Dart Vortec head in question has been milled .060 inches which corresponds to 60cc and that a Flat Milling technique was used.

Another important piece of information that can be found on the spec sheet is the valve angle and the type of piston that can be used. If a head has a valve angle of 23 degrees, for example, it can use any “23 degree aftermarket piston.” Valve angle is the angle the between the valve flat when closed and the cylinder bore.

So who makes the best cylinder head for the most applications? Some people prefer Dart; others prefer Brodix. Trick Flow Specialties and Edelbrock are also popular brands with engine builders and racers. Let’s take a look at one model from each and see how they compare. They are:

At first glance, these look pretty identical. Valve angle is 23 degrees. Port size/volume is around 200 cc and chamber volume is 64 cc. However, to begin with, the Dart head says it’s designed for optimal performance when on an engine displacing between 383 and 434, cubic inches while the other three perform great on 327 and 350 Chevy engines from the LT era.

Edelbrock and Brodix are the only ones that give detailed flow information, so you know how the head is going to perform at lower engine speeds. The Trick Flow chart doesn’t even give flow numbers. While the differences aren’t great, the Brodix head flows better off throttle to about .400 inch lift, at which it flattens out.

The Edelbrock head, on the other hand, comes into itself at that point and outflows the Brodix head from just over .400 through .600 inches. With identical intake and exhaust valves, the Brodix head is better for someone drag racing or autocrossing whereas the Edelbrock head is better for someone doing circle track or oval track racing where more time is spent with the throttle wide open.

Never use an impact gun to either remove or install head bolts. You can use an air ratchet to remove and run them down, but they have to be torqued properly. We went through the torque patterns and specs in an earlier article. This is true for the intake manifold and if you’ve got headers. It’s not as important for most cast iron OEM exhaust manifolds, because they’re beefier.

If you’re going to reuse/rebuild the cylinder head, make sure you follow the torque pattern when removing the head bolts. This helps keep the head from warping. This is especially important with aluminum heads. Be sure to completely drain the cooling system before loosening or removing any head or intake bolts. Also make sure you get the ground strap in back and any power steering, alternator or AC compressor brackets off the front of the engine prior to loosening the head bolts.

If I’m not replacing the intake (admittedly rare when replacing heads), I like to run four wires or pieces of string over the head braces and use these to support the intake just out of my way when working on the heads. This way there’s no “bag and tag” of wires and hoses to do. Just remove the bolts (following the torque pattern), crack the seal carefully and lift it out of the way.

8 Comments on Cylinder Heads – A Primer