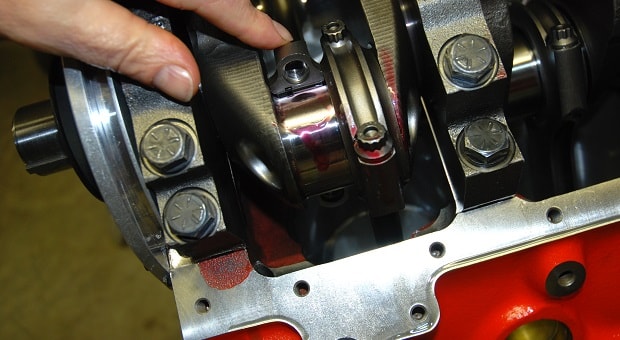 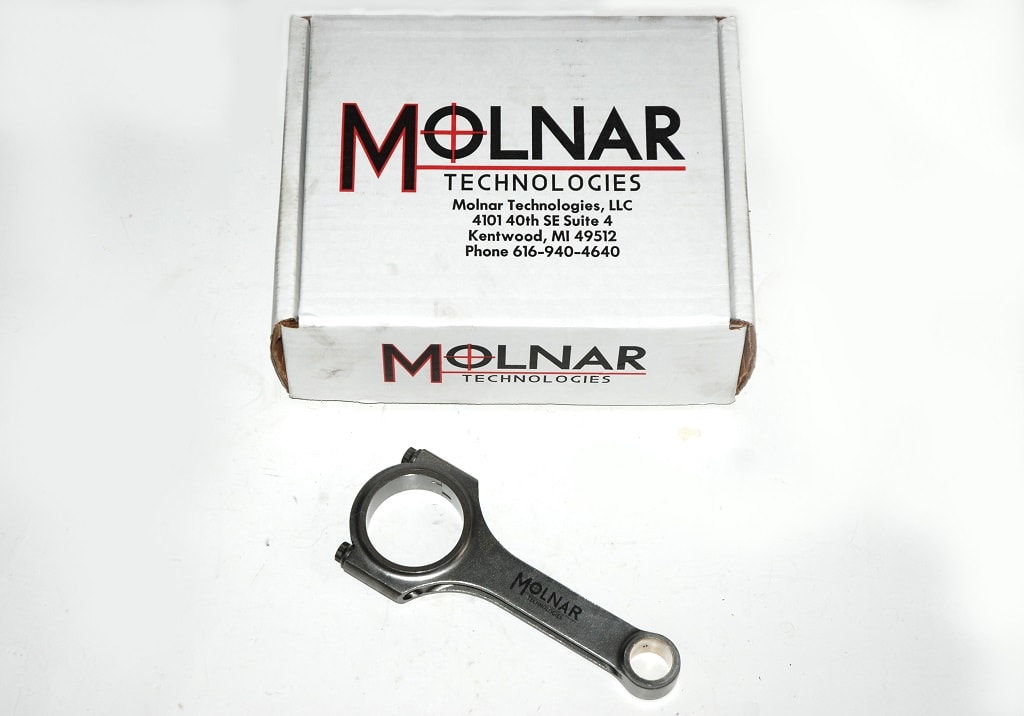 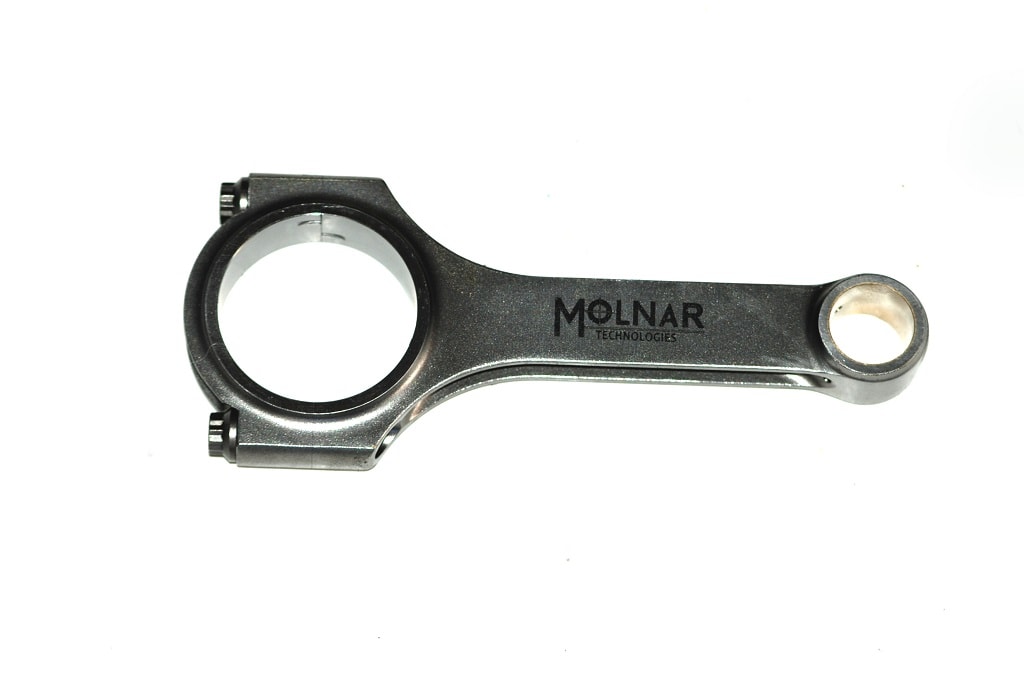 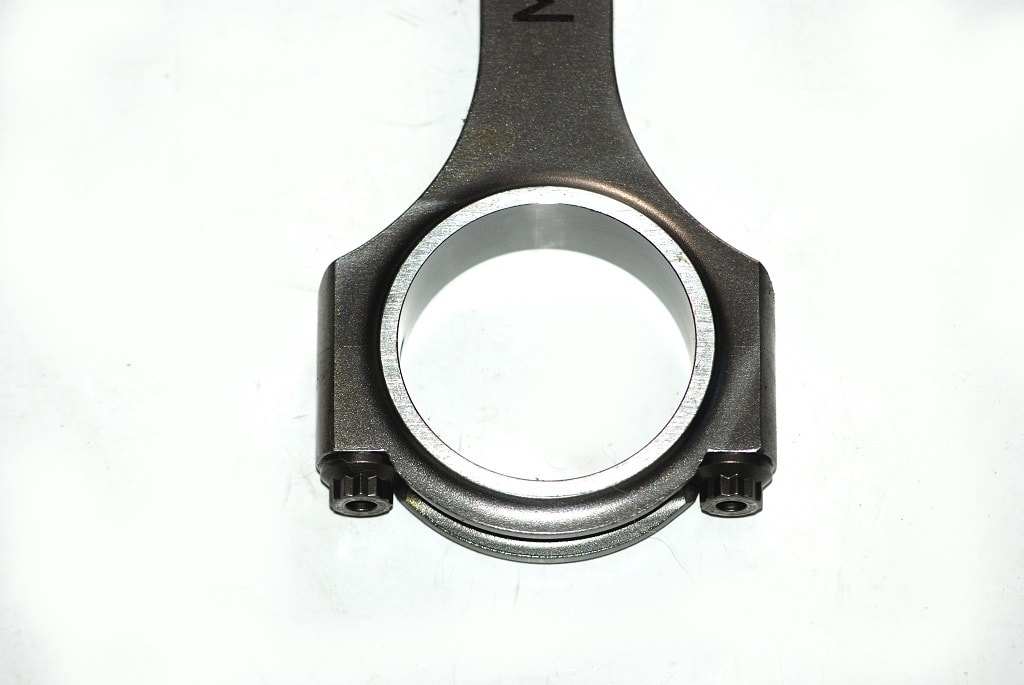 On the outside, connecting rods look like incredibly simple components. In fact, there are so many of them available today that many appear identical. The truth is, they’re not. Once you do some research, you’ll soon discover that connecting rods, just like their bottom end counterpart the crankshaft, are filled with mysteries – things you don’t know or perhaps don’t even think about. Uncovering those mysteries is the idea behind this article series. In the past, Tom Molnar (Molnar Technologies) shared his considerable knowledge regarding crankshafts. With this series, we’re going back to Tom for his in-depth knowledge of connecting rods. Check it out:

Here’s a basic look at the various rods and materials in use today:

Titanium: The most exotic relatively common rod material is most likely titanium. It has its place and it’s been used in several different exotic engine applications. Chevy used the material in their sixth generation Z06 Corvette motor (427 LS7) and Acura has used ti-rods in their NSX. The same with Porsche and others.

Titanium isn’t exactly bargain basement from a price point of view. The dilemma isn’t the actual base material cost, because it’s rather common (titanium is the ninth most abundant element in the earth’s crust and the seventh most abundant metal). The problem is that in order to make it usable, it must be alloyed with other metals. Once that’s done, the manufacturer has to overcome the problem of actually machining it. There are a number of differences between titanium and 4340 steel (as an example). One of them is the fact titanium makes for a pretty good spring. It has a low modulus of elasticity. From a machining point of view, that means willowy parts tend to deflect under tooling pressure, which in turn can create chatter, tool rubbing and, ultimately, tolerance problems. Additionally, titanium is a poor conductor of heat. That means heat generated by the machining process doesn’t dissipate very quickly. And because of this, most of the heat is concentrated on the cutting edge and the tool face. Factor in titanium’s strong alloying tendency (this is a chemical reaction with materials in the cutting tools at tool operating temps) and the result can be galling, welding and smearing. And to add insult to injury, when it comes to machining, cutting tools don’t last long with titanium. The last issue with ti in a connecting rod is the fact that it’s notch sensitive. If a part acquires a surface imperfection, there’s a really good chance that imperfection will grow (unless properly fixed – which usually means polishing).

Titanium connecting rods typically weigh 20% (or so) less than an equivalent steel rod. But they give up approximately 15% of the steel rod’s tensile strength (we’ll dig into tensile later). That’s why, in certain applications, some manufacturers and racers are willing to trade off the costs (and the ultimate loss of strength) for the lighter weight of a titanium rod.

Aluminum: Aluminum rods have been around for a long time. An aluminum rod is typically 25% (or so) lighter than a steel rod. They were once the rod of choice in drag racing (and they’re still rather common – but certainly not as common as they once were). Light is right when it comes to any racing venue, but the problem with aluminum is that it has a much (much) shorter fatigue life than steel. That’s not the only worry with aluminum: All aluminum alloys (including heat treatable and non heat treatable alloys) tend to work harden. In a race engine, an aluminum rod stretches and compresses with every completion of the 4-stroke cycle. It is this stretching and compressing that actually work hardens the rod. Work hardening makes the connecting rod brittle and eventually it will fail in a catastrophic manner.

Due to the fact most aluminum alloys used in connecting rods have roughly ½ the tensile strength of a good steel connecting rod, an aluminum rod has to be made larger. That bulk can get in the way inside the crankcase, especially with long stroke crankshafts. With an aluminum rod engine, you also have to be careful on every warm up cycle. The reason is a smart engine builder will set the clearances for “hot”. Why? It’s because the expansion rate of aluminum is much higher than steel. Basically, the warm up cycle allows the clearances to get up to size.

Years ago, Pro Stock (which obviously is, or at least was, one of the most competitive categories in any form of motorsports) was a place where aluminum rods were the norm. That isn’t the case today. One big reason for this is most likely due to the fact that a steel connecting rod stabilizes the piston and ring pack, which in turn nets more power.

And finally when it comes to aluminum rods, most drag racers will count dyno pulls and laps down the quarter mile with aluminum rods. After 50-70 passes, the rods are replaced.

Steel: When it comes to steel connecting rods, there are plenty of different examples available (some cast). We’re not going to include weak castings and we’ll concentrate on steel materials that can be forged or fully machined (billet or forged). Where high performance steel rods have a decided advantage is in their ability to withstand repeated high (shock and other) loads. How much load? Plenty! Case-in-point is Reher-Morrison testing, which discovered connecting rod stretching forces in a 500 cubic inch Pro Stock engine can easily exceed 12,000 pounds (some even estimate the forces are in the range of 15-18,000 pounds).

So what connecting rods should you use and what are the limitations? Let’s begin with a stock forged rod: An OEM forged steel rod begins life as a chunk of carbon steel. It’s pressed through a rolling die, which establishes a lengthwise grain flow. The bar of steel is then heated and placed into a die. It’s pressed into a close-to-final state. A large punch then knocks out the crank pin end. This process disturbs the grain flow at the big end, moving into a circular pattern (a good thing). As a result, the rod picks up some pretty good compressive and tensile strength. Next the raw forging is trimmed (that’s where the big parting line comes from on the beam). The big end is machined to create a cap and the bolt holes are drilled and spot faced. The rod is final machined (pin fit) and the big end sized. At this point, the OEM typically calls it done.

Tom Molnar tells us that some companies claim their rods are made from two-piece forging, which results in an improved grain flow, but this is actually a myth. While is it true a forging has grain flow that improves strength, if the part is properly heat treated as a connecting rod should be, this is no longer the case. In 4340 materials you are looking for a fine grain martensitic structure, which is much stronger than the as-forged structure. The heat-treating process changes and refines the grain structure and the grain flow is no longer present.

There are some other considerations too, according to Tom: “The forging process is sort of a myth. When you put a hot bar of steel with grain flow that runs from one end to another into a press, not only does it not close the grain at the top of the part, in most cases, the same forging is used for long and short parts. When a short rod is made from this forging, the end is cut off which leaves open grain. Also, punching a hole in the big end does not make the grain circular any more than drilling a hole in the part would change the grain flow. Also, since the forging process is done at such a high temperature, the compressive strength would relax before it cooled. It also does not pick up any tensile strength. This is done during the heat treating process.”

What you have when the connecting rod is done is a component that isn’t always manufactured from the best of available alloys. These stock production line rods can have impurities in the material, and they can have inclusions (basically anything that interrupts the rod surface). Remember the old racer trick of grinding, polishing and shot peening the rod beams? One big reason for the labor-intensive work is (was) to remove potential inclusions. In the end, an OEM rod limits you to length and crank pin/rod pin choices, plus the ultimate strength is pretty much limited to low-medium performance applications.

When it comes to high performance connecting rods, the material of choice is 4340-alloy steel. High carbon steels (4130, 4340, etc.) are definitely better for bottom end parts than lower carbon grades. Most good connecting rods are manufactured from steels that have passed inspection by way of a high power microscopic examination.

Molnar provides insight regarding alloys: “The last 2 digits of the AISI number designates the amount of carbon in the steel. 4130 steel has .30% carbon and 4340 material has .40% carbon. In the forging process a bar of steel is heated in a furnace, pulled out with tongs and placed between the forging dies and pressed into the desired shape. When the hot steel is removed from the furnace, it is exposed to the oxygen in the air we breathe, which burns off some of the carbon on the outside surface. This creates what is called a decarb layer due to the lower carbon content. A certain amount of decarb is allowed in forgings; however, if you think about it, the outside layer of a forged 4340 part is not really 4340 due to the lower carbon content. Since most cracks in a part start on the outside fibers of the part, this lower carbon surface is a place where a crack can start. 5140 steel also sees use in connecting rod applications. While 5140 has the same amount of carbon as 4340 (see above regarding AISI numbers), the other elements that are missing or added that make it less strong than 4340.

The best of the forged rods are fully machined examples. Typically these connecting rods begin as raw forgings, and then go through a large number of machining operations. The process leaves few (if any) rough surfaces that can lead to stress risers. Fully machined forgings or billets should be used in any application where there is a need for ultimate strength, durability and low maintenance. But we’re not quite done yet. Watch for Part 2 coming up shortly.
Molnar Technologies offers all sorts of forged steel connecting rods (in this case, a rod for a big block Chevrolet). While not mentioned in the text, Molnar makes use of an “H” beam rather than an I-beam design because it is simply stronger.
This Molnar Technologies connecting rod is manufactured from 4340 steel. The process begins with a steel billet, and it is ultimately CNC machined. The material is heat treated to what Molnar advises is a 100% martensite grain structure. A custom 6.480-inch length, standard journal size big block Chevrolet connecting rod such as this one from Molnar weighs 738 grams. In comparison, an OEM Chevy 7/16-inch bolt rod (6.135-inch center to center) weighs in at approximately 780 grams.
This rod is designed with a cap-screw connecting rod bolt setup. The rod bolt threads directly into the connecting rod body. In comparison, many passenger car connecting rods use a rod bolt with an integral nut. This means that the rod bolt is pressed into the rod body and a nut is used to fasten the cap. More on rod bolts in the next issue.
Back to Post