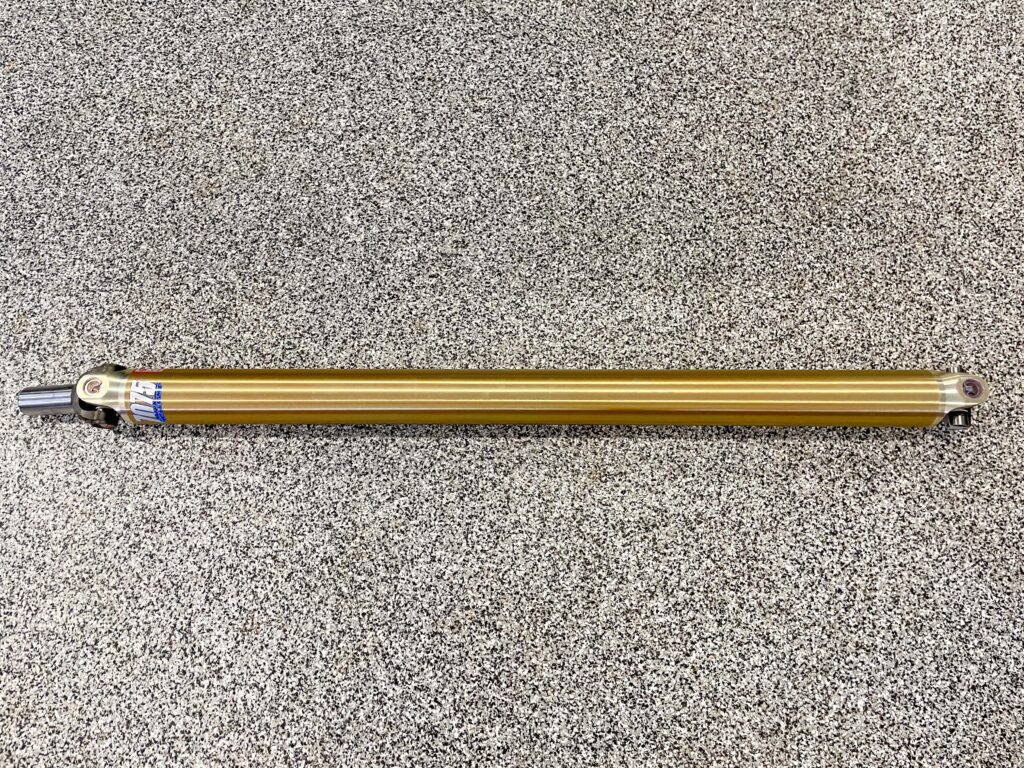 Part 2 of Wayne Scraba’s series on street and strip driveshafts focuses on balance and universal joints.

In our last issue we introduced you to a wide range of driveshafts from Mark Williams Enterprises . If you point your browser back to the first article in the series, you’ll note M-W manufactures driveshafts from mild steel, chrome moly steel, 6061 aluminum, 7075 aluminum and carbon fiber. Each has its own different characteristic and price points. Some take more power to spin than others. But all have two things in common: They need to be balanced and they need some sort of universal joint in order to function.

When it comes to driveshafts, universal joints are critical. No surprise we’re sure. You’ll note we’ve been zooming in on Spicer “lubed for life”, non-greaseable u-joints. There’s good reason for that. According to Mark Williams:

“Most driveshafts used in drag racing employ 1350-series U-joints, although for high horsepower, Pro-Mod applications 1480-series joints are starting to be introduced for specific transmission/rear axle combinations. There are also differences in U-joint construction, ranging from stock Spicer units with zerks to solid non-internal greasing units.”

It’s interesting to learn that a large chunk of driveshaft failures is caused by universal joint failure, especially in heavier cars. Many high performance vintage cars were originally fitted with Spicer 1310-series universal joints. Here the u-joint cups measure 1.062-inches in diameter with a width of 3.219-inches. In comparison, a Spicer 1350 universal joint has a cup diameter of 1.188-inches and a width of 3.625-inches. Meanwhile, the honking Spicer 1480 series universal joint commonly found under Pro Mod cars has a cup diameter of 1.375-inches and an overall width of 4.180-inches. A 1350 u-joint is approximately 50% stronger than a conventional 1310 while a 1480 u-joint is 40% stronger than a 1350.

On a similar note, OEM-style U-bolts are also suspect in severe duty applications. For specific applications, M-W offers a billet steel cap assembly that can handle up to 500 foot lbs. additional torque.

Fair enough, but how can one quantify strength figures on a driveshaft? M-W developed an immense Torsional Testing Device that can exert up to 20,000 lbs. of torque on the driveshaft, and is used for a variety of purposes, including verifying the bonding strength of all M-W “Accu-Bond” driveshafts and conducting tests for SFI to determine compliance with SFI 43.1 Specs.

There’s more, too. According to Williams, “Proper phasing of the U-joints to the shaft is critical, and for drag racing applications a “0” phase setup (front and rear U-joints are in the exact same position) has proven to be the best.

“Balance is also important, and it can have an effect upon performance because the laws of physics tells us additional radial power is required to turn an eccentric shaft, Basically, if the driveshaft is perfectly balanced the car will put more power to the ground.

“To assure this, M-W has a sophisticated computer-controlled balancer that can spin test to 10,000 RPM and is used to replicate actual operating conditions. The shafts are balanced to G30 specifications.

“There are also factors, such as transmission and rear end yokes, to consider. But in the end it’s best to put your trust in a reputable manufacturer rather than rely on warmed-over stock components.”

“For the sake of comparison, we will use 45-inch center-to-center, 3.5-inch o.d. driveshaft with a M-W 39004 Turbo 400 trans yoke. Steel, of course, is heavier than aluminum or carbon fiber. A 3.5-inch o.d. shaft made of chrome moly tips the scales at 20.6 pounds. Aluminum is by far more popular, and M-W’s exclusive 7075 alloy driveshafts are 13.7 pounds. A 3.5-inch o.d. 7075 shaft weighs about 33% less than an equal size chrome moly shaft. This translates to 33% less power needed to accelerate the driveshaft to operating RPM, and the faster the driveshaft spins the more power that is saved.”

Does this really have an effect in the real world? Decades ago, this writer tested driveshafts for another publication. The car in question was an extremely reliable, well-sorted and consistent Stage 1 Buick Stock Eliminator car. We devised a simple plan where, on a quiet test and tune day, we’d baseline the car with a steel driveshaft, remove and replace the shaft with an aluminum example, run the car and then swap back to the steel driveshaft and run the car once more. Essentially, this was a common “A-B-A” test pattern. We used a known weather station to keep track of conditions. The simple driveshaft swap picked the car up from 0.035 to 0.078-seconds. And those are the uncorrected numbers. As the test progressed, the weather changed (even in a total time span of just 53 minutes). Using correction factors, the improvements were still impressive (a spread of 0.039 to 0.059). Lots of racers would sell their sisters for a gain of half a tenth. More important were the incremental times. 60′ times improved. So did 330′ times, 660′ times and so on. Following the computer evaluation, we found that the true improvements all came during the first 3/4 of the pass. Then the car slowed down a bit. Our hypothesis? The Buick doesn’t really like the 4.30 gear. It really needs a 3.90 gear or a 4.10 ratio coupled with a set of “tall” 30″ radial slicks. In the end, we concluded that reducing driveshaft weight consistently decreased elapsed times.

Two considerations here are the aluminum shaft wasn’t exactly legal for a Stock Eliminator car (the Buick wasn’t originally produced with an aluminum driveshaft), plus the shaft in question was a metal matrix aluminum shaft.

Metal matrix composite (MMC) 6061 aluminum was a revised alloy. It contained a certain amount of silicon carbide particulates that were said to increase the strength of the alloy. The shafts built with MMC material were typically thin wall (in the range of 0.110-inches – the same as an M-W 7075 alloy example). The reason metal matrix aluminum driveshafts aren’t common today (basically non-existent) is because the material wasn’t consistent. You could get a great weld on one shaft and the next it would be horrible. Or you’d great weld on one yoke and on the other, the weld would be not so great, even using sophisticated automatic welding machinery.

The point of repeating the whole test exercise here is, a lightweight driveshaft (whether it is 6061 aluminum, 7075 aluminum or Carbon Fiber) will improve the performance of your car.

We’ll end part 2 here, but next time around, we’ll conclude out look at high performance and race driveshafts with a look at universal joint angles and critical speed. We’ll also share Mark Williams’ advice on how to measure for a driveshaft. There’s more than you might imagine folks. Watch for it. Meanwhile, check out the accompanying driveshaft photos: