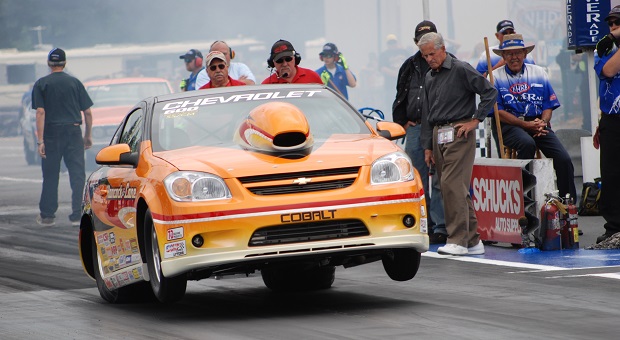 Take pity on the poor driveshaft universal joint. Consider what it has to put up with in many common drag race applications (and we’re using an equally common Sportsman race car combination as the example here): Five or six hundred foot-pounds of torque passing through a torque converter which is often doubling (or tripling) the torque output, then moving through a transmission which, by way of gearing, increases the torque another two and one half or three times. On the opposite end is a tire that’s super sticky and doesn’t want to budge. The result? A couple of pieces of equipment (the u-joints) trying to withstand 3500 foot pounds of force (or more), which is in turn making an immovable object moveable. It sounds like weird science, but it’s not. It’s pretty standard stuff most of us accomplish with our race cars. And we do it regularly.

Unfortunately, u-joints are far from the most glamorous pieces of equipment you can install on your race cars. You’re guaranteed to have friends, confidants and even complete strangers drooling over their shoes when they see the latest and greatest pieces under the hood. But when was the last time someone crawled under your race car and complimented you on your u-joints? OK. So universal joints are pretty far down on the automotive drool chain, but they’re still very important – so important that if one expires, it can take the complete floor out of your pride and joy.

Given that, we decided to dig deeper into the subject, and contacted Mark Williams for the inside technical story: First and foremost, Mark Williams tells us they primarily use high quality universal joints manufactured by Dana-Spicer. The typical universal joints for use in race driveshafts cover a wide range of sizes. Usually the smallest (using Spicer u-joints as a basis) is a Spicer 1310, followed by the Spicer 1350, the MW Solid and finally the honking Spicer 1480 series universal joint. Smaller universal joints with zerk fittings are not desireable for performance work, but in certain applications, physically larger u-joints such as the 1480 series can be used. Typically called “lubable” or “blue seal” universal joint, these components have their place, but not in an application with big horsepower (and torque) on hand. Why is that? Simple. A lubable universal joint is inherently weaker than its solid sibling. Internally, a lubable joint has a cavity designed to contain grease. This cavity effectively hollows out the joint which, in turn, weakens the structure.

Non-greasable universal joints have journal crosses cold-formed from high quality steel. This provides maximum strength. Ample grease reservoirs in each trunnion assure effective lubrication and are pre-filled with high quality synthetic lithium grease, providing superior friction reduction and higher temperature resistance. Mark Williams points out: “The size of the trunnion on the cross is where the U-Joint derives most of its strength.”

In the next issue, we’ll dig into picking the u-joint and we’ll also look at how to actually fasten a universal joint.