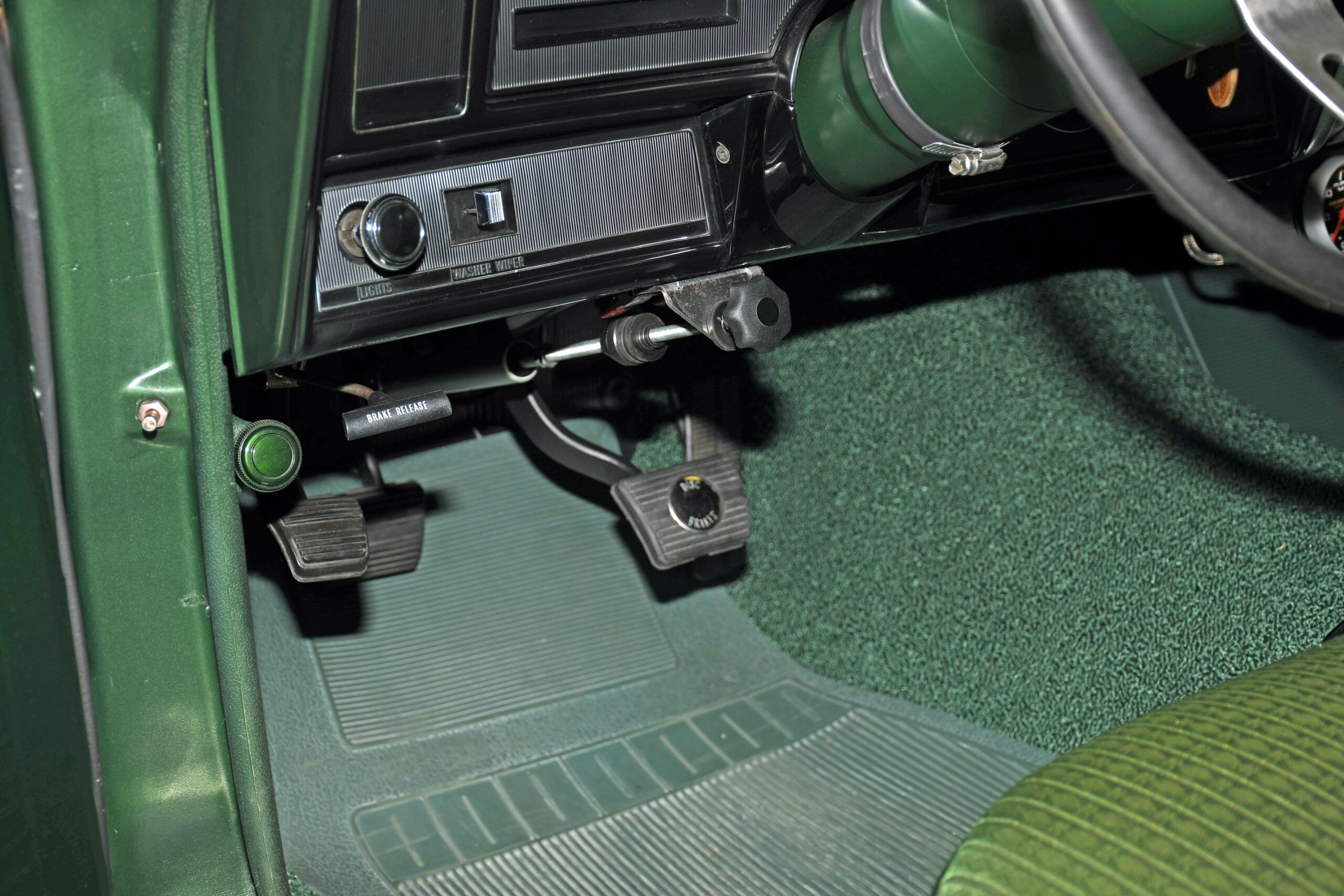 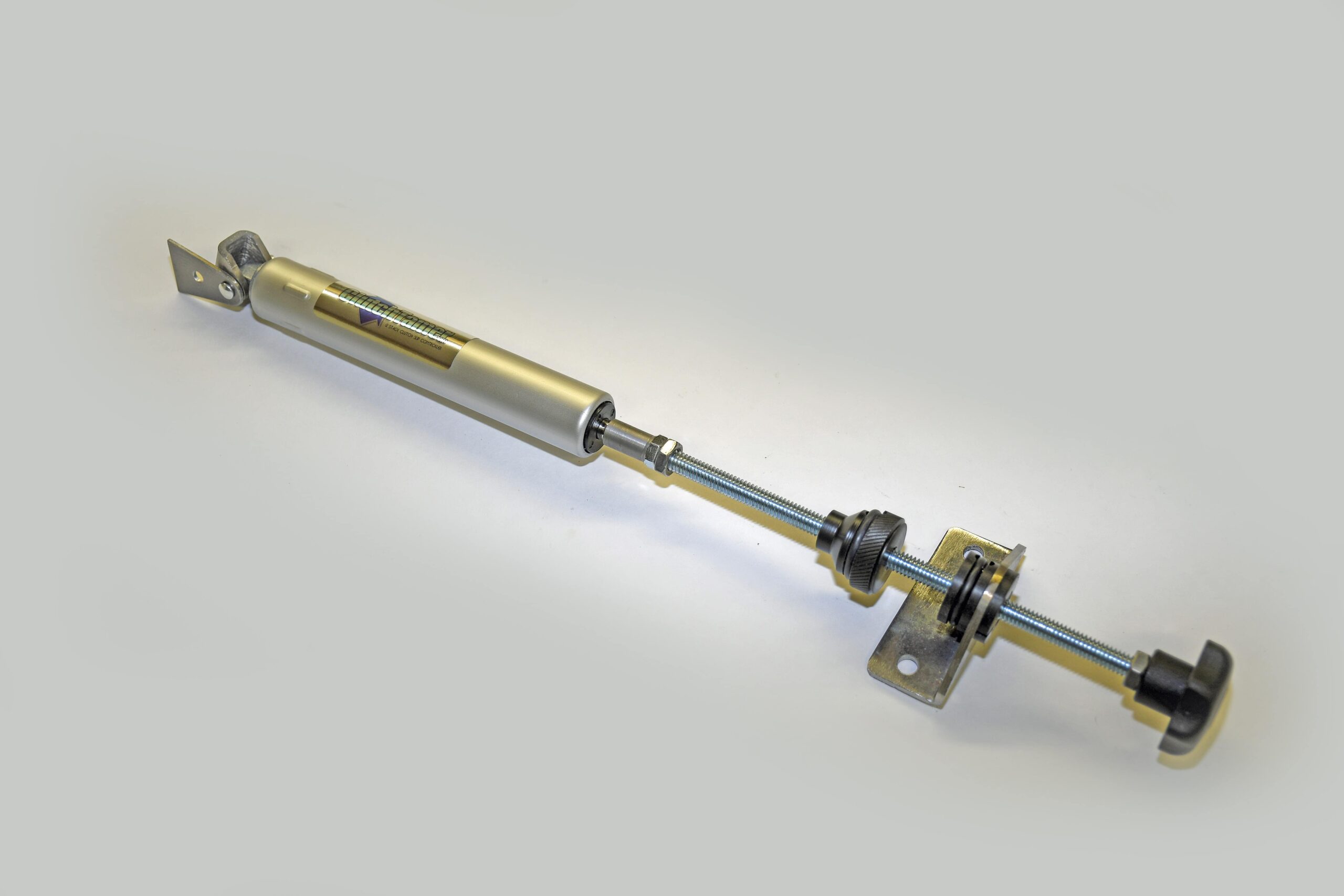 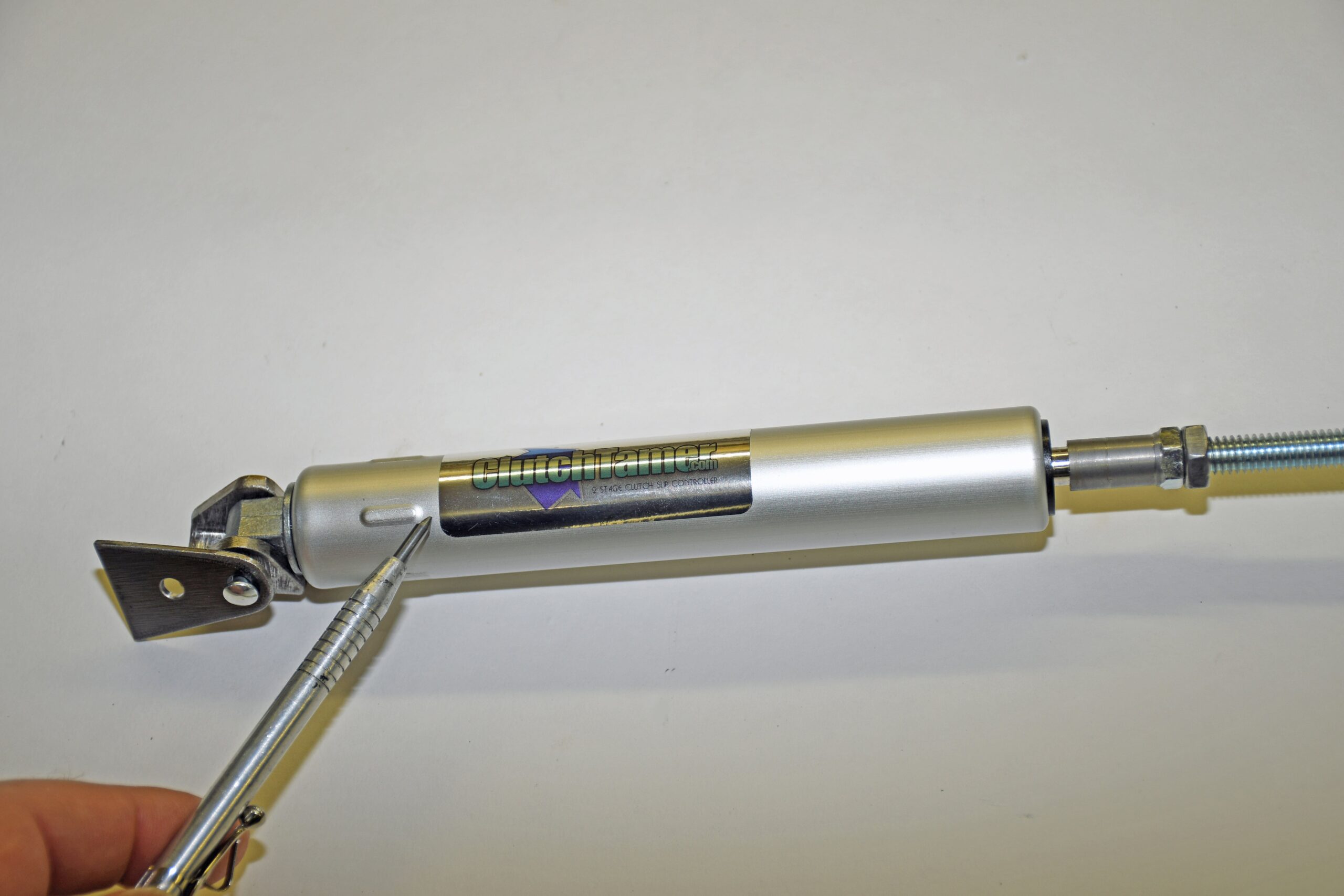 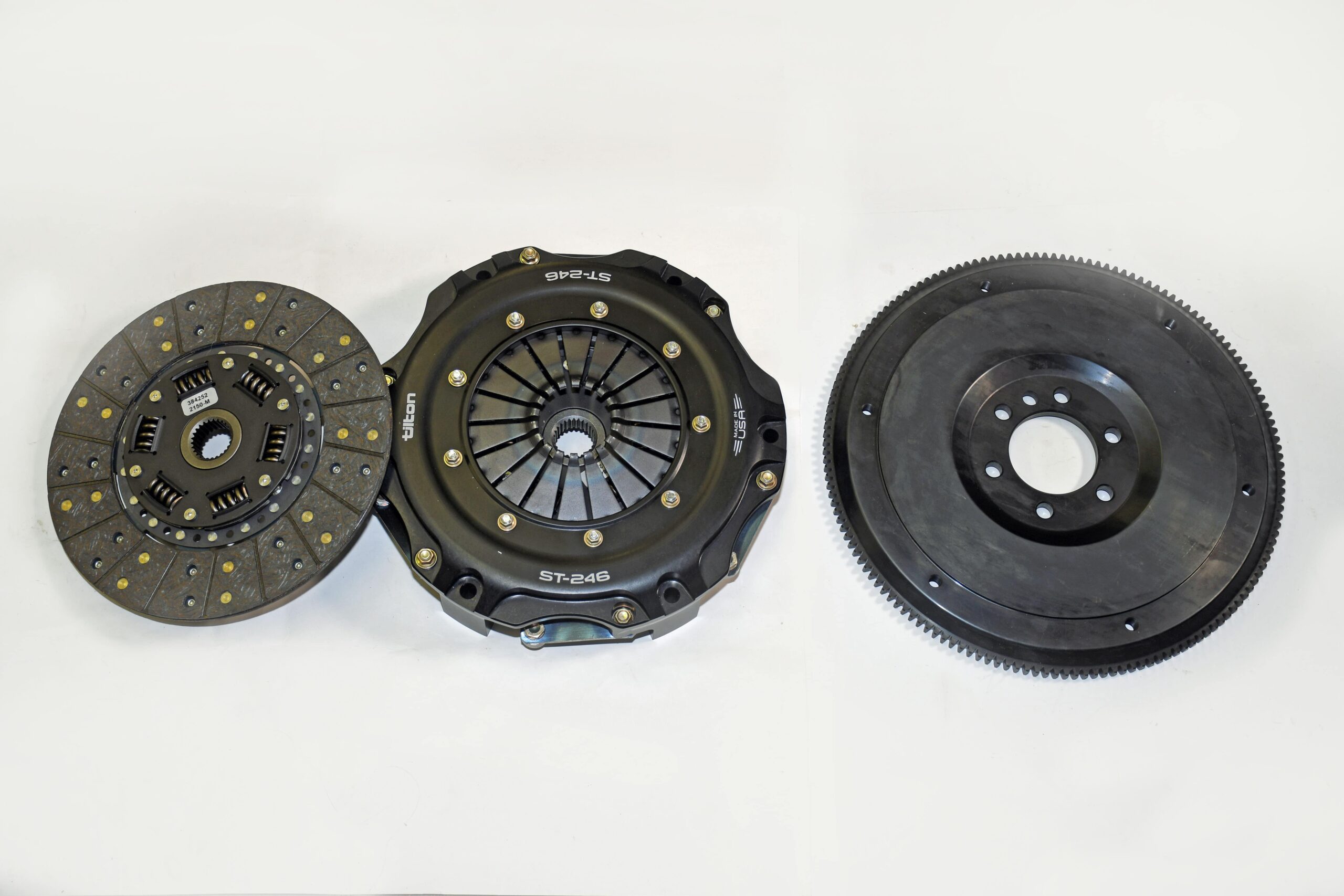 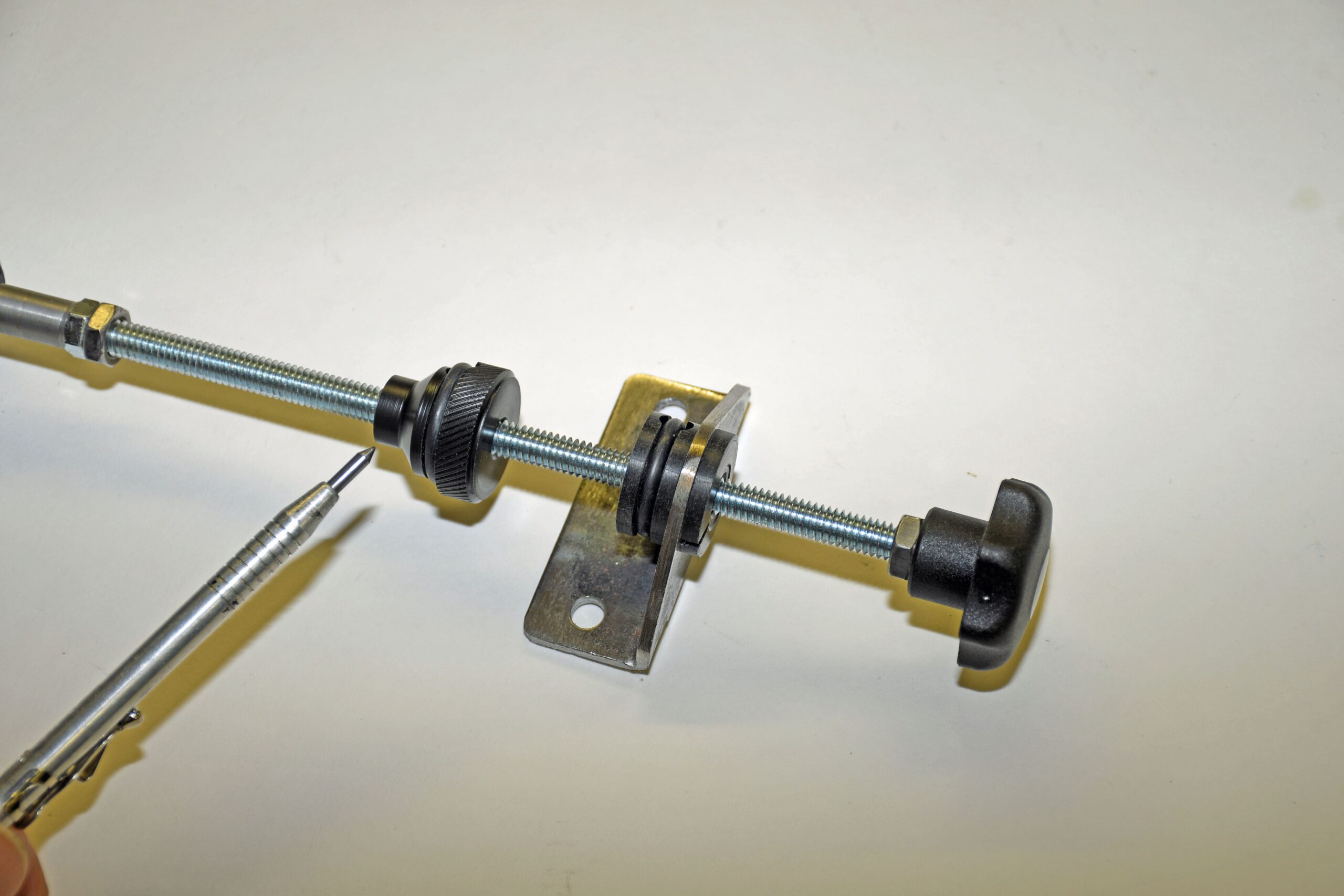 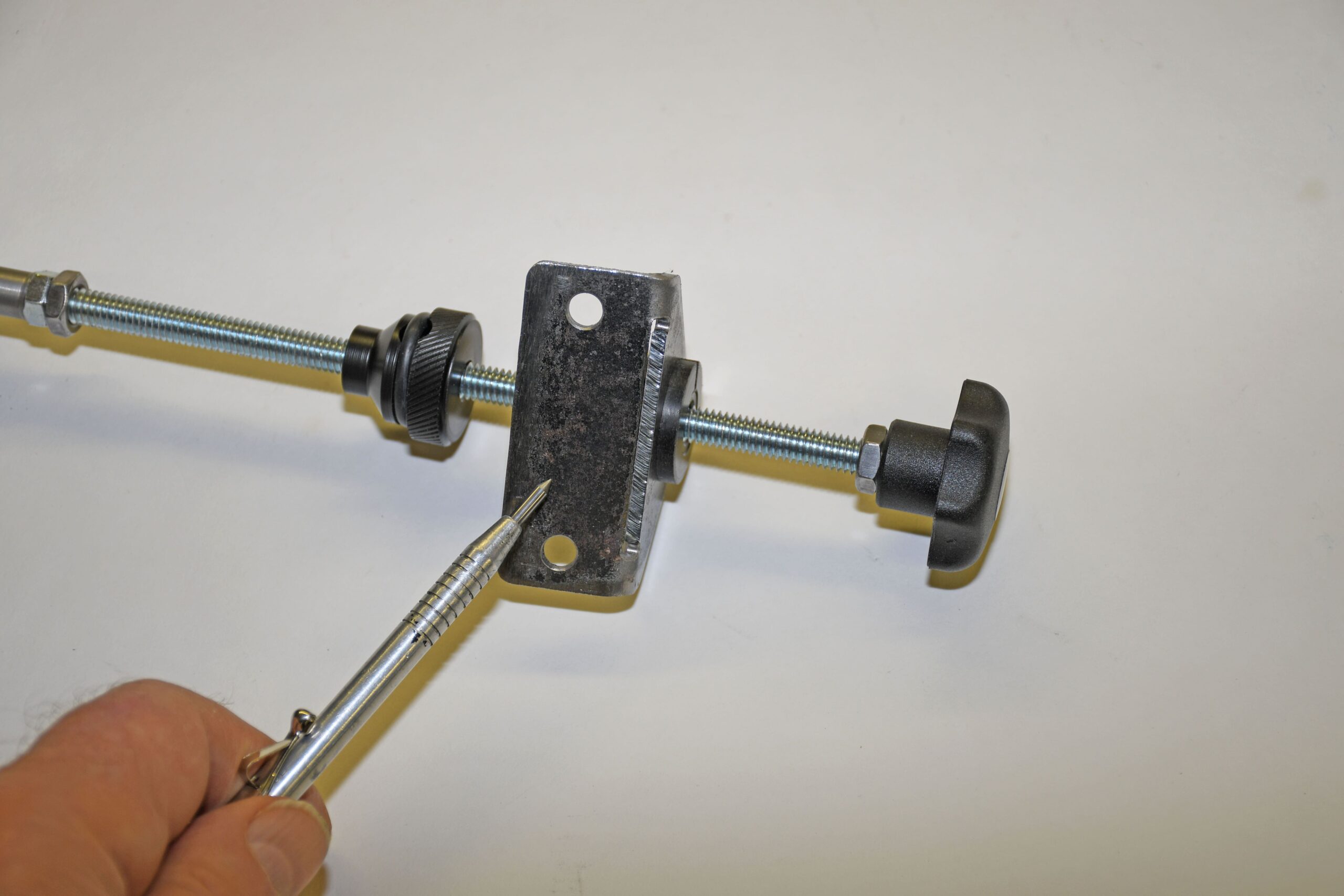 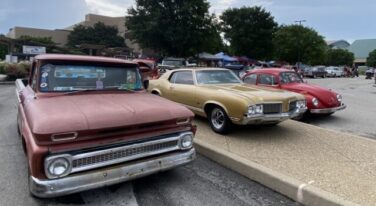 Running a drag car with a stick shift transmission is like walking a tightrope. Here’s why: In order to make the car work, you have to leave at an RPM suitable for the torque curve the engine produces. Usually that means well above 4,000 RPM. The car can’t dead hook. You need some slippage (tire and clutch) or the thing will start shredding parts. Because of this, it also means you’ll likely be forced to use bias ply tires (and usually with more PSI than you’d first think). The initial solution is to use some form of adjustable slipper clutch. Plenty of folks offer them and there are a number of different examples out there. They all pretty much work the same. In addition to adjustable initial clamping pressure (baseline spring pressures) these clutches all have some form of adjustable counterweight to allow them to remain soft on the bottom end and then progressively lock up by way of centrifugal force during the run (this is really important at the top end). When sorted out they tend to work well. The dialing in process takes some work and it’s coupled with picking the right mix of components. Let’s just say you’ll be spending quality time under the car working out the tuning combination. And this combination can vary from track to track along with other variables such as weather conditions coupled with track altitude.

Fair enough. What if you have a street-strip car? Technically speaking, it is possible to run a car with a soft, adjustable clutch on the street, although the initial designer of these clutches told me a long time ago it wasn’t really good idea. There are various reasons for this, but if you choose to try to use one on a street driven car, be prepared to climb under the car and dial in as much pressure as you can in the adjustable springs. Then you’ll have to ensure there’s sufficient counterweight installed to clamp the clutch at higher RPM. The bottom line here is, slip it too much on the street and you’ll be replacing expensive parts in a hurry. Don’t know about you but I’m not all that fond of bench pressing manual transmissions on a regular basis.

Because of all of the above, plenty of folks with high horsepower street driven cars have resorted to using relatively small diameter, dual disc clutch setups. Most of these have a modified diaphragm pressure plate and for street use, most use some form of organic rag disc or a combination of an organic disc and a metallic puck style disc arrangement. They work great and usually they offer great durability. But there’s a hitch: Dump the clutch at the torque peak or higher and the car will usually go up in tire smoke. Bang the gears in high horsepower, relatively heavy street car and you’ll most likely start tearing up drivetrain parts.

The ClutchTamer is the brainchild of Grant Robbins. A long time ago, Grant was attempting to pump some power through a Saginaw four speed transmission. As we all know, those things weren’t exactly renowned for their brute strength. Grant was going them on a monthly basis. The solution was to soften the initial hit of the clutch. But how? Sure Grant could have tried to modulate the clutch pedal and try to slip the car out of the gate, but in the real world, that’s really a hit and miss arrangement. And miss is more common than hit! But I digress: While wandering through the aisles of a local hardware store, Grant spied a common hydraulic door closer. Boing! The light bulbs went off in his head! What if it was adapted to slow down the clutch pedal return? That’s exactly what happened. Essentially, Robbins devised a way to hook the door closer to the clutch pedal in his car. It certainly modulated the pedal return. And on the track, it worked fabulously. His street car saw 60-foot times in the 1.45-second range, and he no longer left a trail of broken Saginaw four speeds behind him.

The first prototype examples were rudimentary, but over time, the ClutchTamer evolved into a rather sophisticated, well developed and tested component. Before long, it morphed into a custom fabricated, fully adjustable device that sees use in all sorts of street and race applications (actually there are more out there than you can imagine, but some folks are, understandably, not talking!). In the next issue, we’ll dig into the details. Watch for it! And in the meantime, check out the accompanying photos of a new ClutchTamer:

Click Here to Begin Slideshow
There are several different versions of the ClutchTamer. Some are designed as direct fit jobs. Others, such as this “musclecar” version are a bit more universal.
The heart of the ClutchTamer is this hydraulic cylinder. What it does is to effectively slow down the rate at which the clutch pedal releases. Essentially, it slips the clutch in a controlled way.

When you have a really stout clutch setup like this high quality dual disc arrangement from Tilton, you’ll find the key to making it work (and simultaneously, not break drivetrain parts) in a drag race environment is to modulate the clutch.
There two fundamental adjustments available within the system. One adjusts the hydraulic cylinder and the other sets the “free play in the clutch. We’ll get into the adjustments in an upcoming issue.
Essentially, the ClutchTamer bolts between a solid piece of dash structure and the clutch pedal. Next issue, we’ll dig into the setup.
Back to Post