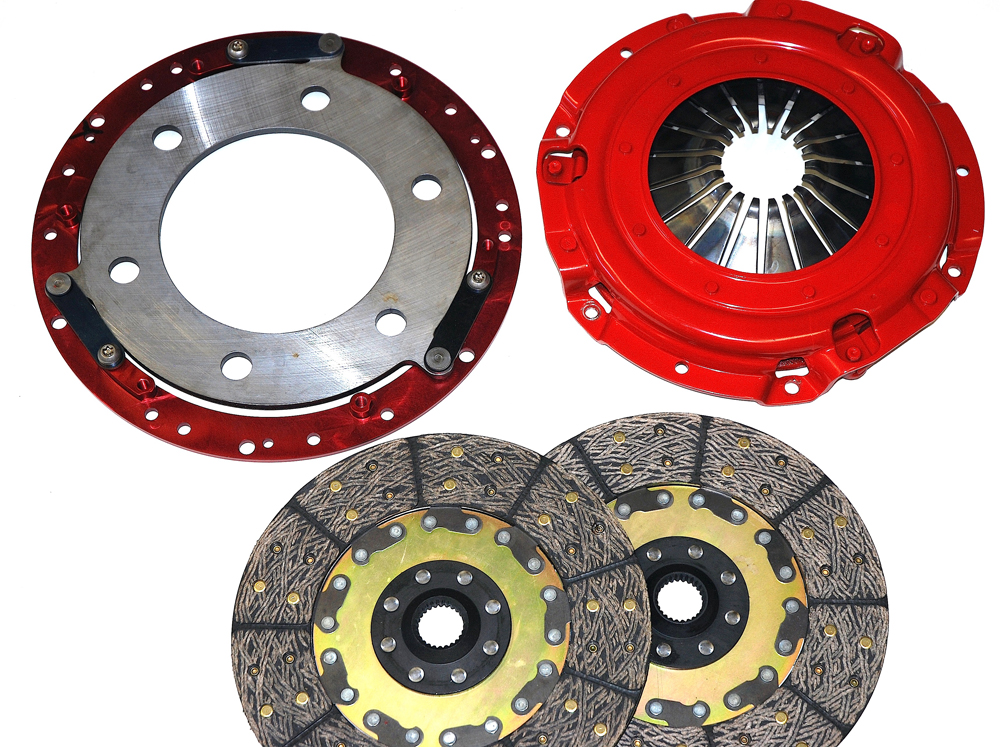 To read the earlier parts of this series, go HERE:
Part I
Part II

Given the single disc “old school” clutch package we discussed in the past two sections, we have to keep in mind that technology has relentlessly marched forward.  In most dedicated racing applications, clutches have shrunk dramatically in size.  Plenty of Pro drag cars function with positively tiny clutch assemblies. The truth is, it’s pretty common to find clutches with (get this) an outside diameter of 5.50-inches.  And yes, there are some “big” set-ups out there that measure anywhere from 7.00-8.00-in in diameter.  Typically, many of these little pressure plates incorporate diaphragm springs, but real key is the use of multiple discs (two, three or more).

A number of years ago, McLeod Racing picked up on the value of multi-disc clutches.  They were fully aware of the advantages of the technology, but the big question was how to mate the technology from professional racing to something that could be used on the street. The result of their research and development is their latest series of “RST” clutch assemblies.  Although  not designed as dedicated racecar clutches, the RST is a street car clutch you can take to the track. In turn, this makes for a pretty nifty combination for a dual duty street-strip machine.  Or even for a (rare!) stick shift bracket car.

McLeod has been investigating and manufacturing high performance dual disc clutch assemblies for years (pretty much ever since GM discontinued their Borg-Warner-built dual disc clutch option in the early seventies).  One big problem that faced those earlier dual disc setups was the need for a unique (and perhaps more important “expensive”) flywheel.  McLeod’s RST clutch package is actually engineered to work with a stock style flywheel (you can use an aftermarket flywheel as well and of course, for most drag race applications you’ll need one due to SFI requirements – we’ll get to that later).

Based upon a 9-11/16-inch diaphragm pressure plate, the RST clutch includes 2 organic discs as well as a steel floater plate.  By reducing the overall diameter of the clutch, the moment of inertia is reduced.  How important is this?  More than you might think:  You see, the rotating components found in the driveline of your car include the crankshaft, flywheel, pressure plate, clutch disc(s), the gears inside the transmission along with the driveshaft.  Each and every one of these pieces operates at a relatively high RPM.  Given the high operating speed, the effect of the combined rotating inertia has upon acceleration is high.  If the weight of that rotating mass is reduced, then the basic assembly can spin faster.  Bottom line? If the mass becomes smaller, the car in question will accelerate faster.  But that’s not the end of it:  If the weight in the rotating mass is moved closer to center of the mass then the entire assembly can spin faster.  Basically a double-whammy.  That’s why the Pros we mentioned previously have gone to smaller and smaller (diameter) clutch components.

Next time, we’ll wrap up our look at clutches (keeping in mind there’s plenty of choice out there).