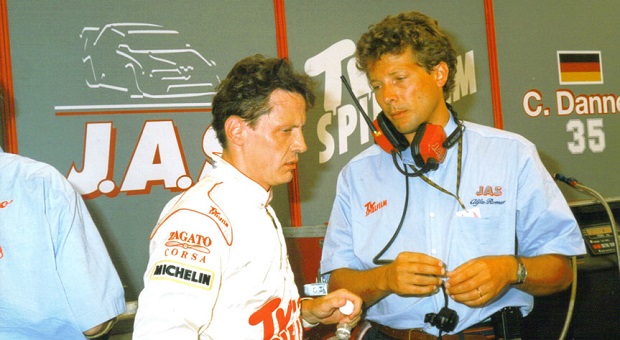 Despite the notion that racing is a solitary sport, the best racers are those who can work well with their mechanics and engineers. There is a specific way a clever driver exchanges work and information, processes it and uses every available resource to gain an advantage. Once they’re in the car, it generally comes down to talent and reliability, but so much of a race is won before the green flag ever drops.

Think of the Team

As modern racing teams now have as many as a hundred employees on-site at a race event, coordinating takes communication, obviously. Now, the perspective of the driver takes precedence on this occasion, since we’re focused on learning how to drive – but the same principles apply to the technical director, fitness instructors, mechanics and engineers. A certain amount of harmony is necessary in the large, convoluted racing family, and when two egotistical drivers give rise to a rivalry that spirals out of control, the team stops functioning as well as it could. Sometimes it helps to share information with your teammate, even when they’re your greatest opponent.

Show Respect for Everyone

The sympathetic driver gets ahead by engaging respectfully with the mechanics and engineers. The drivers who show respect for those who wrench on their car in the ungodly hours are apt to get better treatment when the chips are down. This isn’t due to anything underhanded or insincere, but nobody wants to wrench all night, and though the mechanics will reluctantly inhale that third cup of coffee to get the job done, they’ll be a hell of a lot happier to do it if they’re fixing a car for someone they like – and that increases the chances of them doing a great job.

Respect comes in many forms, but it’s also worth noting that the engineers and mechanics don’t need or want to be told how to do their job. This isn’t about being a prima donna, either. Some drivers want to play engineer and stamp their mark on a team, and after they come in after a test session, they unload a laundry list of specific technical changes they want their guys to make. “Change the roll centers,” a driver barks at an annoyed engineer, and sets himself back without knowing it. Instead, the clever driver tells their engineer, “The car is understeering in this corner,” and asks questions. After all, a race engineer has gone through years of school to get to where they are.

That rapport comes down to respect, but also a sensitivity to the car’s behavior and the ability to express it. Any Carroll Smith book touches on these points, and gives an aspiring driver the vocabulary to convey specific vehicular behaviors to the engineers. Some of the best will put in hours and hours of downloads and debriefs with their team to get the most out of the car, and ensure they’ve missed nothing. This sort of dedication helps motivate a team too, which really cannot be underestimated. So much of Schumacher’s success came from his ability to inspire those around him; if they gave him a decent car, he’d take it to the absolute limit and beyond.

Young drivers also tend to be quite proud, so when a technical mistake is made, it pays to admit to it. Some will insist it’s something else, but nowadays, with so much telemetry, the drivers can’t get away with lying. Their every mistake is revealed, so there’s no sense in being stubborn. If something doesn’t work, admit to it and move forward.

It’s also hugely useful to be as honest as possible. Admitting to a little fear, a mistake or plain ignorance will save the mechanics and engineers from scratching their heads, wasting time, and growing resentful. Having a clear line of dialogue between both parties is essential, like any marriage counselor will tell you, but in racing, your life is on the line – not just the house.