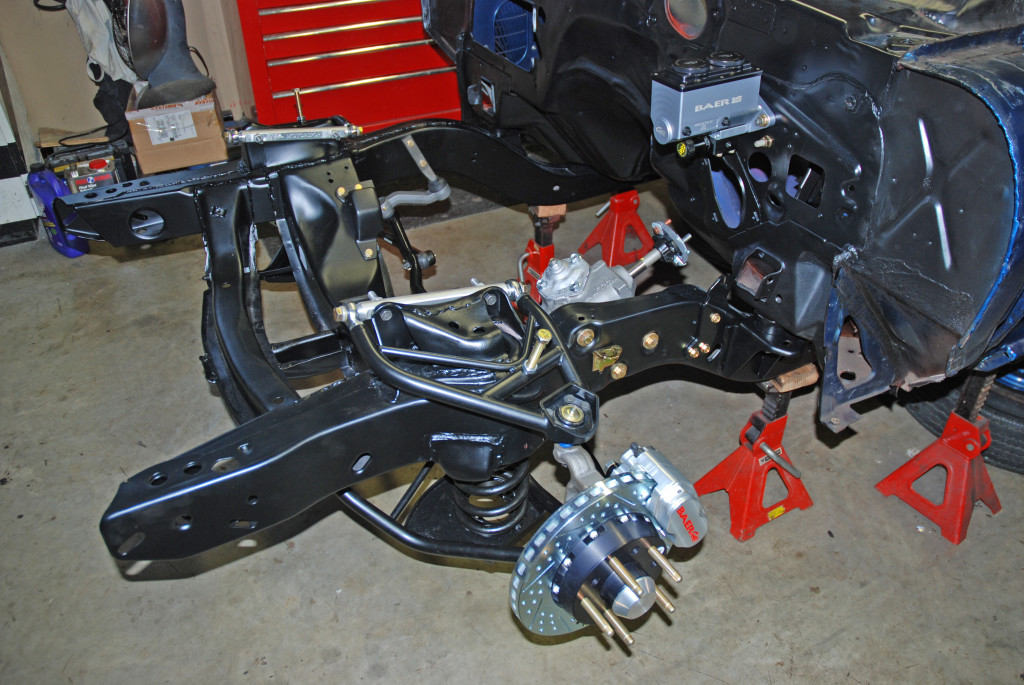 Last time, we introduced you to our Camaro/Nova drag race subframe build.  If you rewind to that past article, you’ll find we zoomed in on the bare bone subframe, discussed the prep, and had it powder coated.  Then we installed it with a set of billet aluminum mounts from Classic Industries.  We wrapped it up with a quick method to square teh subframe to the body (or vice-versa).  In this segment, we’ll continue the build, but we’ll turn our attention to the suspension and steering.

On a first  gen Camaro (or Nova sister ship), the upper a-arms are held in place with a set of studs.  They have knurls near the head, similar to a wheel stud.  Most used jobs are well past their best before date.  New examples are the way to go, but you won’t find them at your local bolt supply place or auto parts store.  Classic Industries sells them, and they’re easy enough to install: Slip them in from the back and lightly tap the head with a hammer and a punch to seat them.  When you install the upper a-arm, the nuts (which by the way are included with the Classic kit) will pull the studs into place as you’re tightening them.

If you don’t know already, there are three general styles of production line frame (engine) mounts used on first generation Camaros and 1968-72 Novas:  Six cylinder, small block and big block.  You can physically install any engine on any mount, but there are differences: The big block mount moves the engine laterally within the engine compartment (offset to the passenger side).  The driver side mount is also taller than the passenger side mount.  If you use (for example) a six-cylinder frame mount with a rat motor, then expect some header grief.  You’ll also experience some additional excitement when it comes time to reach the bellhousing bolts.  Finally, if it’s a stick shift combination, the clutch linkage (including the z-bar) components are different for big blocks and for small blocks.  Keep that in mind.

Since we’re using a BBC in our car, we elected to use a set of big bock frame mounts.  Classic Industries sells them in a set of two, and it’s a simple matter of bolting them on the subframe.  One word of caution here: Bolt them on before you install the a-arms.  Access to the nuts is a whole bunch better.  You’ll note in the accompanying photos we used -6 AN lock nuts, flat washers and bolts to attach the mounts.

Moving backward: Since the engine is in a different position when compared to a small block, you’ll need the appropriate transmission crossmember.  Here, there are multiple combinations: Big block stick and big block TH400; Small block s tick and small block TH400.  Powerglide and TH350 cars use the same crossmember as stick shift cars.  You’ll also need the right transmission cushion (mount).  Stick shift, TH350 and Powerglide combinations use a common mount.  TH400 models have a separate mount.  Where do you get this stuff?  Again, Classic Industries proved to be our one-stop shop for these parts.  By the way, we’ll likely use solid motor mounts for our rig, but we never use a solid transmission mount.  That’s simply asking for transmission case woes (split cases, fractured tail shafts, etc.).

So far so good.  There are a lot of ways to steer your car.  Sure, you can swap to a rack and pinion arrangement.  It offers a lot of advantages, but a rack swap isn’t exactly a bolt in.  We definitely wanted “bolt-in” parts.  Our car was originally a power steering car.  We (obviously) didn’t want or need the heft or complexity for a drag race combination.  So out it came.  In its place wnet a new Delphi manual steering box from the folks at Classic Industries.  It’s a very simple bolt-in arrangement.  Remove three bolts from the frame, drop out the old steering box, and reinstall the new box.  That’s the easy part.  But the next issue is the pitman arm.  Manual steering box pitman arms aren’t exactly wrecking yard parts (anymore).  You’ll need a good reproduction.  Like the other bits, we picked up our steering box and pitman arm from the folks at Classic.  Before you install it, center the steering box (basically, mark the shaft, count the turns lock to lock and turn it back ½ way).  Point the wheels straight ahead and only then should you install the pitman.  It needs big torque to tighten to specs (140 foot pounds according to a 1969 Chevy Service Manual).  It’s not a good idea to re-use an old lock washer here.  Classic sells new pitman nuts and lock washers for the steering box side.

The final big piece we’ll cover in this issue is the idler arm.  We added a new example, again from Classic Industries.  You’ll note in the photos, we used -6AN fasteners (lock nuts, bolts, washers) here too and sharp readers will see we installed the bolts “backwards” – heads to the engine compartment side.  There’s only one reason for that, and that’s because it adds a wee bit more clearance within the engine compartment.

If you look closely, you’ll see that in addition to the AN fasteners, a number of the fasteners and little brackets on the subframe were plated.  We used a local outfit to zinc plate those pieces.  If you copy the idea, one thing you should keep in mind is that the plater needs them clean.  To get there, we spent plenty of evenings behind a bench grinder fitted with a wire wheel.  It’s messy, but that’s how we removed over 40-years of accumulated crud.

Next up we’ll install the upper and lower control arms and finish the steering.  Stay tuned.  There are some serious things added to the mix.

Find other parts of this series here: