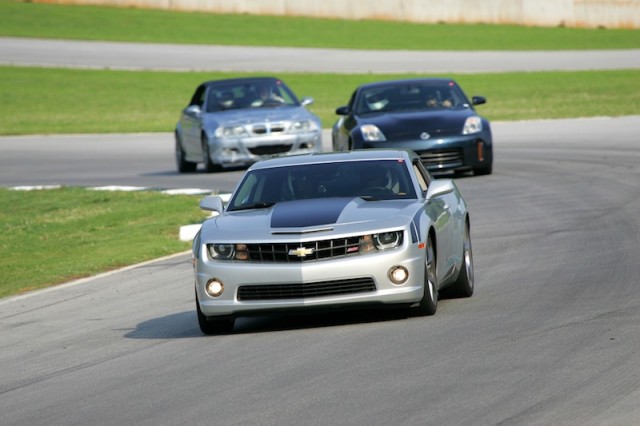 Listen to a group of car fans chatting outside a coffee shop, and inevitably one will mention the modifications made to their car. The chat then bounces back between suspension, engine modifications, seats, and brakes, but not often enough do they converse about tires. Tires are the most important performance modification one can make if they’re interested in finding more speed, more fun, and building driving ability. There are many men who will take their car to the track, grow bored with the straight line ability, upgrade to a monstrous powerplant, and find that their lap times hardly improve, because they’re not cornering any harder. To find the limit and improve on-track performance, a set of performance tires can make worlds of difference.

A sticky sport tire is a complicated thing, however, since it’s not a true racing tire. These tires must be more versatile than a slick, last longer, and is generally well-received if it offers some sensation of slip at the limit of adhesion. Contrast those requirements to that of a racing slick, which needs to offer grip and if it can last slightly longer, good, but it’s not a necessity. Perhaps people don’t realize how incredible modern tires are, but after a quick lap riding shotgun with a pro at the wheel and some semi-slicks on the ground, they’ll change their mind.

High performance sport tires, some of which are referred to colloquially as “R-compounds,” can help illustrate just how much cornering grip a car – especially a modern sports car – is really capable of. Thanks to improvements in suspension technology (read: body control), cars today can really exploit what an R-compound can offer. This means that tires can be designed with ultra stiff sidewalls that allow for sharper cornering, better direction change, and ultimately much more grip at the limit.

While the stiffer sidewalls help increase the size of the contact patch – the actual portion of the tire on the ground – much of this performance comes from the tread pattern, or lack of it. Obviously, the more rubber on the road means more grip, so many of the more dedicated sport tires have as little in the way of sipes and grooves to increase the surface area. This construction also has the benefit of less tread mobility, and therefore greater stability at speed since the tire does not move much.

However, what’s important to understand about tire rigidity is that it means a more consistent feel through the steering, suspension, and the driver’s backside. This allows a more transparent relationship between car and driver, and therefore the limit can be approached with more information, and thus more confidence.

So with added rigidity and responsiveness, the sport tire also benefits from higher operating temperatures. Naturally, a tire driven hard, with the influences one experiences on-track, will generate a considerable amount of heat, but it can handle it. Many R-compounds, designed for the abuse, work well within the range of 160 F to 220 F, and will resist blistering, largely due to the compound itself and the construction – a more rigid tire that moves less will not accumulate heat as quickly.

Despite a minimal necessary amount of grooving for water dispersion, there isn’t much about the tire that is really suited for everyday driving. This begins the list of setbacks one must contend with when running these tires.

However, aside from the obvious price increase, those few grooves, sometimes only 2 as per DOT requirements, don’t do much to relieve the tire of much water. Therefore, while the sportiest tire will technically function in the wet, they are strongly disadvised for heavy rain and certainly against standing water. They simply hydroplane in these conditions, and regardless of one’s driving skill, it’s hard to save a slide when the tire is floating above the surface of the road.

Though they can’t be considered too ineffective for the street, the sport tire can also suffer from a need to be at ideal operating temperature. Because of the soft compound and the rigid construction, the tire is typically quite greasy at low temps, and this means that even on cold days, it’s not uncommon to lose traction in a semi-unpredictable manner. The tires need to be brought up to their operating temperature before they really work, so fitting one on a daily driver in Wisconsin isn’t a great idea.

Additionally, one downside to an exceptionally rigid tire construction, though this is often thought of as a function of higher levels of grip and chassis rigidity, is that the limit, when reached, is more abrupt. In other words, a car fitted with R-compounds will behave more like a racing car on the edge of adhesion, which is to say it’s a bit snappier. This situation requires a delicate touch and a bit of preemption, since the lack of tread blocks and a sidewall that refuses to deflect means fewer signs of an impending slide.

Of course, a soft, sticky tire won’t last long, but that’s not why these are purchased. A set of sport tires can be fitted to track-only wheels and kept off the highways, and reserved for the weekends. The track tire is typically a little louder, and won’t always work well in inclement weather. However, when the sun is shining, and the track is open, there’s very little that can surprise you, and give you added respect for your car’s ability, like the addition of a set of sport tires. They’re edgy, and nervous, but when they can be exploited, the rush of driving goes
through the roof.

Plenty of cars come shod in tires that aren’t far from a full-on racing slick.