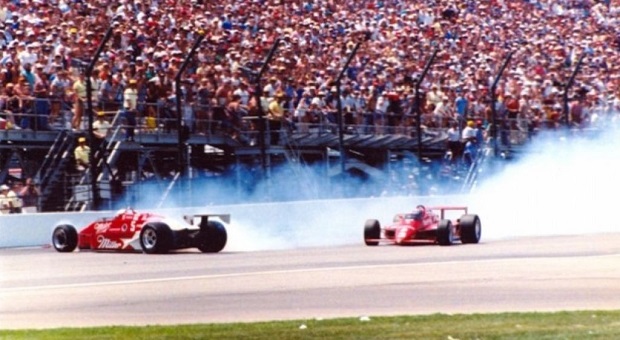 There come points throughout a driver’s career, if not during every race, where they have to take evasive action and make several important decisions in a very short period of time. At which point does a driver decide to accept that a slide is beyond catching, and how do they know which way to go to avoid a competitor who’s spun off ahead of them? How do they develop that level-headedness in a tense, potentially expensive situation to make accurate assessments of not only their own vehicle’s behavior, but the behavior of their opponents?

Where one’s own car control is concerned, it obviously helps to have plenty of experience in a particular car – testing and practice will familiarize a driver with the limit, how progressive a car is towards the edge of adhesion and what idiosyncrasies their car has; how not to upset it. Generally speaking, edging towards the limit without any abrupt inputs is always a way to avoid getting into an unpredictable or unrecoverable spin/half-spin situation – especially in the wet.

Once the car breaks away, a driver needs to feel how quickly the car is rotating, how much grip they have underneath them and whether it’s advantageous to correct a slide – sometimes, particularly on ovals, it’s safer to let a car spin down away from the walls. However, most of the time it’s better to try and save it, if possible. Experience with the car and learning its limits is imperative here, but so are quick reactions and coordination. Unfortunately, you can’t learn faster reactions, but you can learn how to avoid putting the car in a potentially hazardous situation—besides, even the most talented drivers, without some discretion, will eventually put their car into a situation they can’t recover from. Learning how to hold back slightly goes a long way.

Things get a little trickier when another car is involved. A clever driver will often hang back when they notice a squabble between two other drivers ahead of them, and bide their time. If the leading two make contact or one makes a mistake, the clever driver can seize upon the opening and take a position without having to do much work. Determining how much space to leave between the drivers depends on the speed, the shape of the track and the character of the drivers. Again, experience helps here, since a wild driver should occasionally be given a slightly wider berth if they’re prone to spinning off, throwing dirt or generally causing chaos.

The problem is that, occasionally, they spin off into the path of the following driver. Now, not succumbing to target fixation is critical. When this occurs, a driver needs to make a decision and commit to it. Sometimes a car will spin, find some grip and fire back into the other direction. Obviously, it’s challenging to predict which way a spinning car ahead will go, but a following driver needs to pick the gap which is safer very quickly, focus and make the steering inputs as quickly as possible without panicking. This, again, comes down to car control and a calm head, but spatial awareness is more valuable here than with correcting one’s own mistake – and as always, a little luck goes a long way.