Ford’s venerable nine-inch rear end is well-known as one of the best rear ends for high performance vehicles to come from an auto manufacturer. Sure, you can go out and buy a rear end/differential from someone like Eaton, Moser, or Strange Engineering. However, if money is any sort of an issue for you, you can simply go down to your local pick ‘n’ pull junkyard and grab a Ford nine-inch out of an older Mustang or even an old Ford truck and at least install new axles in it.

You’ll have something just as good as, if not better than, what you can get for hundreds of dollars more from an aftermarket supplier. This article will cover the steps and tools required to install new axles, bearings, and seals in your older Ford nine-inch rear end. Next week I’ll go over the steps and tools required to change the rear gear ratio, which is something you’ll want to do if you plan on taking it out on any sort of track, whether that be a drag strip or a NASCAR-style oval track.

Tools and Equipment You’ll Need for This Project 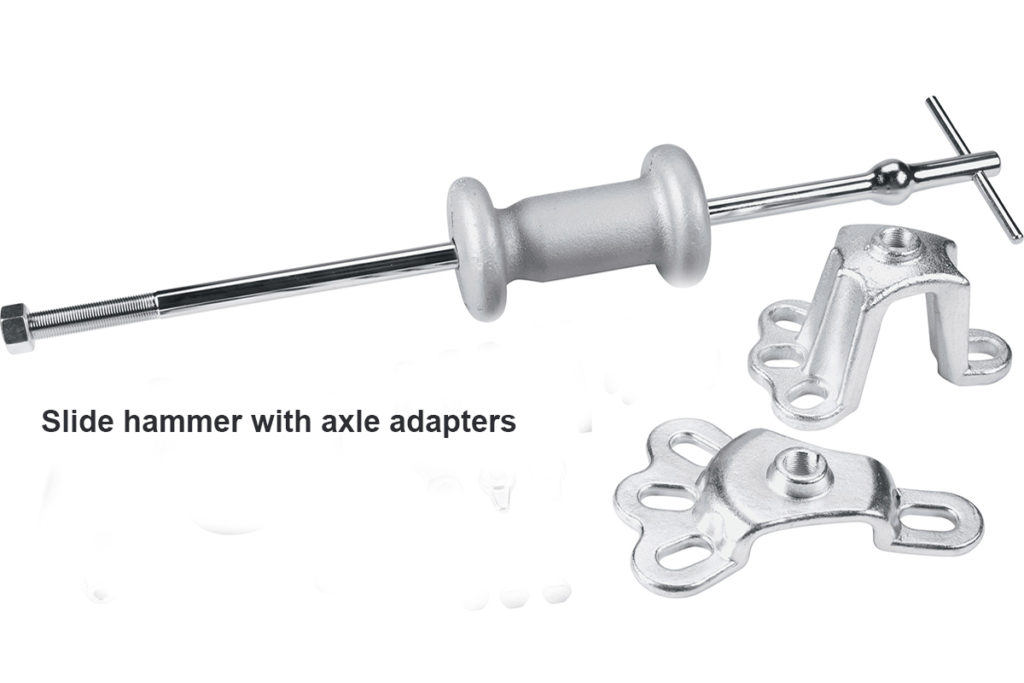 First, you’ll need a jack and two jack stands. For the newer Ford rear ends, you’ll also need a two- or three-jaw puller to remove the old seal. You should use a seal installer to install the new seal. To get the axles out, you’ll need a lug wrench to remove the tires and a socket set and ratchet with extension. You should get a set of studs and lug nuts for the new axles. In order to ensure a long and problem-free life for your new performance axles, you should also install new bearings and seals. If the axles have never been out of the rear-end, you’re probably going to need a slide hammer with an axle adapter to start the axle on its way out of the axle housing.

Brace the Front and Raise the Rear

Park the car on a flat and level surface and put the transmission in Park or first gear. Do not set the parking brake. Using two pieces of 2X4 (or wheel chocks), block the front and rear of one front wheel. Place the jack under the differential housing and lift the car until most of the weight is off the rear wheels. Finish lifting the rear of the car until the wheels are clear of the ground. Remove the lug nuts, tires, and brake drums.

Remove the Retainer Plate and Axle 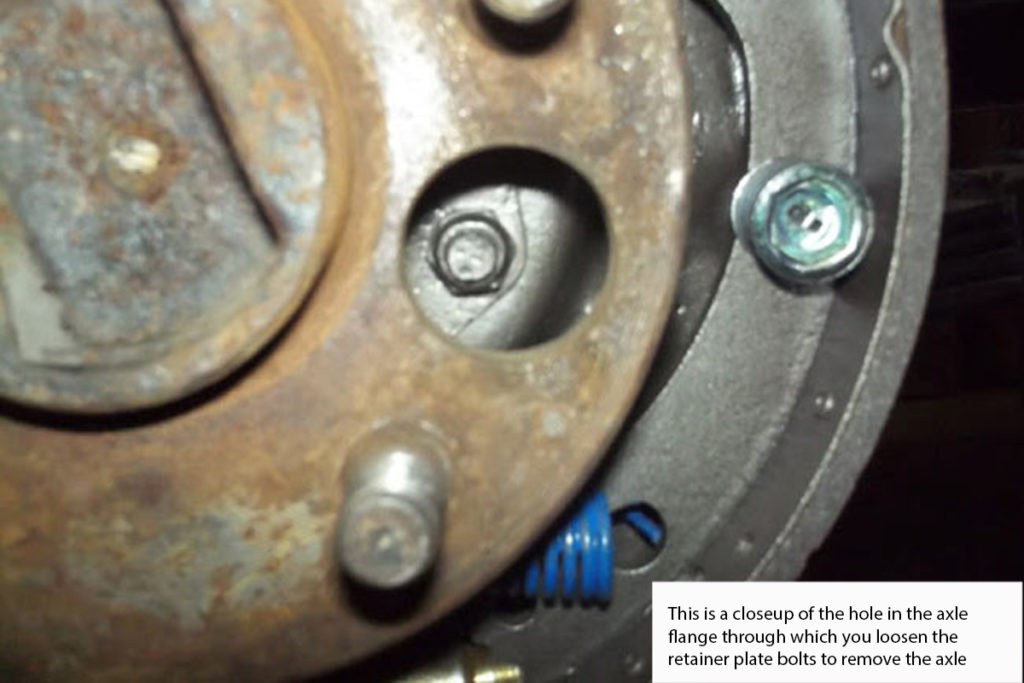 Grab your 5/8 inch socket and attach it to your ratchet with a (minimum) three-inch extension. Check out the lug nut flange on the end of axle and locate the hole. Rotate it to about the two o’clock position and fine tune the positioning so you can see the nut behind the flange. Remove that nut using the ratchet and socket. Keep rotating and removing the retainer plate nuts until you get all four out. Now, simply pull the axle out. 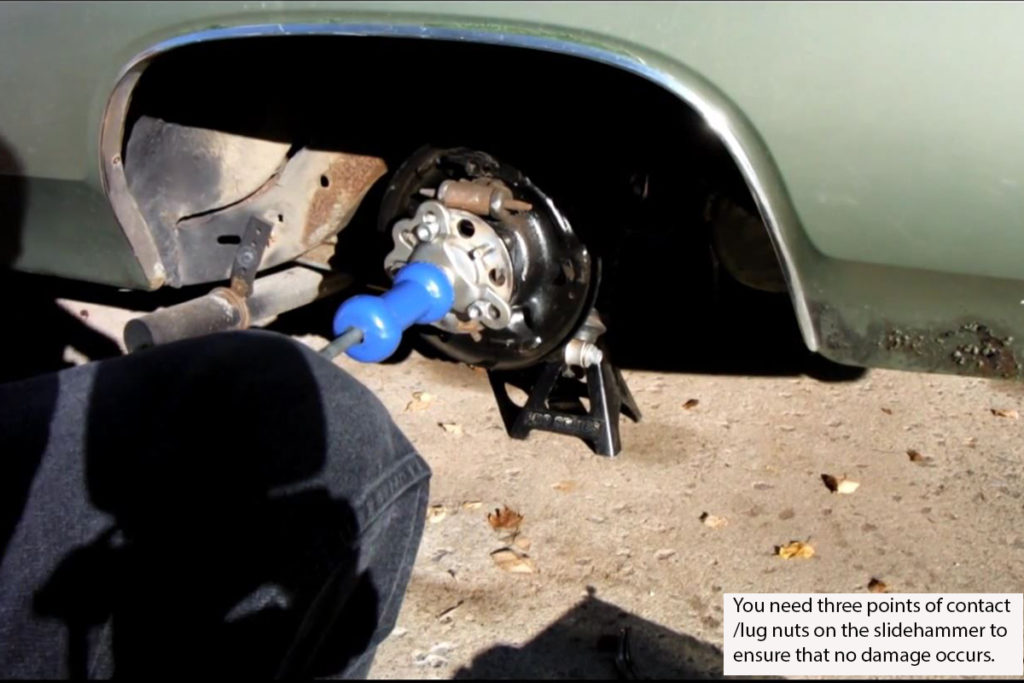 If the axles have never been out, there’s a good chance that you won’t be able to “simply pull the axle out” as I stated above. In these cases, you’ll need an axle puller. This is a flanged tool which is attached to a slide hammer. There are three bolt holes on one side and a single hole on the opposite side. Slide these over three lug studs and tighten lug nuts onto them. Then “slap” the weight (the hammer) of the slide hammer against the stop until the axle is loosened enough for you to remove it by hand. 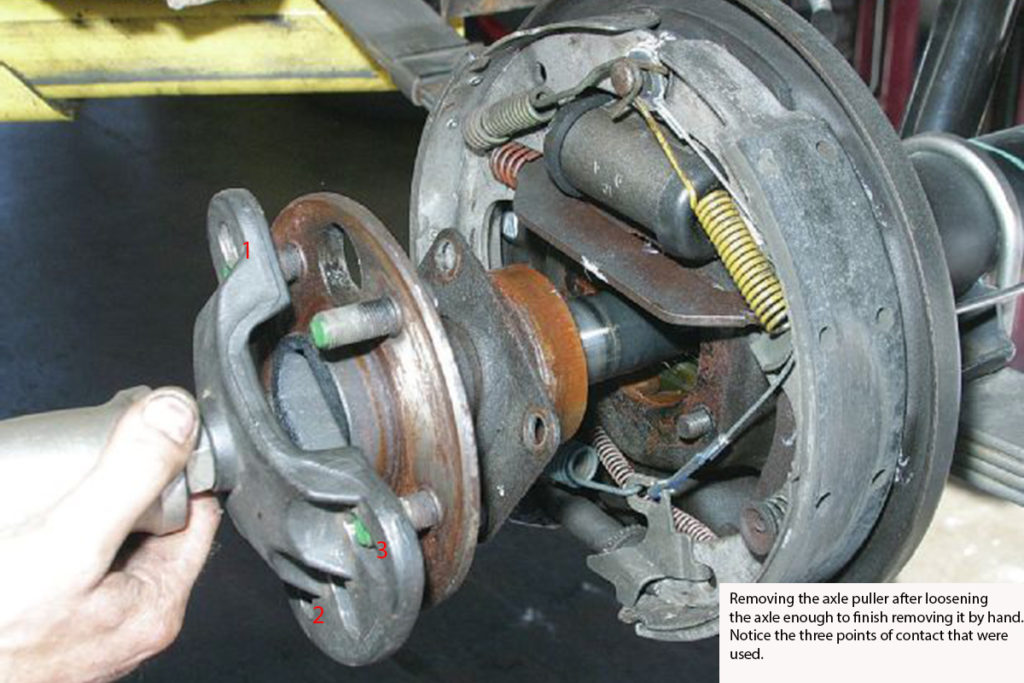 Take the Axles to a Machine Shop 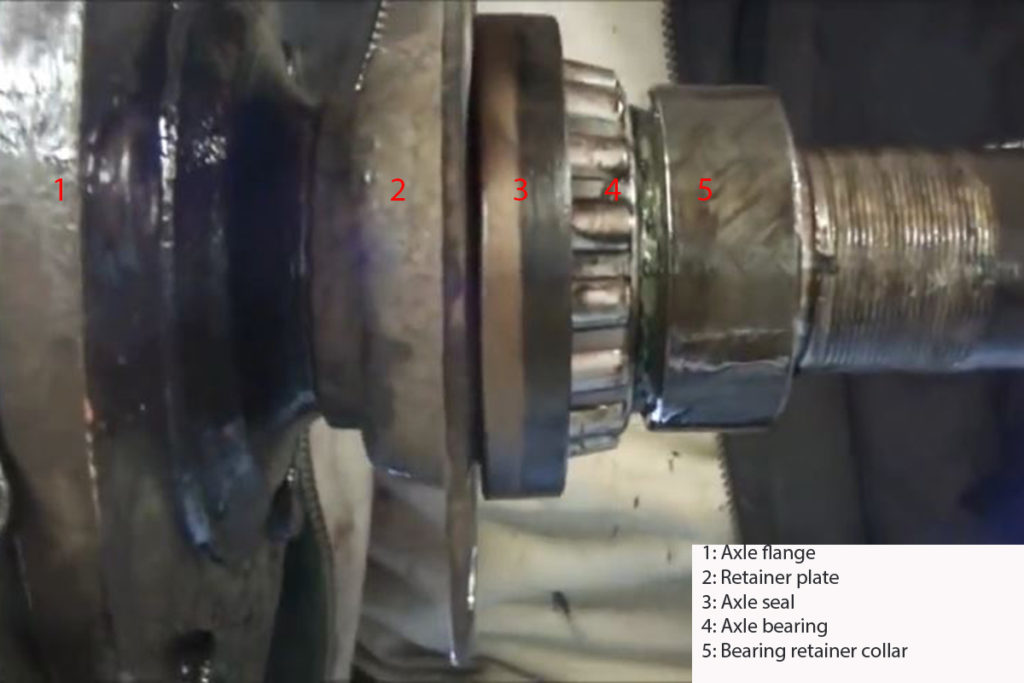 Most of us don’t have a ten ton tall press in our garage workshops. The bearing and seal on most older axles for Ford nine-inch rear-ends have to be pressed off. Get both axles out and haul them over to the machine shop with the new axles, new bearings, and new seals. The shop will press the bearings, seals, and retainer plates off the old axles and assemble the new axles for you. 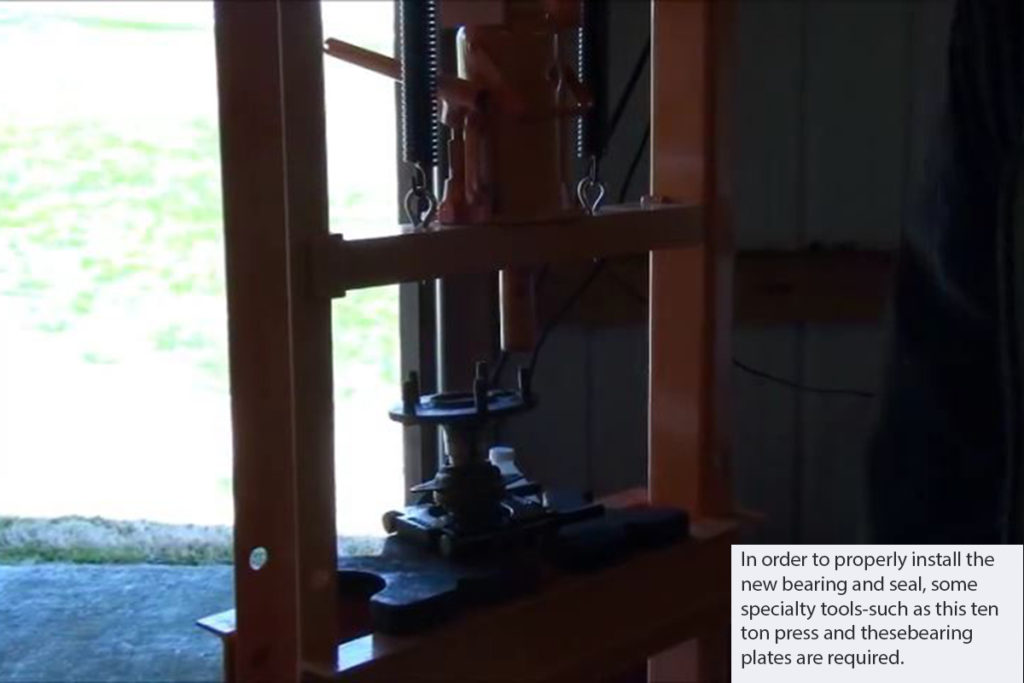 I recommend that you also have them install new lug studs on the axles for you. Yes, you can have them press the old studs out and back in, but it will be cheaper in the long run to replace the old studs – less labor cost.

If you want, you can “press” the new studs in yourself. After the axles are installed, lock the transmission in gear or Park. Slide a stud into one of the holes on the axle flange, add a few heavy duty washers, and thread a lug nut on backwards. Once that’s done, use your lug wrench to tighten the lug nut until the back of the lug stud rests against the axle flange. If you’ve got wind and an impact gun, use them. If you have a large bench vise and a deep impact socket, you can press them in that way also.

Ensure You Get a Good Seal on the Axle 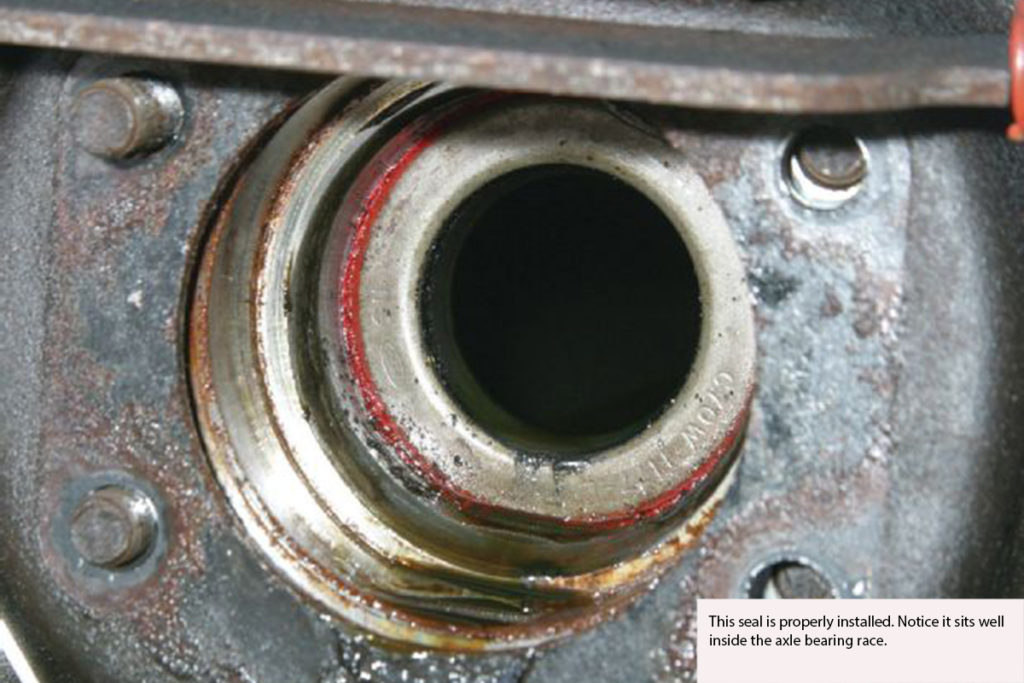 On many rear ends that were built after 1970, the seal is installed inboard in the axle housing from the bearing. This means that you’ll need to remove the seal separately from the axle (See image below heading above). You’ll need to attach a seal puller adapter to the slide hammer (pictured above) to remove it. You’ll also need a special seal installation tool (image below) to install the new seal. Just be sure to choose the correct sized adapters when performing these actions. 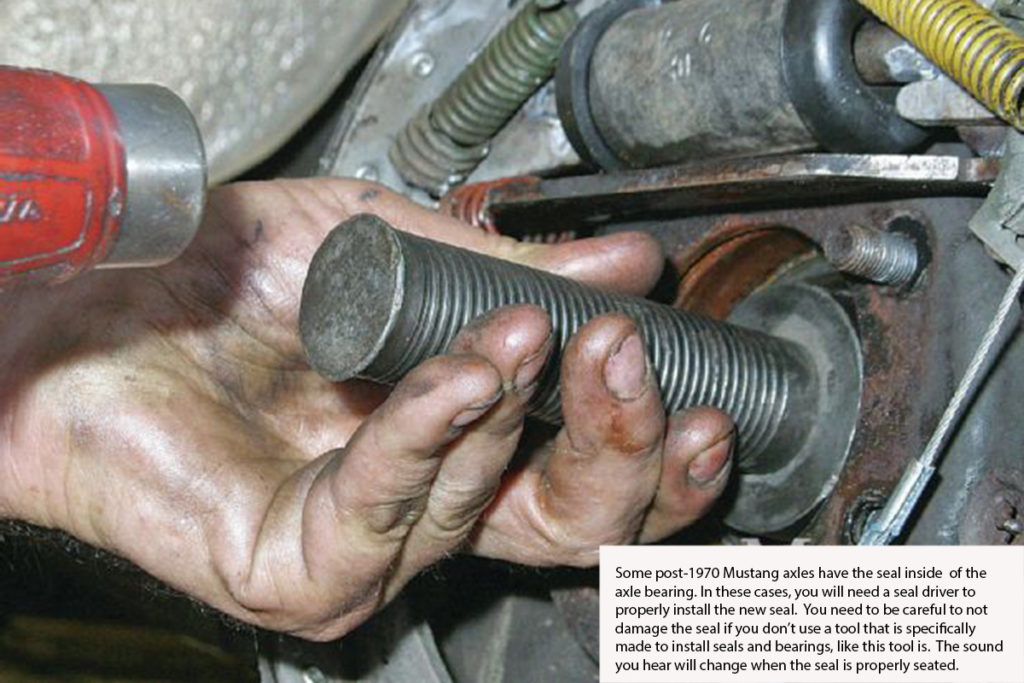 Soak the edge of a rag with a good cleaning solvent – I prefer Brakleen, but you can use your favorite. Use this to thoroughly clean the bearing race and sealing surface in the axle housing. Be careful not to wipe the RTV off the faceplate. 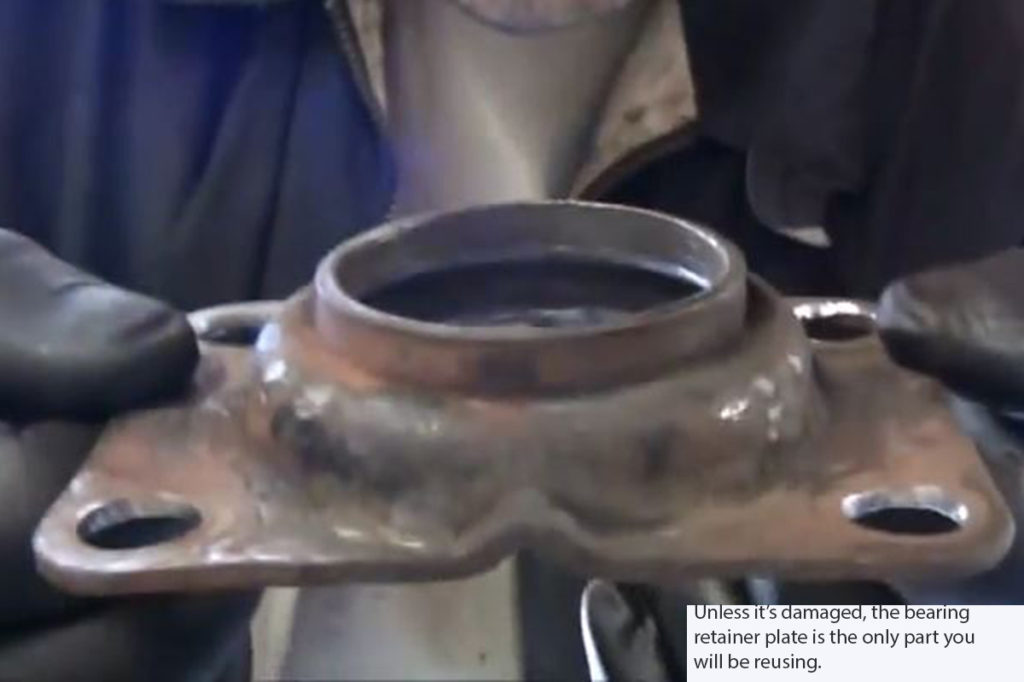 Slide the end of the axle assembly into the axle housing, taking care not to nick the sealing surface, bearing race, or splines. Align the retainer plate with the notch (See image above) pointing down and push the axle completely into the axle housing until the bearing plate bottoms out, making sure you align the holes in the plate with the four retainer bolts. Thread the four nuts onto these bolts by hand. Tighten them down in a crossing pattern-for example, top right to bottom left to top left to bottom right. This keeps the retainer plate from becoming cockeyed, which will cause leaks. 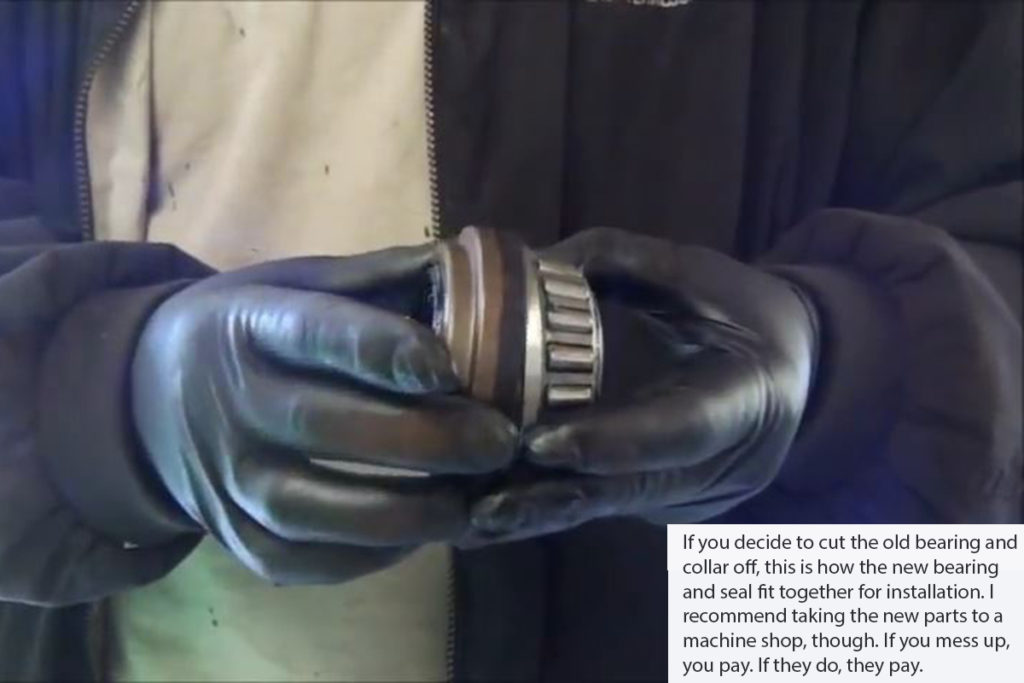 Reassembly time. Slide the brake drum over the axle flange and lug studs. Hang the wheels and start the lug nuts, snugging them down as much as you can. Slide underneath with your ratchet and extension and a bottle of the proper gear oil. Locate the differential plug near the top of the housing and remove it using the ratchet and extension. The shorter the extension the better, because the fitting in the plug is usually somewhat loose and a longer extension can introduce sheer forces that can damage it. Stick your little finger into the plug opening to the second knuckle. If you don’t have gear oil up to the first knuckle, add gear oil. If you do, reinstall the plug and move on.

Slide the jack back under the differential and raise the car off the jack stands. Pull the stands and slowly lower the car until the tires start taking weight. Using a star pattern, finish tightening the lug nuts and lower the car the rest of the way. Test drive the car, listening for any moaning or groaning or squealing coming from the rear of the car. 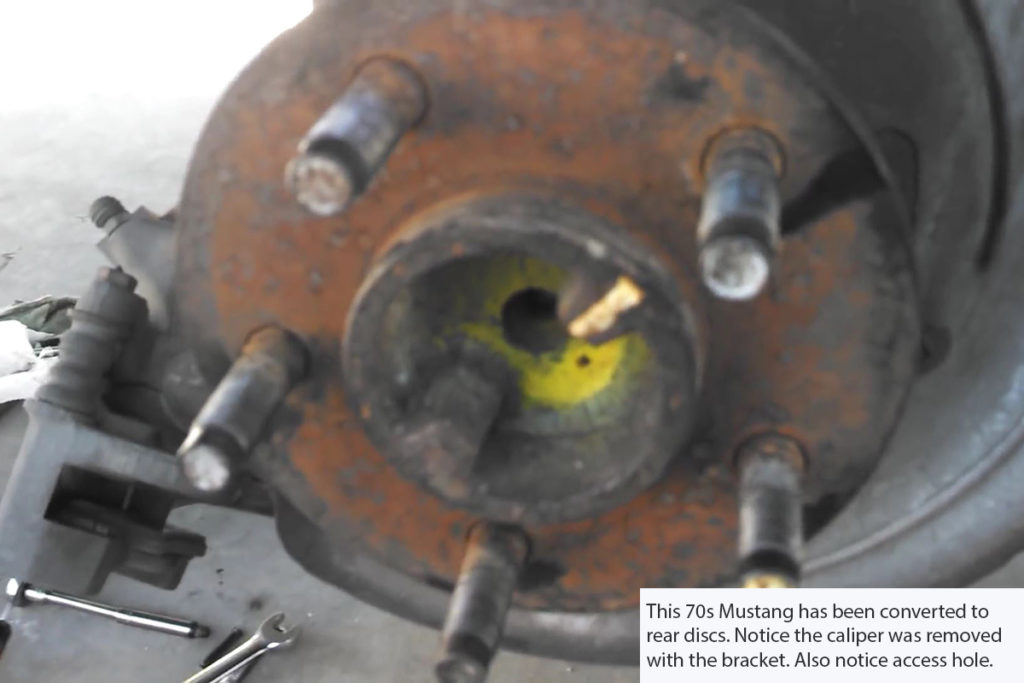 Most older Ford cars that have been converted to rear disc brakes will have floating rotors. To change the axles, you will need to pull the caliper and use a wire or twine to hang it so there is slack in the rubber brake line. The rotor should then slide right off like the brake drum would, only easier. Some axle flanges on these cars won’t have the access hole, which means you’ll need a box end wrench to reach the retainer plate nuts to remove them.

NOTE: If the retainer plate nuts are crusted with rust, I recommend soaking them with a quality penetrating lubricant like Liquid Wrench or WD-40 and allowing them to soak for about 30 minutes.