Jay Roeder spent a lot of time working on his project Mustang and getting it absolutely perfect. He even took the time to create and install custom hedders for his Mustang and has given us step-by-step instructions in case you ever feel you want to do the same. It’s not easy, but it is worth it!

Hedman Hedders began as a one man shop back in 1954 with founder Bob Hedman selling his highly sought after exhaust tubes to fellow racers on the salt flats of the Mojave Desert. But pretty quickly, this turned into the premier hedder manufacturer for both the racing and street hedder marketplaces. Hedman’s reputation grew quickly and he became known for building hedders that gave you the best boost in power for your dollar. Pretty soon, Hedman Hedders was the brand of choice among racing’s elite engine builders, racers, and race series. Whether you’re a Pro or sportsman racer, Hedman Hedders builds your hedder with one goal in mind: optimum performance. Even if you’re not a racer, the lessons Hedman learns at the track and on the dyno make it into every street hedder they design. 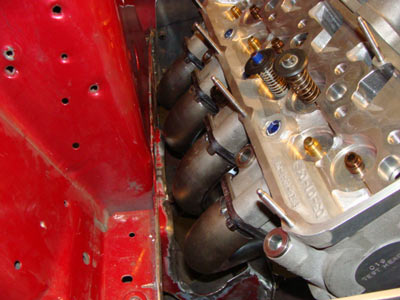 In this particular article, Roeder shows us what it takes to make and install custom headers. In his case, he decided to build custom headers because he had trouble finding headers that would fit correctly. He experienced not having much room to navigate between the hedders and the inner fenderwall, so he used a NASCAR-style engine with Yates D3 heads, a 9-inch deck hieght, and custom engine mounts (plates) and locations. This was what led him to the realization that he was going to have to fabricate his own headers.

Roeder had already created his own headers on a previous vehicle, a tube chassis-style car, and it wasn’t such a big deal since you can get to everything with relative ease. However, on a car such as his Mustang with the full factory front sub frame and inner fenders, things tighten up quite a bit.

Because of the anticipated horsepower of the engine and the RPM it will turn, he decided to build rather big headers by most standards. He ran a few simulations on his engine modeling software and talked to some HP gurus and decided that it’s better to err on the large side as opposed to building one too small.

Roeder believes that the length of the primary tubes and the length and design of the collectors is more important than the diameter of the primaries as long as they aren’t too small. Not bending the tube immediately after exiting the port was an important step to making power. 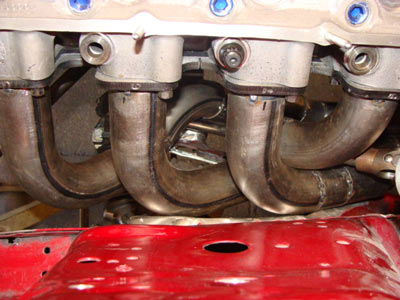 Another detail that was very important during this installation was the initial bend of the primaries out of the heads. You can have the big tubes, but if they take an immediate 90-degree turn out of the port, the exhaust hits it like a wall and defeats the purpose of having custom headers.

Being “armed and dangerous” with knowledge and ambition, Roeder was ready to get started on this project. The first thing he did was look up a couple different header manufacturers to see what was out there. Everyone makes “J” tubes, 90-degree bends and such, but he wanted to find flange plates that fit Yates-style heads. He wanted the plates to have factory installed and welded header “stubs” so that he could slip the new tubing over the stubs to help locate and secure the header tubes during fabrication.

He eventually found what he was looking for from Hedman Hedders. Not only did they offer exactly what he was looking for and have extensive background in this type of thing, but they also offer weld up kits that fit certain engines with certain chassis that allow the builder to make custom headers out of a sort of pre-bent kit.

For the flange plates, he went with part #11430, which is listed as Ford SVO 351 (Yates Style) and they have 2-inch diameter stubs factory welded to the 3/8″ thick flange plate. The 2-inch stubs were a perfect slip fit for the 2-1/8″ tubes to slip over and he only used about a half inch of the stubs, so there was no real obstruction considering the exhaust ports in the heads are 1-3/4 inches.

What really sealed the deal for Roeder was that the port openings in the flanges are a perfectly round hole that matches up beautifully with the round exhaust ports in the Yates D3 heads. The older style Yates C3 ports were more similar to a stock 351 Cleveland in that they were kind of a rounded rectangle shape. But these flange plates work great with C3’s also. The D3’s exhaust ports are raised slightly higher on the heads, but the bolt pattern is the same. So on his heads, the very top of the round openings of the flange plate are just at the top of the ports in the heads.

The function of these pieces is great, but to make it even better, the finished port work the people at Hedman do is impressive.  There was no weld slag or jagged edges in the opening and the transition from the plates to the stubs was smooth and well blended, and the flat surface of the flange is flat because it is belt sanded.

After getting it all put together and installed (after about 25 hours of work), it turned out pretty well. Check out the rest of the article and links to the rest of the Mustang project in Hedman Headers’ website.

So if you’re having trouble finding headers that fit perfectly for your project, or if you want crafstmanship that leaves nothing to be desired, check out the products from Hedman Hedders. Having big headers is better than having them too small, so make sure you have exactly what your project needs to succeed!