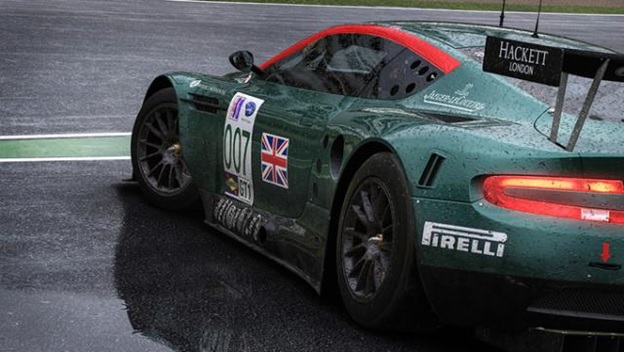 When the heavens open up, the clever drivers have probably already switched to rain tires. For longer races, this approach is the only consistent way to ensure points, and the smart drivers know that their rain tires need to be treated with a special sort of respect if they expect to perform in adverse conditions.

While the rain line is constantly variable and changes from lap to lap, the rain tire’s physical limitations and requirements are fixed. Because they use tread blocks with serious sipes and channels, the flex of the tread block,and the softer compound often used with these tires are traits that contribute to increased tire wear and heat. Therefore, even in the pouring rain, a racing car with the ability to generate real cornering grip is capable of destroying a set of tires very quickly if they’re not treated properly.

The specific conditions to which rain tires are subjected make for a challenging experience. One one hand, a driver who excels in a deluge knows that smooth, gentle inputs are the only way, and that coincides with generally lowered tire temperatures. Thus the compound used in rain tires is typically much softer to bring them up to temperature faster – and the trick of finding the right temperature begins to appear.

Not only must a driver be cautious, they must drive quickly enough to get the tires to their working temperature if they want to win. To further compound the issue, the right line has to be followed, and as ever with rain driving, finding that line is a real chore. The reason for this is the temperature range in which the rain tires work is somewhat narrow, and they can easily disintegrate if driven off-line.

When the rain is coming down constantly, the tires are slightly easier to manage. Certain parts of the track will not overheat the tires, as the water is equally-distributed over the surface, theoretically. However, their temperatures will rise dramatically when the track begins to dry, and they must be driven in a very specific manner.

As a dry line begins to form and the driver is unable to avoid it for fear of losing time, they must keep in mind that the rain tires are not designed to last on a drying surface. The added levels of grip combined with a soft compound and the sidewall flexing will drastically overheat the tire unless it is periodically cooled, which can be done by moving to drive over a wetter portion of the track. Preferably, this is done on the straighter sections of the track, and there it is also the safest. However, if the water is too deep, a car running wet tires can still hydroplane off the road, so some discretion is required when picking the right puddle on which to cool one’s tires.

One can do plenty of things to alter their tires slightly to improve their performance on a sodden track. There are differing schools on tire pressure, but it’s agreed that lowering the pressure can allow the tires’ sidewall to roll slightly, which them somewhat more progressive on the limit. More certain is the value of hard shoulders. As many drivers shave their tires slightly to meet requirements for a race, making sure the edges of the tire, also known as “shoulders,” are relatively sharp can pay huge rewards. That sharpened edge gives the tires the ability to scythe through, and push away, the water that sits in front of them. As the race goes on, they will naturally wear softer and lose their incisiveness, but hopefully, by that time, they’re carrying a car that has run off with the lead. 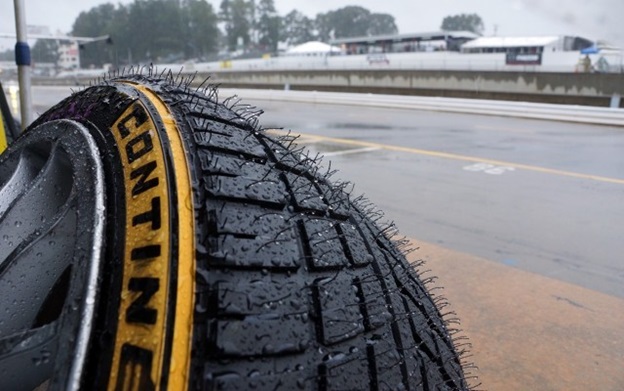