RacingJunk News > Racing > Drag Racing > Is Carburetion or Injection the Way to Go? 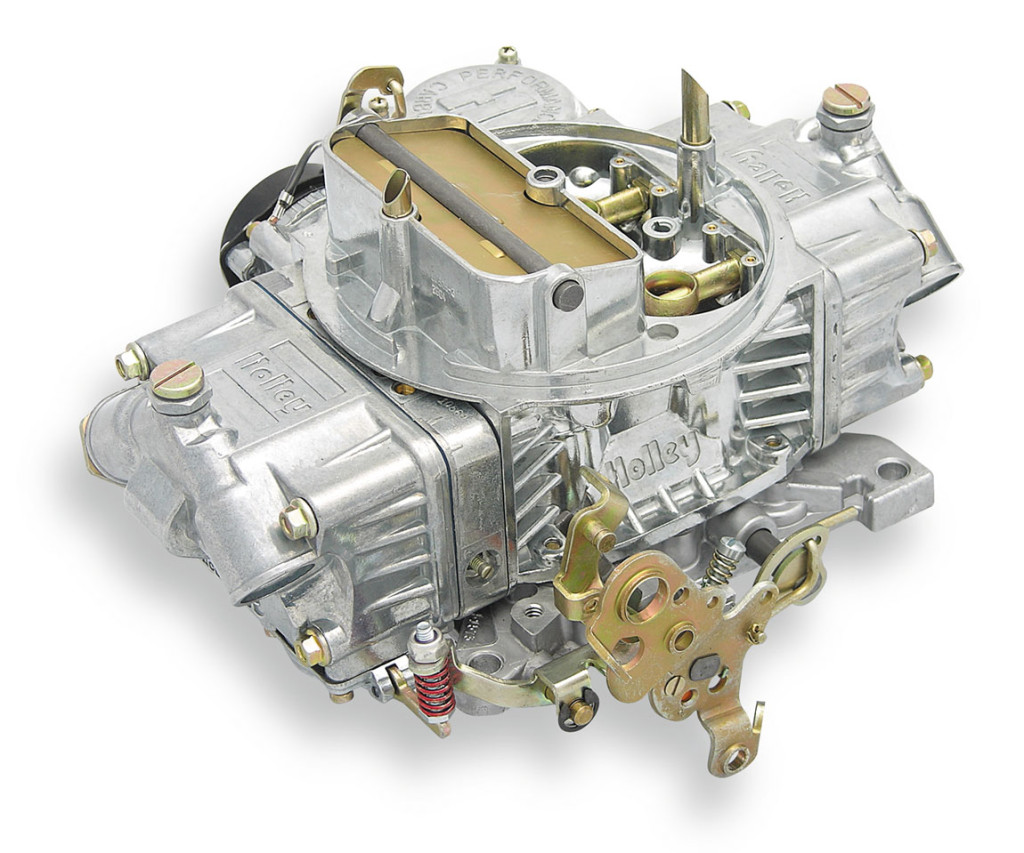 When I started building performance engines for cars a lifetime ago, we had two choices when it came to getting the air and fuel into our engines: We could choose a carburetor or we could choose a bigger carburetor. Fuel injection, while it had been around for a while, was still in its infancy and not accepted by the rodding community. Now we have to decide, usually during the design process, whether we’re going with a carburetor or with injection.

Carburetors Are Easier to Adjust

This was true back then, and it’s still true today. To adjust a carburetor, all you really need is a small screwdriver and a good ear. “Back in the day” I was taught to adjust a carburetor by placing a glass of water on the fender and screwing the air-fuel mixture screw in until the engine started to stumble or run rough-the water in the glass would vibrate. Once that point was reached, you backed the adjuster screw out a quarter turn and you were done.  Unless you want to get “fancy” and use O2 sensors, carb adjustment is still that easy.

Fuel injection is more difficult. Sure, you can buy adjustable pressure relief valves/regulators and you can buy super high pressure fuel pumps to help get more fuel into the combustion chamber. However, tuning the system, really tuning it, requires a computer hookup with an ECM programmer and a programmable ECM/chip. You’ve got to watch the dwell for each individual injector. You’ve got to watch the pressure at which the regulator pops and returns fuel to the tank. With a carb, pop the hood, pull the air cleaner, and turn a screw and turn another pass. The only time carburetor adjustment gets tricky is if you have multiple carbs. Then you’ll need a special carb balancer tool. Mine’s in my toolbox, just ask, I’ll probably loan it out.

When FI first hit the scene, the amount of air and fuel that was flowed to the engine was insufficient for truly strip burning power. Again, sure you could bump up the fuel pressure, but the air inlets were pretty small, while the good old carburetor flowed almost as much air as you wanted, and you could make more fuel flow simply by swapping out jets.

Most of the fuel injection systems available these days for high performance engines will flow huge quantities of air naturally. You can go to any number of websites and order throttle bodies in a variety of sizes, allowing you to tailor the throttle body size to allow the amount of air your engine will need. Within certain limits, you can also buy injectors that will flow more fuel than stock injectors.

For those of us that are old school, nothing will beat a carburetor for a number of reasons. First, nothing beats the sound of secondaries (mechanical or vacuum) kicking open on a high speed pass.

Fuel injection just can’t give you that sound.

Some of us will also tell you that carburetors just look better sitting on top of an engine than fuel injectors that you can barely see. You’ve got that beautiful high-flow air cleaner poking through the hood. Sitting under that probably chromed air cleaner is the carb or carbs. Sure, you can toss a scoop on top of an engine that’s injected and it will almost look the same. But it’s not the same. There’s just something about that carburetor and the linkage to it that gets an old school rodder’s heart pumping in a way that injection never will.

Intake manifolds are another reason we old schoolers prefer carburetors. A carburetor wants a specially engineered intake manifold with equal length runners and, in our cases, usually a lift of two to four inches. Sure, there are some pretty cool intake manifolds for fuel injection, but by and large, the best looking ones are for big four barrel carbs and dual carb setups.

Fuel Injection Does Have Advantages 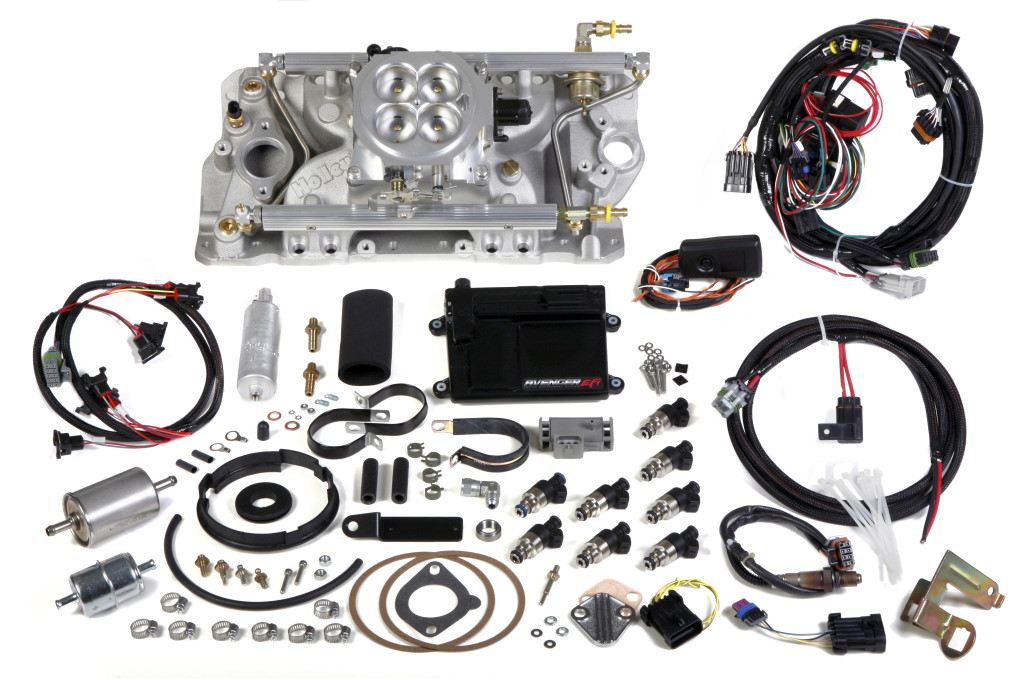 I can typically tell if a car’s engine is carbureted or injected just by smelling the exhaust as the car passes me. If I can smell unburned fuel, it’s got a carburetor. That’s because of the main advantage that injection has over carburetion: Injection atomizes the fuel better. Fuel that is more completely atomized mixes with the oxygen better and thus burns better and more completely. Because of this, injected engines can actually produce more power than carbureted engines. They also get significantly better gas mileage, when everything else is equal.

Fuel injection systems, due to the sensors they require to work properly, can also help you save fuel as the engine ages. The oxygen sensors in the exhaust will alert the computer if the engine is running too rich or too lean and make the necessary adjustments to keep the air-fuel ratio as close to perfect as possible. Carbureted engines can’t normally do that by themselves.

Rebuild an Injector When It Goes Bad?

When a problem is detected with a carburetor, like an internal leak or something, you simply call up your parts jobber and order a repair/rebuild kit. Rebuilding your carburetor will take most people about two hours to complete and run about $30 for the kit and cleaners. If you’re at the track and something happens, four nuts and a couple clips lets you quickly swap out for a new one.

If you’ve got a fuel injected engine and no expensive specialized equipment, you’ll first have to take it to a shop to have it diagnosed. Most likely, if you have a problem with an injector, if cleaning it doesn’t fix it, the only alternative to get your car running again is to replace the injector. That’ll be much more than $30 please and a couple hours, please. Develop FI problems at the track without professional help and equipment nearby? You most likely just forfeited your entry fee.

Fuel Injection on a Budget Is Tough

These days, the main reason I choose carburetion over injection is price, overall price. That includes the cost of buying and installing the parts, as well as maintaining them over their lifetimes. The Holley carb in the photo at the top lists for about $320, while the fuel injection system shown lists for ten times that.

The carb can be cleaned to return lost efficiency by dumping a bottle of carb cleaner in the tank, while, as long as you do it religiously, you can get away with the same technique for injectors. However, miss a treatment or two and you’re looking at a shop visit to at least buy the expensive injector cleaners you’ll need.

Everything else is cheaper too. You can go with a low cost mechanical fuel pump with even a super big carburetor, but an injected system requires an electric pump. There’s also all the switches, sensors, and relays involved that an injection system requires. The carb might need a wire going to it for the choke, but most modern performance carbs have mechanical chokes these days.

The choice between carburetion and injection is a tough one. They both have their advantages and disadvantages. Carburetors are cheaper initially and easier to work on. However, fuel injection will save you on gas money over the long haul. If you had your druthers, what would you choose?