RacingJunk News > Racing > Drag Racing > Class Structure: How Can “Stockers” Be So Quick? 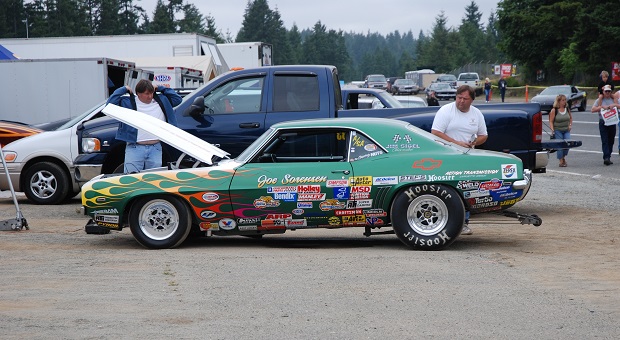 Today’s Stockers haul. From the outside, they can look like the Rubik’s Cube of performance – going fast with “minimal” modifications. Not so. The major factor in this scenario isn’t the parts; it’s the philosophy of going fast. It isn’t so much how you spend or how many trick parts you have, it’s the way you spend your money and how the modifications are made.

When it comes to spending money, you might be surprised to find a Stocker can have some incredibly low-dollar parts mixed with hardware so expensive, you might think it’s better suited to a Pro Stock operation. Selecting the right mix is critical. Because of this, we’re going to share the Stocker hypothesis with you. And we’re absolutely positive dozens of bracket racers can gain plenty by thinking about these very same fundamental principles.

Before we begin, we should point out that there are quick Stockers out there and there are some slugs. Some cars are definitely built better than others, and the better built cars are the ones we’ll concentrate on. When it comes to the quick cars, the biggest secret in construction is to take absolutely nothing for granted. In the case of a Stocker, we most definitely look at each and every piece, then think about how we can make it better (within the letter of the rules).

You also have to remember that in many cases, it’s often easier to spend money on stuff that looks good instead of pieces that make the car go fast. If you really look around, you’ll find some extremely quick Stockers have pretty basic, low-dollar paint jobs and employ other mundane appearance tactics. This is often by design. The racer has intentionally spent resources (and concentrated their efforts) on hardware that provides results, not looks. This isn’t to say a Stocker has to be ugly, but it just makes economic sense to spend as little as possible on a paint job (say a one-color paint job in an easy-to-retouch factory color), and devote more hard earned dollars toward something such as shock absorbers. In the end, what you see might not be what you get. No kidding.

One other big secret is to consume information in small bites. If you look at the entire car (from bumper to bumper), the thoughts of wringing out performance (subtly) can be overwhelming. On the other hand, if you view the car as a package of separate “systems,” all of the information (and modifications) are far easier to swallow. Now, some of these specific “systems” are inter-related, but the relationship will fall into place, even if you take each step at a time. In order, here’s how we break down a Stocker:

Weight and Weight Distribution: Before anything is done to the racecar, you have to think about the overall weight of the car and how the weight will be distributed. In a Stocker, we know going in that the car has a given shipping weight. We also know what the weight of the car will be when completed (to “make class”). As an example, this writer once built a Firebird that had to weigh 3163 pounds, ready to race (driver aboard, fuel in the tank, ballast, etc.) to fit “D/SA” (at the time). That part is easy enough. But there’s a trick here: Build the car as light as humanly (and legally) possible. Then add weight.  Why? Simple: With a lighter car, it’s easier to add ballast. And when you add ballast, you can put it in a spot where it will do the most good.

So where do you take the weight out? In a stocker, fiberglass is out. That means you have to take weight out the old fashioned way: Scraping undercoating. Removing pieces which aren’t mandated by the Rule Book (good examples are air bags, power door locks, horns, turn signals and wipers). Watching the weight of add-on hardware. There’s more, too: Being selective about wiring has its merits. Case-in-point: The stock forward (engine compartment) wiring harness in our car was as thick as your fist. By rewiring the Firebird, our new forward harness is as thick as your index finger. The weight loss is considerable.

Another key is to keep track of the ounces, and the pounds will look after themselves. A good example is the gauge mounting system we came up with. Instead of using an add-on triple gauge bracket, we removed the center air vents from the dash and replaced them with 2-5/8″ Autometer Ultra Lite gauges. In this case, we didn’t have to add the weight of the gauge bracket and at the same time, we removed a few ounces by way of trash canning the air vents. It isn’t much weight, but when the whole car is built this way, it adds up.

Chassis Setup: When we sat down and planned the chassis, we decided to use a minimalist approach. No redundant tubing would be included. Plenty of cars are constructed with far too much pipe – much of which does no good, either, from a performance perspective or a safety viewpoint. The key here is to have a good understanding of what you need, what’s legal and what every piece of the platform does.

Chassis stiffness also plays a role (copy this idea – please!). During the initial construction, the car should be built as stiff as possible. One of the keys was to design a roll cage that really ties the car together via factory bulkheads. Running the rectangular section frame connectors through the floor, then stitching the factory floor pan to the frame connectors also stiffens the car by a large margin. The key here is to pick the location where the frame connector passes through the floor carefully. You want a spot that will provide header clearance, pass through the most amount of factory sheetmetal (this provides the most welding area) and, of course, tie the front and back of the car together. Bottom line with a stiff racecar chassis? You don’t have to worry about the chassis flexing. Only then can you concentrate on properly tuning the suspension. A flexible racecar won’t allow you to come up with any consistent performance figures.

Finally, the choice of materials is critical. While chrome moly steel is more expensive than mild steel, it’s also lighter (by quite a bit). Because of this, a good Stocker will incorporate chrome moly wherever possible in the chassis. As you can see, sound planning can eliminate a bunch of supplementary tubing. This means less cost (even if using high buck chrome moly) and less fabrication (both of which can actually save money). Translate these ideas into your bracket car. You won’t be sorry.

Suspension: Suspension in a Stocker is pretty straightforward, and virtually everything used in a Stocker can be used in a bracket car. Different people have success with different traction devices, but one thing some people forget is what the high-end shock people call “stiction.” “Stiction” is when a suspension member has so much internal friction, it actually sticks in one spot. A good example is a factory front control arm. When the pieces are torqued in place, it takes a good amount of force to physically move the control arm up and down, even without a spring or shock in place. Now, what’s happening here is the suspension bushing material is actually creating spring rate in the suspension. And it’s spring rate you can’t control (with the shock or the actual spring). Because of this, it’s virtually impossible to determine the right spring rate required or to come up with correct valving for the shocks.

What’s the answer? We’ve done a large chunk of testing using different bushing materials (stock, HD stock, urethane, needle bearing), and we’ve come up with two conclusions: Either use Delrin bushings or copy the suspension “bushings” used in old Cup circle track cars. While it was technically illegal in Cup racing, all the fast cars had the front suspension bushings replaced with “disguised” spherical bearings or, in some cases, roller bearings. This is an involved and somewhat expensive process, but it definitely takes the suspension to the next level. By replacing all bushings with real bearings, the suspension can freely move. Certainly, even a high end Teflon-lined spherical bearing has some amount of breakaway torque required to move it, but it’s not even close to bushings (even high tech jobs).  As an example, we’ve found it takes almost 100 pounds of force to move a urethane bushed front suspension control arm through its travel (with most of the preload taken off the suspension mounting hardware). This isn’t simply breakaway torque, either; it’s the constant force the bushing applies to the suspension. And in case you’re wondering, the typical breakaway torque for a large spherical bearing is between 3 and 12 pounds (keep in mind, once the bearing movement “breaks away,” the force necessary to move it diminishes rapidly).

As you can imagine, this change alone can spell the difference between a car that really “works” and one that doesn’t. When it comes to suspension, the real conclusion is to make it work freely. Otherwise, you’ll only fool yourself when it comes to any chassis tuning.

Next up, we’ll finish our look at the chassis with info on Stocker springs and shocks. Then we’ll dig into tires, wheels and other chassis hardware. You might find that those “lowly” Stockers you see at the local drag strip are much more sophisticated than you once thought!

3 Comments on Class Structure: How Can “Stockers” Be So Quick?