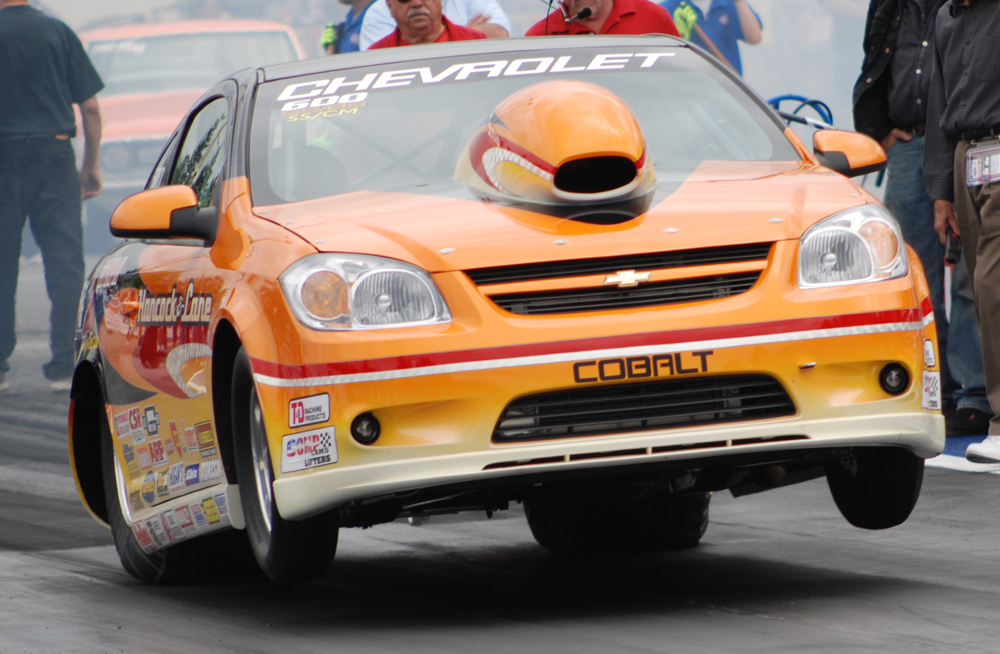 Axles?  What’s the big deal? Once you see a racecar that just pitched a wheel (most often with a chunk of the axle attached), you get a far better understanding of why axles are critical.  It’s also the reason why most race sanctioning bodies have rules that lay out what you can and cannot have when it comes to axles (case in point:  some sort of positive axle retention device, which translates into no c-clips).

But let’s start from the beginning.  Original equipment automotive axles are typically manufactured from 1055 or 1541 steel. Typically, they’re on the borderline between a medium and a high carbon steel with a relatively large manganese content. 1055 has a carbon content between 0.50%-0.60% while 1541 has between 0.36-0.44%. The cabon content allows the shaft to be induction hardened. It’s also easy to work with.  These original equipment axles are induction hardened up to the bearing mount surface (next to the flange — induction hardening is used to selectively harden areas of a part or assembly without affecting the properties of entire component).

With induction hardening, the axle shaft passes through an electromagnetic coil. Eddy currents are generated within the metal, which in turn heats the shaft.  The shaft is then quenched.  This hardening process leaves the shaft with a surface hardness of 55-58 Rockwell, penetrating to a depth of approximately 0.150-.300 inch.  The core of the axle remains relatively soft, but the surface is very hard – almost brittle.   So far so good, but this type of axle, with a soft flange is better suited for folks smacking curbs than it is to handle the shock loads of something like a drag race car.

But curbs and potholes aren’t the biggest concern for a racecar (or even a street-strip machine). Factors for these applications include determining how much of a load will be placed on the axles at launch, the overall weight of the various drivetrain pieces (more on this down the road) and of course the size of your budget.

Calculating the amount of torque applied to an axle is easy:  Take the engine torque output and multiply it by both the transmission first gear and rear end gear ratios.  If it’s an automatic, the multiplication factor from the torque converter should also be added in the mix.  In the sum total, it’s really not that unusual to see figures of more than 10,000 foot lbs. of torque transmitted to the axles.  That’s a bunch.

With these kind of loads there’s more to it than simply the tensile strength of the material. The ductility of the axle shaft itself plays an important role: The torsional load presented to the axle is so large that it must be able to twist and rebound like a torsion bar instead of being too stiff and ultimately snapping.

Rewind a couple of paragraphs.  Recall that induction hardening used on OEM axles?  While it might be great to combat impacts from curbs and potholes, something else is needed for racecar and super high performance pieces.  We turned to Mark Williams Enterprises for information on axle performance and especially ductility:

To achieve the kind of ductility necessary for racing purposes, Mark Williams Enterprises exclusively employs an Austempering process on its Nickel-Chromium-Molybdenum alloy Hi-Torque axles. This heat-treating process involves submerging the axle in a molten solution at over 1500 degrees (F) and then quenching the components in a molten brine solution. This results in a material structure known as Bainite — it proves far superior to the Martinsite structure that comes with the ordinary heat treating and oil-quench process that are commonly employed (that results in a more brittle axle). Other important benefits of Austempering include the axles having higher impact and fatigue strengths, have a resistance to hydrogen embrittlement, and having a more uniform hardness plus increased wear resistance.  In the end, the choice of materials coupled with the Austempering process provides an axle with an ultimate tensile strength of 225,000-253,000 psi along with exceptional ductility (the ability to change shape or form without breaking). The shaft surface hardness is approximately 50 Rockwell, which proves to be far less brittle than an induction-hardened carbon steel axle.

OK.  If all of that is necessary to build good axles, why do you see “Alloy Axles” advertised so cheaply?  The reality is, those components are actually produced by an OEM axle forging company. The main business of that company is to manufacture axles for the heavy truck and construction industries.  And yes, the material used is a carbon steel, common to original equipment axles axles.   In this case, the manufacturer produces an axle blank.  The company selling those inexpensive alloy axles cuts the axle to length and then splines it. These axles are made from the same material as stock axles and receive the same heat treatment. The only real difference is that they are available in shorter lengths and with different splines. Now you know why they’re cheap. And you get what you pay for.

Next week, we’ll talk about splines.