What You Need to Know about Brake Boosters

Many of you may remember the days when power brakes weren’t even an option, let alone a standard feature. Brake boosters use one of two different methods to enhance the amount of braking pressure exerted by your foot on the pedal. However, technically speaking, systems using only one of these methods are correctly known as “power brakes.” The other method used is properly called “power-assisted brakes.” Here, we’ll review the two types of systems and how they work, looking a little at some diagnostic and troubleshooting methods for the type of power brakes used in the vast majority of passenger cars and light trucks.

The Difference between Power Assist and Power Brakes

There aren’t many people out there that really know this difference. To them, any system that multiplies the power you input the brake pedal to slow and stop the car is a power braking system. In the simplest of terms they are correct. However, we use the two different terms to tell the difference between the two types of assist systems-hydraulic pressure and vacuum.

Systems using hydraulic pressure to assist driver braking input are no longer used on new production passenger vehicles although they are still used on some larger commercial vehicles. These systems have a booster mounted to the bulkhead in front of the driver. Attached to this booster is a pressure line attached to the power steering pump. When the driver steps on the brake, fluid is allowed to enter the booster behind a diaphragm. The fluid pressure presses against the diaphragm and multiples the driver’s braking input. This system is also known as a hydratech braking system. Just to qualify what I said above: I’ve been involved with the automotive industry in the US for about 40 years now and have only personally seen this type of system installed on large commercial vehicles and much older passenger vehicles. This isn’t to say that there isn’t someone out there still using it.

The type of brake system that we have today is a true power brake system. There is the booster against the bulkhead. Attached to the booster is a vacuum line going to the intake manifold and supplying manifold vacuum (Manifold vacuum is highest when decelerating). Vacuum is constantly supplied to the master cylinder side of the diaphragm. When the driver steps on the brake pedal a valve behind the diaphragm opens. This applies atmospheric pressure to the diaphragm. This outside air pressure multiplies the driver’s brake input.

All of these problems, except the leaking air pressure inlet valve will result in you having to apply more pressure to the pedal than normal. A leaking air pressure inlet valve will cause your car to feel like the brakes are dragging-because they are. You may even have people telling you that your brake lights are constantly on if the leak is big enough as it will draw the brake pedal down and activate the brake light switch on the pedal. That inlet valve is non-replaceable. The booster has to be swapped out. 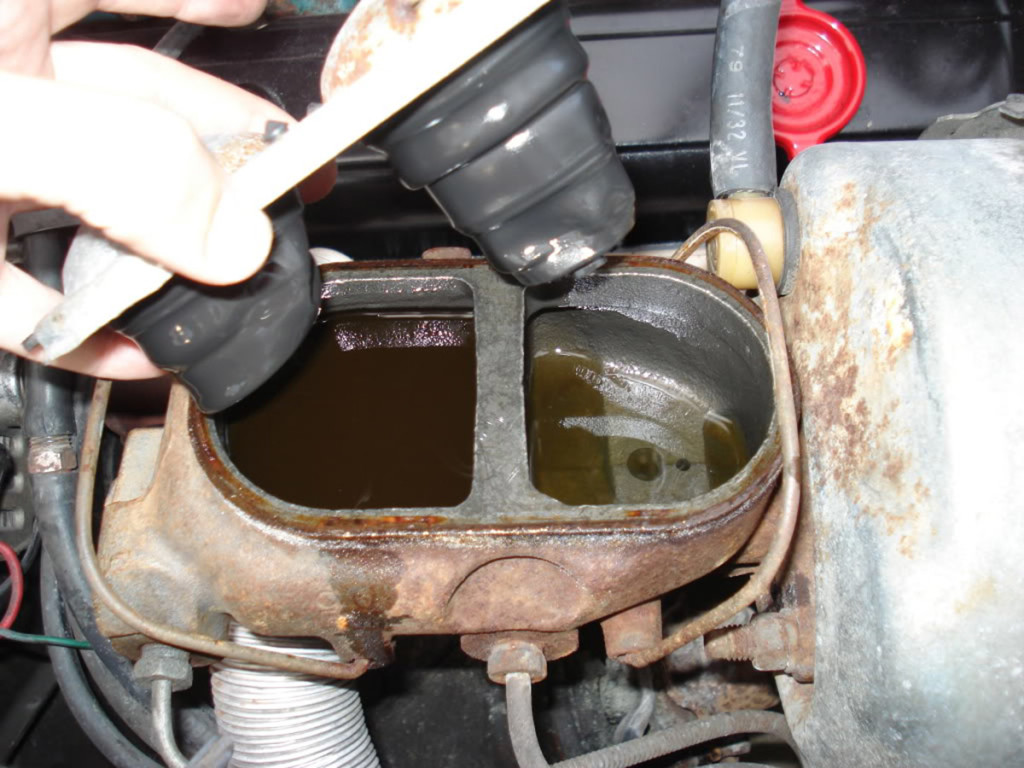 Diagnosing the Cause of a Loss of Braking Power

You’re driving down the road and need to stop, quickly. You apply the brakes, but it almost feels as though nothing is happening, although the pedal feels normal. You press harder and the car begins to stop. If the brake pedal doesn’t sink to the floor, most likely you’ve got a vacuum leak that needs to be fixed. Pop the hood and look at the junction between the master cylinder and the booster. Wetness right here is an obvious sign that the booster’s front seal is leaking and that it has caused the master’s rear seal to leak. Both will need to be replaced, which I will describe below.

Ok, so how do you determine where the problem is if there is no wetness present? Grab a mechanic’s stethoscope or just a piece of tubing about ½ inch in diameter and about 18 inches or so long. Start the engine. Put the stethoscope on and slowly move the end of it around the master cylinder, booster, and vacuum line. Listen for a hissing sound. Turn off any other source of noise that you can to make the hissing easier to hear. If you’re using a piece of tubing, stick one end in your ear and slowly move the other end around the components. If you don’t hear any hissing, loosen to two nuts securing the master to the booster (5/8 inch wrench or socket required) a little. Still don’t hear any hissing? Have someone slowly and carefully depress the brake pedal. Ahh! There it is! Replace the booster to fix.

Manipulate the hose leading to the intake manifold with the engine running. If you see any cracks or tears, replace the hose. If you hear any hissing, localize it. Is it the hose or the fitting leading into the booster? Replace the problem part. The valve/fitting just pulls out with a little effort and pops back in with the same amount of effort. You may have to twist and turn the hose to get it off, especially if they’re old as heat will have begun to melt the rubber to the plastic.

If you can hear but not localize the hissing, carb cleaner will help you locate the leak. Carb cleaner has volatile hydrocarbons that your engine really likes in small quantities. Use the included hose to direct the stream around the various possible points of leakage with the engine running. Go fairly slowly as the chemicals have to get into the combustion chamber to make a difference. When you spray over the area that’s leaking, you’ll hear and feel the engine speed up a bit and then settle back down.

You’ve gone through the steps above to diagnose that hard brake pedal but have found no leaks in the vacuum portions, so what now? Verify that the master cylinder has fluid and that the pedal doesn’t sink to the floor with moderate/normal braking pressure. This eliminates leaks in the fluid side, but doesn’t eliminate the fluid side as the culprit.

Pop the master cylinder open and look at the fluid. New brake fluid is clear, usually with a slight yellowish tinge to it. Old, contaminated fluid is dark brown. Using a flat blade screwdriver, lightly scrape along the inside bottom of the reservoir and pull the screwdriver out. It should come out clean, with just a few drops of fluid on it. (Don’t let those drops hit the paint!) However, if your car is an older one, chances are it will have a layer of sludge on the bottom of the blade. A little bit of sludge is to be expected. However, if most of the screwdriver blade is coated with it, you need to flush the system. Sludge can get into the small orifices throughout the system and crud the system up, causing it to lose efficiency, and, if not fixed, can lead to those orifices becoming completed clogged and a loss of brakes.

Flushing the system isn’t as hard as it sounds, it can just be a little time-consuming, especially if you have to do it alone. Before starting anything, grab the things you’ll need: a good-sized bottle of the correct DOT-rating brake fluid (Check your owner’s manual or the tag that may be inside your glovebox. Most pre-2000 cars use DOT 3 fluid.), a bottle of DENATURED alcohol (regular alcohol will eat the rubber components and cause leaks), and a 3/8 inch wrench. It’s also a good idea to get a couple of drain pans. Follow these steps:

Unless you’ve got a one man bleeder kit, you’re going to need a helper now. Promise them a beer or two for their time. What we’re doing here is using a little of the braking pressure the system develops to help clean the system out. Refill the master with alcohol and go back to the rear. If you’ve got a one man bleeder, attach it to the bleeder screw on the right rear and loosen the screw a little. Pump the brake pedal three to five times. Close the bleeder and move to left rear, right front, and finally left front and repeat until each bleeder pushes out clean fluid. Suction out the alcohol and refill the master with brake fluid. Now it’s time to bleed the brakes.

This is best done with two people if you don’t have an expensive pressure bleeder. You can use the one man bleeder, but it’s not easy to know when you’ve gotten any and all air bubbles out of the system. With the one man bleeder, make sure there is enough fluid in the bottle to cover the hose, attach the bleeder to the right rear (LR, RF, then LF). Loosen the bleeder and pump the pedal four to five times. Close the bleeder and move to the next wheel until all four are done.

If you’ve got a helper, when you move to anew wheel, attach the bleeder bottle to the bleeder valve and have your helper pump the pedal five times and hold it as though they’re sitting at a light. Pop the bleeder open and watch for bubbles. Your helper needs to inform you when the pedal hits the floor (but they shouldn’t be trying to force the pedal to the floor.) They are not to release the pedal until you close the bleeder valve and tell them to. Otherwise air will enter the system and defeat the purpose. Repeat this until all the air has been removed from the system and the fluid runs clear.

Replacing the power brake booster is a really straightforward process shouldn’t take any more than an hour. It’s only six bolts/nuts, two in the engine bay and four under the dash in the passenger compartment. Loosen and remove the two nuts securing the master cylinder to the brake booster. Carefully slide the master towards the front of the car until the studs are fully disengaged from the master. Don’t kink the brake lines.

Worm your way up under the dash. No, it won’t be at all comfortable. Loosen and remove the four nuts securing the brake booster to the bulkhead. Disconnect the booster input rod from the brake pedal. This could be a simple clip, cotter pin, or a nut and bolt, depending on year, make, and model of car you’ve got. Push the booster from the back to loosen it. From the engine compartment side, pull the booster out. Installing the new booster is a simple matter of reversing the above steps.