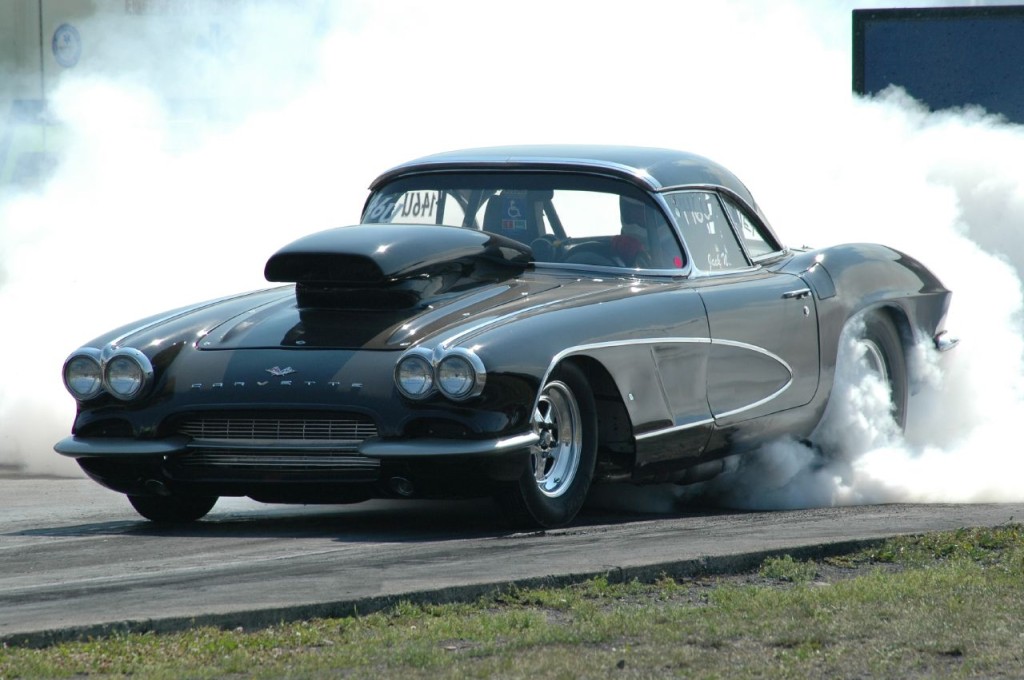 This final installment of tuning for the drag strip is going to deal with getting more fuel to the engine now that we have more air going and the ignition installed (see Tuning Tips: Letting the Engine Breathe and Tuning Tips: Let’s Get Sparky.) The more air and fuel that we can get into the engine, the more power our engine can produce. So, let’s see what we can do to increase the amount of fuel being fed to it.

Carburetor specifications are based upon the amount of air that the carburetor can flow, and are measured in cubic feet per minute of air, or CFM. The higher the number, the better. A typical stock carburetor will flow in the area of 500 to 600 CFM. That’s enough to make a fairly powerful four cylinder engine, but is only enough to create a docile kitten of a V8. To get us to our dream of sub-ten second passes, we’re going to need to double that.

Being old school, my favorite is Holley. I’ve just had great results with them over the years, but my friends and competitors have also had good results from Edelbrock and others. The choice is yours. Two things to remember, to make max power, you want a minimum of 1050CFM, like the Gen 3 Ultra Dominator.

Now, Get with the Jet Set

This is why performance carburetors are equipped with parts known as jets that can be changed. The jet is the internal carburetor component that does most of the metering of the fuel. This means that if we install larger than stock jets, we can flow more air and fuel and make more power.

The exact procedure for changing jets varies by make and model of carburetor, but it’s a pretty straightforward removal and replacement. The process shouldn’t take much more than five to ten minutes for each (There’s two.). With Holley carbs, you have to remove the front float bowl to replace the jets.

For this part, I could get all technical with you and tell you to install an oxygen sensor in both banks of the exhaust so we can get the idle mixture just right. However, when we’re tuning to go fast, “just right” isn’t what we’re looking for. We’re actually looking for “a little too much.” 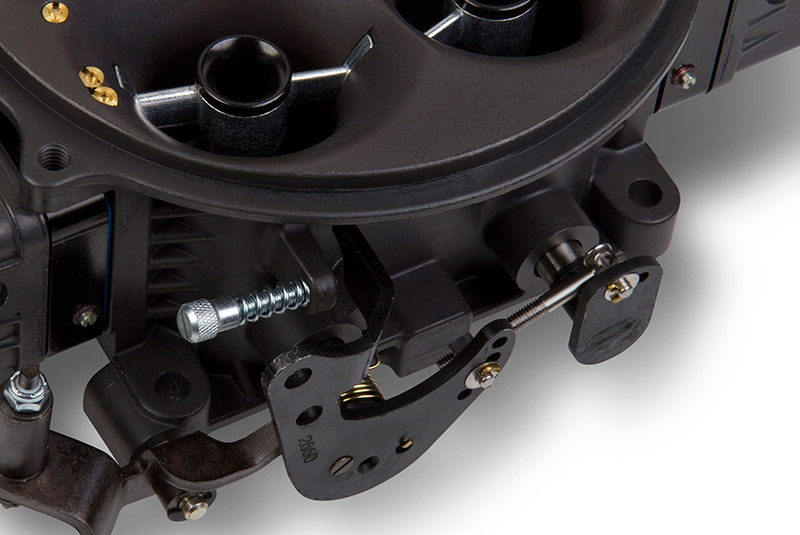 Take a look at the image above. In it you will see four different points of adjustment on the carburetor. From the front they are the accelerator pump adjustment, the front idle mixture adjustment screw, the idle speed adjuster, and the rear mixture adjuster. Let’s focus on the idle speed first. Hook up a tachometer first, we need to be able to get within about 50 RPM of our target and that’s pretty hard to do by ear.

We can adjust the accelerator pump (the linkage arm leading to the front of the carburetor.) to give us a bigger squirt of fuel when we launch. You want to lengthen the screw pressing down on the lever that actuates the accelerator pump so that it pushes the pump diaphragm farther and faster. Which way to turn the screw and not will vary, so you’ll have to eyeball it.

Now that we’ve probably come close to doubling the amount of fuel that our carburetor can flow, we need to make sure that the supply can keep up with the demand. This means we need to either replace the stock fuel pump, or insert a pump between the tank and the primary pump, unless our primary pump is already in the tank, in which case, the secondary will go after the main pump. I’m going to go on the presumption that you’ve got a stock cam-operated pump attached to the side of the block. 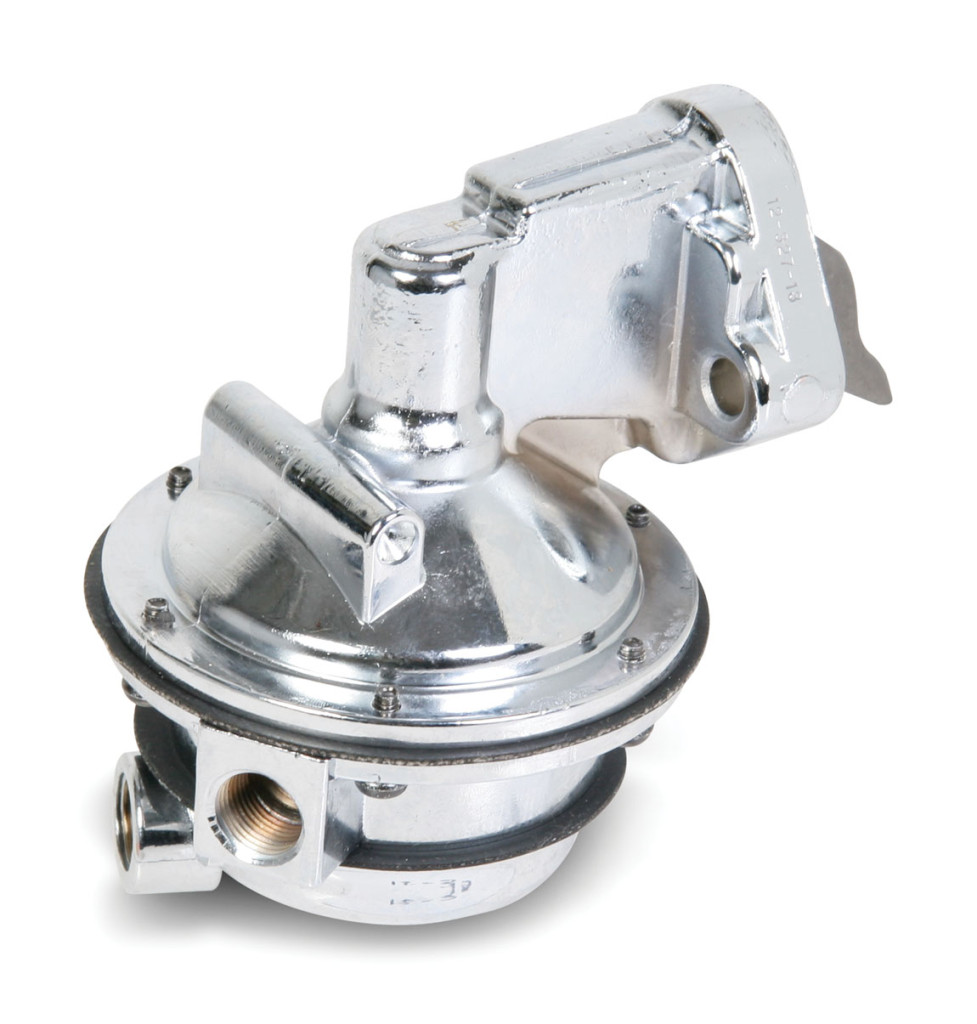 Here again, for me, Holley is an old friend. The image above is of a Holley chromed aftermarket performance mechanical fuel pump that is capable of delivering more than 130 gallons of gas an hour to the carburetor. This pump will be perfect for most amateur class drag applications. If you’re looking for a pump that will flow enough for a blown engine, go for the 170 GPH+ version. The image below is of a Holley electric fuel pump for the strip and street that flows more than 110 gallons per hour. 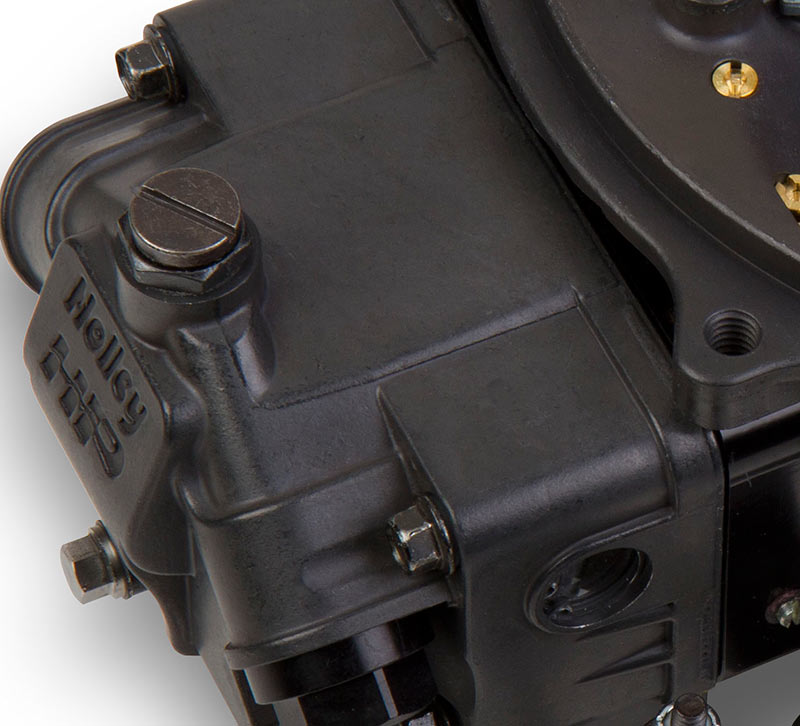 We’re almost done. The final step is to make sure that the new fuel pump doesn’t cause the carburetor to overflow and start a fire under the hood.  Take a look at the picture above. You’ll notice a screw/bolt with a flathead screwdriver top with a nut under it. That’s the float bowl adjuster. It controls the fuel level inside the float bowl/chamber. You’ll also notice a round opening in the side. That’s the chamber sight glass that lets you visualize the fuel level.

With the engine running, loosen the float adjuster screw and let the float bowl fill up. Tighten the adjuster and watch the fuel level through the sight glass. On some carbs, this is actually a plug that needs to be removed. Ideally, the level will hover just at the bottom of the glass, but low enough that you can see the top of the fuel. With a sight plug, you want to adjust the float bowl to where fuel just dribbles out of the sight hole. Once you have that balance reached, tighten the lock nut. Perform the adjustment on the rear bowl and you’re ready to go.