Roush Yates Engines’ FR9 has been taking Ford drivers across the line with admirable speed and reliability all year long. This isn’t a fluke – the developments leading up to the creation of this engine began before many of those drivers were born.

The tale begins with Doug Yates, current president and CEO of Roush Yates Engines. He’s the son of Robert Yates, one of the best engine builders in the USA. Robert can claim an astounding 77 race wins as an engine builder, while as a team owner, he can claim another 57. This year, he was invited to join the 2018 class at the NASCAR Hall of Fame.

Robert’s experience granted Doug a perfect environment in which to grow up with maximum exposure to engine building.

In 1984, Robert opened his own engine shop, and Doug began working there with him. 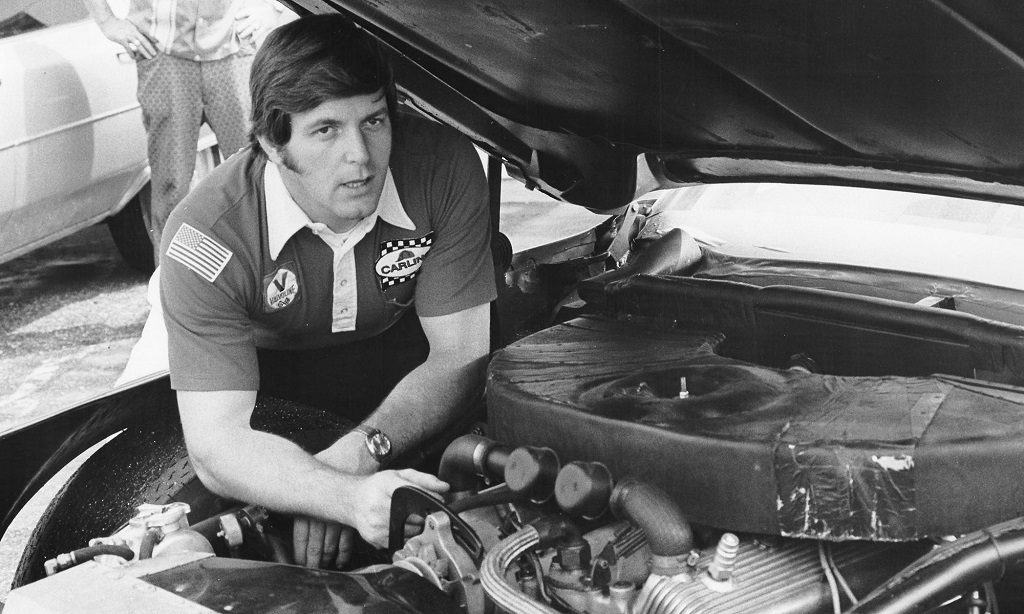 He realized that working in racing was anything but an easy career path. Motivated to explore other opportunities, he decided to pursue a formal education at North Carolina State University, where he proudly gained a degree in mechanical engineering. After graduation, he took his new knowledge back home, hoping to work alongside his dad to create a truly world-class engine shop.

Another major figure in the development of the FR9 is Jack Roush. Few have had such a profound effect on NASCAR than Roush, who is affectionately known as “The Cat in the Hat.” The winningest owner in the history of NASCAR, his teams have won more than 300 victories in NASCAR series since 1988.

Despite fierce competition between Roush and Robert Yates, they teamed up in 2003, and this alliance set the stage for the development of the FR9. Less than three months after deciding to work together, in the first Cup Series race for the new team, two Roush Yates Engines-powered cars, driven by Greg Biffle and Elliott Sadler, stood next to one another in the front row of the Daytona 500. 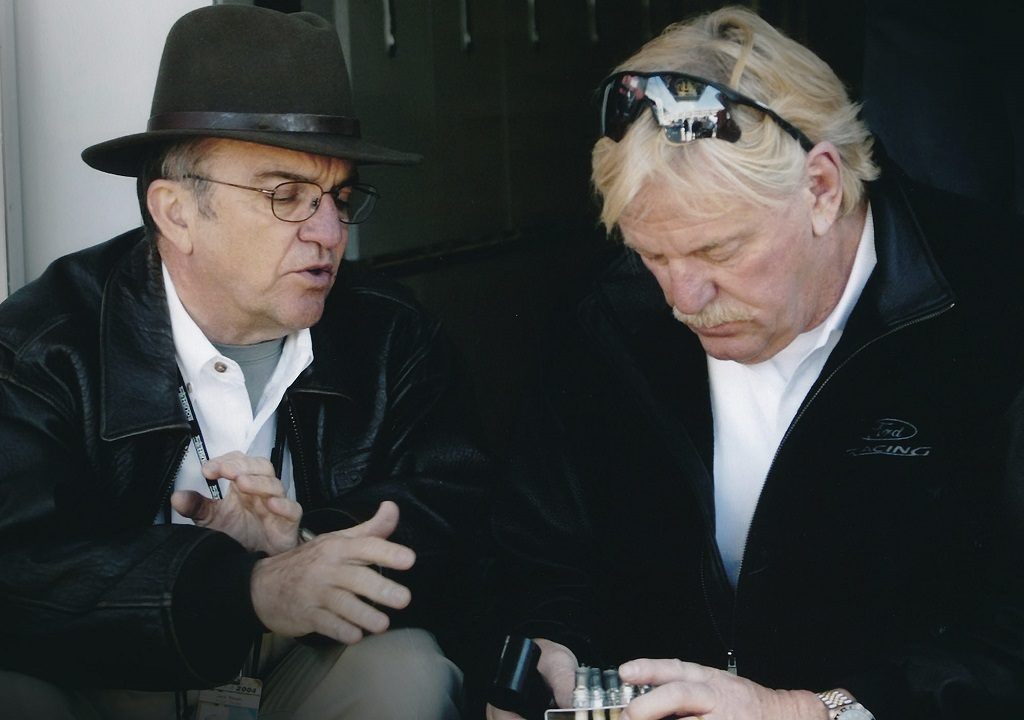 “To win the pole at the Daytona 500 is hard to do,” Doug said. “But getting two cars in the front row, first and second, is incredibly hard. That was one of my proudest moments in racing.”

And now for the other characters in the story of the FR9: Design & Analysis Manager Dan Keenan, Ford Performance Motorsports Powertrain Supervisor Dave Simon,  Chief Operation Officer Mary Ann Mauldwin and the rest of the team at Roush Yates engines. Keenan earned his degree in mechanical engineering from Montana State University, and put his skills to work with dynamometers. In 2000, he joined the Robert Yates Racing team, and in 2007 Doug asked him to work with Ford Performance on the development of Ford’s first purpose-built, all-original NASCAR race engine – the Ford FR9.

“We had been racing what was called the R452,” Keenan said, “which was the original block and architecture that Ford had done back in the 1960s. That’s what Robert did, that’s what Doug did, that’s what Jack did. They all worked on that.”

The R452 had a very good track record. One of its first stand-out innovations was something commonly known as the “Yates head.” Officially called the C3, it was responsible for a massive leap in power of over 50 hp – so much that NASCAR actually considered outlawing it. Fortunately, officials allowed the Yates Head in on the condition that it was made available to other teams as well, which Robert happily agreed to.

But more than 30 years had passed since Ford last put out a new engine, and with both Chevrolet and Toyota introducing new motors, the folks at Ford knew it was time to get back to the design table. Keenan and Dave Simon took the initiative with the project.

“The first thing I did was, I went around the shop and essentially interviewed all of our guys,” Keenan said. “I went to our builders and said, ‘What don’t you like about the current engine?’ I interviewed our cylinder head guys. And I asked every group what they liked and didn’t like, and unmasked the good, bad, and ugly of our current engines. So we had design goals for the new engines.” 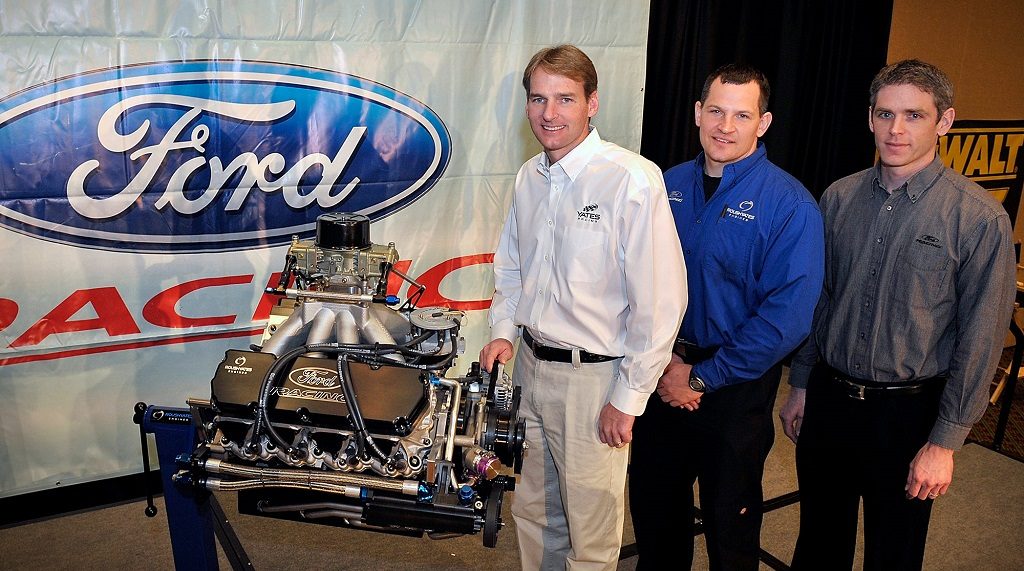 As all this was going on, racing was of course still taking place, and the drivers needed new engines each week. It was 2008, and the R452 was still performing well; Carl Edwards, in the #99 Ford for Roush Fenway, finished the Cup season with a series high of nine race wins. As this was the R452’s final year, it couldn’t have had a more fitting send-off.

Designing and building the FR9 wasn’t a single-company effort, of course. Roush Yates depended on partners to aid in beating challenges and improving the engine. For example, long-time partner Cometic Gasket worked closely with the development team to create a new head gasket system.

Once an engine is built to the point where it can run, the next step is rigorous and sophisticated testing. While there’s no substitute for on-track testing, computer simulations can save a lot of time and effort by narrowing down which components will be necessary at the track. Old-school racers have been slow to embrace the usefulness of computers here, but Doug Yates recognized how much simulations could contribute to the testing process.

Before computerization, testing was largely a matter of trial and error. It was both possible and common to see that certain adjustments produced improvement without understanding why this was so, which meant a huge number of failed attempts were required to find even a single working solution. Simulations allow one to eliminate bad options long before they appear on the track, saving time and resources. Simon credited Doug Yates’ leadership and vision with taking the company in the right direction with use of simulations.

In 2004, the FR9 took home its first official points win at Pocono under the hand of Greg Biffle, who took the checkered flag for Roush Fenway Racing. Then, in 2011, Ford cars claimed the top three spots in the Daytona 500. 20-year-old rookie Trevor Bayne cruised into first for Wood Brothers Racing, Carl Edwards of Roush Fenway Racing took second and David Gilliland of Front Row Motorsports took the third place spot.

So, what is it that makes the FR9 a favorite of drivers from all different teams?

“It’s hard to have great reliability and great power, and I feel like we have both with this,” explained Blaney, a driver for Wood Brothers Racing, #21. “And that’s something that’s pretty great about this engine. That makes you feel good as a driver, knowing that you have that behind you.”

In order to achieve that remarkable combination, development and design would have to be supported by top-quality manufacturing. Mary Ann Mauldwin was the woman Roush Yates Engines needed to provide just this. In contrast to Doug Yates, she hadn’t started out immersed in the world of racing.

“People around here talk about having a love for cars,” she explained. “My love is for manufacturing.”

Her involvement with the FR9 project began in 2004. 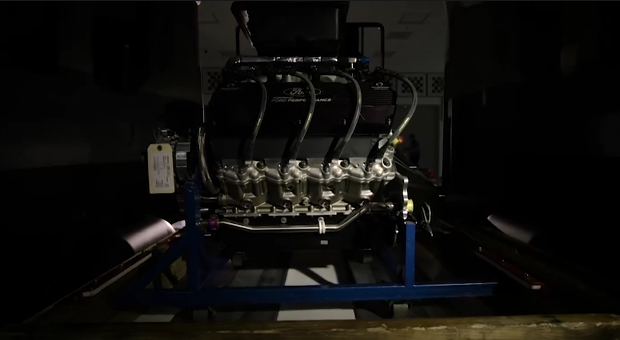 “I got a call one day,” she said. “This person said, ‘I have a friend who works for a company in North Carolina, and they’re looking for some help with their materials management and wondered if you might be able to help us find someone.’”

As it happened, the “friend” was Doug Yates. He and Mauldwin hit it off, and she took the job. In 2016, she and her team put a new ERP (Enterprise Resource Planning) software system from RKL eSolutions, one of Roush Yates Engines’ newest partners, in place, in the interests of ensuring consistency.

“When I started, I found that our inventory accuracy was just 42 percent,” she said. “Which meant that about 60 percent of the time nobody really knew what parts we had. And so everybody kept parts in their desk because nobody had confidence in our system.”

By the time Mauldwin had been with the company for only one year, an independent audit found nearly 100 percent inventory accuracy – in record time. A similar story comes from Rottler Manufacturing, another key partner.

It’s a tired saying that the people who make the difference, but for Roush Yates Engines, it’s true. From the racers to every employee in every department, everyone has the same goal – to be the best at what they do. With a group like this, there’s little doubt that the FR9 (alongside other Ford engines, like the impressive Ford EcoBoost V6) has more wins in its future.

At the moment, hopes are high that some of those wins will come from the premier Monster Energy NASCAR Cup Series. Five Ford drivers from different teams, with seven wins between them, are heading into the playoffs. Each one will rely on an FR9 to power them to victory.

“Winning the championship this season is going to take a concerted team effort from all aspects of our program,” says Brad Keselowski, driver of the #2 Team Penske Ford Fusion. “We’ve had a good season so far, no doubt, with multiple wins and a top-five spot in the point standing. Anything can happen in the playoffs.”