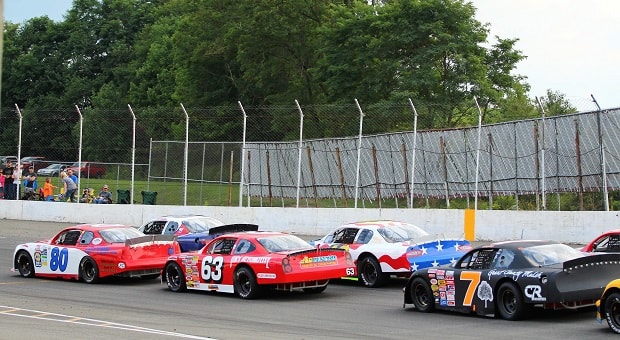 This year’s iteration of the Super Cup Stock Car Series season will be unlike any in the past.

16 races distributed over eight dates, six tracks and five states will determine the champion and the recipients of multiple during the 11th year of the series, which features 3,300 pound and 600 horsepower full-bodied stock cars.

“2018 is shaping up to be a banner year for our series,” Director of Competition Joe Schmaling remarked.  “Once again, our drivers will be showcased in front of a national audience, with several new teams expected for this season.”

Drivers will start earlier than they have in recent years on Saturday, April 28.  Following a special event demonstrating the “Racin’ The Way It Used To Be” brand, the SCSCS will make its first appearance for points at the Dominion Raceway and Entertainment Complex in Thornburg, Virginia.

During the September 2017 event, veteran Bob Schacht captured his first victory in the series, and he will once again be a threat along with the rest of the competitors in what’s anticipated to be a full field arriving at the 4/10-mile oval to kick off 2018.

Next comes a familiar facility, participating for an eighth season straight on the first Saturday of June.  One year ago, Ohio’s Midvale Speedway bore witness to two first-time winners, Trent Gossar and Stephen Cox, on their 3/10-mile bullring.

After two attempts cancelled due to weather a year back, the SCSCS will return to the 3/8-mile Kingsport Speedway “Concrete Jungle” in Tennessee for a Friday show, the precursor to a busy summer for competitors.

The annual early July date at Jennerstown Speedway Complex is back on the schedule, the first of a record three visits to the 1/2-mile nestled within the Laurel Highlands of Western Pennsylvania.  Brent Nelson swept both 50-lap features of the event one year previous.

Two weeks the series returns to one of its favorite facilities, recently given a new name.  The UMI Motorsports Park in Clearfield, Pennsylvania, purchased over the off-season by UMI Performance, will partner with the Rusty Wallace Racing Experience to host the SCSCS for their first racing event under new ownership.

A similar return to a popular track under new management will take place in the high heat of summer.  On Saturday, August 11 the SCSCS will travel to the Mountaineer State’s only asphalt track, Ona Speedway.  This will mark the first appearance for the series since 2013, when defending champion Jim Crabtree Jr. picked up the win in a thrilling side-by-side finish with Kevin Kromer.

The series’ home stretch will take place back in the Keystone State.  Jennerstown Speedway not only will hold their annual late August date – champions will be named a few weeks later during their own championship night for their local divisions on Saturday, September 15.

“It was only fitting to have the championship weekend include Super Cup after the successful revitalization we’ve shared together,” Bill Hribar, General Manager of Jennerstown Speedway Complex, said.  “We wanted them to be part of the celebration.”

A ninth date has also been secured, as Dominion Raceway will once more feature a post-season special event on Saturday, September 29, similar to 2017. Details will be announced at a later date.

2018 will again feature the Twin 50 race format, meaning all of the eight regular season stops will offer two attempts for drivers to go for the win and gain points.

The finish of the first September Jennerstown race will crown both the North and South titlists, with all sights set on the overall Super Cup Stock Car Series championship in the second and final event.

Drivers must compete in the entire schedule to be eligible for the overall championship, with points awarded regardless of division designation, as in 2017.  One change made for this year is that drivers can elect to swap out one race outside of their designated division for another when going for the North or South title, allowing flexibility if they can’t make the trip to a particular event.

National television coverage of 2018 races will be featured for the third season in a row on MAVTV thanks to Sopwith Motorsports Productions and various supporters.  At least the partial schedule is slated to be filmed, with additional sponsorship opportunities still available for the remaining races to be showcased.  Interested parties are encouraged to contact SCSCS Director of Competition Joe Schmaling at [email protected] as soon as possible.

More information regarding each event will be available as the start of the new season approaches at www.supercupstockcarseries.com. 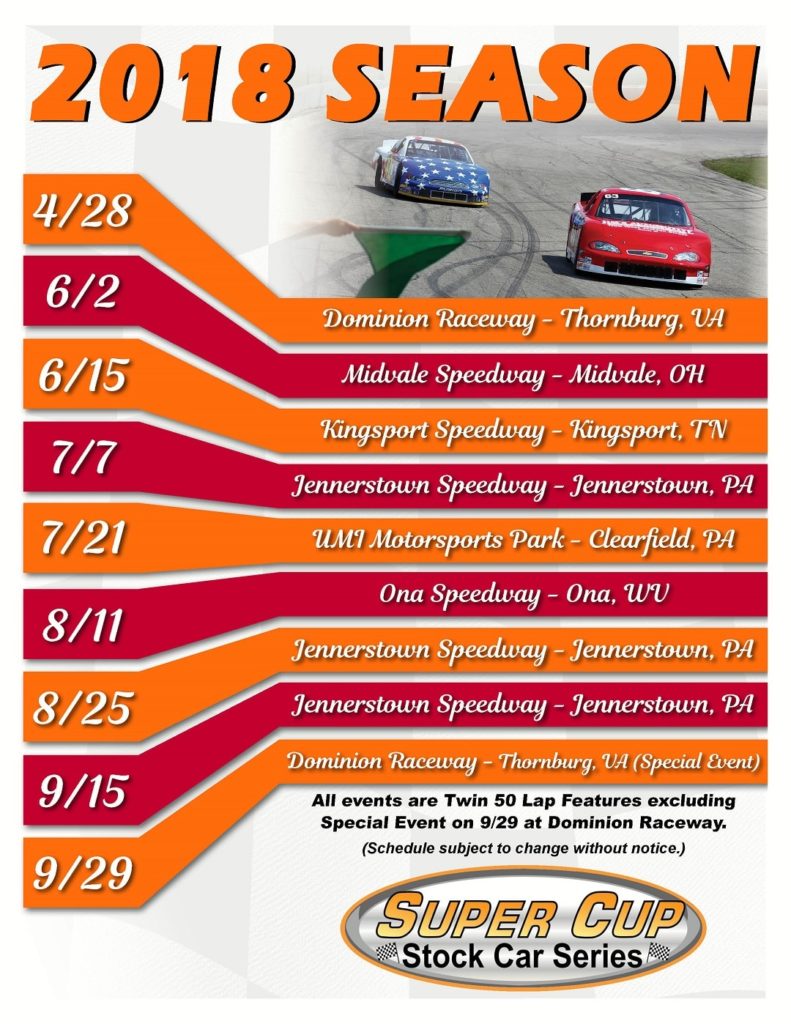