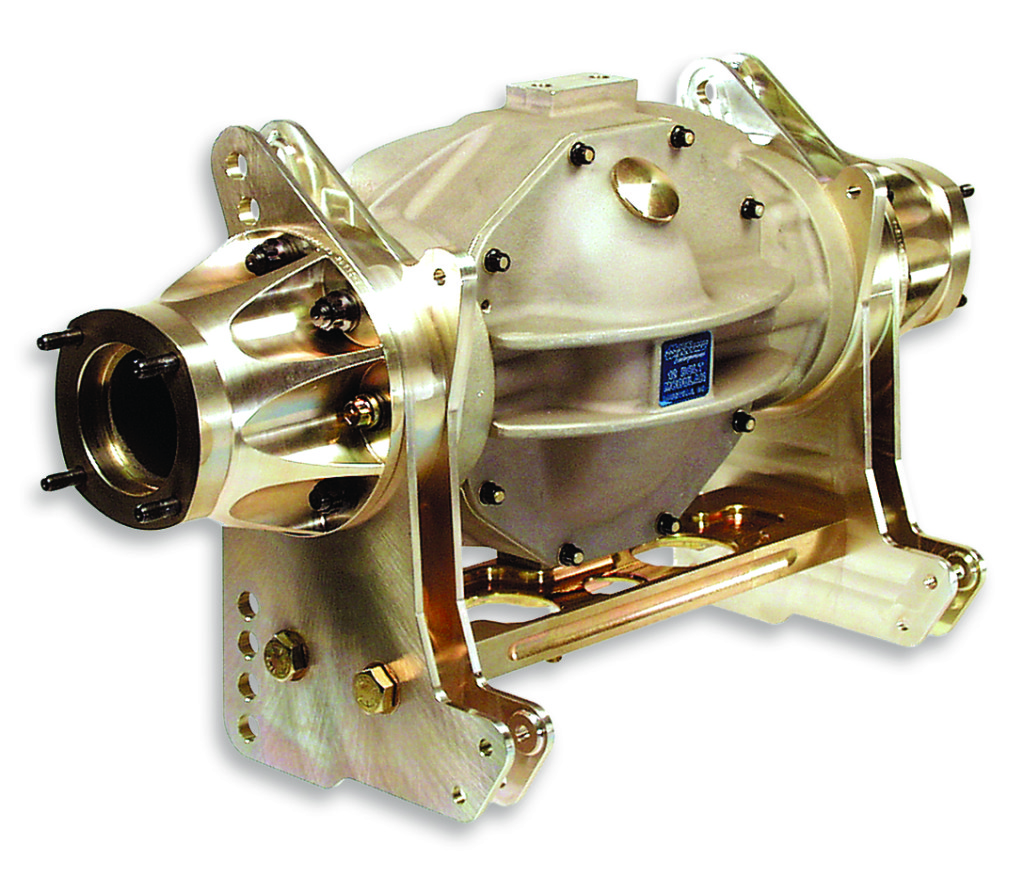 Ford 9-inch  rear axles are the darlings of drag racing (and other forms of racing too).  They’ve been used in everything from the lowest class Stockers all the way up to Top Fuel dragsters.  Unfortunately, in stock form, the Ford 9-inch housing isn’t as strong as its reputation.  Racers were (and still are) plagued with rear axle housings that bend.  Sure the race teams and chassis builders fortify the housings with countless braces, supports and brackets, but the massive torque loads still manage to turn even the stoutest pieces into metal spaghetti.  In some instances, the axle housings bend and remain bent.  In other more mysterious cases, the housings bend during the initial drag strip launch and then snap back into form as the run is completed. The reaction is very much like a huge, transverse torsion bar.

Making matters worse is this:  Today, horsepower is cheap.  What was once exclusive Pro Stock level power is now normal performance.  There are plenty of cars out there making huge power; and those big cars can turn a stock or poorly braced Ford housing into junk in a heartbeat.

Pitfalls Of The Ford

The Ford has some inherent issues.  For example, the newest junkyard part you’ll come across has to be twenty-five years old.  Yes you can buy “new” housings but they’re not perfect either.  There are three major drawbacks to the stock 9-inch from the drag racing perspective:  First, the housing axle tubes are not round.  Not only do they taper from 3-1/2-inches down to 3-inches, the tubes all have “flats” which are more or less squashed onto the tubes.  Both of these factors force a chassis builder to custom build every bracket, because they aren’t symmetrical.  Finally, the OEM Ford housing face is approximately 24-inches wide.  Because of this, you have to weld brackets to the face in some cars.  This means you lose adjustment holes for items such as the 4-link.

Another problem that’s seldom discussed with Ford 9-inch housings is the rear brace.  The almost standard brace does nothing to stop downward bending on the rather flimsy Ford housing.  A second brace is usually needed to eliminate downward flex.  Another point to consider is the actual rear “cover” in the housing.  The back plate isn’t one piece (even though, at first glance it looks like a one piece affair), it’s usually pressed into the housing.  The chassis builder is forced to weld the rear cover to the housing, but that doesn’t stop another problem:  The hypoid action of the third member still tries to force the rear end carrier out the back of the housing.  In order to stop this, many chassis builders weld a series of small tubes radially between the face of the housing and the rear cover plate.  Most often called a “cage”, this apparatus stops the center portion of the housing from flexing fore and aft.

So far so good. If you’ve been following along and you’re using a stock Ford housing, you’ve already spent good dollars on the build.  At a certain point (lets say you’ve back braced it, caged the center section, added a bottom brace and straightened it, you’re already into fabricated housing territory (at least from a cost point of view).  And you’re using stock old Ford parts.

With all of the cutting and pasting, the chassis builder usually begins with only the skeletal remains of the stock Ford housing, then starts from scratch.  As you can imagine, this isn’t a very cost or time efficient way to build a rear axle housing. There has to be something better.  And there is.  Instead of using marginal factory components, some housings are now built entirely from scratch.  One of the first to fabricate an all-new housing was George Cathey of Pro Designs.  Cathey’s new, completely fabricated sheet metal housings didn’t rely upon marginal junkyard parts for the foundation.  They didn’t bend.  They were brutally strong and very resistant to extreme torque loads.  And just as important, they were lighter than the heavily braced Ford 9-inch housings that were standard equipment under the quickest cars.  Racers being racers, the advantages became immediately clear.  Soon the housings were seen under Pro Stock cars.  With the decidedly different shape of the housing, the drag race media quickly came up with the term “Star Wars housings”.  While Cathey has moved on to other projects and doesn’t build housings on a regular basis, his original housings have forged a path for several new, completely fabricated housing designs.

Are these new fabricated housings restricted to Pro Stock or tube frame cars only?  Absolutely not.  There are plenty of applications, including any number of Fast Street cars, class legal cars, Super category and ET cars that can make use of similar housings.  Given the “trickle down effect” of drag racing, several manufacturers recognized the fact that many of these racecars had plenty of heat under the hood too.  And much like their professional drag race counterparts, they too were twisting, bending and otherwise mangling rear end housings.  As a result, there are countless applications that can make use of a contemporary sheet metal axle housing.

Does the chassis configuration restrict the use of sheet metal housings?  Some of the most difficult applications are those with triangulated four links. The reason is the upper links typically intrude into the narrow face of the housing.  Companies such as TRZ Motorsports (builder of the trick housing spread out in the pages in front of you) can build a sheet metal housing for almost any Fox Mustang, GM A Body or GM G body application. These are all similar triangulated four link applications, and they can be fabricated to fit almost any width required.   The truth is, you don’t have to have a full tube frame Pro Stock chassis to enjoy the benefits of the fabricated housing.

The TRZ housings are engineered as direct replacements and maintain original dimensions and suspension mounting points. Where they differ is in the type of link used.  Stock setups use a bulky rubber bushing upstairs for the top link.  TRZ revises the mounting arrangement to accept a common rod end. We’ll dig deeper into the layout along with various options in the next part of this series.