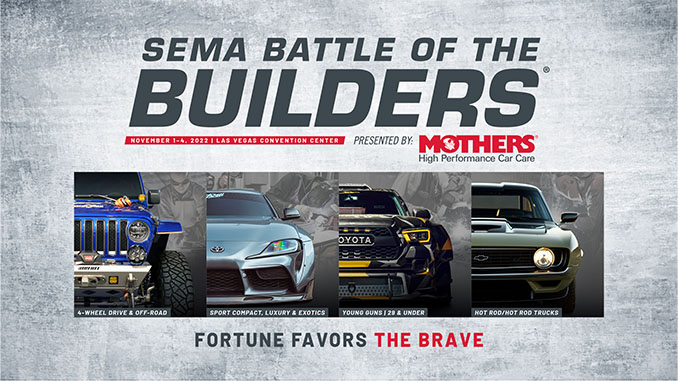 During SEMA Industry Awards Banquet on Thursday night, SEMA Chairman James Lawrence and SEMA President and CEO Mike Spagnola announced a five-year plan to expand the SEMA Show into an “all-city” experience. Officially called SEMA Week, the expansion will create the most passionate and exciting automotive event in the world, and it will kick off in 2023 with new concepts, activities, and events

Key industry awards were presented during the SEMA Industry Awards Banquet on Thursday, Nov. 3. The winners are:

The great minds at SEMA are never stagnant and are always trying to think up new ways to innovate. SEMA have announced a five-year vision to expand the SEMA Show into an “all-city” experience. Officially called SEMA Week, the expansion’s goal is to create the the most exciting experience for the most passionate SEMA fans. SEMA Week will kick off in 2023 with all-new concepts, activities, and events introduced over the five-year roll-out period. Another cool thing that SEMA Week will have is a SEMA Auction, featuring some of the best builds from SEMA and many more amazing vehicles to headline the festivities. Which will surely bring some fireworks!

SEMA Week will of course be headlined by the SEMA Show that we all know and love, which will continue to remain a trade-only event Monday through Friday. On Friday, the final day of the SEMA Show, a limited number of enthusiasts will be able to attend the SEMA Show through the Friday Experience program, which launched at the 2021 SEMA Show. Beginning on Friday evening of SEMA Week, SEMA will take over the Las Vegas Festival Grounds through Saturday night with an all-new SEMA Fest.

“We have been watching the connection between enthusiasts and our industry grow for more than a decade and, as the industry’s trade association, have a responsibility to help facilitate that connection in new and meaningful ways,” said James Lawrence, SEMA Chairman of the Board. “By creating SEMA Week and SEMA Fest, we will be able to maintain the integrity of the trade show that makes it a must-attend event for automotive professionals while introducing a new platform for enthusiasts and the industry to engage with one another.”

For 2023, SEMA Fest will take place at the Las Vegas Festival Grounds and be open to everyone, bringing together automotive enthusiasts with the aftermarket industry in a high-octane and immersive festival-like celebration of car culture. SEMA Fest will feature top music and entertainment, car show and cruise, VIP experiences, craft food, automotive celebrities, and motorsports. It will run alongside the popular SEMA Ignited Cruise and SEMA Show after-party, which draws thousands of enthusiasts on Friday night.

SEMA will continue to expand and refine SEMA Week over the next five years, rolling out new events and activities throughout the city of Las Vegas. The evolution of SEMA Week preserves the trade aspects of the industry and business components of the SEMA Show, while enabling enthusiasts from all over to join in the festivities and enjoy car culture-focused events throughout the SEMA Week experience.