Ford teamed up with RTR Vehicles to introduce the highly talked about all-electric Mustang Mach-E 1400 a very unique prototype developed to demonstrate the performance of electric vehicles. Ford follows this up after dropping the all-electric Mustang Cobra Jet 1400, Mustang Mach-E 1400 is projecting 1,400 peak horsepower and more than 2,300 lb. of downforce at 160 mph from its seven motors and ultra-high-performance battery Making its first appearance at a NASCAR race soon, Mustang Mach-E 1400 is designed to challenge perceptions of what electric vehicles can do with performance tuning and advanced technology. What it can do on the track will be the real question. 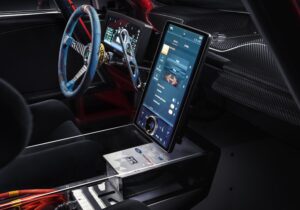 “Getting behind the wheel of this car has completely changed my perspective on what power and torque can be,” said Vaughn Gittin Jr., RTR Vehicles founder, motorsports champion and professional fun-haver. “This experience is like nothing you’ve ever imagined, except for maybe a magnetic roller coaster.”

How does the Mustang Mach-E reach these figures? Well, the Mach-E 1400 has seven motors – five more than even Mustang Mach-E GT. Ford and RTR’s design team put a lot of thought into this and it’s easy to tell. Three motors are attached to the front differential and four are attached to the rear in pancake style, with a single driveshaft connecting them to the differentials, which have a huge range of adjustability to set the car up for everything from drifting to high-speed track racing. “The challenge was controlling the extreme levels of power provided by the seven motors,” said Mark Rushbrook, motorsports director, Ford Performance. “Mustang Mach-E 1400 is a showcase of the art of the possible with an electric vehicle.”

The chassis and powertrain are set up to allow the team to investigate different layouts and their effects on energy consumption and performance, including rear-wheel drive, all-wheel drive and front-wheel drive. Drift and track setups have completely different front end configurations like control arms and steering changes to allow for extreme steering angles in drifting. Power delivery can be split evenly between front and rear, or completely to one or the other. Downforce is targeted at more than 2,300 lb. at 160 mph.

Mustang Mach-E 1400, which is set to debut at a NASCAR race soon, also serves as a guinea pig for experimental materials. The hood is made of organic composite fibers, a lightweight alternative to the carbon fiber that comprises the rest of the vehicle. Ford is investing more than $11.5 billion in electric vehicles worldwide, with the first global vehicle, Mustang Mach-E, available to order here now. The all-electric Mustang Mach-E starts hitting the streets in the U.S. at the end of this year.