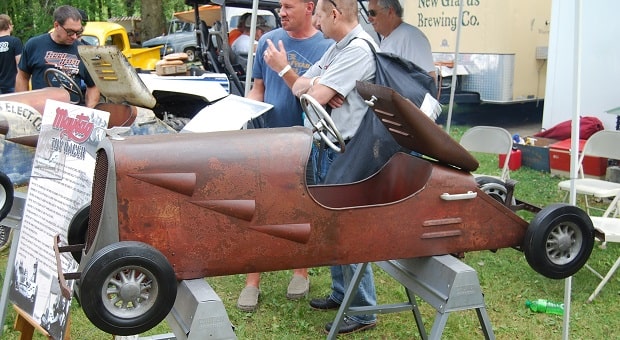 Remember the 1980s ads where the Maytag repairman – actor Jesse White – sat around all day with nothing to do, since Maytag washing machines were so reliable? In one ad, he compared the faithful and dependable washers to his dog Newton. At the end he says, “There’s one thing different from Newton to Maytag – Newton needs me.”

Maytag (started in 1893 as the Parsons Band-Cutter and Self-Feeder Co.) was co-founded by Fred Maytag, who wanted to make farm machines. In 1905, Maytag introduced a hand-cranked Pastime washing machine. By 1911, the first Maytag washer with a gas engine was made and the Maytag Multi-Motor was introduced in 1915.

Fred Maytag liked cars, too. He purchased the Mason Automobile Co. of Des Moines, Iowa in 1909. That company had originally been created by Fred Duesenberg, Augie Duesenberg and a lawyer named Mason. They had been producing an automobile called the Mason. Mr. Maytag renamed it the Maytag and began producing it in 1910. Maytag soon sold his interest in the company and it went out of business by 1917. 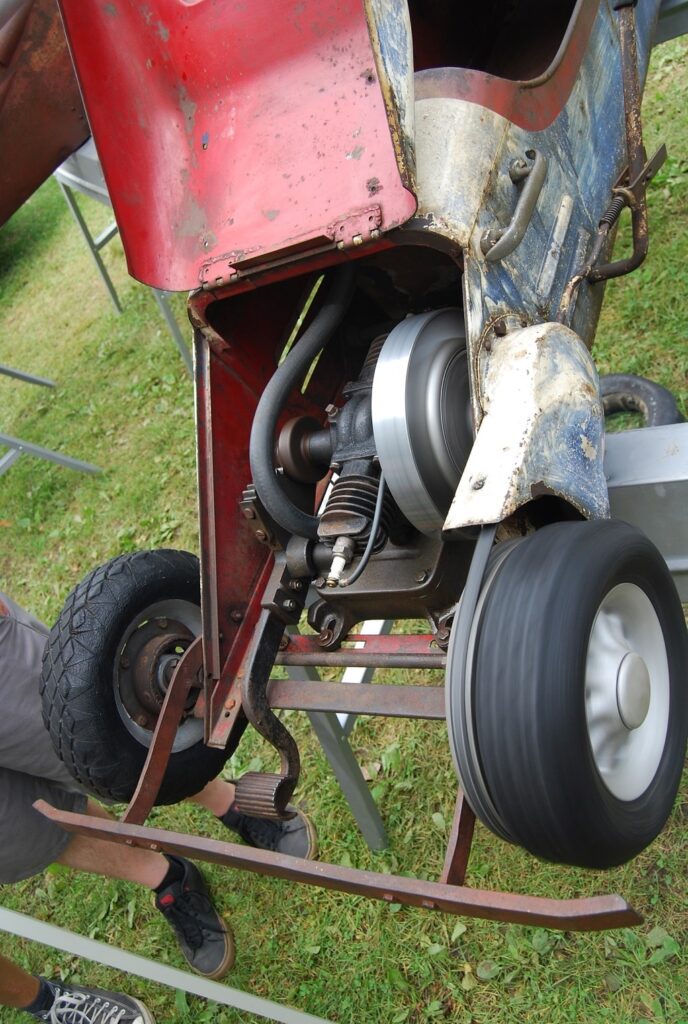 After the Maytag Model 92 Multi-Motor became a popular in washers, some dealers and Maytag employees used it in small cars they made for their children and for parade use. Some kids built their own mini racing cars. The Winston Corp. of Joliet, Ill. and the Grimes Mfg. Co. of Urbana, Ohio were the best known of a number of companies that made children’s cars using the Maytag 92 Mullti-Motor. There were plenty of surplus Maytag motors around, because the electrification of rural America was in progress at the time.

Some Maytag dealers acquired these cars and let youngsters use them to deliver brochures that advertised Maytag products or promoted in-home washer demonstrations. In other cases, the cars were used as giveaways to kids who earned points for arranging demonstrations or actual sales. The demos showed the dependability of Maytag engines.

Toy Racers actually made by Maytag for sales promotions were manufactured from Oct. 11, 1934, until Dec. 1, 1941. Some were used as dealer promotional items; some were given away as contest prizes and some were sold as children’s gifts. Maytag Toy Racers were also sold to amusement parks for use as carnival rides. Among these was a fleet of Maytag Toy Racers used as a featured attraction and press car at the Texas Centennial Exposition, which was held from June 6 to November 29, 1936 in Dallas. 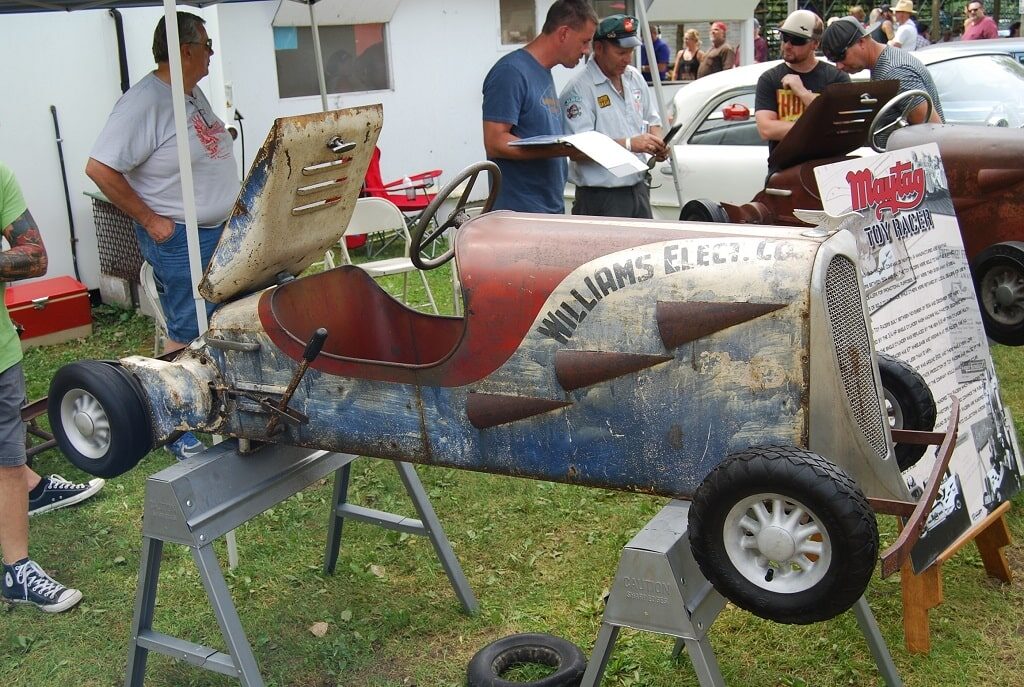 Maytag Toy Racers built between November of 1934 and December of 1937 were powered by the ¾-hp single-cylinder Multi-Motor used in washing machines. Beginning with the serial no. 934 Toy Racer, the one-cylinder engine was replaced by a new 5/8-hp twin-cylinder Multi-Motor. The Toy Racers had a 67-inch wheelbase and tipped the scales at 195 lbs. This power-to-weight ratio provided the tiny cars with a top speed of 10 mph.

The selling price of a Maytag Toy Racer was around $100 and potential buyers had a long wait to purchase one. Maytag’s production of Toy Racers was halted at the end of 1941 when it became clear the company had to be revamped for wartime production. 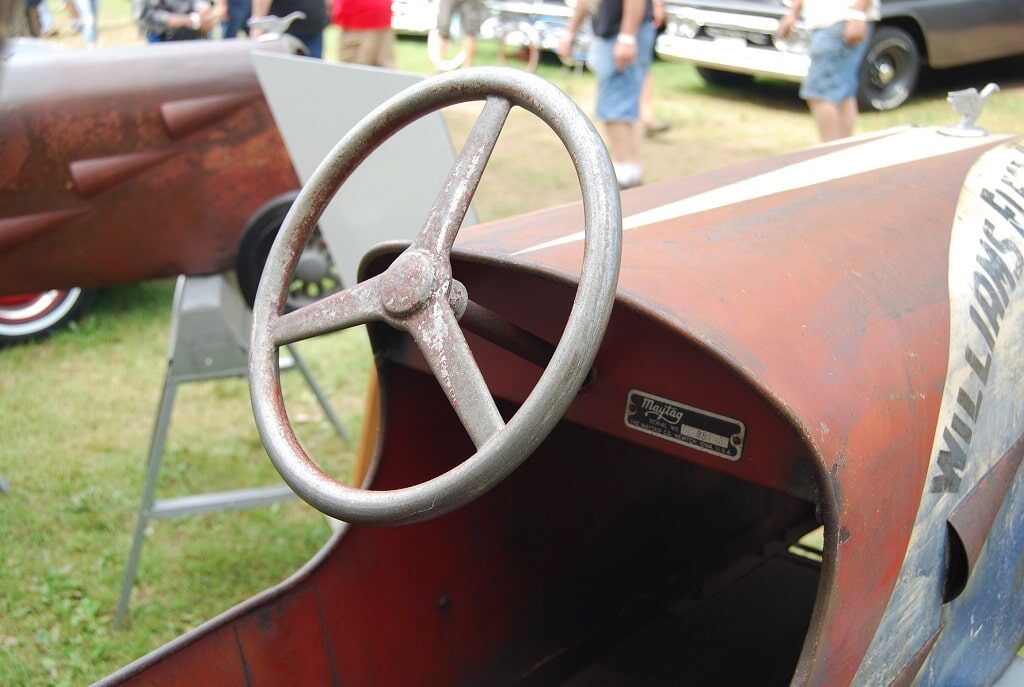 Maytag had manufactured nearly 500 Toy Racers by that time. These had aptly demonstrated the power and durability of the Maytag Multi-Motors and helped convince the public of the quality of Maytag washers. Around 35 Maytag Toy Racers are rumored to have survived into modern times. Hopefully, all of them have found their way into collections across the USA. Additional information about the Maytag company and its various products, including the Racer, may be found at www.maytagclub.com.

The Maytag Toy Racers shown here were brought to the 2019 Symco Hotrod & Kustom Weekender in Symco, Wis., by Troy and Justin Wendorff of Mayville, Wis., who are members of the Badger Steam & Gas Engine Club (www.badgersteamandgas.com). The car lettered up for the Williams Elect. Co. is a 1935 model with a ¾-hp one-cylinder Multi-Motor. The other car is a 1938 and has the larger 5/8-hp two-cylinder Multi-Motor. 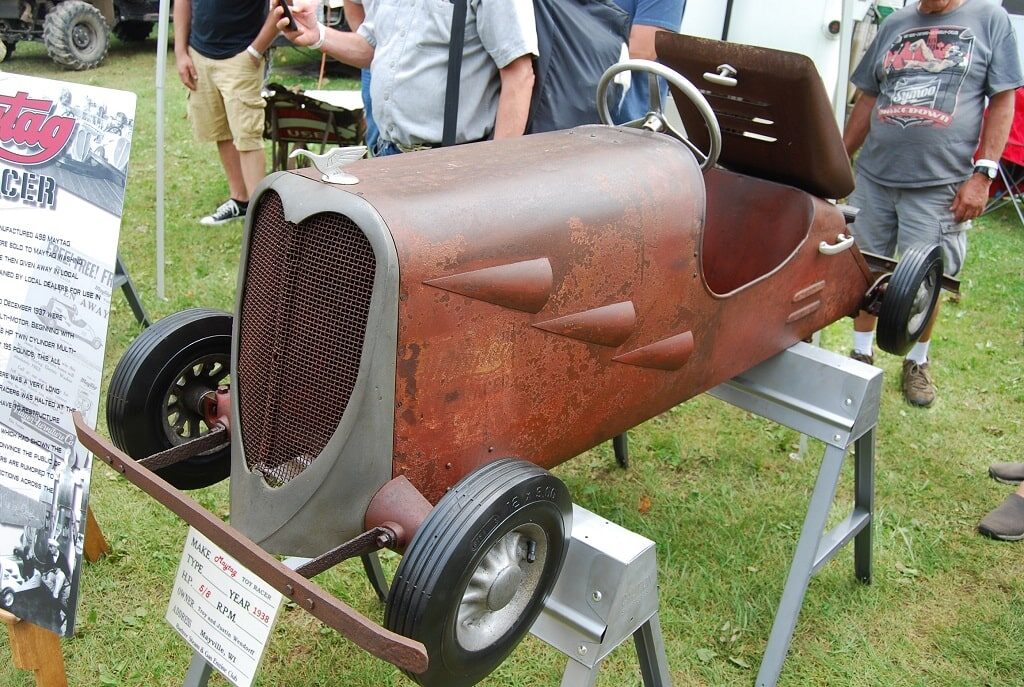