“To say I’m excited is a huge understatement. I can’t wait to get the Black Mamba out there and sink my fangs into the competition,” declared team owner and driver Haney, who also owns and promotes the all-eighth-mile MWPMS.

“Seriously, my plan is to go to Memphis and drag every single one of ’em from one end of the race track to the other. That’s my goal. So if you’re lined up beside me, you better be nervous and you better have your stuff together, because me and Black Mamba are poised to strike.”

Fresh out of Jerry Bickel Race Cars in Moscow Mills, MO, Haney’s new car rocks a Pat Musi 959 c.i. powerplant feeding its nitrous-boosted horsepower through a lightweight billet Lencodrive that’s outfitted with a Ty-Drive and Neal Chance torque converter. Versatility was taken into account, too, as the sinister-looking Camaro also is configured to race with relatively easy alterations in either Pro Mod trim or as a Radials vs. the World entry.

The car was revealed last month at the MWPMS event in St. Louis, but Black Mamba didn’t take to the track there. Instead, immediately following the race it was delivered to Switzer Dynamics in Denver, NC, where KHR crew chief Brandon Switzer completed final assembly and tuning.
“I told Brandon to build what he wanted and he wanted the Black Mamba to be from Bickel, so that’s where we went. And that’s not saying I didn’t have a great race car before,” stressed Haney, a Tulsa-based new car dealer whose previous Pro Mod came from Larry Jeffers Race Cars in House Springs, MO. 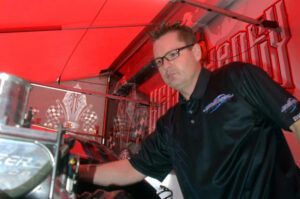 “Larry built me ‘Notorious,’ an absolutely outstanding race car that served me well, delivered many wins and even a Mid-West Series championship. And he’s a good friend of mine still. Larry’s also a sponsor of the Mid-West Pro Mod Series, as is Jerry Bickel. They’re both great guys that know how to take care of their racers.

“And let’s not forget that Black Mamba is the Summit Racing Equipment car. Summit is just great people who believe in giving back to the sport and they believe in Keith Haney, so I’m going to go out there and take care of business for them. And if you need a discount from Summit, just let me know and I’ll give you a 10-percent discount code. I’m serious, just call me up and I’ll give you the code,” he said.

“Along with Lucas Oil, who has been with me for 12 years, Strange Engineering, RacingJunk.com, I feel so fortunate to have so many great sponsors that believe in me and believe in the Mid-West Series.”

“I can’t wait to drive the car. Finally to come out with adequate power and a top-of-the-line race car is a dream,” Haney said. “We had one specific goal and that was to build the fastest big-tire car in the world–period. I built the car for that reason we didn’t lay up one bit. It’s the most expensive race car I’ve ever built in my entire life; maybe one of the most expensive race cars ever built.”

“It’s exactly the same as mine except his car is a ’69 Camaro. Exactly the same power, exactly the same build, two different body styles, but we’re coming as a true two-car team with Brandon Switzer tuning them both,” he said. “We’re going to test together and then we’re going to roll into Memphis together as a nitrous power group to take down every one of the screw cars–and anybody else that gets in our way.” 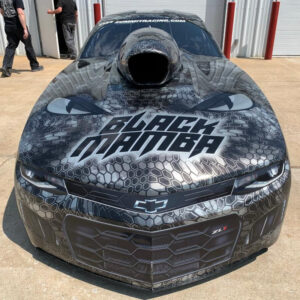 With only two events remaining on the 2019 MWPMS schedule, at Memphis and the official season ender Oct. 11-12, at Tulsa, Sackuvich currently sits fourth in points while Haney is sixth, with both remaining mathematically within reach of the championship.

“And guess what? I want to look over at those screw cars and say, ‘Hey, we’re going to take some weight off you guys now.’ I mean, usually you’re backing everybody else down because of what a nitrous car can do, but how cool would that be to make a rule change because of nitrous to the benefit of a screw car, turbos, and all that they have?”

Regardless of the championship outcome, most MWPMS stars will race one more time, too, in the Atomizer Racing Injectors MWPMS Invitational, to be run Oct. 16-19, within the NHRA national event at the Texas Motorplex, near Dallas.

“That’s going to be a tremendous event for everyone in our Mid-West Series, but on a personal level, I can’t wait to run the Black Mamba through the traps in front of a huge NHRA crowd,” Haney said.

“We built the car that we wanted to build and now it’s gotta’ prove itself on the race track. It’s the lightest car ever to come out of Bickel’s race shop, certainly the lightest car I’ve ever owned, it’s got all the right parts and pieces, we’ve got the best people around it. I’ve assembled the absolute, in my opinion, dream team. Now we’re all going to see what happens.”