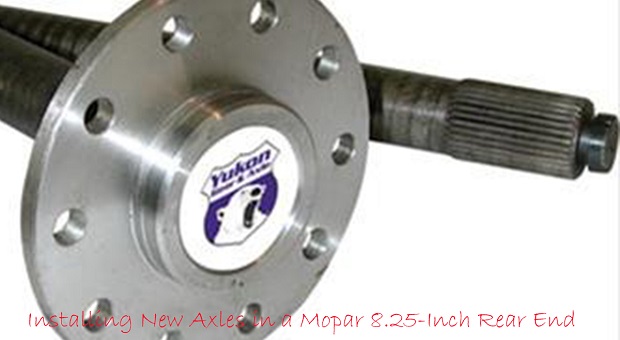 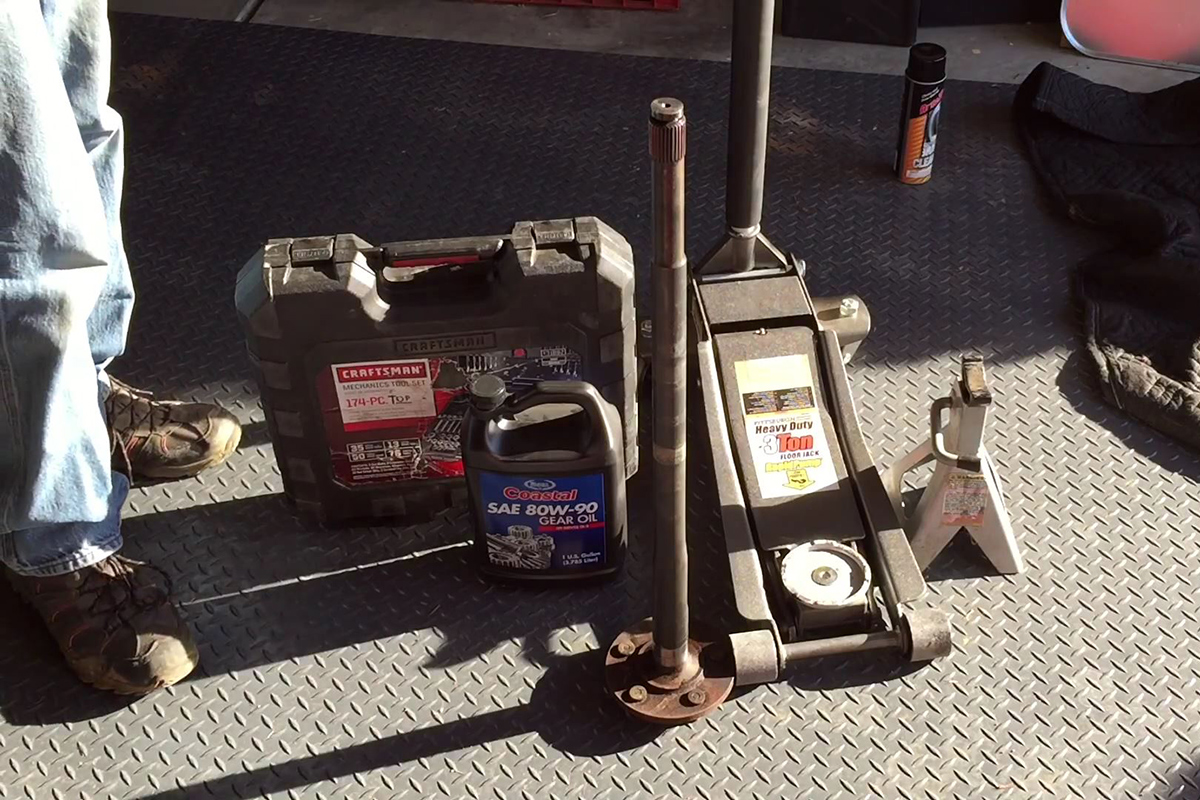 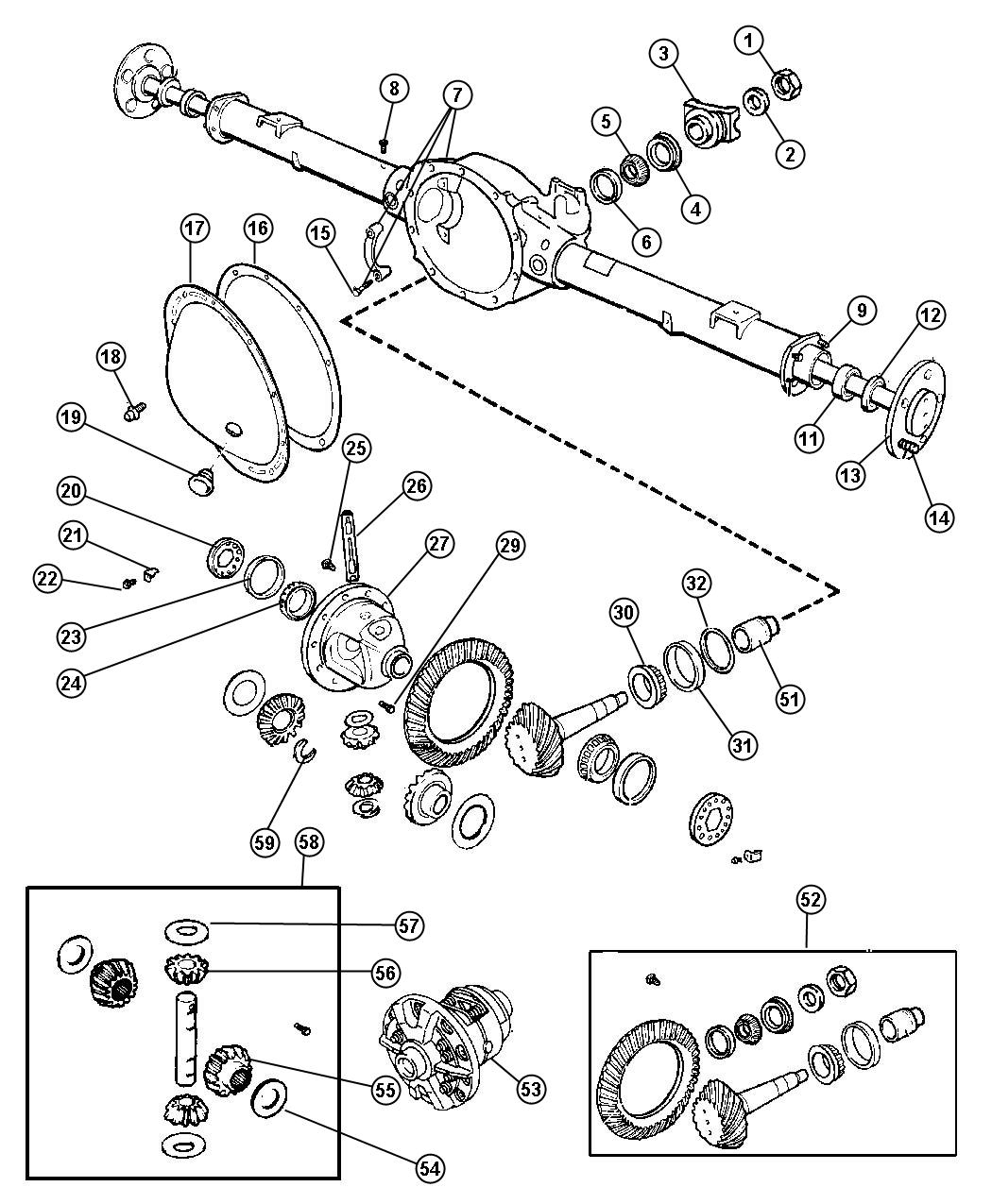 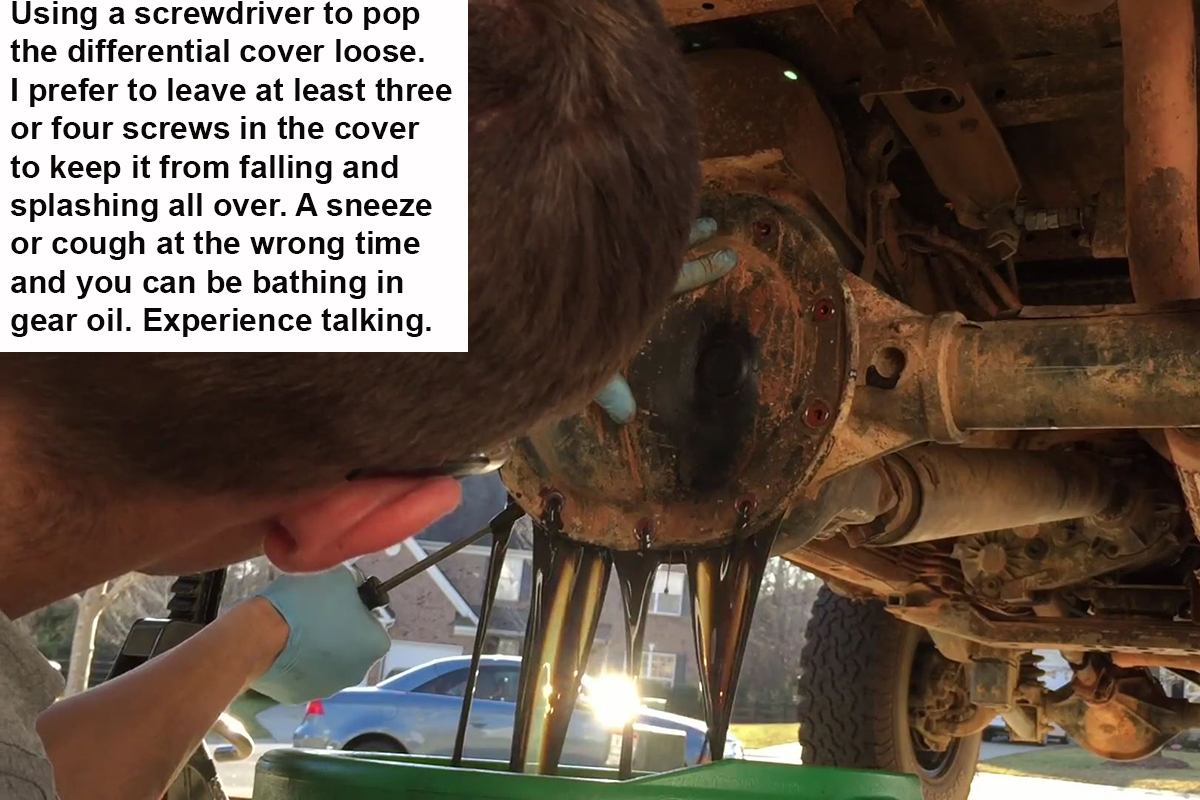 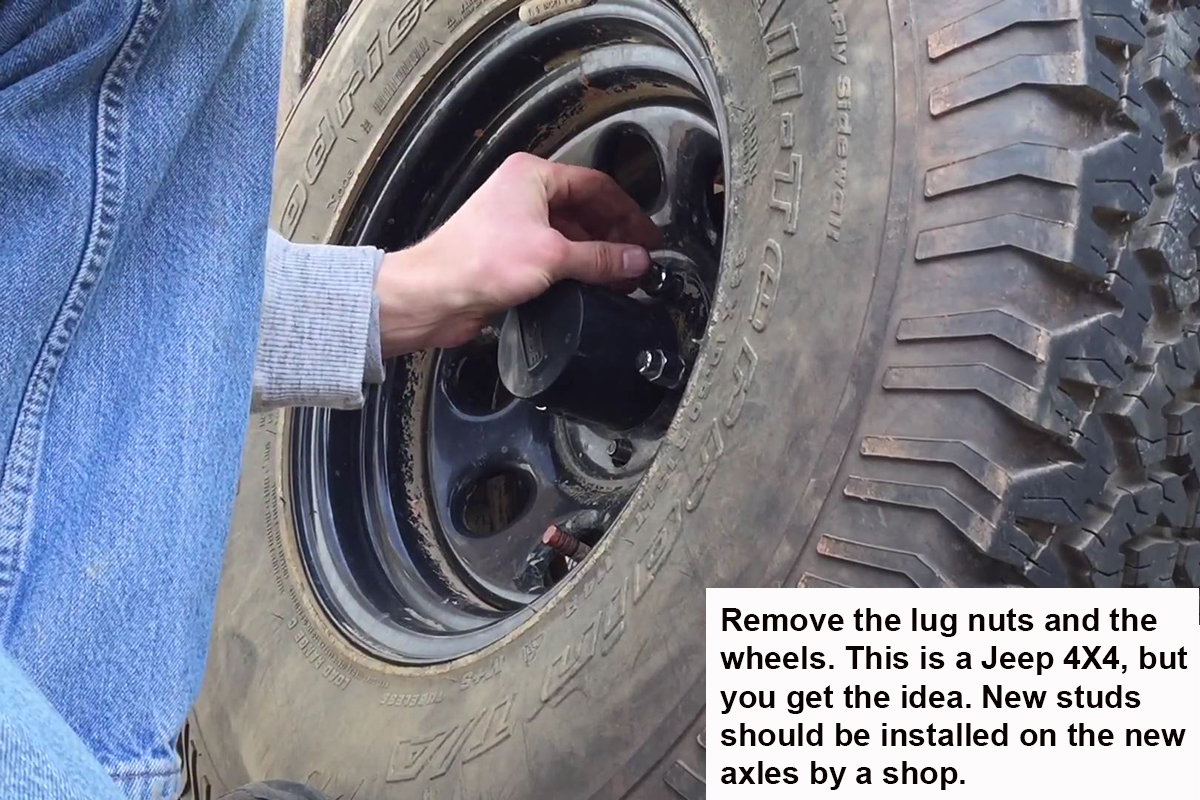 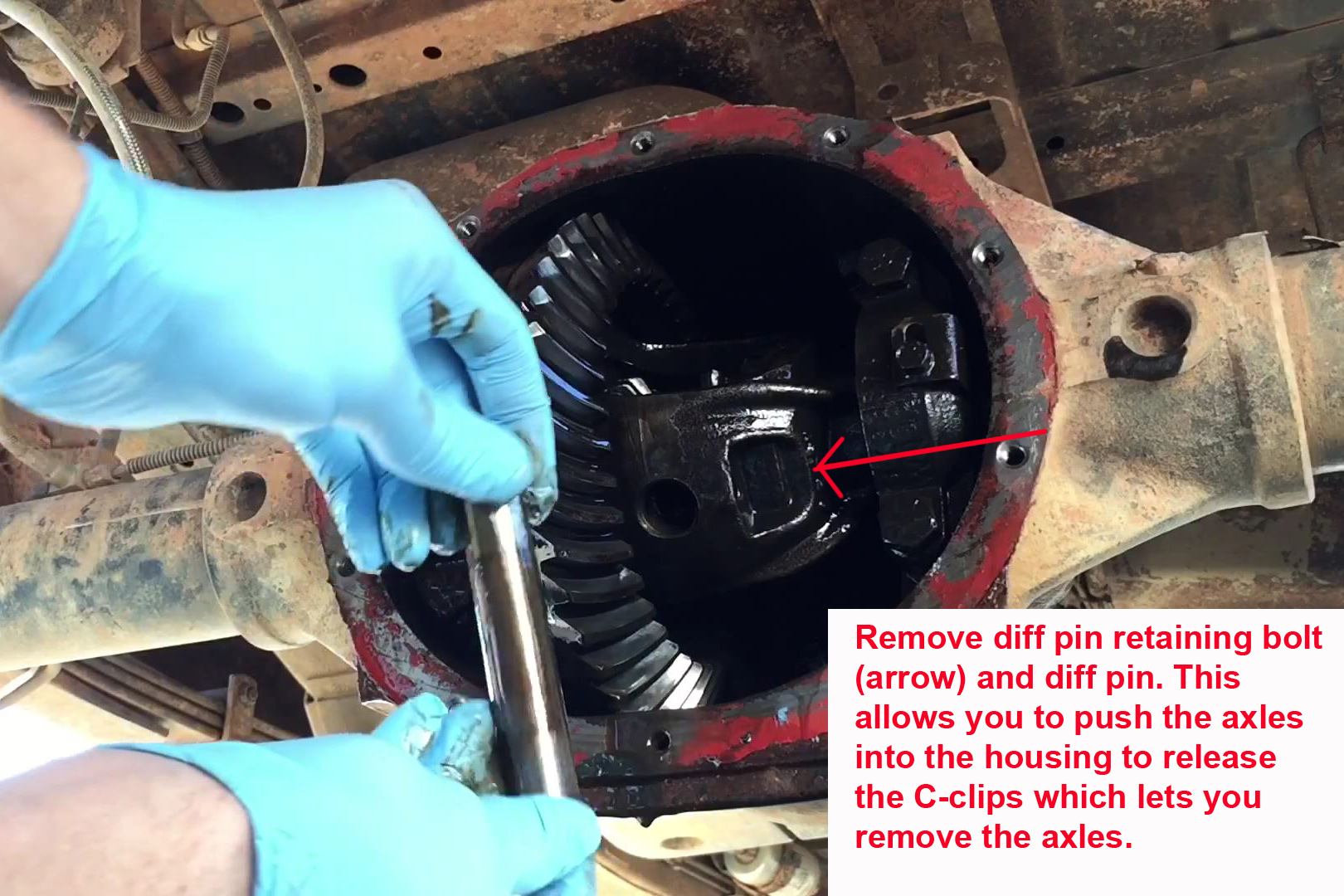 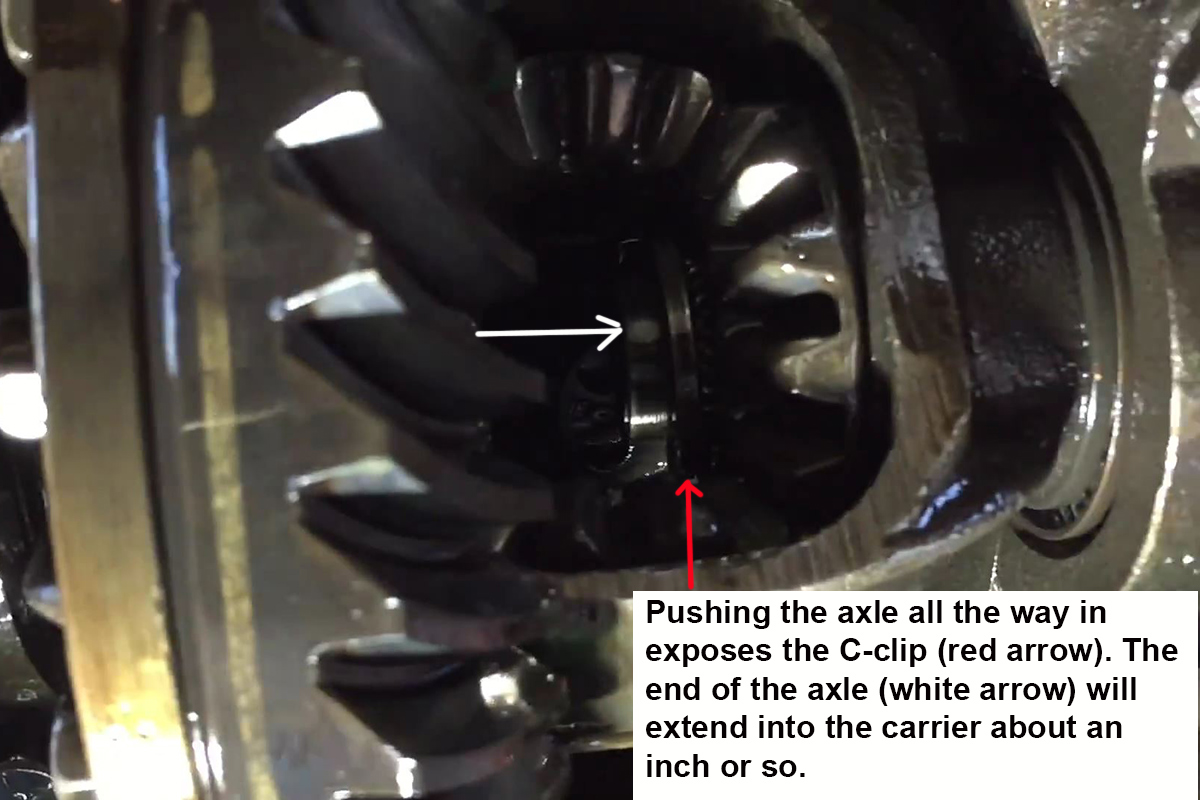 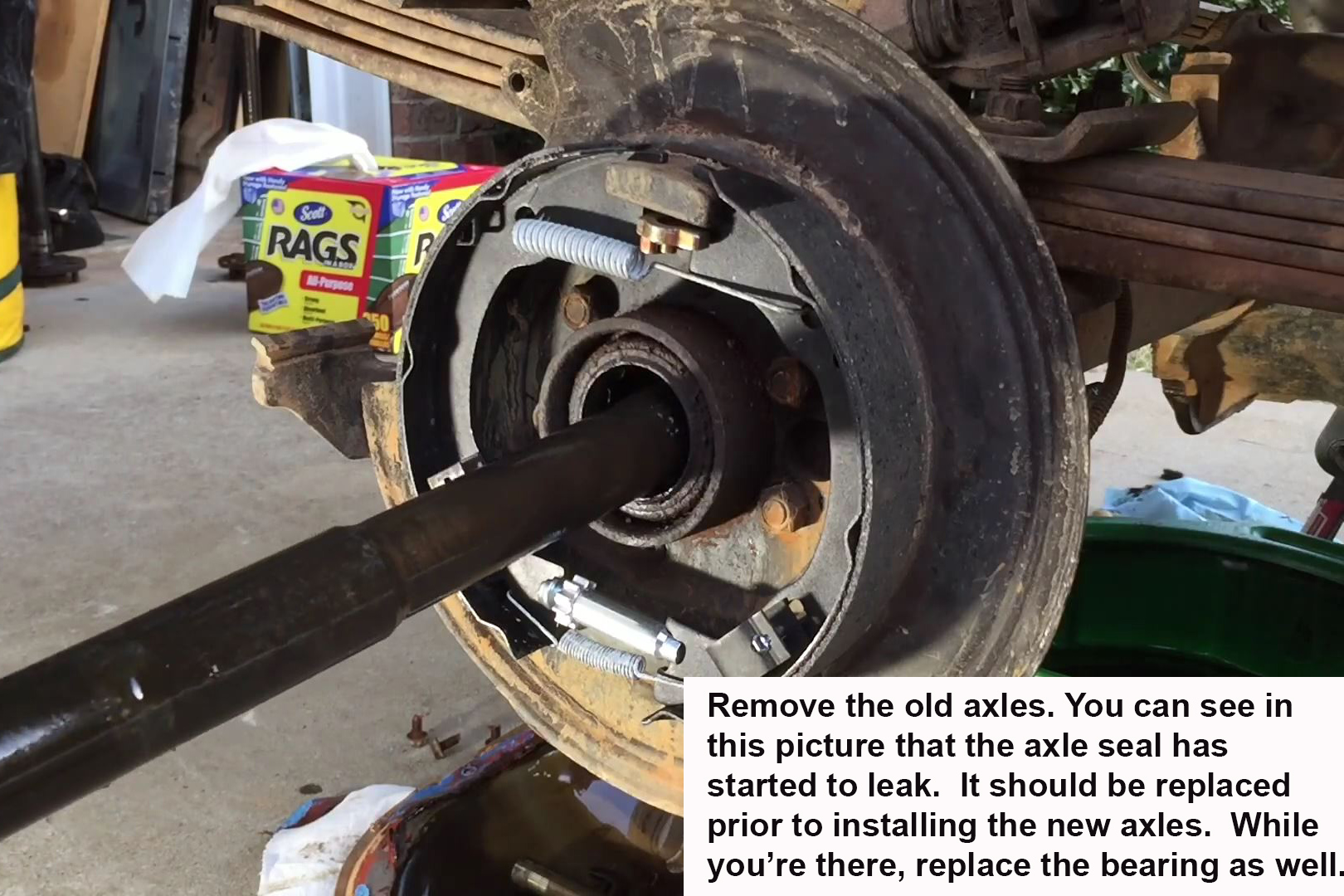 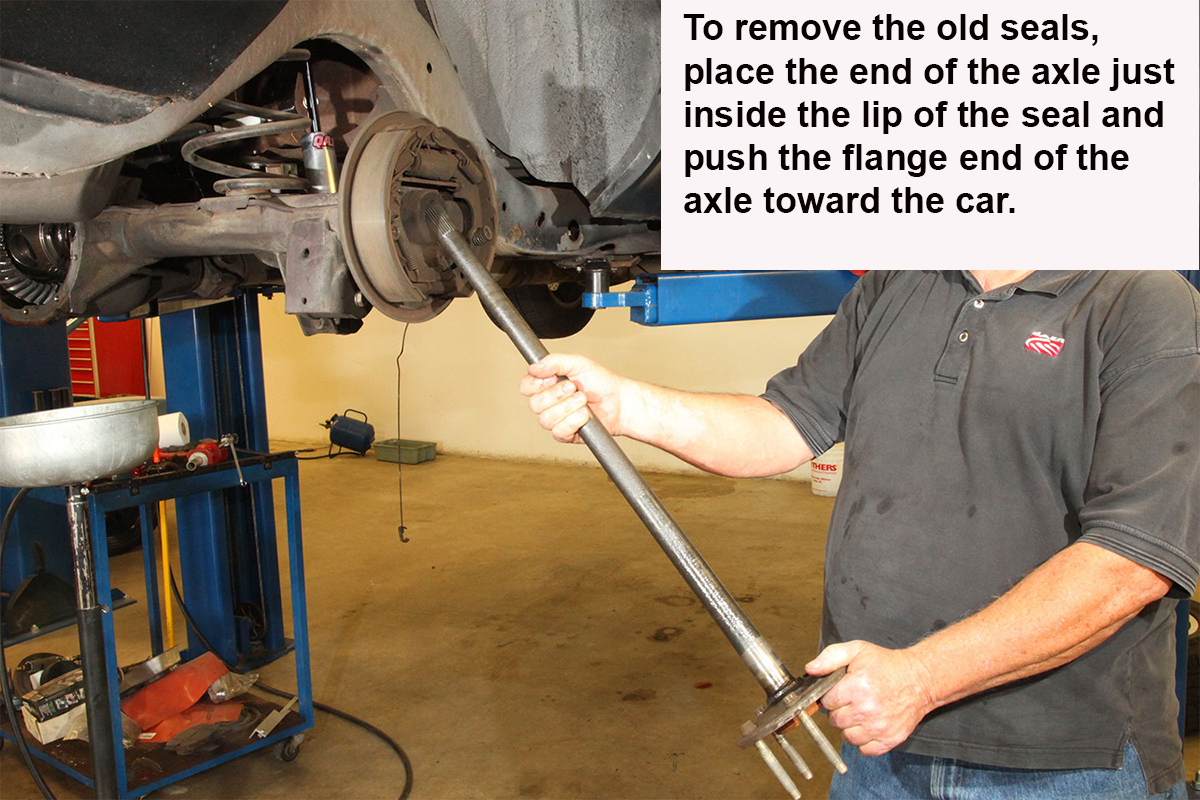 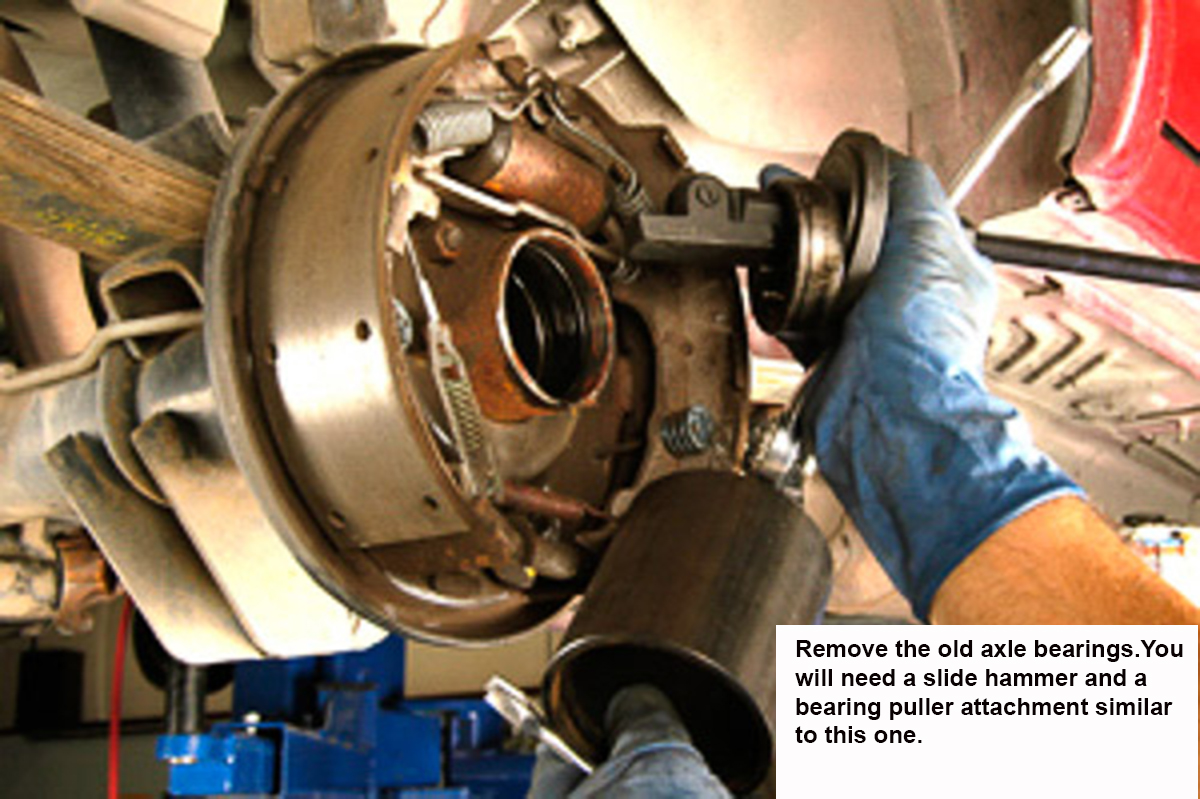 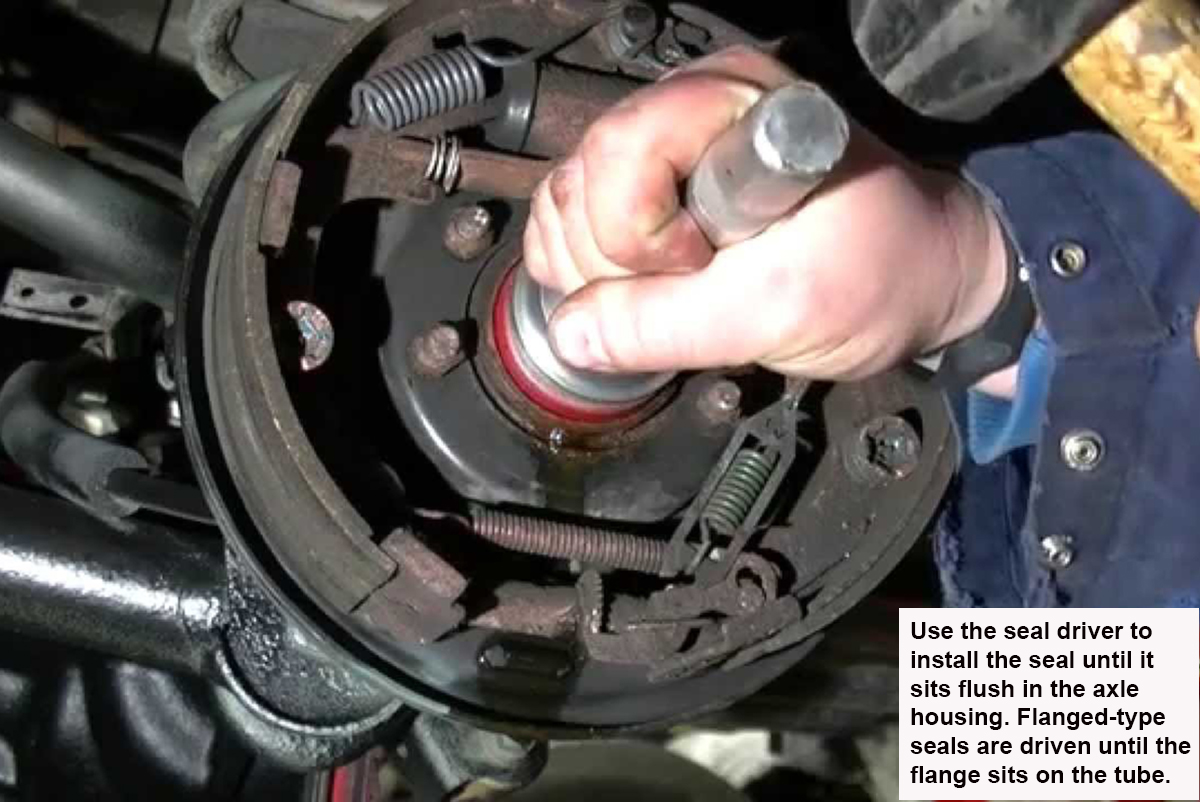 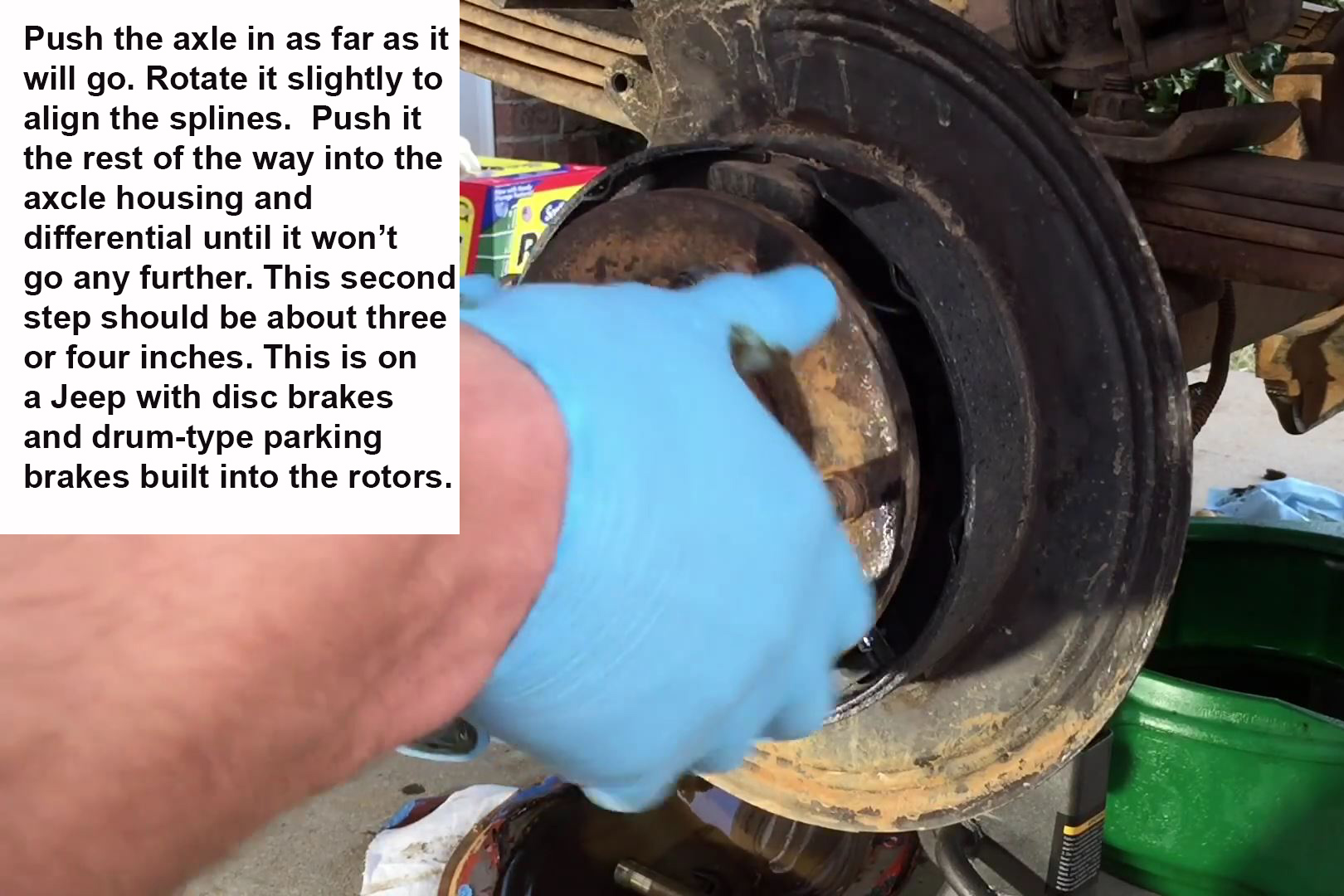 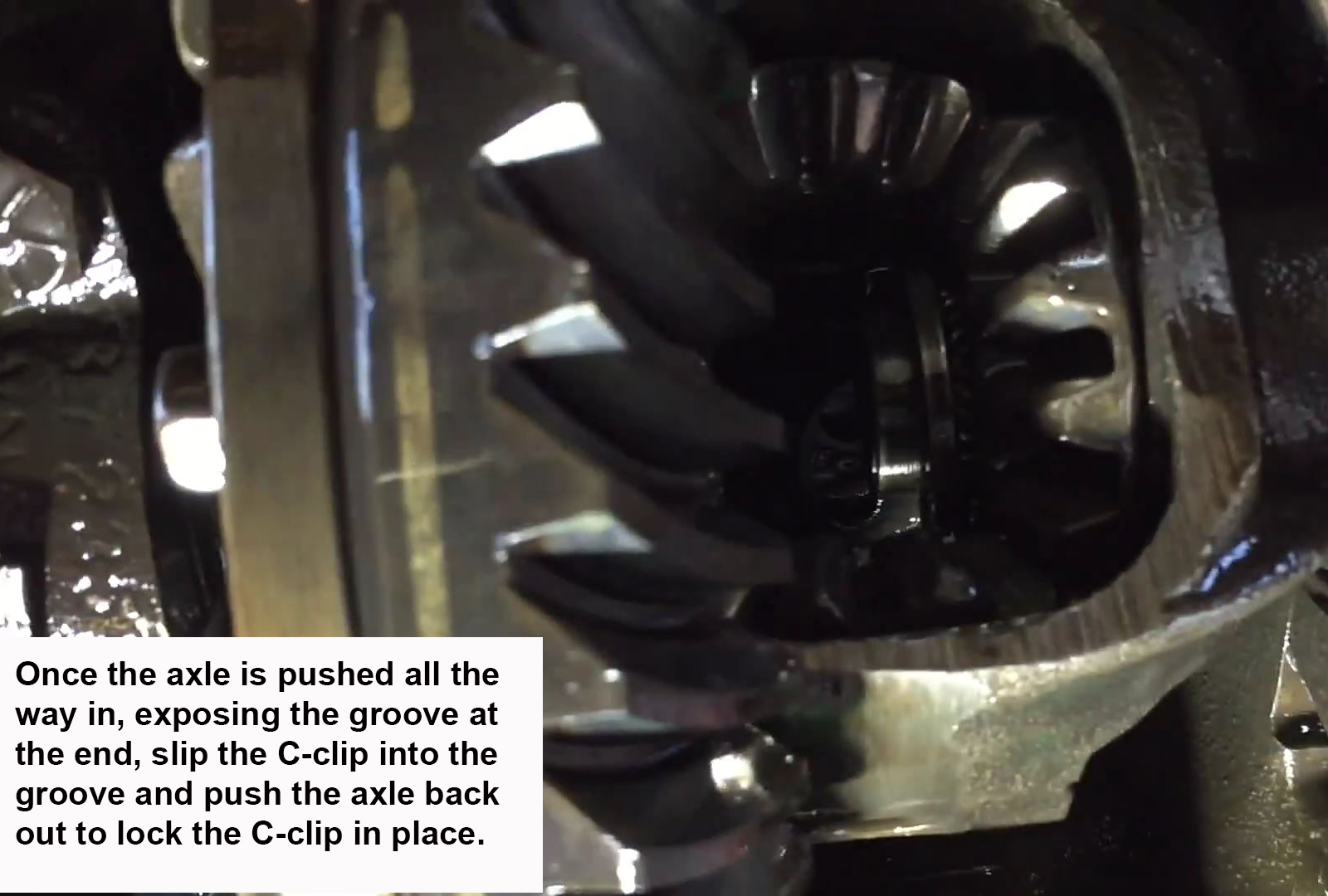 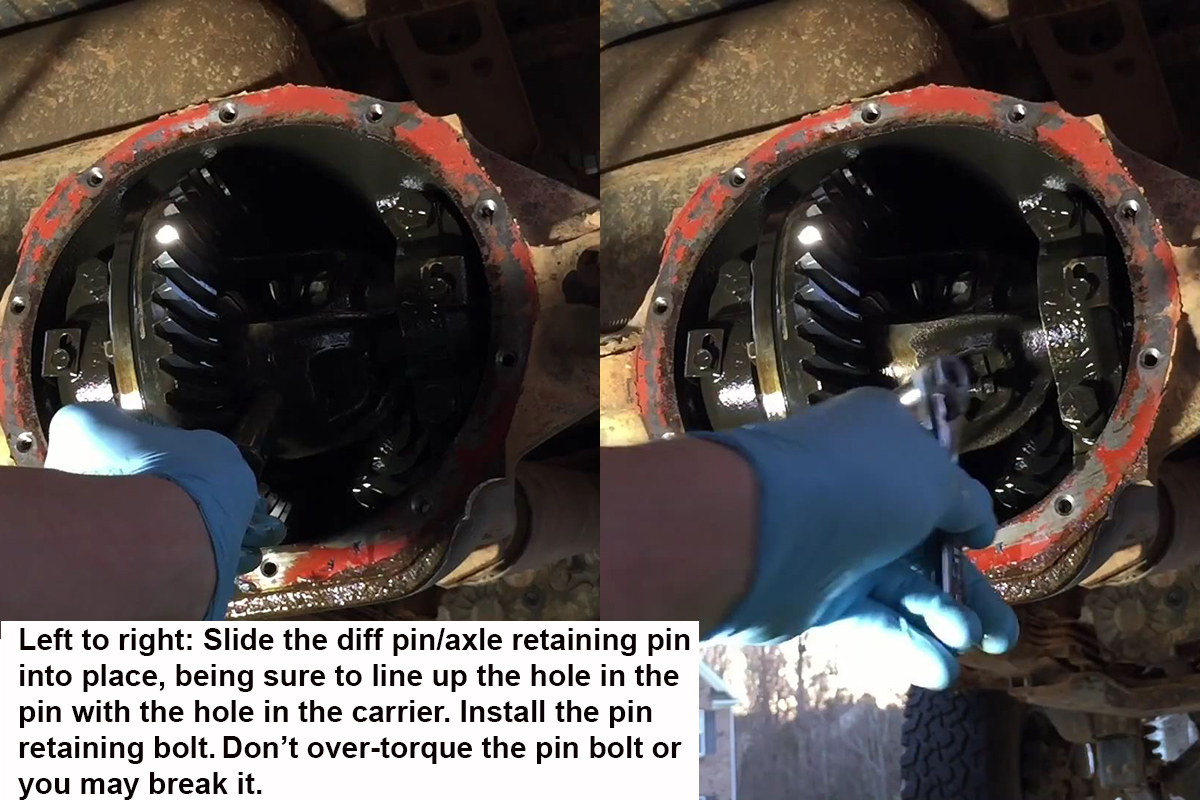 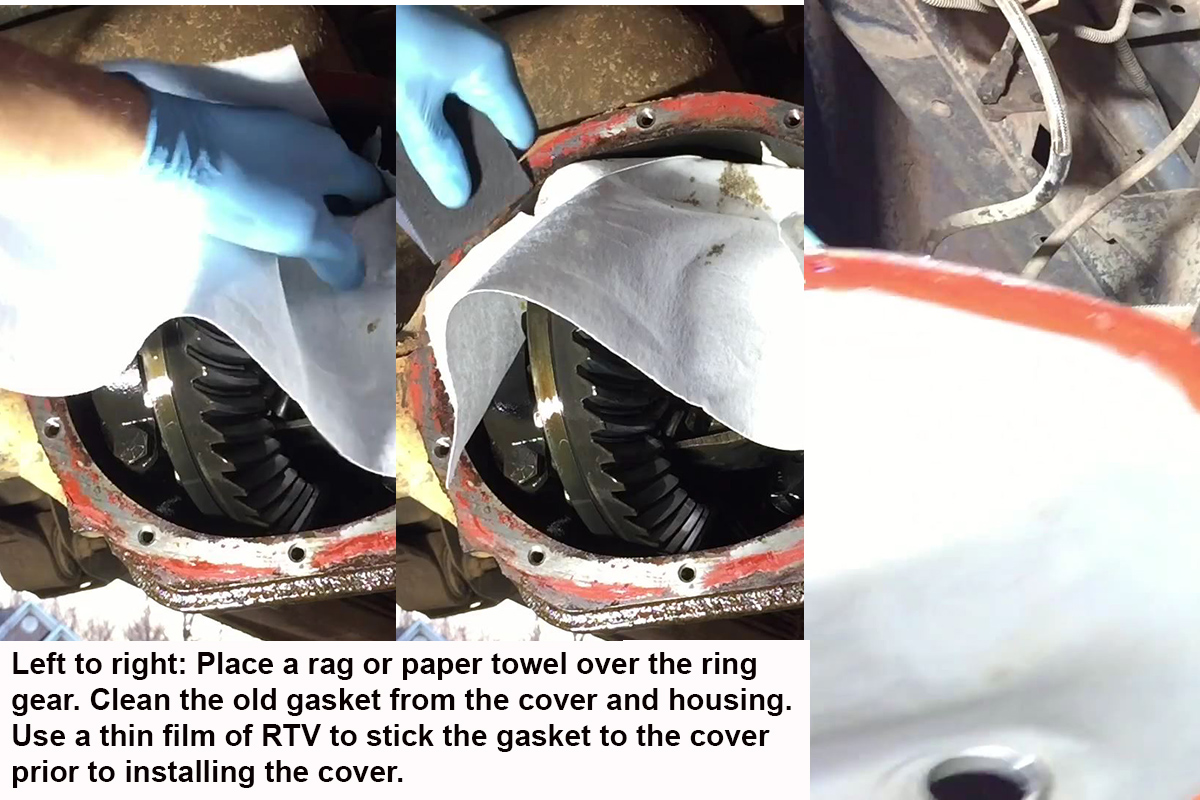 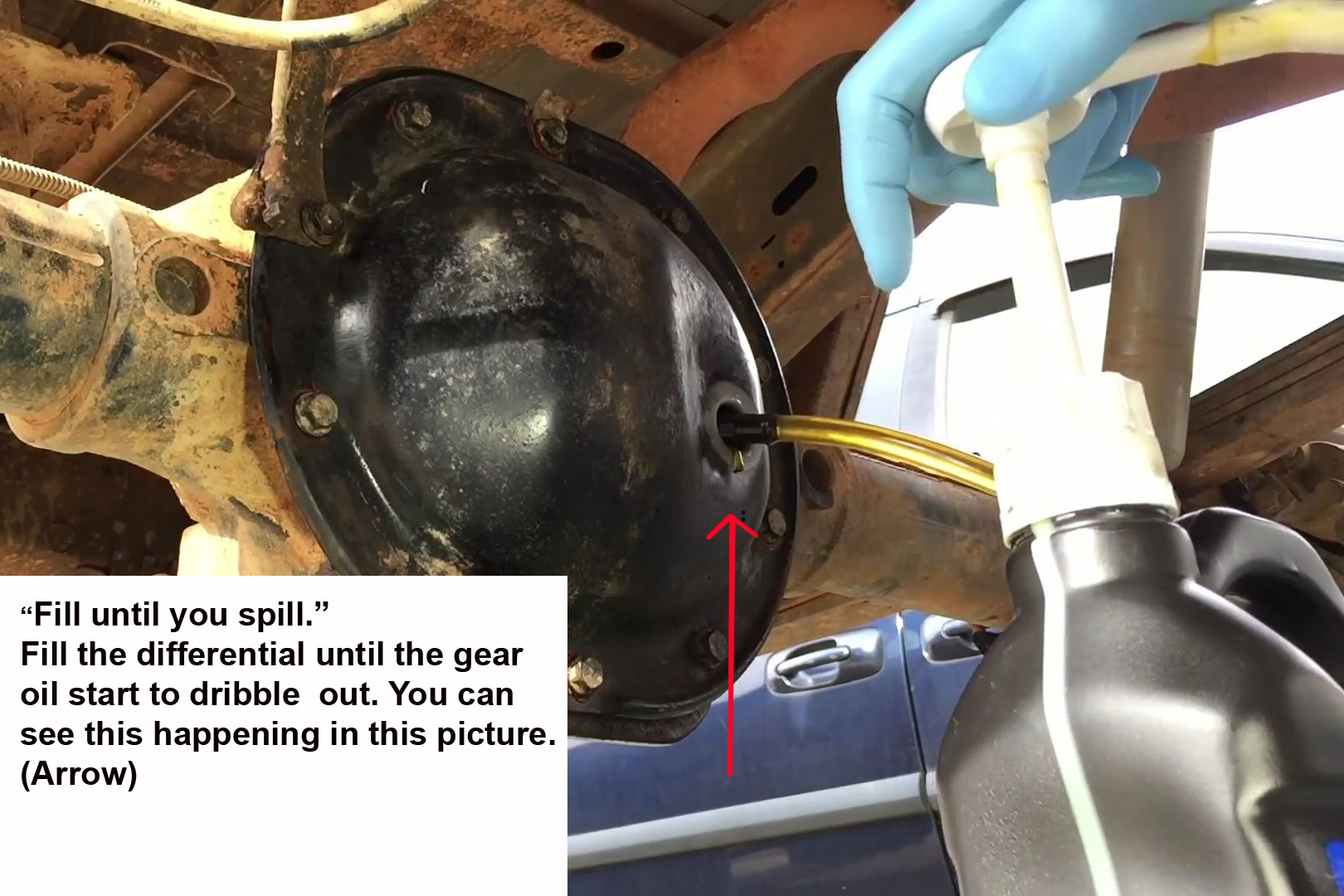 Chrysler’s 8 ¼ inch rear end was installed in “A,” “B,” and “C” Body vehicles from about 1969 through the 1973 model year. It’s also installed in a number of Jeep products. While not as strong or reliable as the 8 ¾ inch rear end, it’s still a great differential. However, if you’re building up a strip burner or a circle track machine, you’ll want to install new axles so you don’t end up twisting out of them. Let’s see what that entails.
Other than the axles and a few specialty tools, most of what you’ll need you should already have.
• Floor jack and two jack stands or a lift
• Impact gun and lug nut socket (if you have an air compressor)
• Socket set and ratchet with extension
• Slide hammer
• Axle puller attachment
• Bearing/seal puller attachment
• Seal and bearing driver
• Hammer
• New axle bearings
• New axle seals
• New axles
• New differential cover gasket
• Gasket scraper/remover
• RTV Black sealant
• 80/90 W gear oil
• Catch pan
• Shop rags
(Image courtesy of Chrysler Corp.)

Gather all your tools and parts together in one spot next to where you’ll be doing the work. Park the car on a flat and level surface, not in your driveway if at all possible. Don’t set the parking brake. Using two blocks of wood, block the front and rear of one front wheel.

If you don’t have an air compressor and impact gun, loosen the lug nuts on both rear wheels. Remember, most Mopars from before 1968 had left hand threads on the left side of the car. Slide the jack under the differential housing and raise the car until there’s enough room for you to slide under it safely and comfortably. Place the jack stands under the axle housing just inside of the brake backing plates. Carefully lower the car onto the jack stands. Remove the jack.
Slide under the car with the catch pan, the ratchet, an extension, and a half-inch socket. Slide the catch pan under the differential. Loosen the bolts on the differential cover, but don’t remove them. Crack the seal on the cover, allowing the gear oil to drain. You may need to use a screwdriver, but be careful if you do. Once the flow of gear oil slows down, remove the cover and set it aside.
Slide out from under the car and use the lug wrench to remove the lug nuts and the wheels. Finally, pull the brake drums and set them aside. You may need to use the hammer to “convince” the brake drums to come off.
Slide back under the car with your ratchet, a three-inch extension and 7/16-inch and 3/8-inch sockets. Rotate the differential carrier until you see the head of a small pin/bolt in the side of the carrier. It will be lined up with a circular opening in which you can see a chrome pin about 5.8-inch in diameter. Use the correct socket and remove this bolt. Due to space restrictions, you may have to use a wrench, but a socket will usually reach it.
Rotate the carrier and allow the chrome axle retainer pin to slide out of the carrier. Slide to each side of the car and push the axles inward about half an inch to free the C-clips. Slide back to the differential, reach a couple of fingers into the center of the carrier, and remove the two C-clips that lock the axles in place.
Slide back out from under the car and go to one of the two sides. Firmly grasp the axle flange and pull the axle straight out. If the axle is recalcitrant about coming out (for example, if it’s stuck due to age) you may need to screw the axle puller onto the slide hammer and give it a little yank. Repeat this on the other side. Remove the axles completely and set them aside.

Slide back under the car and put the axle pin and the axle pin bolt back in place. Don’t tighten the pin bolt; just make sure it’s in far enough to keep the axle pin from falling back out if you accidentally rotate the axles while doing the rest of the work.
If the axle seals weren’t leaking before starting this work, it isn’t absolutely necessary to replace them, but it is cheap insurance. You can use a special tool or a prybar to remove the seals, but I prefer to use the end of the old axle. Simply insert the inner end of the axle behind the seal and wedge it out by pushing the lug nut end of the axle towards the car. Do this on both sides.
Same message here as the last step: If the axle bearings aren’t making noise, you don’t absolutely have to replace them, but it is good practice and cheap insurance against having to pull everything apart down the road somewhere.

Attach the bearing/seal puller to the slide hammer and slide it inside the axle tube until the puller flap clears the bearing. Allow the flap to hang vertical and pull the puller out until the flap rests against the inner edge of the bearing. Give the slide hammer a few sharp slaps until the bearing is out. Repeat on the other side.
Find the correct bearing installer cap. It’s the one that is a millimeter or two smaller in diameter than the axle shaft. Attach it to the installer handle. Insert a new bearing in the axle tube and give a few taps on opposing sides with the hammer to make sure it doesn’t fall out. Place the installer against the bearing and firmly and sharply strike the end of the installer handle with the hammer. Pay attention to the sound the tools make. When the bearing is properly seated, that sound will change.

Wipe a very thin film of RTV Black around the outer circumference of a new seal. Use the hammer to lightly tap it on opposing sides to keep it from falling out. Install it the rest of the way with the installer tool until the flange rests against the axle tube or the seal is flush with the end of the axle tube, depending on whether you have the flange-type seals or not.
Wipe one new axle from end to end with gear oil to lube it up. Use your finger to lube up the inner diameter of the seal with gear oil. Slowly insert the axle into the housing, being sure to support the axle so it doesn’t slide roughly against the seal as it goes in. When the axle reaches the carrier, you will most likely need to rotate the axle slightly to get the splines lined up. Slide the axle in until it bottoms out. Repeat on the other side.
Slide under the car and remove the axle pin and its retaining bolt. Now, reinsert the C-Clips into the carrier housing in the grooves near the end of the axles. As you install a clip, push the axle out to lock the clip in place.
Once both C-clips are installed and seated, align the axle pin with the retainer bolt and slide it back into place. Reinstall the retainer bolt and tighten it. I like to grab the head of my ratchet and tighten this bolt with my wrist. This ensures that I don’t snap it as I’m tightening it.
Using some paper towel or newspapers, wipe out the bottom of the differential housing to remove all the old gear oil. Use the gasket scraper/remover/cleaner and remove every trace of the old gasket from the housing and the cover. Apply a light film of RTV Black to the cover and housing.

Insert two bolts into the cover and align the gasket so all bolt holes line up. Raise the cover up to the housing and hand tighten the two bolts. Install and hand tighten the rest of the bolts. These should be torqued down to no more than 25 lb-ft so as to not warp the cover and cause leaks.
If you’re lucky, you bought one of the bottles of gear oil with a pump, or already had a pump. Use a screwdriver to pop the differential plug off the cover. Refill the differential with the gear oil until it just starts to dribble out. If you bought the squeeze bottles, you may need a 3/8-inch diameter tube to get all the gear oil from the bottle(s). Also, if required, don’t forget to add the Chrysler/Dodge hypoid gear oil additive. Reinstall the diff plug.

If the axles you bought didn’t come with lug studs, I recommend taking them down to a machine shop or parts store and having new ones installed, and getting new lug nuts before starting this project. Unless you have the right tools and know what you’re doing, you could damage the axle flange and/or the studs during installation.

Drive the car for about 200 miles without really getting on it to break the new parts in. After that, drive it like you stole it! I’ll see you at the track. Stick around for the next article in the series: How to Install New Gears in an 8.25-Inch Mopar Differential.
Back to Post
About Mike Aguilar 388 Articles
Mike's love of cars began in the early 1970's when his father started taking him to his Chevron service station. He's done pretty much everything in the automotive aftermarket from gas station island attendant, parts counter, mechanic, and new and used sales. Mike also has experience in the amateur ranks of many of racing's sanctioning bodies.