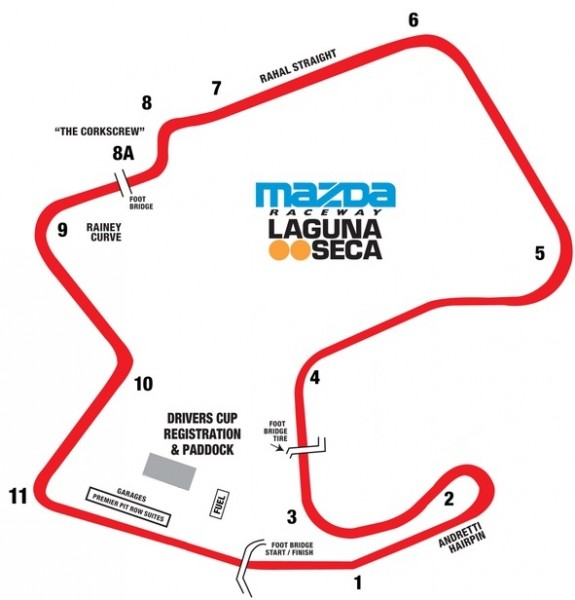 Anyone with a drop of race fuel in their veins has dreamed of a trip to Monterey’s Laguna Seca. The Californian track is known worldwide for its dips and twists, the scenic hills rolling behind it – John Steinbeck country – and the sand-swept scenery, as well as the famous Corkscrew. It’s a course that combines fast corners and technical sections, tests both bravery and technique and rewards those who understand the bevy of nuances that make it such a challenging and thrilling place to drive a car on the limit.

Once you soak in the scenery and strap into your car, a slow, exploratory lap is worthwhile. The crests and bumps are much more prominent in person than in Gran Turismo, and the crests are often blind, too! The various corners, blind entries and massive drops require constant focus, and without a level-headedness and some respect for the track, it’s easy to drop a wheel, pick up some sand or graze a guardrail.

Take a deep breath and shake out the shoulders as you round Turn 11 and roll on the throttle. Charging down the straight, the impulse on the first laps is to lift slightly as you approach the crest known as Turn 1. The important thing is to try and brush the edge of the blend line on the left so you’re not making any major steering inputs over the crest. The car gets slightly light over the hill, and it’s nerve-racking at first. Over time, you’ll gather the confidence to stay flat over the hill, and assuming you’ve taken a straightish line through, you’ll have plenty of time before you need to brake for Turn 2.

Turn 2, also known as the Andretti Hairpin, feels absurdly slow after the charge down the straight. The key is to brake fairly late with the car straight. If you can manage to get a direction change done beforehand so that you’re braking towards the first apex, that’s ideal – however, it’s only feasible with lighter cars in most cases. Carrying the brake into the corner will help rotation, and since this is a double-apex corner, it requires a little finesse and a patient application of the throttle to not end up on the rumble strips, which are usually very sandy. If you miss the first apex, it’s not the end of the world and a diamond line works – just make sure the second apex is dealt with neatly and you get on the gas smoothly.

This leads onto the short spurt between 2 and 3, and it’s helpful to avoid turning into Turn 3 early. The sand swept onto the track here has a tendency to make people run wide, and the corner is sharper than it appears on the entry. It’s deceptively tricky, but it’s also very important to get a good run through since it leads onto the first segment of a longish straight.

After Turn 3 and then underneath the bridge, the driver is confronted with an intimidatingly quick bend ahead. Some like to brake slightly on the outside curb to maximize their radius through the corner, but I believe the key to a good run through 4 is to avoid taking too much inside curb and unwind the steering as quickly as possible. Because it’s a fast corner, I’ve seen lots of people carry a bit of understeer out of the apex onto the curbs, but it’s an easy way to drop wheels. Instead, I like to turn in with a lift or a rub of the brake, get down the apex quickly and roll on the throttle early and gently. It feels a bit like you’re threading the needle when it’s done right, and I’m always able to blitz through the next section when on a neat and tidy run.

The long straight between Turns 4 and 5 goes by quickly in a powerful car, but can feel like ages in a Miata. Because 5 is fast and uphill, it invites a driver to charge in as quickly as possible with a minimum of braking at the end of the preceding straight. However, the course is slightly off-camber there, and while some sliding is inevitable around the apex, it’s important to not let the adverse camber drag the car off the track, since it almost guarantees a lost position; the section is so fast that it requires a driver to reduce their speed on the dirt.

The most technical corner at Laguna Seca is undoubtedly Turn 6. Entry is somewhat blind; coming over a crest obscures the view of the apex in everything but a Suburban, and so the driver must use their mind’s eye to draw a line and trust it to turn in seemingly early. Braking can be done on the rumble strips, which can help rotate the car slightly into the corner, but this must be done with some care. Once the car is upon the apex, the road dips and the suspension compresses, and you can floor the throttle – that compression gives you a little extra grip. That will come in handy firing you up the hill towards the Corkscrew.

Turn 7 is the right-hand kink which precedes the Corkscrew. It’s important to try and not brake while turning and ask too much of the car on entry, because there’s a big bump in the braking zone. Therefore, set the car up as far to the left as possible – dropping a wheel off the smoother part of the track for a few extra feet, turn smoothly and brake somewhat conservatively.

Now you’re upon the famous Corkscrew! Release the brakes as you turn in to put some weight on the rear – the rear will spin if you carry the brakes in too hard. Turn in and aim for the lone tree before getting on the throttle and try to be smooth with your steering inputs as you bring the car over to the right. The car can be driven quite hard off the corner, unless there’s an abundance of power.

The following corner is one of the most exciting. The downhill Turn 9 requires guts and precision to do well! Set up somewhere in the center of the track before turning. It’s important not to get too greedy here; the adverse camber can sweep a hasty approach into the dirt. Turn in early, and minimize the travel needed to get to the apex. Once at the apex, the surface flattens slightly and allows for a little more steering lock. Then boot it and sail down the hill with a well-deserved grin on your face. Try to “bend” the car at the apex, and get on the throttle smoothly to roll speed down the hill.

Turn 10 is tricky, but rewards some good entry speed. Guts count here, so get off the brake early and turn in with some gusto. This is the only corner in which the camber serves you; it feels like diving into a massive hammock. The entry is a little scary at first, but once you’re at the apex, you shouldn’t have too much trouble driving off the apex – ideally, the car is pretty straight by then.

Turn 11 is trickier than some might think. Sure, it appears to just be a hairpin left from the first gander, but it’s tough to get perfectly, and since it runs onto the front straight it needs to be done well. The trick is to not brake too late, and focus on mid-corner speed and a strong exit. This means getting off the brakes early and avoiding the brim on entry, though the inside curb is somewhat flat and can be driven over. Make sure the throttle is applied smoothly – try not to spin the wheels – and run off the edge of the road on exit if need be.

And with that, you’ll have a quickish lap at Laguna. Remember, the course goads people who run out of talent and bring sand back onto the track with them. Therefore, some caution should be exercised when running with novices, and then find the courage to brake later in Turn 2, get on the throttle early in Turn 4, enter Turn 6 blindly and confidently and exercise patience through Turn 9. With those little nuggets in your pocket, you’ll be able to impress your friends and put on a smug face when your nephew is certain he’ll cream you in the latest racing game.