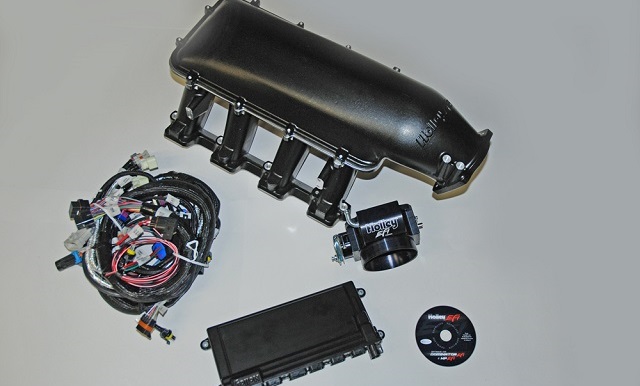 In the first issue, we examined the self-learning capability of Holley’s Dominator EFI, while in the second segment, we examined the basic setup of the system and also touched upon some of the many features found in the system. This time around we’ll dig deeper into those features:

Holley has engineered the system to function with 4, 6, 8 and 10 cylinder engines. Ignition is a simple plug-and-play with GM LS engines (non-VVT), GM HEI, Ford TFI, along with magnetic and hall effect triggers. Custom settings can be configured to allow for use with many other applications too. What this means is you can have an existing ignition setup (lets say an MSD 7AL2 box with a crank trigger).  What if your setup is distributor-less (DIS)? There are twelve channel Distributorless Ignition (DIS) outputs included and the Dominator is capable of directly driving “Smart” ignition coils or Holley DIS coils. It will also drive 2 wire coils with the addition of PN 554-112 high current coil driver module.

We touched on it before, but the Dominator can control GM’s 4L60E and big boy 4L80E electronic control transmissions. There is no need for a separate control box. With this setup, you can input things such as maximum RPM, maximum vehicle speed, enable paddle shifters, enable an auto/manual shift mode and even enable a speedometer output. There’s an easy-to-use table configuration interface that sets up the part throttle shift scale, line pressure scale, accumulator pressure scale and the torque converter lockup scale. And Holley tells us more electronically controlled transmission combinations will be made available for the Dominator box down the road.

If the engine you’re controlling has a drive-by wire throttle system, the Dominator can handle it. In fact, it is capable of handling a pair of drive by wire throttle bodies (that brings up some interesting combinations to ponder). Holley’s system is compatible with a wide range of DBW throttle bodies, including GM, Ford, Chrysler, Nissan and, of course, aftermarket units designed for those applications. With the drive by wire, you can even setup the way the EFI responds to the pedal inputs (basically throttle position versus pedal position). With this arrangement, if you prefer a softer pedal (like a typical late model passenger car), then Holley’s system can accommodate you. But if you want a sensitive racecar feel to the pedal, you can get that too.

Holley setup their EFI ECU’s so that they can use common OEM sensors. The ECU’s can also accommodate aftermarket sensors by way of a custom sensor calibration input. The Dominator has two channel knock control sensor inputs for both one or two wire knock sensors. And it also includes integrated dual channel wide band oxygen sensor controls. This allows the management system to monitor both engine banks (by way of NTK or Bosch sensors). If you’re a nitrous user or if you have a boosted application, you can appreciate how valuable this can be. We’ll get into the nitrous and boosted part of the equation down the road.

The Dominator can be setup to accommodate your choice of Speed Density, Alpha-N, Alpha-N Combination, and VE fueling strategies. Holley notes this gives you the option to select from a variety of load sensing strategies to meet the engine requirements or your personal tuning preference. Not only that, the system includes twelve sequentially driven 8:2 peak and hold injector drivers, capable of driving up to 24 low or high impedance injectors as a standard feature. As a result, you can include multiple staged injectors in your combination. The Dominator also allows for individual cylinder fuel and spark control. All of this really means you have the power to unlock the full potential of the engine combination.

The Dominator ECU is engineered with dedicated fuel and oil pressure inputs (along with an extensive range of other inputs and outputs allow for a limitless combination of options). Holley doesn’t “hard-code” system inputs and outputs on the Dominator. That means you make the choices including what you name an input or output. Holley notes the additional inputs are as follows:

30 – 0-5V Sensor Inputs – Configures any 0-5V sensor, as well as some can be used as switched high or low inputs

16 – Ground PWM Outputs – Can be configured as PWM or switched ground outputs. Rated at 2A maximum

We’re not quite done yet: The Dominator system also has three internal rev limiters (for example, one limit for staging, another on lower gear changes and another on the upper). You also have the capability to select one of four options for each rev limit: Fuel Only, Spark Only, Fuel and Spark, or Soft.

Next issue, we’ll take a closer look at how the Dominator can be configured to manage a boost application or a nitrous application along with water injection, as well as a surprise function or two. Watch for it.