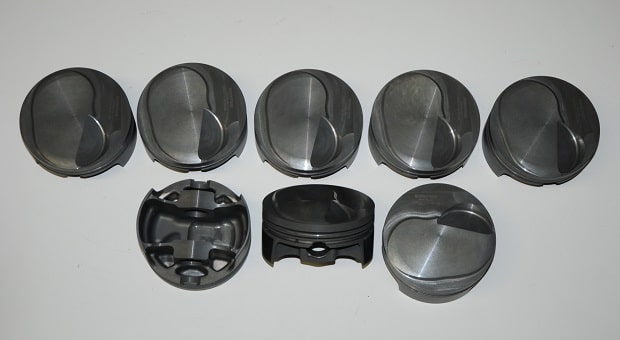 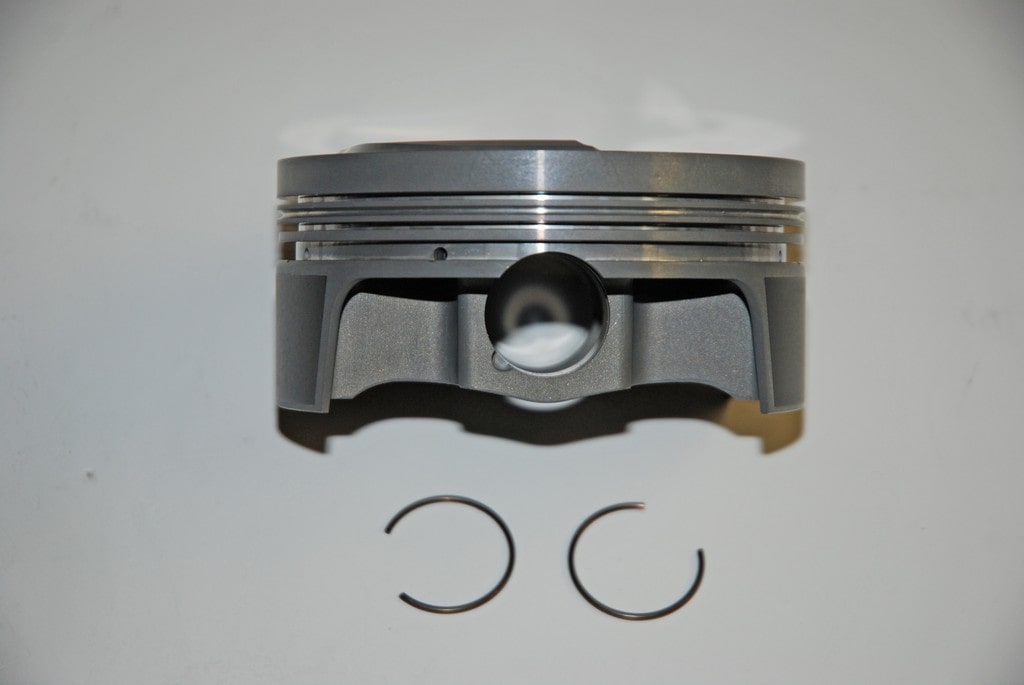 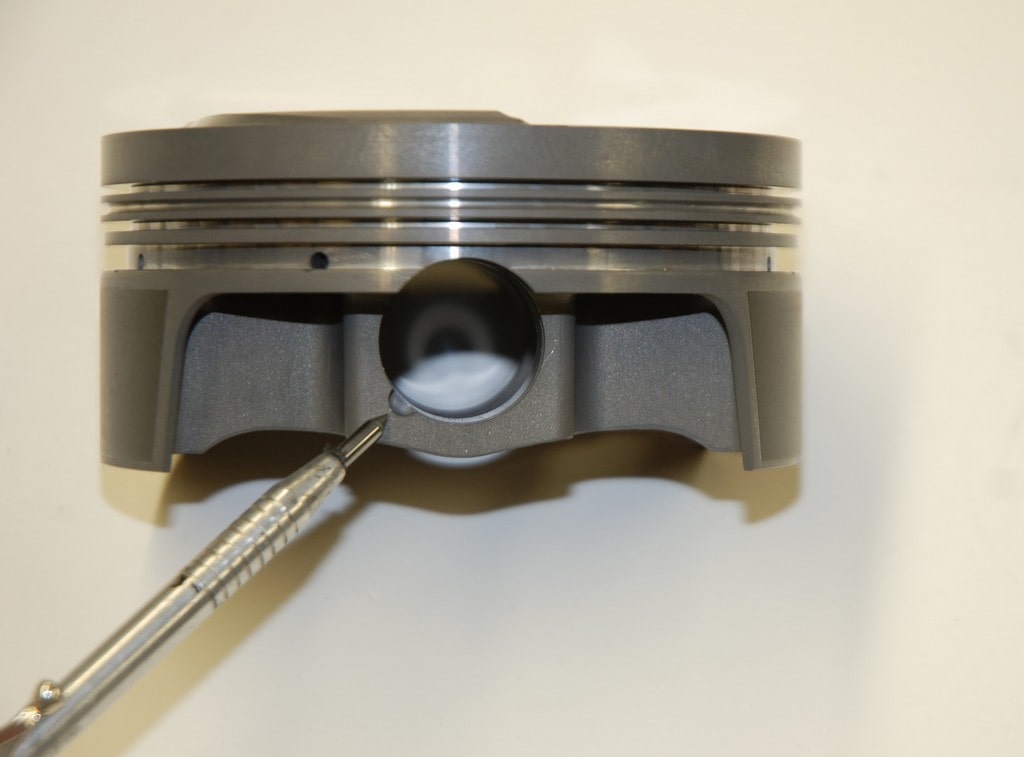 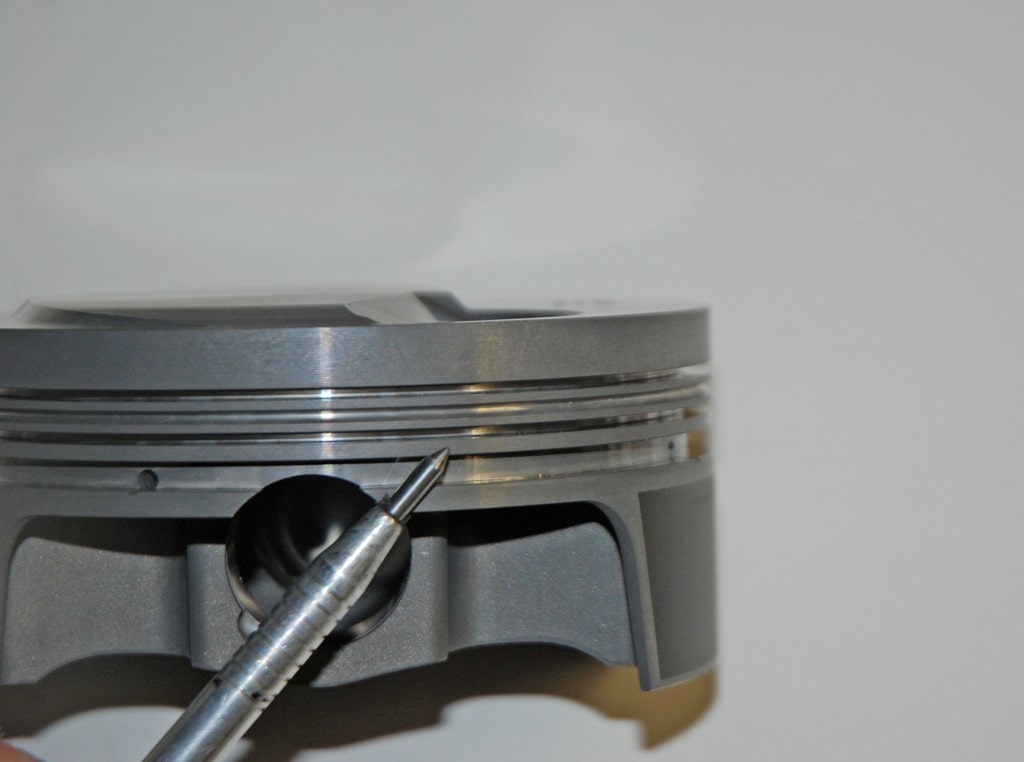 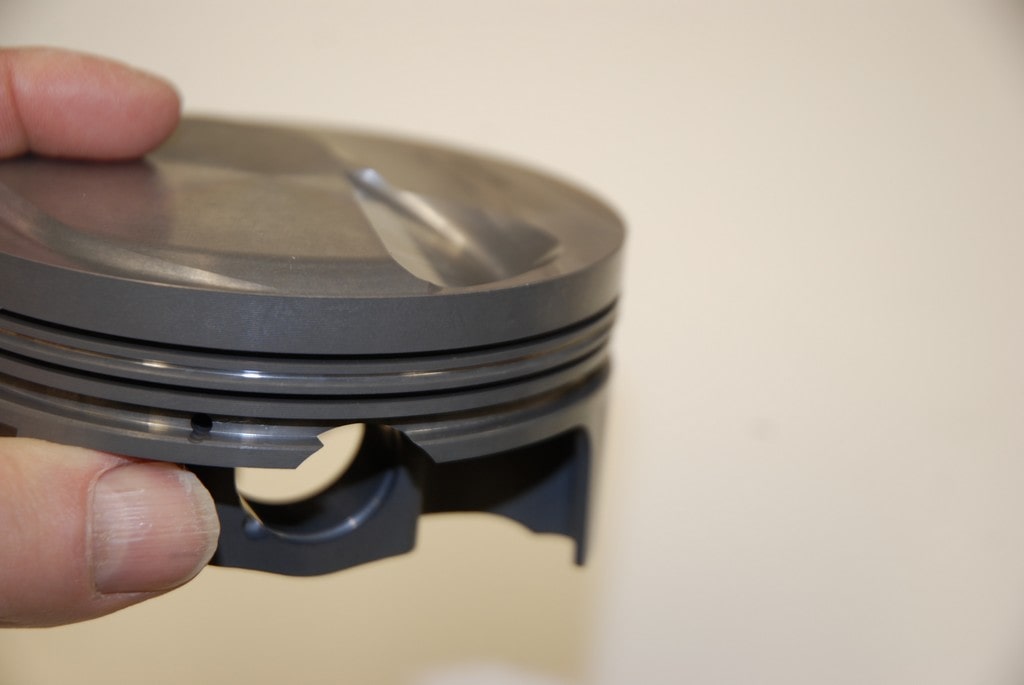 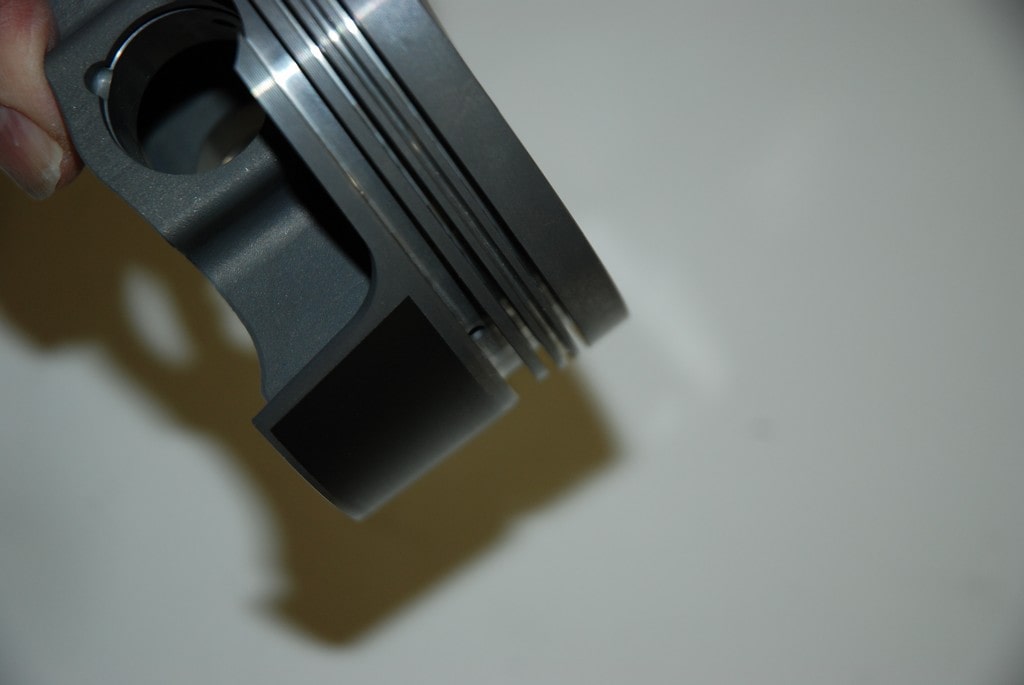 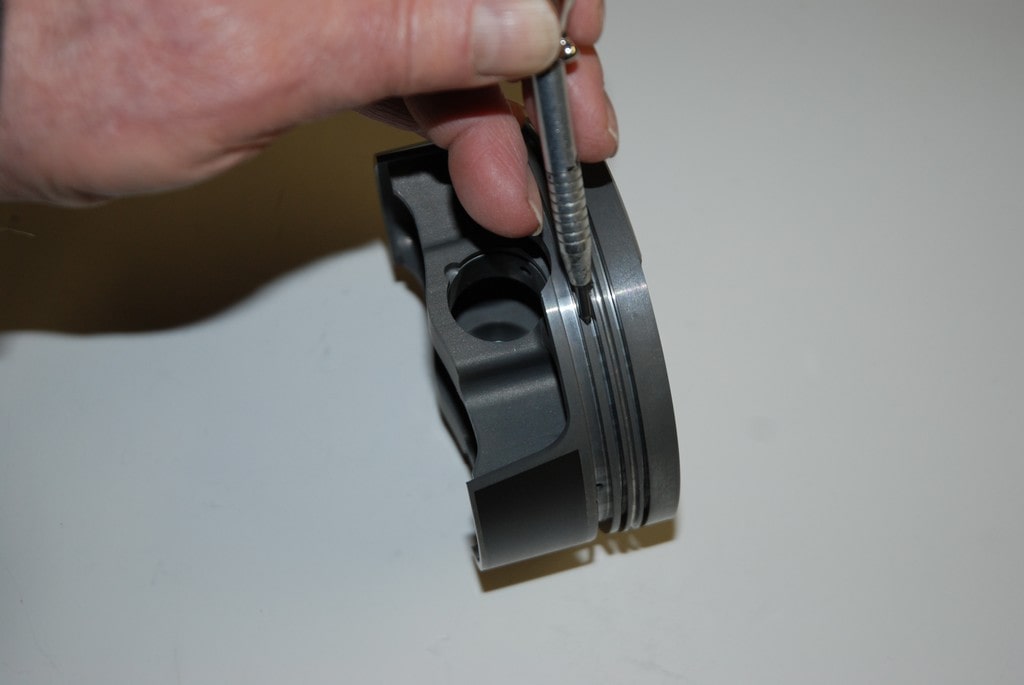 We’re back with part three (1, 2) of our huge series on pistons, featuring MAHLE Motorsports’ high tech PowerPak piston lineup. Last issue we began our look at pin bosses and pin oiling techniques. This time, we’ll look at the different ways to physically hold pins in check. We’ll also begin our examination of ring lands. There’s a huge amount of info here, again thanks to MAHLE Motorsports:

Wrist pins can be held in by two different methods – they can be pressed into place or left floating (with various lock arrangements). A pressed pin (sometimes called a "locked-in-rod" pin) is self-explanatory. The piston, wrist pin and connecting rod are assembled with heat and a press. Basically, the pin can't move because of the interference fit in the connecting rod. It works well, but if your application requires teardowns, as in most high performance cars and/or racecars, it's a pain to take the rod-pin-piston package to a machine shop for disassembly and re-assembly. One thing to remember, though is the fact that there is virtually no horsepower loss when you use pressed pins.

On the other hand, floating wrist pins are more convenient, but they always add another problem: The pin locks MUST stay in place until you decide to remove them. Otherwise, you'll have major carnage inside your engine. Typically, performance pistons are machined for one of four possible pin lock systems: Tru-Arcs, spiral locks, round wire retainers or buttons. Pin buttons are the least common, and in most cases, they're only found on fuel and blown alcohol drag race engine combinations. Performance pistons will sometimes feature Tru-Arc retention. Tru-Arcs are basically circlip devices that can easily be installed with a pair of snap ring pliers, and they were common a few decades ago. Spiral locks or round wire retainers are another matter entirely. Both configurations are basically a spiral clip that is wound into the retainer groove. It is almost impossible for something like a round wire retainer to back out in a running engine, but it is also more difficult to remove when you're working on the powerplant (there are special tools available). MAHLE Motorsports has an online video tutorial showing how to install and remove round wire retainers, and it’s most definitely worth a look:

Finally, MAHLE points out you that should never reuse pin retainers. The retainers lose tension every time you compress them. It's always a good idea to purchase your new retainers from the piston manufacturer rather than a third party.

The most common piston arrangement uses three rings - compression, second and oil. Two ring combinations (compression and oil) have seen success in drag racing, but for cars that see street use, they're the exception rather than the rule. The majority of MAHLE Motorsport pistons have ovality, and most have taper and/or profile shape cut into the ring lands. The overall diameter of the ring land is smaller than the overall diameter of the piston, and in many cases, there is a small vertical taper present (see previous section on skirts). There's a reason for this size differential: As the piston reaches top dead center, it "rocks" in the bore. If the ring land is the same diameter as the skirt, the rings would be required to handle the thrust load (which they really don't like to do). Instead, that job is left to the skirt. MAHLE notes another reason for the size differential is that the lands see more heat from combustion and, therefore, more expansion.

You'll often hear another term when talking about ring grooves, and that's "tilt." In some pistons, the actual ring grooves should have a positive tilt. This machining operation tilts the ring package upwards by a very small amount (in this sort of piston, the tilt is in the area of 2 to 3 ten-thousandths of an inch). In some applications, the tilt or “inclination” is important in that it helps the ring seating. Ring groove tilt/inclination is not purposefully machined into PowerPak pistons. MAHLE has the ability to machine inclination into the grooves, but it is not a feature on PowerPak pistons.

When it comes to ring lands, there's more too: The location of the ring grooves is often dictated by the compression height of the piston, the diameter and depth of the valve notches and (as you might expect) by the overall dimensions of the ring package. The intended application also has an effect: Most Detroit-built engines have the top ring 0.300-0.400-inch down from the deck surface. In an endurance racing engine, the top ring is typically 0.125-0.150-inch down, while heavily modified race engines (for example, a drag race Pro Stock application) can vary from 0.060-0.100-inch down from the deck (although 0.060-inch is likely cutting things close). Moving the top ring closer to the piston deck offers a number of advantages, not the least of which is minimizing the "dead air" space between the top ring land and the deck. As this space is reduced by moving the ring up, the amount of trapped combustion gasses is also reduced. In the end, the combustion process is cleaned up considerably when the rings are moved upward. Horsepower increases.

That’s not the end of it when it comes to the ring location: You should also consider how much piston material is between the rings. While the location of the second ring isn't as critical as the distance from the deck to the top ring, it is important. The second ring doesn't see temperatures anywhere close to those encountered by the top ring, but the land between the top two rings must also support the combustion pressure exerted upon the top ring. Because of this, the width of the second land area is usually between 0.150-0.180-inch in a high performance piston and greater in a stock application. As far as the land area between the second and third ring is concerned, many high performance and race pistons incorporate a width of between 0.070-0.125-inch. This is narrower than the second land, but keep in mind that combustion pressures aren't present and overall temperatures are much lower. This is also a good time to mention that some pistons have "stepped" lands. This simply means that the land area between the top and second rings is slightly smaller in diameter than the area between the second and oil rings.

We’ve run out of room for this segment. Next time around, we’ll wrap up our piston series with more info on ring grooves and ring seal. Meanwhile, check out the accompanying photos and captions. There’s a ton of information here.
High performance and race pistons are typically machined for one of four possible pin lock systems: Tru-Arcs, spiral locks, round wire retainers or buttons. MAHLE Motorsports uses what is likely the most secure of the bunch: a round wire retainer.
MAHLE Motorsports pistons are machined with a small notch on the outside of the pin bore. This allows you to start (and remove) a round wire retainer. See the text and the video link for more info.
In a high quality piston such as this, the overall diameter of the ring land is smaller than the overall diameter of the piston, and in many cases, there is a small vertical taper present.
The location of the ring grooves is often dictated by the compression height of the piston, the diameter and depth of the valve notches and (as you might expect) by the overall dimensions of the ring package.
The second ring doesn't see temperatures anywhere close to those encountered by the top ring, but the land between the top two rings must also support the combustion pressure exerted upon the top ring. As a result, it can’t become too small.
The land area between the second and third ring is typically narrower than the distance between the first and second lands. The reason it can be smaller is because combustion pressures aren't present and overall temperatures are much lower.
Back to Post