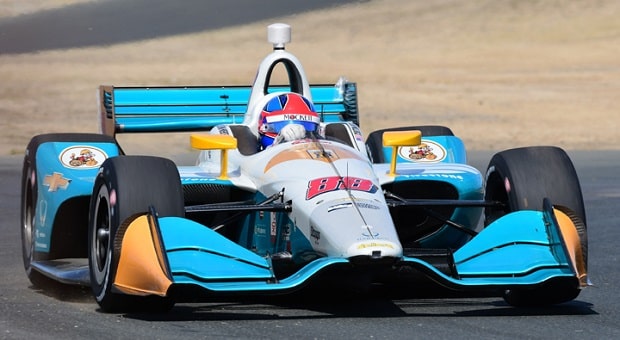 Harding Steinbrenner Racing, which started in 2017 as a single-car entry at the Indianapolis 500 with Gabby Chaves at the controls of a Harding Racing-entered Chevrolet-powered Indy car, will switch brands for the upcoming 2019 IndyCar Series.

Now a two-car entry, and with new co-owner George Michael Steinbrenner IV and drivers Colton Herta and Patricio O’Ward, the squad has decided to put Honda engines in their two Indy cars for the coming season. According to team president Brian Barnhart, “Our direction as a race team closely aligns with Honda for the near future. Therefore, we will be making a change to Honda and Honda Performance Development (HPD) engines.

“Harding Steinbrenner Racing is very appreciative of our relationship with Chevrolet in 2017 and 2018,” Barnhart continued. After working with Chaves from the team’s inception, Harding Racing used a variety of drivers in the latter half of last season before aligning with Steinbrenner, Herta and O’Ward, graduates of INDYCAR’s Mazda Road to Indy ladder system.

The Indy Lights champion and runner-up competed with Harding Racing at the Verizon IndyCar Series season finale on the Sonoma Raceway road course, where O’Ward qualified in the Firestone Fast Six and led the team to its season-best finish of ninth. Harding Steinbrenner Racing launched shortly thereafter.

“We’re excited about Honda’s emphasis on the development of young talent and, with our announcement of Colton Herta and Patricio O’Ward joining our team next year, it’s a natural fit,” Barnhart said.

“Thank you to Chevrolet for being a great partner in 2017 and 2018 for Harding Racing,” said Mike Harding. “As we move towards the 2019 IndyCar Series season with two rookie drivers, I’m glad go know Honda is as committed as I am to develop this young talent.”

Honda achieved the Manufacturers title in 2018 before the finale and won the bulk of the season’s races. Honda and HPD joined the series in 2003, and was the sole engine supplier until Chevrolet rejoined INDYCAR in 2012.

Steinbrenner, the youngest team owner in the series, is “excited to move forward as a new owner and to be joining the Honda INDYCAR family. Honda has meant a lot to the IndyCar series for as long as I can remember and I’m excited got have such a prestigious name join us for the 2019 season.”

Herta grew up and currently lives in Santa Clarita, five minutes from where HPD has its headquarters. “I go cycling with a lot of the guys that work there, so to join the Honda family is really cool,” he said.

“Honda was a big powerhouse within the paddock this year; I am very happy to be a part of the team and I’m looking forward to delivering the results that they deserve,” O’Ward added.