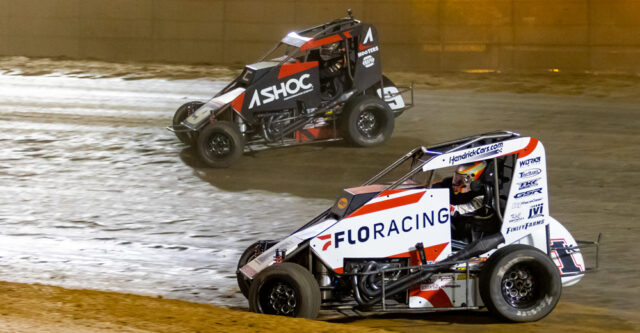 The 80th annual ARP Turkey Night Grand Prix took place this year, after being suspended for the 2020 running due to the Coronavirus pandemic. But there were changes for the 98-lap event at Ventura Raceway. in Southern California. Normally held on Thanksgiving night, this year the Turkey Night National Midget extravaganza, the USAC National Midget season closer, occurred on Saturday night, November 27th.

Turkey Night promoters J.C. Agajanian Jr., Cary Agajanian and Ventura Raceway’s Jim Naylor had been mulling the date change for several years and decided, with the off-year, this date change would make sense in 2021. “For the last 20 years, we’ve discussed moving the event [date],” J.C. Jr. said. “Things change, families change, and we wanted to continue the tradition of it being held on Thursday night. But once the virus came through, we discussed it with Jim Naylor and decided, if we were going to move the event, this would be the year to do it.” The date change, the promoters figured, might bring more local talent to the race and add to attendance.

A 50-car entry agreed, with many local racers and sponsors on-hand, along with two previous winners of this prestigious race. The entries included reigning 2021 NASCAR Cup Series champion Kyle Larson, who was recently feted in his Elk Grove, Calif. hometown after earning his first NASCAR premier series title. Larson earned the Turkey Night Grand Prix (TNGP) title on three Thanksgiving nights, with the two most recent coming at Ventura in 2016 and 2019. He scored his first TNGP in 2012 at Perris, Calif.

Automotive Racing Products (ARP), which has its offices in Ventura, was the title sponsor of this 80th running of the Turkey Night Grand Prix. They added $15,000 to the event purse from top-to-bottom for the $10,000-to-win USAC NOS Energy Drink Midget National Championship event at Ventura Saturday night.

For the first time in the event’s long history, a woman earned pole position for Saturday’s feature event, when Kaylee Bryson of Muskogee, Okla. was the quickest qualifier and her teammate, Taylor Reimer of Bixby, Okla. qualified second, the first time in USAC National Midget history that two women qualified on the front row together.

Bryson would lead the initial 17 laps, the first ever for a woman to lead this race. Behind this duo, Logan Seavey was lurking, after qualifying ninth for the 28-car feature. Before the first caution on the 15th lap, he’d surged to third place and, after the red, he advanced to second on the 17th lap then swung around the outside for the race lead as the 18th lap took place.

Seavey would go on to win the race after a nearly session-long battle with newly crowned USAC NOS Energy Drink National Midget champion Buddy Kofoid, as the two swapped the lead from the 18th lap through to the 98th-lap checkered flags. In fact, Seavey would lead the most laps en route to victory in this prestigious contest, while Mitchel Moles took third and Larson was fourth, with Bryson taking fifth. Justin Grant, Ryan Bernal, Reimer, Tanner Thorson and Zeb Wise rounding out the top 10.

After a lap 50 caution, Seavey would take a lead he’d never relinquish after his tough battle with Kofoid. “I kind of knew, early on, that the rubber was coming, and I was just charging really hard to get to the front,” Seavey said. “As soon as I got to the lead, it was full save. For me,” he mused, “it was just like Silver Crown racing where you get to the lead and try to hold on for the rest of the race. That experience probably helped me a lot right there. I was able to get back by Buddy in lapped traffic and I saw him move down, so I knew he was feeling something on the bottom. As soon as I went by him, I went straight back to the bottom, and I wasn’t moving after that,” the winner said.

About Anne Proffit 980 Articles
Anne Proffit traces her love of racing - in particular drag racing - to her childhood days in Philadelphia, where Atco Dragway, Englishtown and Maple Grove Raceway were destinations just made for her. As a diversion, she was the first editor of IMSA’s Arrow newsletter, and now writes about and photographs sports cars, Indy cars, Formula 1, MotoGP, NASCAR, Formula Drift, Red Bull Global Rallycross - in addition to her first love of NHRA drag racing. A specialty is a particular admiration for the people that build and tune drag racing engines.