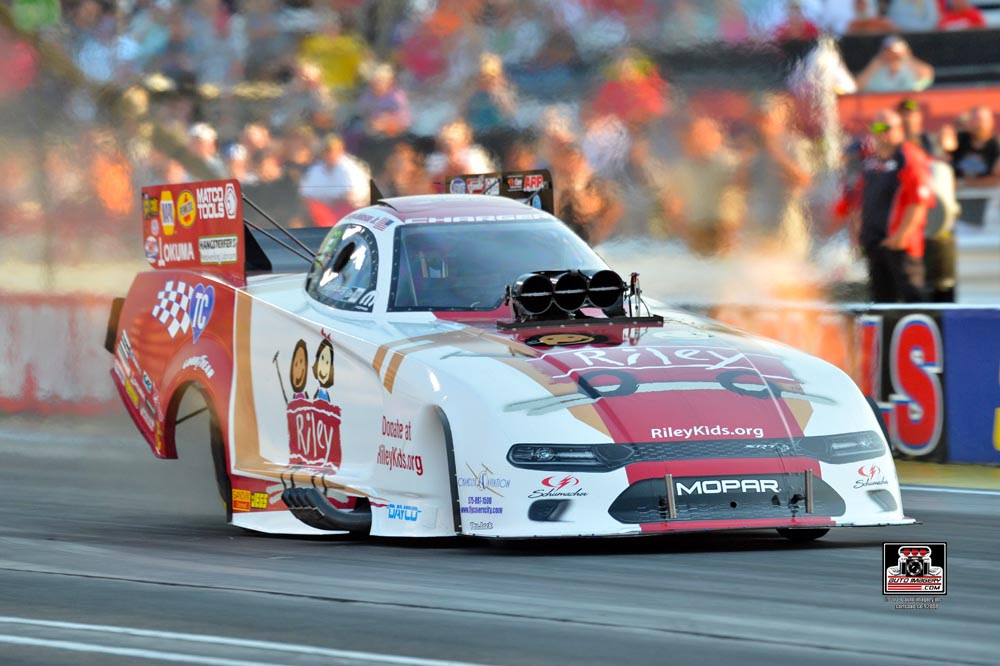 One of the most highly-anticipated traditions each year at Don Schumacher Racing is the annual Open House to benefit Riley Children’s Foundation. Since 2006, drag racing’s winningest organization has opened up its doors on Friday of the NHRA U.S. Nationals week to provide thousands of fans a behind-the-scenes glimpse into the racing powerhouse’s 145,000-square-foot Brownsburg, Ind. headquarters. Due to the ongoing global COVID-19 pandemic, the 2020 Open House has been canceled, but DSR remains committed to raising funds for its hometown children’s hospital, and is launching a series of virtual fundraisers surrounding the upcoming Labor Day weekend NHRA event.

Starting us off strong is a teamwide Cameo campaign, in which DSR’s roster of eight Mello Yello series drivers are available via the Cameo app or Cameo.com for special shout-outs. DSR drivers are available to send congratulatory messages, birthday wishes, words of encouragement, or to simply just say ‘hello’ to an adoring fan via a Cameo video. Cameo messages can be purchased for fifty dollars ($50 for Web and Android; $54.99 for IOS users), with 75 percent of the proceeds going towards Riley Children’s Foundation (Cameo retains the remaining 25%). The Cameo campaign begins today, August 20, and will run through Thursday, September 3, at 5:00 p.m. ET.

Another way DSR plans to add to its running total of more than $716,000 dollars raised for Riley is through auctioning off highly-coveted racing memorabilia and gift items. Highlighting the items up for grabs are an autographed Matco Tools Jamestown Cart, a metal Cold Hard Art starting line Christmas Tree, Goodyear tires, a Leah Pruett Dodge SRT Hellcat Redeye diecast, an autographed Impact Racing helmet, and autographed DSR crew shirts. Auction items are available online from August 31 – September 7 at DSR2020.givesmart.com, or trackside at Lucas Oil Raceway at Indianapolis during the NHRA U.S. Nationals, September 4 – 6.

One of the featured auction items is a special Zoom event with DSR drivers. By selecting the ‘Buy it Now’ option via the GiveSmart site, fans can purchase their entry into one of two Zoom meetings. A Zoom meet-and-greet with DSR’s Top Fuel drivers (Antron Brown, Cory McClenathan, Leah Pruett and Tony Schumacher) will be held on Friday, September 4 from 12:00 p.m. – 12:30 p.m. ET, and the Funny Car Zoom call featuring Jack Beckman, Ron Capps, Matt Hagan, and Tommy Johnson Jr. will occur that same day from 1:00 p.m. – 1:30 p.m. ET. The Zoom meeting access can be purchased for $100 starting August 27. Space is limited and will be available on a first come, first serve basis. For those who would simply like to contribute a monetary gift, donations can be made by texting DSR2020 to 76278 or visiting the GiveSmart site. DSR will also have donation buckets available at its trackside hospitality pavilions during the U.S. Nationals. A special mystery prize will be awarded to any supporter who makes a monetary donation, Zoom, or auction item purchase of $500 or more.

Each year one of the biggest draws to the Open House is the massive car show hosted by the Indy Hi-Winders, which draws thousands of car and motorcycle enthusiasts from around the country. While an in-person car show is not feasible at this time, a safe, socially-distanced car show will be hosted virtually. The free car show will take place on DSR’s Facebook page on September 4 at 9:00 a.m. ET.

It’s hard to picture the on-track action at the U.S. Nationals and not think of the beloved Riley Kids race car. Since 2014, Tommy Johnson Jr. has piloted the Riley Kids Dodge Charger Funny Car, and this year is no exception. Riley Kids and their families will be well-represented on the race track as Johnson, the current Mello Yello Funny Car point leader, will seek to claim his second victory of the 2020 season. Fans that are not able to join DSR trackside are encouraged to tune-in to the NHRA on FOX broadcast and cheer on the Riley Kids car. TV coverage is scheduled for Sunday, September 6 from 11:00 a.m. – 1:00 p.m. ET on FS1, and from 1:00 – 4:00 p.m. ET on FOX.