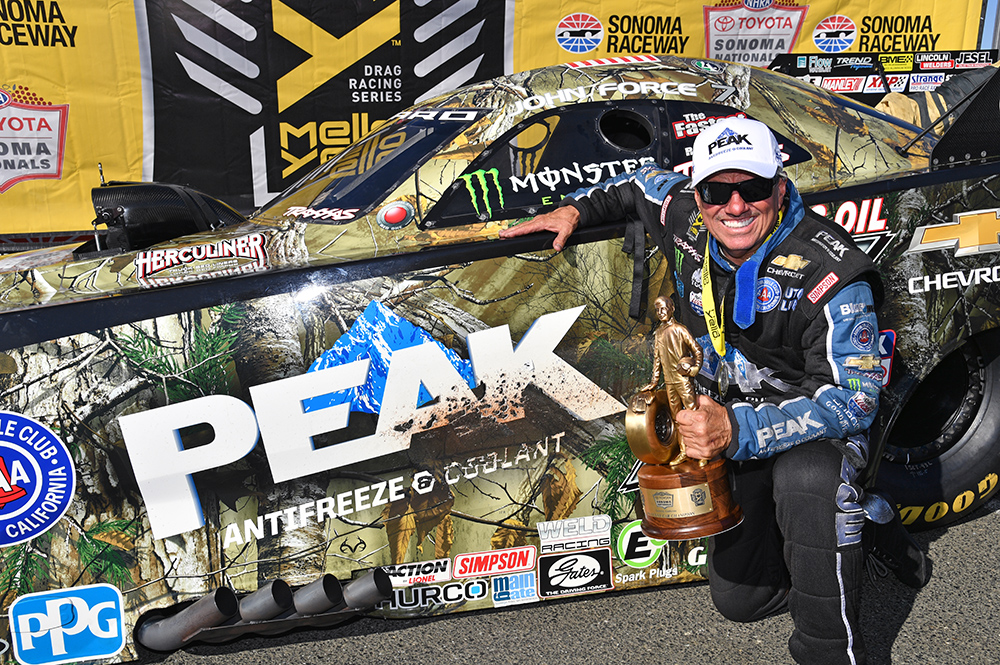 Heading into the final race of the 2016 NHRA Western Swing, the 29th annual ProtectTheHarvest.com NHRA Northwest Nationals, John Force, driver of the PEAK Antifreeze & Coolant Chevrolet Camaro SS Funny Car, answered a few questions about his chances of sweeping the swing for a second time and also how his season has turned around.

You have had peaks and valleys in your long career, but how satisfying is this two race stretch? Where does it rank in your career?

FORCE: It is exciting. With new sponsorship like PEAK Antifreeze and Chevrolet and the people like Lucas Oil and the old ones like Auto Club and all of them that have stayed by me in our hard times. You know I cried a lot about hard times but it takes money to make this game. I’m working with the right people, like Mike Neff and Alan Johnson who are in charge of my Funny Car and Top Fuel programs. Mentally it helps to work with my president Robert Hight as we put the band back together so to speak and it is starting to show, it is starting to turn the corner. In our races too, luck is a big part of the game. Robert Hight was right there with me in the Auto Club Chevy and he dropped a cylinder and I got the win. If you look at the last two weekends the cars have gone out, Robert and Courtney (Force) are because of me. We all have the same tune-up and we are all helping each other. Its hurts us, but helps me, but in the end we are all part of the same team.

You have talked about having a crew of younger mechanics. How do you make sure they are level and hungry going into Seattle?

FORCE: The biggest deal is that my crew chief Jon Schaffer, along with Nick Casertano are very important, they manage those guys and we talked about it. Let the crew have a dinner, have some drinks on Sunday but the preparation they make at these tracks is what will make us try to win the sweep in Seattle. And that is what we said after Denver going into Sonoma, keep a lid on them. The road is tough on these kids and I have a young team. We have seen mistakes like any team out here but we have addressed it. We will be ready for Seattle with them. 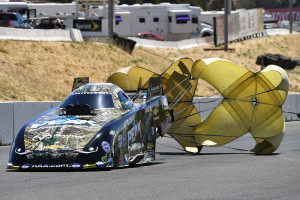 What are your chances going into the weekend?

FORCE: If we can run like we did in Denver, we thought we would stick with the pace and everyone appeared to be off a bit, but (Del) Worsham was right there with us. Our cars were pretty consistent and as you have noticed the past year we have been playing catch-up. I had a meeting with our team Saturday night (in Sonoma) and told them after qualifying last year and I had a knot in my stomach because those guys were running 80’s and we weren’t’ even in their zip code. We had to go to work. We knew what had to be done, we knew where we were going, and that is what we worked on for the last year. You have to look at we put the big clutch in over a year ago and it helped. We were short on money, short on testing and we’ve always had the heart to go after a championship but anytime we want to test, now is when we do it. We tested all last year and now it is starting to pay off.
I can’t make a call on the Swing. I’m going in with three Funny Cars that is going to try to defend it and if any of us get a win, the win is what is crucial. Do I want to get the Swing? Without a doubt. I talked with Austin Coil this morning and he was congratulating me. Said I drove like I drive 20 years ago when we started beating them and when we were first winning. He can see it because he taught me. Now I got a young generation, Mike Neff teaching me things. I’m so bullheaded when I drive. I was hurting myself there for a while with that new Chevy. I wasn’t believing it was me not lining up straight. I said I don’t care if it crooked, I will drive out of it. When the car washes out I will fix it. Nobody tells me. Lanny (Miglizzi, track specialist) he came to me and said Neff and Schaffer were right and asked if I could look at the track marks on the ground and said you used to be a machine and now you are a little screwed up here. Boy it opened my eyes. I said we are going straight to Indy, get the race track and we are going to get a sight. Kelly Antonelli and Guido Antonelli know I always wear a St. Christopher medal and I used to have them on my car, painted on the side. They put a big St. Christopher medal, they had the machine shop at Indy build a thing to hold it and put it right out there. Now I have a sight to line ‘em up. Now I got that ol’ camouflaged Realtree, I was supposed to be running PEAK blue but the body was coming apart that we already crashed. We fixed it twice and it just keeps coming apart and I can’t run it. We got a new body and trying to get it mounted because we are just starting to get bodies in. So I got to talk to PEAK since Realtree was a one race deal, even though they are a partner to ours, but now I have to run it in Seattle. These things have a little magic sometime. My chances to win the Swing? As good as anybody else’s. I like Seattle, good air, good race track. The fans are great, let’s see if we can go give them a show. That is what we are trying to do. I want to win championships. People are saying when you get on the podium or an interview why do you bring Ron Capps into the interview and how come you don’t talk about you winning. Because first off, the minute you go open your mouth Ron Capps will knock you off. What I’m trying to do is grow the sport. He is a future driver. When I was his age I was getting into my run of being good. He is a champion to me. I have my work cut out to me to grow the sport and the opportunity to take advantage of it. We have to grow the sport with FOX, take it to the next level, and our race teams. We had a sellout crowd on Sunday in Sonoma.

It has been since 1994 since we have had a Funny Car racer to win the swing. How hard is it for anyone to do it?

FORCE: It doesn’t matter how good you are. How much you are out running the pack. I am not outrunning the pack I am running with it. The Worshams are right there and so are all of the Schumacher teams. My daughter Courtney is out running me every week just like Robert Hight. It is the toughest Funny Car pack I have ever seen. To win the Swing a lot comes into play. The pressure comes in from the media and the fans. Then you can’t let your mindset change. You have to be able to run with the pack. Keep your mindset right and you need destiny.
This weekend Courtney and Brittany locked into Countdown how important was that to the JFR team?
FORCE: It was important to me because Monster Energy pays big money. We invested in Alan Johnson, Brian Husen and Jason McCulloch to put together a great team. Very important. Very key to stay focused but I need Courtney with Traxxas and Brittany with Monster Energy. I am really proud of them getting into the Countdown. They deserve it. They have worked hard all season.