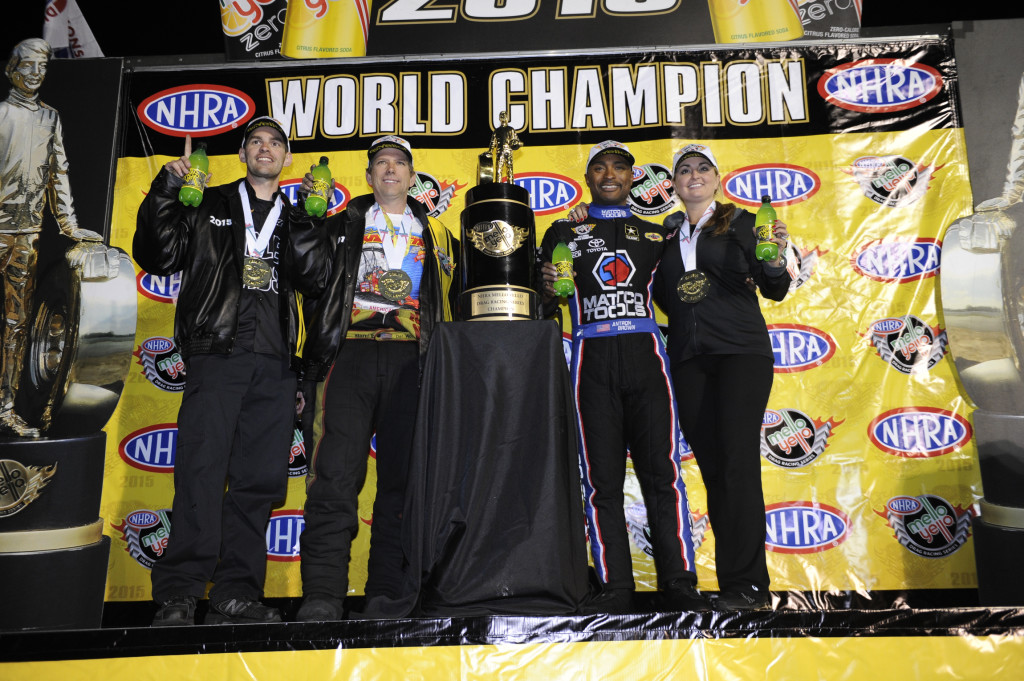 Del Worsham can finally relax after winning his first NHRA Mello Yello Funny Car championship, taking down Jack Beckman in the semi-finals and Tommy Johnson, Jr. in the finals to end the season like a champion at the Auto Club NHRA Finals at Pomona Raceway.

The Kalitta Motorsports DHL team honored Scott Kalitta’s legendary accomplishments with two Top Fuel titles in 1994-45 and his memory escalated them to the team’s first championship since his untimely passing in 2006 at Englishtown.

Top Fuel’s Shawn Langdon made it a clean sweep in Top Fuel, winning the NHRA Finals and the season-opening Winternationals at Pomona, beating a defiant Antron Brown in a very close finale to the season. 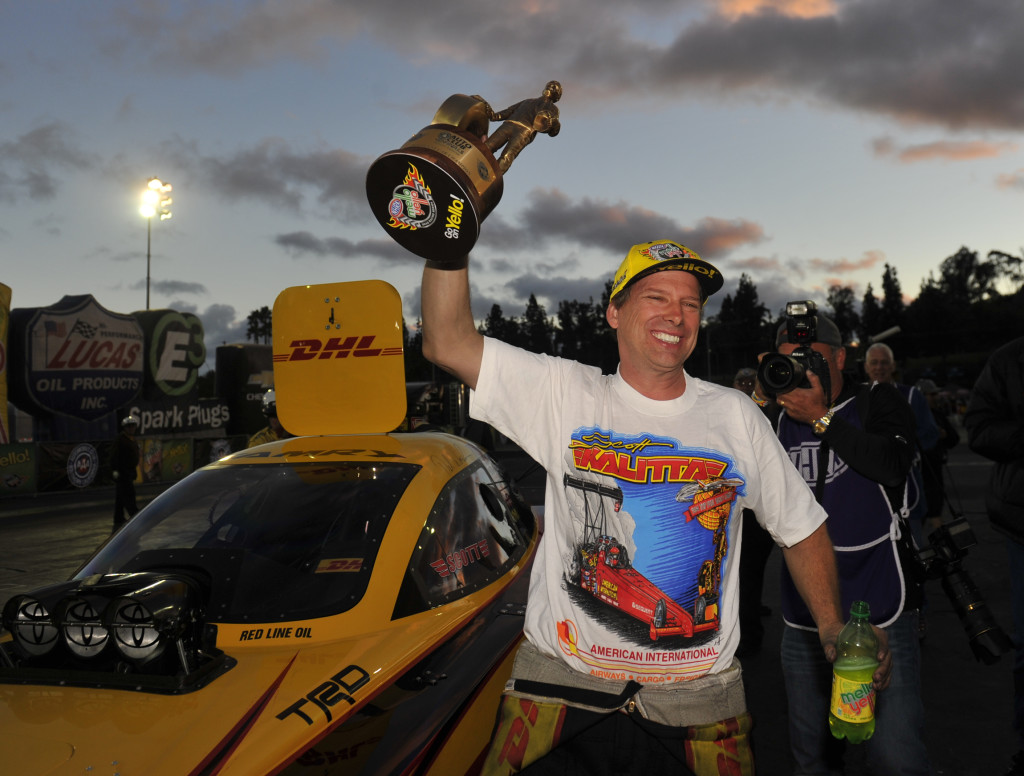 The chase in the Funny Car Countdown to the Championship came to a conclusion with Del Worsham getting his first championship in that category, adding to his 2011 Top Fuel title. This now places him in a very elite group, joining Gary Scelzi and legend Kenny Bernstein as the only NHRA drivers to win championships in both Funny Car and Top Fuel.

“It is an amazing feeling,” beamed Worsham.  “I have been here before, not that did me any good up there today.  It felt like it was 25 years ago, and I was making my first run.  The team has been behind me, regardless of the situation.  We are racing for Scott, Connie and the entire Kalitta Motorsports family.  Nicky Boninfante, Jon Oberhofer, Dave Boyer and the entire DHL team, the job they have done has been incredible. They have not made a mistake since September.”

Known as the best car that hadn’t won in 2015, Worsham worked his way to the top by winning four of the six races in the Countdown, bringing Toyota the first championship since 2008 when Gary Scelzi did it first. 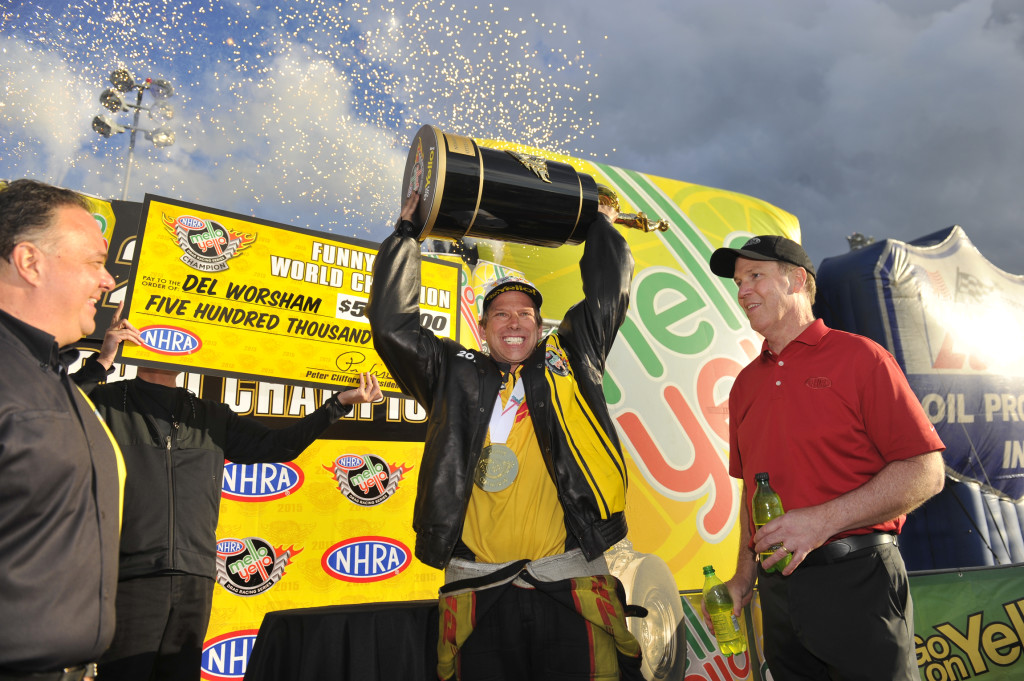 “Everytime I get inside this DHL Toyota Camry I see his [Scott Kalitta’s] name.  I hop in and think about Scott, and his sons: Colin and Corey,” said Worsham winning his 13th race in Funny Car and 38th overall.

Worsham’s day began with taking out Tony Pedregon and later Robert Hight, setting up the matchup of the year between Beckman and Worsham with the winner taking home the champion’s trophy.

Beckman had already reset the National Elapsed Time Record, lowering it to 3.884 seconds and had the 20 points bonus in reserve, but it wasn’t needed.

In the most anticipated race of the weekend, Worsham peeled out in the semifinals, leaving Beckman in his wake and running at time of 3.920 seconds, 327.35 mph after Beckman suffered tire shake that led to him having to back pedal to no avail, ending his season. 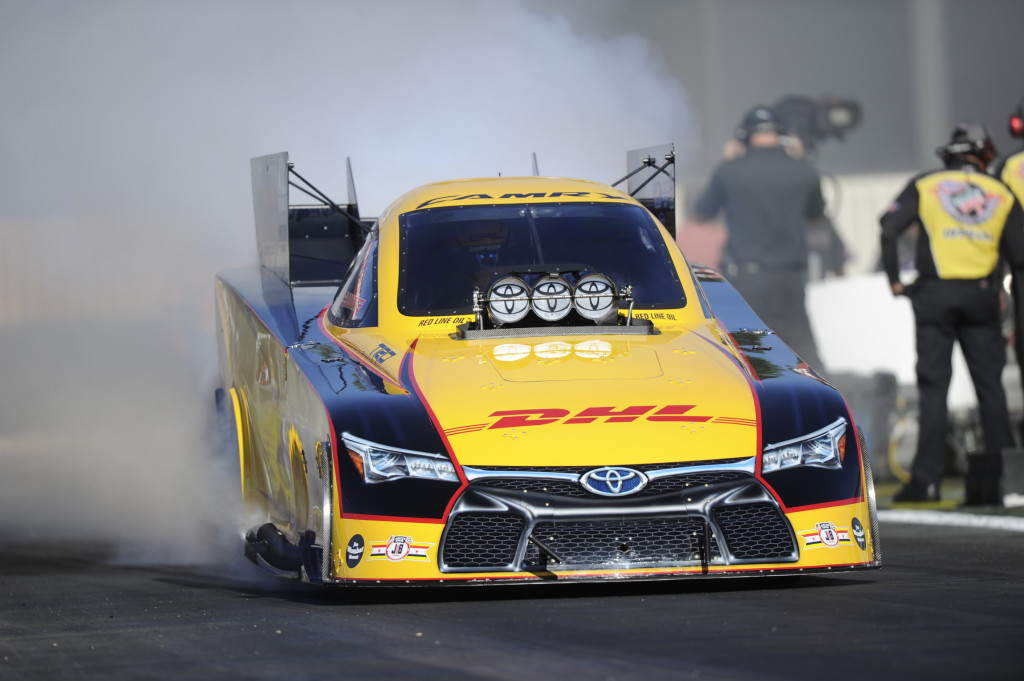 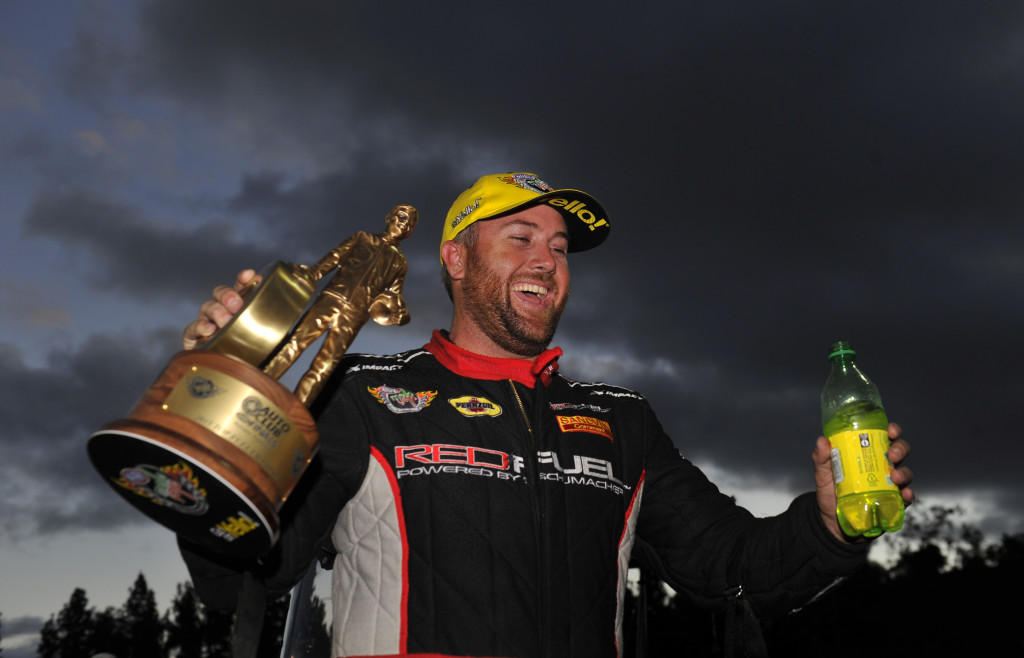 Hometown hero and local southern Californian, Shawn Langdon, finds the Auto Club Raceway at Pomona to be a special place.  It was the site of his first major drag race with his dad, where he won the Junior dragster title in 1997, became Super Comp champion in 2007, and in 2013 was crowed Top Fuel champion.

On Sunday, Langdon book-ended the year, kicking it off by winning the season opening Winternationals and winning again on Sunday for his only two wins of the season.  The twist, however is that Langdon won in February driving for Alan Johnson Racing and returned to the winner’s circle in November piloting the Don Schumacher dragster.

It wasn’t an easy road for the Mira Loma, Ca. native to get to the top of the elimination ladder, winning on a slight hole shot over Larry Dixon first round and then Clay Millican in the quarterfinals setting up a great matchup with Doug Kalitta.  Langdon just lengthened his distance, driving around Kalitta and taking the win with his time 3.763 seconds to Kalitta’s pass of 3.781 seconds.

“I love this track,” Shawn said.  “This track has always kind of had a special place in my heart just because I grew up around the corner from here.  As a kid, I was always out here watching my heroes race.  I started my junior dragster career out there, raced a lot of sportsman classes.  So many great memories out at this racetrack.

“Fortunately it just makes it that much sweeter that I’ve luckily had a good career here and with all of my friends and family that come out, it makes it sweet.  It’s just a great opportunity and I have to thank Don Schumacher for giving me an opportunity that he didn’t have to.  They gave me a great race car today.” 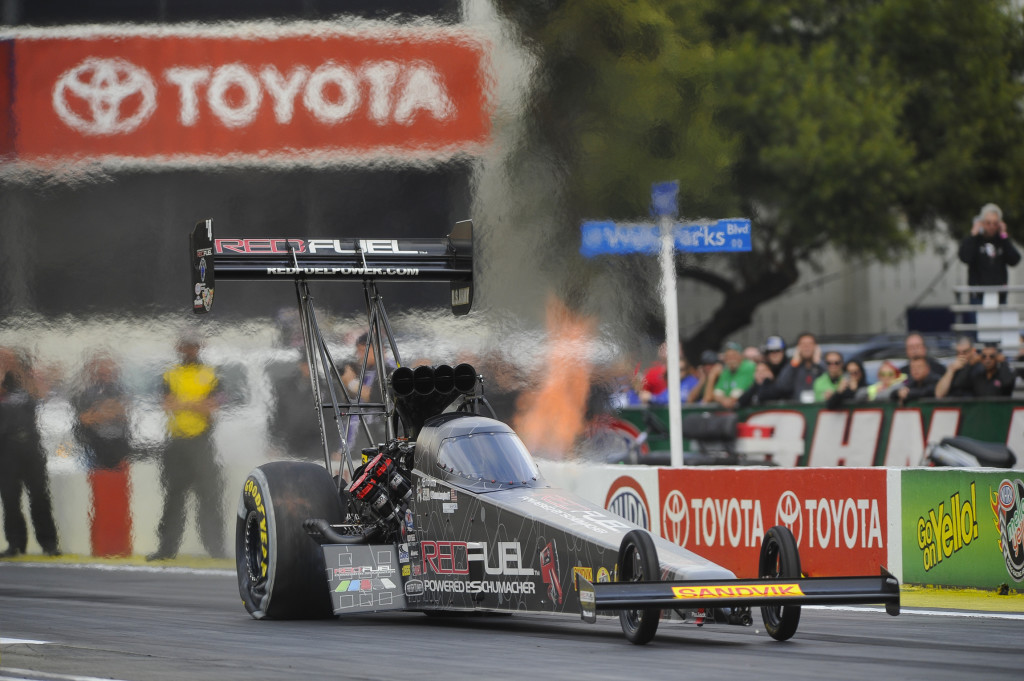 Langdon will finish the season in sixth place.  Antron Brown stretched out his NHRA Championship lead to 231 points over Tony Schumacher with Richie Crampton grabbing third at Pomona. 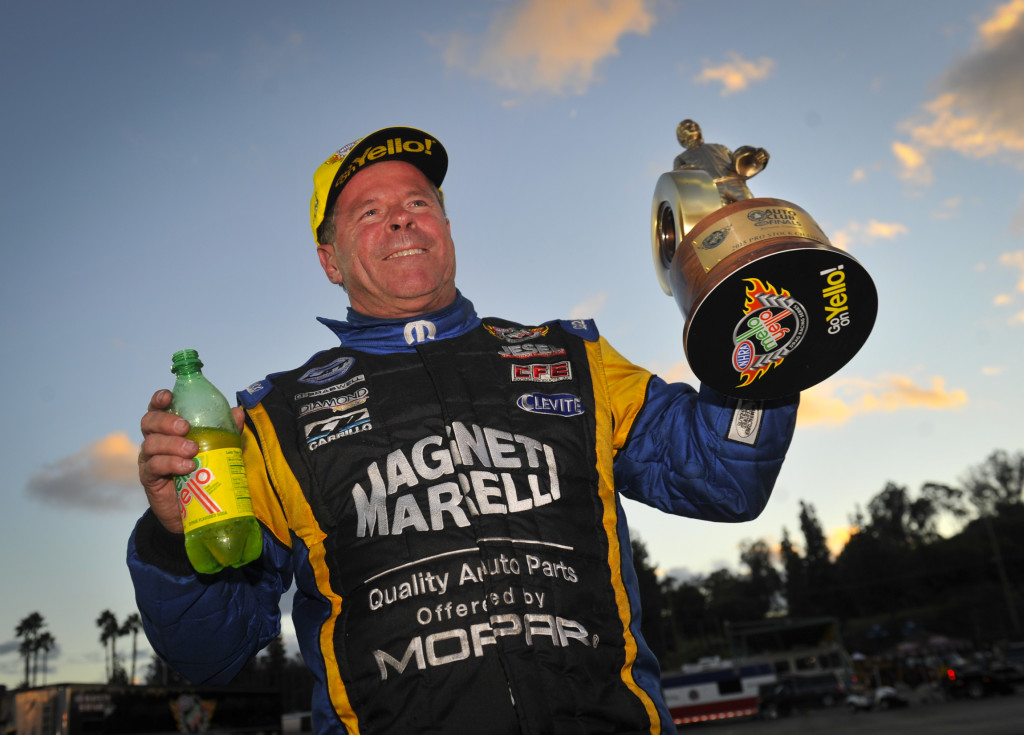 Allen Johnson ended his 20th season behind the wheel of a Mopar-powered NHRA Pro Stock car and found a perfect way to celebrate winning the final carburetor powered race for the division at the NHRA Auto Club Finals.

For Johnson, the victory was the second for the J&J Racing driver and team owner at the NHRA Finals (2012), his second of the season after five final-round appearances, and the 26th overall victory of his career.  The win also pushed Johnson, the 2012 Pro Stock World Champion, to third in the final championship standings, his fourth top-five performance in the last five years and his tenth consecutive finish in the top-ten.

Starting his day in the No. 11 seed, Johnson had to upset Jonathan Gray first round and his brother, Shane in the quarterfinals.  Then he played Erica Enders, matching her starting lone prowess cutting a light of .005, beating her on a hole-shot retiring the two-time champion for the season.

Matched against former teammate Vincent Nobile in the final — the 56th of Johnson’s career — AJ crowned his weekend with another holeshot win.  Johnson’s .011 reaction time overcame his slower 6.541 second, 210.18 mph pass, besting Nobile’s .033 reaction and 6.540/211.938 run.  In all four rounds on his road to victory, Johnson was first off the starting line.

“We dug down deep and got it done to give my family, the team and Mopar the win in the final race of the year and to cap off twenty years like this is special,” said Johnson, who has now advanced to the money round at the NHRA Finals in three of the last four seasons (2012, 2013, and 2015).  “I had to step up my game for this race day after being up and down through the entire Countdown and I wanted to finish the year on a high.  We struggled to get traction in our car through qualifying and even the first three rounds.  Right before the final round, we found that we had a bent piece on the car and fixed it and ran straight down the track to win it. The team doesn’t ever give up.  We’ve been out here for 20 years with Mopar and what a great sponsor they are.  The Mopar fans are fanatics and they’ve always been here with us.  It’s been an unbelievable ride with my dad [Roy Johnson] for 20 great years.  We’re not sure what next year holds for us, but we hope to be out here racing again in the Dodge Dart.” 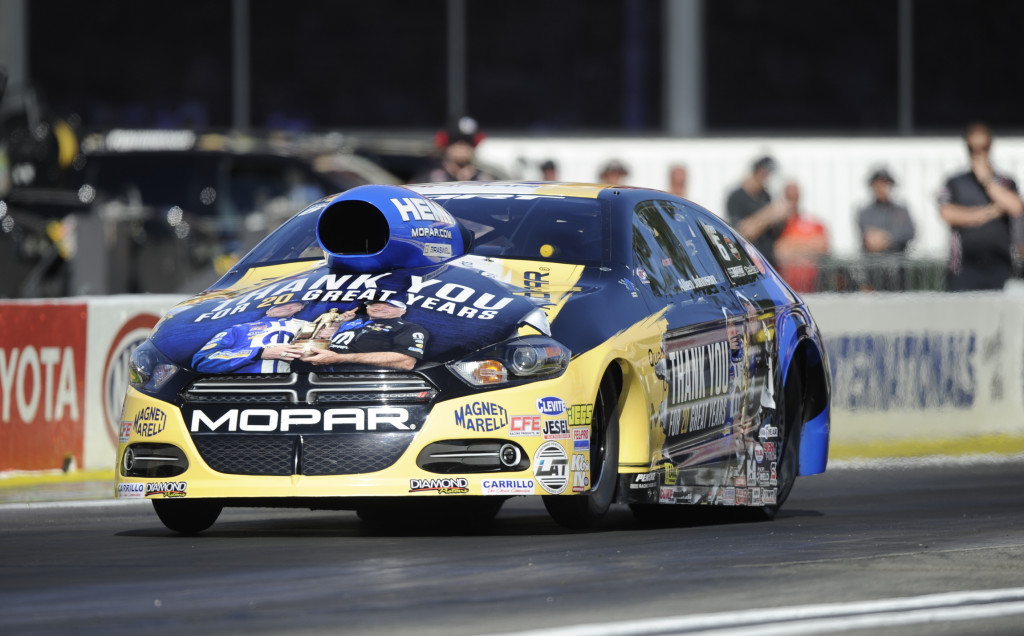 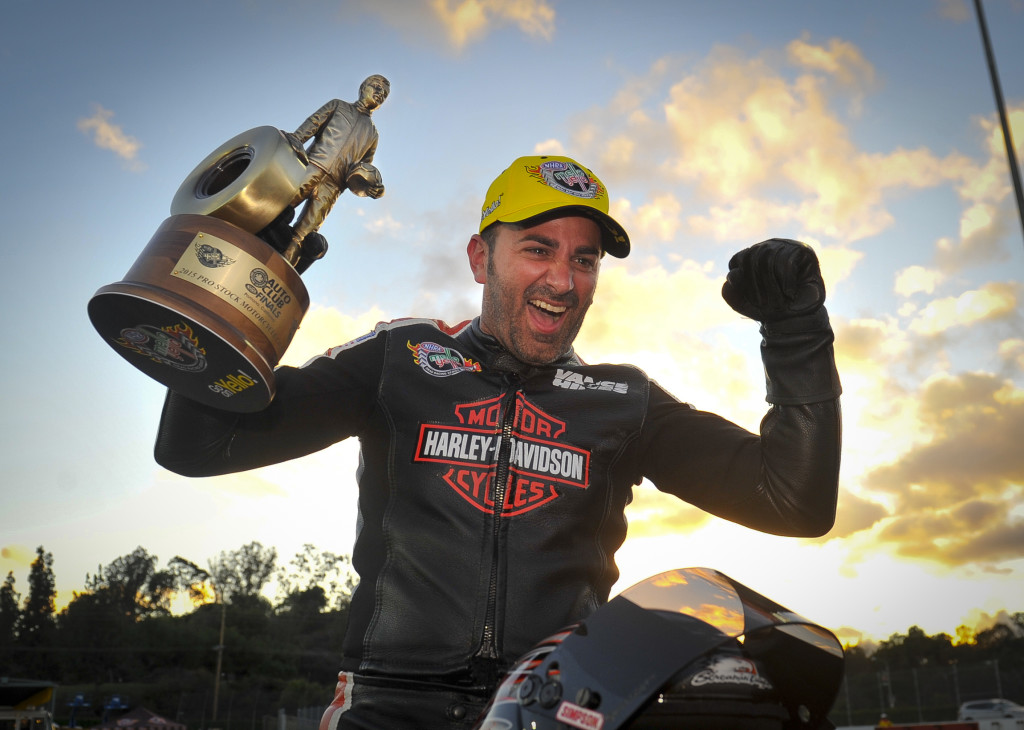 Eddie Krawiec closed the Pro Stock Motorcycle season with a victory and earned a second place points finish when he defeated two-time champ, Matt Smith in the final round.  Krawiec rode his Vance & Hines Harley-Davidson to a 6.846 at 192.58 to finish in front of Matt Smith’s Victory Gunner, which trailed with a 6.888 at 194.21.  It was Krawiec’s fourth victory of the season, fourth at Pomona and 31st of his career.

“I’ve been to eight finals in a row here in Pomona, so this track has treated me well,” Krawiec said.  “It is also a big deal for us to get the 75th win for Harley-Davidson.” 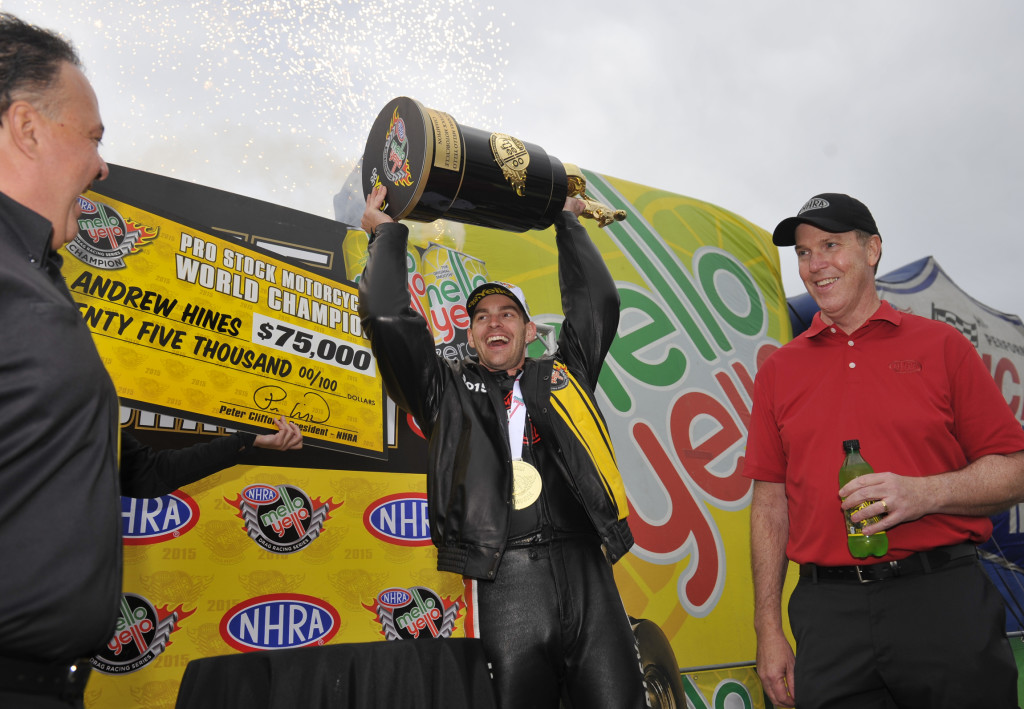 Meanwhile, Andrew Hines claimed his second consecutive and fifth overall world championship title in Pro Stock Motorcycle when his closest rival, Louisiana alligator farmer Jerry Savoie, lost in the second round.  Hines, who pocketed $75,000 for the title, is the youngest driver in NHRA history to win five world championships and continues the amazing domination by the Vance & Hines team in the two-wheel category.  He won by 43 over Krawiec and 58 over Savoie.

“My outstanding Harley-Davidson team did a great job of keeping me focused and keeping the pressure off of me,” said Hines, who won four races during the season atop his Vance & Hines Harley-Davidson, including three in the Countdown playoffs.

“It was awesome that my wife [Tanya] got to give me a kiss right before I ran, and thanks to my teammate for helping to get the job done.  I guess we put the fear of Harley into them.  Five championships are pretty awesome.”