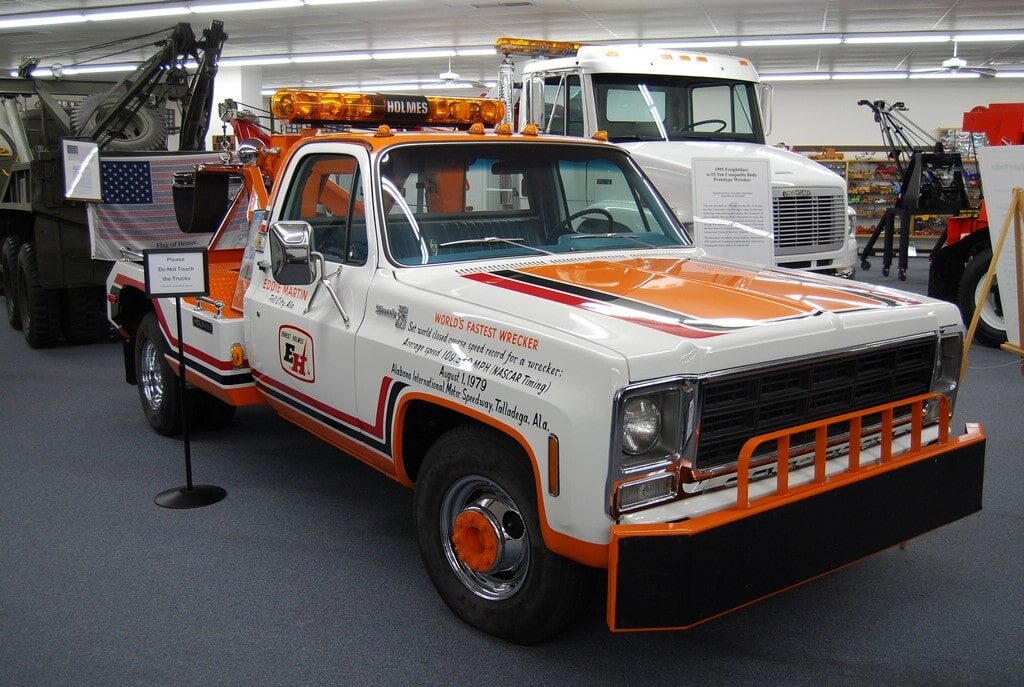 The “World’s Fastest Tow Truck” was recently restored in a joint effort by Twin Cities Wrecker Sales of St. Paul, Minn. and Miller Industries. The vintage Chevy wrecker – which set its speed record at Talladega Motor Speedway in 1979 – is currently on exhibit at the International Towing and Recovery Museum in Chattanooga, Tenn.

Miller Industries (the owner of Holmes) had a new Holmes 440 Hi-Power wrecker. To promote the increased power of this unit, someone decided to build a special high-performance tow truck equipped with one and use it to set a tow truck speed record. A standard factory-production model 1979 Chevrolet truck with fancy Silverado trim was ordered with the biggest engine available at the time: Chevy’s 454-cid big-block V-8.

An Accel ignition distributor and special Accel spark plug wires were installed in the truck. A factory four-barrel “spread-bore” carburetor was used on top of a Holley high-performance intake manifold. The factory exhaust manifold was replaced with Hooker tubed headers and straight pipes. Chrome engine accessories were added for looks.

A factory high-speed rear end with 3.21:1 gearing was used in the truck and the six 7.50 x 16 Michelin steel-belted radial tires were computer balanced and trued. A new AeroDynic emergency lighting system from the Signal Division of Federal Signal Corp. was installed. During the actual record run, emission-control parts were removed.

After the truck was completed, the time and place were set for making a record run. It would be attempted on Aug. 1, 1979 at the Alabama International Motor Speedway near Talladega. A veteran stock car driver named Eddie Martin was selected to drive the truck to a world closed-course speed record for wreckers. Martin had won the Stock Car Racing Championship in 1954 and 1955 and was a five-time Alabama Champion.

On Aug. 1, a Holmes team unloaded the tow truck at Talladega. Martin made a trial run. The team added a few gallons of racing fuel. It was blistering hot and the truck’s tires were starting to melt during Martin’s trial run. He would not have many chances and had to exceed 130 mph on the straightaways to get the record. With his custom-painted helmet in place and his safety gear ready, Martin stomped the accelerator and took off. 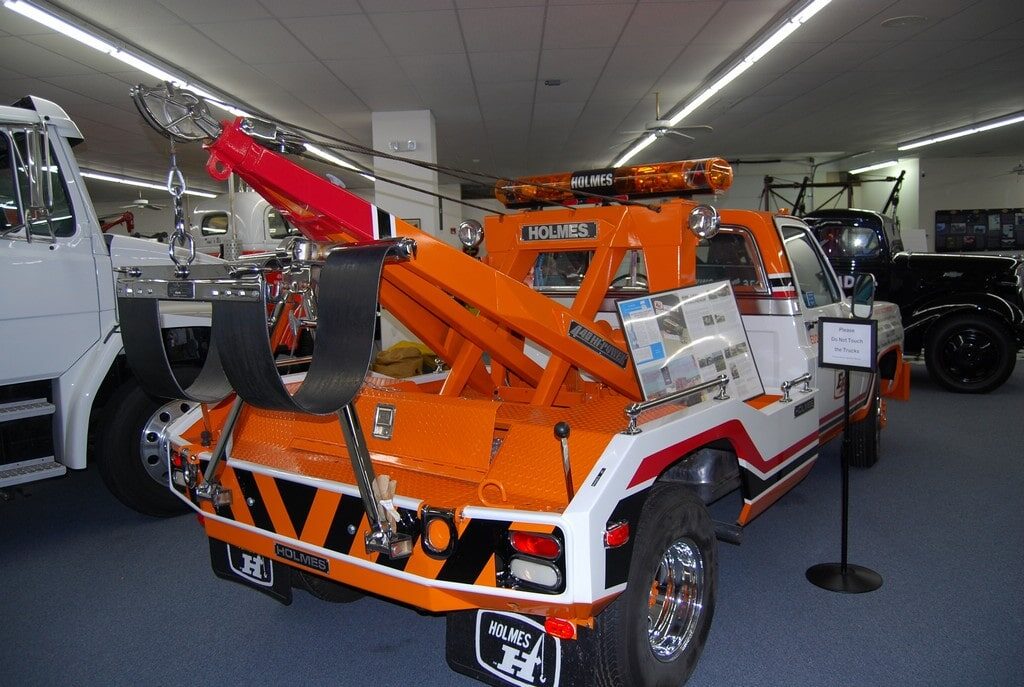 With NASCAR timers using electronic equipment to clock the official lap times, Martin circled the speedway as fast as he could. Speed wasn’t a problem, because the truck felt like it had a lot more in it than Martin could ever use. The real trick was holding the truck – with its wrecker, push bumper, light bar and dual rear wheels – on the scorched asphalt. It wasn’t exactly aerodynamic. NASCAR clockers average lap speed was 109.330 mph. Martin had hit 133 mph on the speedway’s 33-degree banked curves. After the run, Martin got a smooch from Debbie Gurosky, “Miss Holmes Wrecker” for 1979.

After its record run, “The World’s Fastest Tow Truck” spent several years touring automotive trade shows nationwide. Then it was donated to the International Motorsports Hall of Fame at Talladega. It was dutifully displayed inside the museum for several years and thousands of visitors got to see it. However, the museum then changed exhibits.

The “World’s Fastest Tow Truck” was put outside and it started to deteriorate. Roddy Pellow of Twin Cities Wrecker Sales (a Holmes distributor) heard about the truck. Roddy and his father restore old cars and both men thought it would be worthwhile to restore the historic tow truck, which had only 1,600 original miles on the clock.

The truck’s hood was kinked and the special Holley intake was gone. The fuel lines and gas tank were rusted. Once these things were fixed, the engine fired right up. Since Talladega Motor Speedway belongs to the State of Alabama, it took months of negotiation and lots of paperwork before the truck could be restored. It didn’t need a frame-up restoration; it was basically an almost-new truck that hadn’t been maintained.

The truck was used to help promote the 90th anniversary of the Earnest Holmes Company at several tow shows before taking its place of honor at the International Towing and Recovery Museum, which is not very far from where it set the speed record. As far as the record – it still stands, of course. There’s only one “World’s Fastest Tow Truck.”