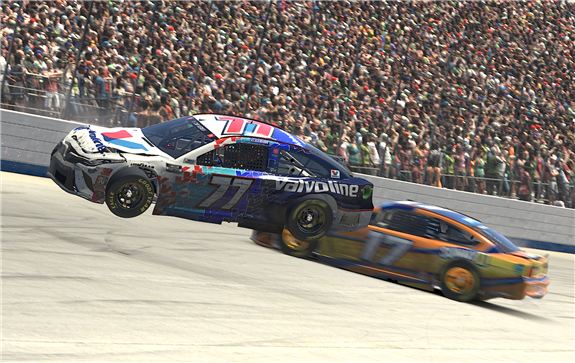 William Byron has been on fire as of late winning his third eNASCAR iRacing Pro Invitational Series race in the last four weeks. This week, however, was not a cakewalk, Byron narrowly held off Racer Christopher Bell for a first-place finish.

Although it took that push in the final laps to secure the win, the 22-year old Charlotte native led the most laps (79) on the day, which was quite an accomplishment considering the event featured a very Dover-like nine caution flags.

“It was a lot of fun today,’’ said Byron, who drives the No. 24 Hendrick Motorsports Chevrolet in the NASCAR Cup Series. “Obviously there was a lot of cautions, so I just had to kind of pace myself. It was hard to predict when we were going to get a longer run so it’s hard to know what to do with the tires in terms of how much to save, whatnot.

“My help there, Nick [Ottinger], Matt Holden, did a great job of really kind of leaving the strategy up to them as far as what tires to take. I think four tires at the end was the right call to be aggressive. Just thankful for their support and ready to get back to our normal racing here soon.’’

Bell’s runner-up showing in the No. 95 Leavine Family Racing Toyota was his best finish – and first top 10 – in the six eNASCAR iRacing Pro Invitational Series races to date. Timmy Hill, who battled Byron for much of the race, finished third – his fifth top-three finish in six races. Joe Gibbs Racing driver Erik Jones was fourth, followed by Front Row Motorsports’ Michael McDowell, both earning their first top-five finishes in the virtual series as well.

The eNASCAR iRacing Pro Invitational Series was created to give both competitors and fans a way to enjoy the sport during the country’s downtime fighting the COVID-19 coronavirus.

Next week’s race at the historic North Wilkesboro Speedway – no longer on the NASCAR Cup Series schedule – will be the last virtual race, however.

NASCAR announced this past Thursday it would return to real-time competition on May 17 at Darlington Raceway.

There will be a pair of NASCAR Cup Series events at Darlington – on May 17 and 20 – and then at Charlotte Motor Speedway on May 24 and May 27. There will be no practices and only one qualifying session – for the sport’s longest race – the May 24 Coca-Cola 600, and no fans will be allowed to attend the races at this point.

But before the sport begins its initial return to real-time competition, Byron has certainly proven himself a dominant force in iRacing. His combined 406 laps led in the six races to date is more laps out front than all the other drivers combined.

Although, iRacing is a completely different scenario than real time NASCAR Cup Series competition, Byron conceded the work he has put in to earn these iRacing wins against the same top-line NASCAR competition he’ll soon face on a real-time track, does have an upside.

“It honestly feels really good,’’ Byron said. “I feel like even though obviously it’s virtual racing, it’s a very similar platform to what we do. The physics and geometry of everything is similar.

“What gives me confidence is the fact that in pressure situations, being able to deliver under those is critical in a real race car because everyone can go real fast, but it comes down to the strategy and execution of that.

“It gives me a lot of confidence in the heated moments of the race. I’m excited to bring that back over to the real race car.’’

Hill, who has perhaps been Byron’s top competitor these weeks, was still smiling on the FOX broadcast even after being overtaken for the win.

“I knew I was a sitting duck,’’ Hill said. “We came up short again, but William did a great job throughout the iRace. I just want to win again.’’

He’ll have that chance Sunday at the historic North Wilkesboro (N.C.) Speedway – a .625-mile oval that has featured some of NASCAR’s most iconic racing and racing names. In fact, FOX Sports NASCAR analyst Jeff Gordon – a four-time NASCAR Cup Series champion and member of the NASCAR Hall of Fame – said he was seriously considering competing next week. He is the last driver to win a NASCAR Cup Series race at the track in 1996 before it closed down.

It all makes for a highly-anticipated closure to the eNASCAR iRacing Pro Invitational Series and an enthusiastic send-off for the return to real-time racing in just two weeks.

“I’m excited,’’ Byron said of the 2020 season resumption. “Obviously, we’re going to have to be careful health-wise, really take care of ourselves. That starts with us as drivers to make sure that we’re being smart and things of that nature.

“When it comes to the racing I’m honestly just very excited because it kind of goes back to your roots as a driver of when you show up and you race, maybe you have a few laps of practice, but ultimately you get in the car and drive.

“I’m looking forward to that aspect of the race, not really being there for a long time, but just getting out there and driving.’’