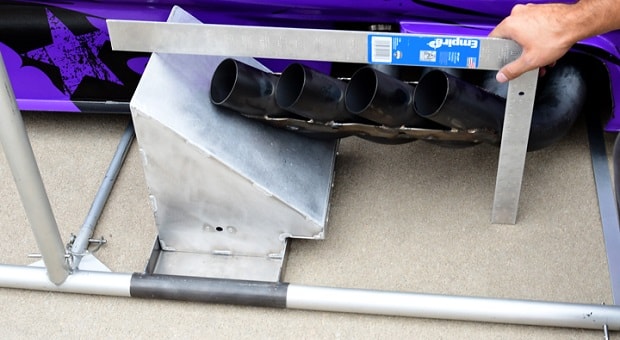 NHRA’s Funny Car racers knew something wasn’t right when they went to tech their cars in testing before the first races of the 2018 season. They were measured one way; other certain cars were measured in a different manner.

Some background: at the close of 2017’s 24-race season, NHRA said it would only allow a 40-degree setback for headers on either side of the Funny Car body.

All teams were measured at the centerline of the car – except a certain few. Initially this issue was billed as a John Force Racing vs Don Schumacher Racing issue on header measurement. JFR’s cars couldn’t comply to the measuring fixture, so NHRA didn’t measure JFR’s headers exactly the same as it measured everyone else’s.

The discrepancy fueled anger in the pits. The racers, who normally don’t band together to fight inter-team quarrels, all felt strongly enough about this to take note of it. It was apparent to their eyes that JFR was using a more radical incline for its headers; NHRA wasn’t forcing them to comply. Rather, it adjusted its strictures.

On July 8th NHRA clarified their Funny Car header rule: “Double-pipe insulated exhaust headers mandatory. Minimum Funny Car header angle 40 degrees, measured in reference to ground and parallel to the center line of the car (X axis). Maximum width of headers: 83 inches. Maximum header height 11.5 inches, measured from the ground to the highest point at the exit of the exhaust. Maximum header pipe O.D. 2.75 inches, O.D. and I.D. must remain constant beginning 8 inches below the header flange to the exit of the header. Centerlines of all four exhaust pipes must be parallel to each other and each pipe must contact adjacent tube.”

Why this rule couldn’t have been written correctly so many months ago – the change to a 40-degree layback was known since the middle of 2017 – is anyone’s guess. The fact that NHRA wrote a porous rule is something they’ll just have to overcome in the future by doing a better job.

The clarification came after the race at Epping, NH. It came after one of the least combative tuners in the paddock, DSR’s Dickie Venables, crew chief for Matt Hagan’s Mopar Dodge Charger R/T team, brought the issue to a head by speaking to NHRA after the Norwalk round. “All we really wanted was for them to measure headers the same way; I ended up being the bad guy for saying something,” Venables said.

At Denver and Sonoma, I spoke to some racers about this issue, most of whom didn’t want to be quoted on the record. I did not speak with anyone from John Force Racing because I pretty much knew the responses would be a shoulder shrug – John Force took the win at Denver and Robert Hight won in Sonoma – because they were able to use their power better than the rest, even after NHRA clarified their rules on header measurements.

Every other tuner in the class gives credit to the team at JFR for their ability to prep and tune their race cars, with or without the benefit of laidback headers.

Still, how we got to this point and why this latest header controversy even happened at all is part of the underbelly of racing. Tuners and crew chiefs get paid well, very well, to push the limits of the rules in order to beat the other racer in the next lane. Doesn’t matter who you are. The idea is to push those rules until they break.

All that anyone wanted was consistency from NHRA. “What we know today,” said one racer, “is there was a discrepancy in how the headers were measured from team to team. All teams will have to run under the new guidelines.” His crew chief added, “There’s a real fixture now, where the header goes into the fixture and if your headers don’t fit under the fixture, you’re not legal. They took the margin of error out so the template they have now is what we’re using. There isn’t the ability for the person checking it to have any way to stretch it; all four pipes have to be identical.”

The different means of checking headers created dilemmas for those who have had legal headers. Parts wear out during a 24-race season and need to be replaced. Parts must be ordered in plenty of time, as manufacturing isn’t always done at a team’s facility. While both John Force Racing and Don Schumacher Racing design and construct their own headers – among many, many other parts – most teams don’t have that liberty and need to place orders well in advance to keep their shows on the road.

When NHRA mandated 40-degree layback of the headers, they built a “fixture that was supposed to be parallel to the car, to the centerline of the crankshaft, square to it,” one crew chief said. “You were supposed to have your header layback so it would fit in the gauge.”

When the teams showed up at Phoenix testing in early February, prior to the start of the season, “They made a fixture, a gauge that slid onto the car from the ground. It would slide up to the headers and fit, but they couldn’t get it to work for the three cars. They had to cut the fixture in half and then, instead of being parallel to the car, it was angled to the car; the angle worked to fit the fixture to those three cars.” 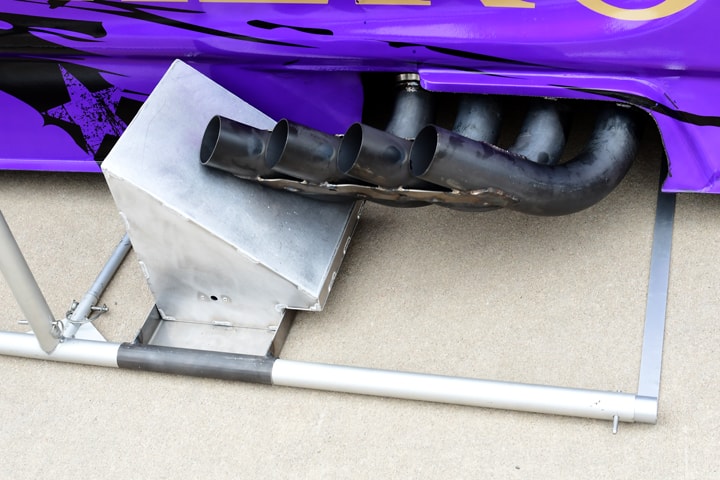 That kind of discrepancy had people squealing right from the start and, when it was time for them to buy legal headers, they didn’t know what to do. One crew chief said, “We went to Topeka, and in theory they said it could only be 11 inches high off the ground. Then we wanted to make the header more like what they [JFR] had and we were told we can’t do that. It’s been a fight back and forth between the teams and NHRA. It’s been this way for years, how they check the headers, and now they changed it.”

The new fixture built by NHRA is helping bring everyone’s blood pressure back to normal. It has to be parallel to the car and on the ground. The amount of air pressure in the front and rear tires is designated and this process must be completed before any car does its first qualifying run. The line at tech for Denver was very long – good thing both qualifying sessions took place later in the day.

As one crew chief aptly put it after going through discussions with NHRA before the rule was finally quantified: “You don’t want to do things twice, like build something and have them take it away later. We just want to be equal at the tech trailer.”

Laidback headers are a performance gain because they lighten the front of the car dramatically the farther back the headers are angled. “Everybody’s used the headers to make power. It makes the front end lighter as you lay them back more – and it’s not lighter by 100 pounds – we’re talking 6-800 pounds lighter by how far you tipped them back,” a crew chief told me. “When we first went to 45-degree angles, we started running really well; it’s like a free performance gain.”

Jim Head, who owns his Head Racing team and has Jonnie Lindberg driving his flopper, just kept shaking his head: “How did they get away with checking three cars differently?” he mused. “I know what they did, the question is how they allowed Force’s team to cheat is beyond me. There’s no other way to put it. I don’t know whether they did it stupidly or intentionally, but what they did was wrong and I won’t forget it. It’s ridiculous.”

That an issue has been ongoing since before the season began and the NHRA Mello Yello Drag Racing Series season is approaching, this weekend, its 16th race at Seattle, is incredulous. Still, the crew chiefs with whom I spoke give credit to the brain trust at JFR for what they did. “They’re still kicking our butts in qualifying. It’s a feather in their cap to pick up where they left off. Bottom line is we’re happy with the decision and I think other teams are happy with it. Hopefully it’s over and we can go race our cars and not have to talk about headers anymore…”

This writer attempted to get information from NHRA on the subject. The response from Ned Walliser, the vice president of competition, was simplistic: “We clarified the rule based on the information we collected and the clarification took effect at the next event, at Denver.”

Editor’s Note: The original version of this story named Dickie Venables as crew chief for Terry Chandler’s Make-A-Wish. RacingJunk has corrected this and apologizes for the error.

2 Comments on What’s the Story with NHRA Funny Car Headers?