Fans, drivers, and teams may gripe about them endlessly, but no matter what series you’re talking about, rules changes are a fact of life. For example, the carburetor went the way of the dinosaur in NHRA racing due to a change in the rules package last year when they mandated the use of a Holley EFI system for all Pro Stock cars. This year they’ve made a number of other significant rules changes and I sat down with NHRA VP of Technical Operations Glen Gray and asked him about some of them as well as what affect he thinks the EFI mandate has had on the sport. 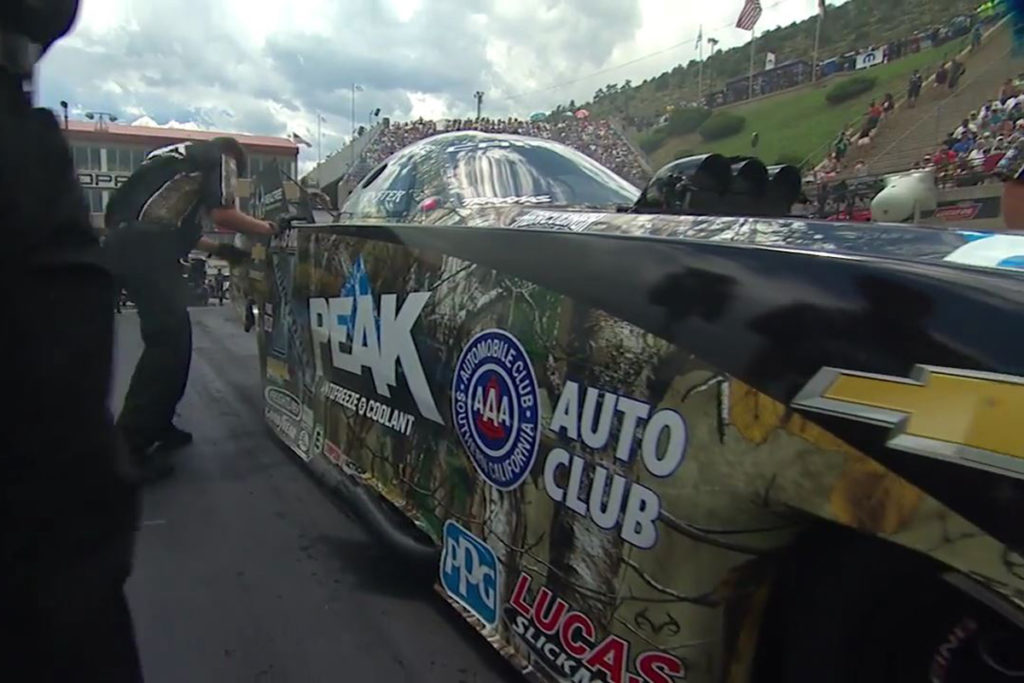 Gray did an interview with Lewis Bloom of the NHRA earlier this year where they discussed header angles on the Funny Cars. During that interview, it was mentioned that with lots of input from the Funny Car teams, it was decided that header angles would be changed to 32º for this year. During our conversation Gray told me that this had actually been rolled back and that it might be implemented next year because they felt there just wasn’t enough time for teams to get a good feel for the new header angle and what it would do to how the cars handled. 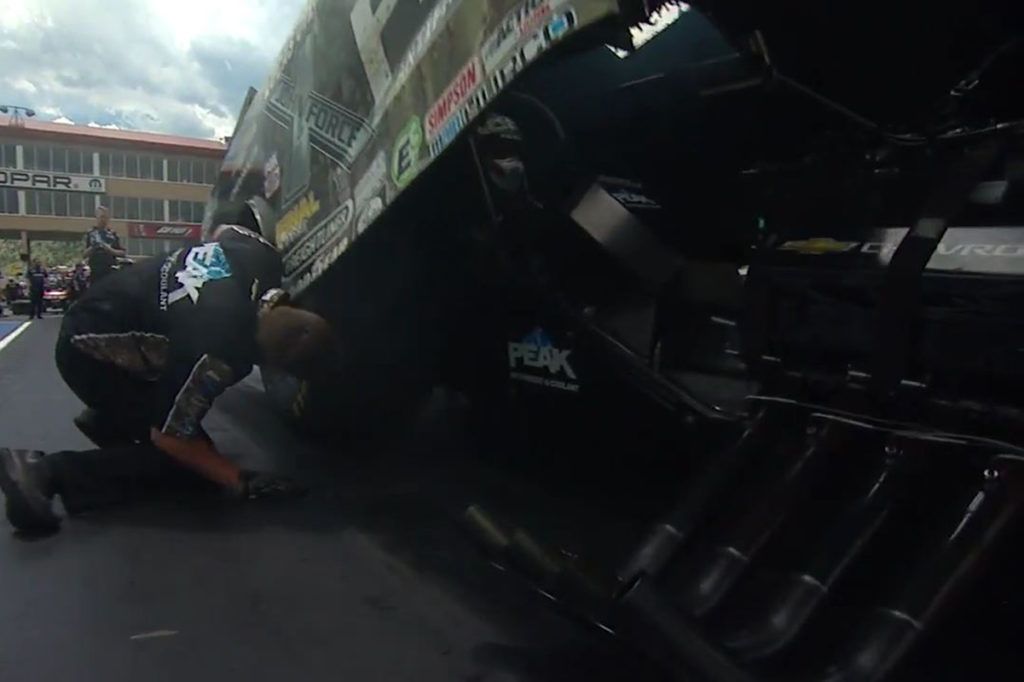 Gray said that they were considering the new header angle to help keep the speeds in check. He also said that laying the headers back like that helps with car handling by taking some of the downforce off the front of the car. Hand in hand with this was the NHRA allowing teams to raise the firewall height by three inches and add to the wicker on the front of the wheel wells, both of which are helping the teams to balance the cars better, making them easier to drive and control. 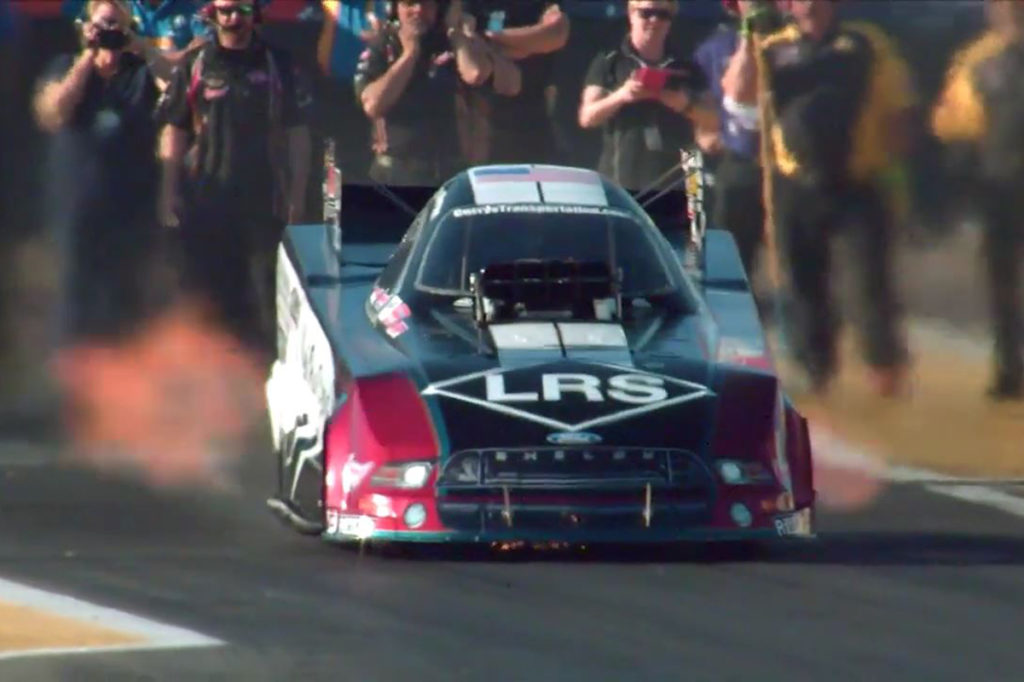 Pan pressure is similar to crankcase pressure. It’s a good indication of the condition of the engine and whether it’s getting ready to suffer a catastrophic failure during a pass. Reducing the pressure from 12 PSI to nine PSI means that we should see less engines exploding. What happens is that there’s a pan pressure switch in the engine that will shut off the spark and fuel if that nine pounds of pressure is exceeded and deploy the parachute(s) at the same time. This is just for the categories that are running alkie engines. 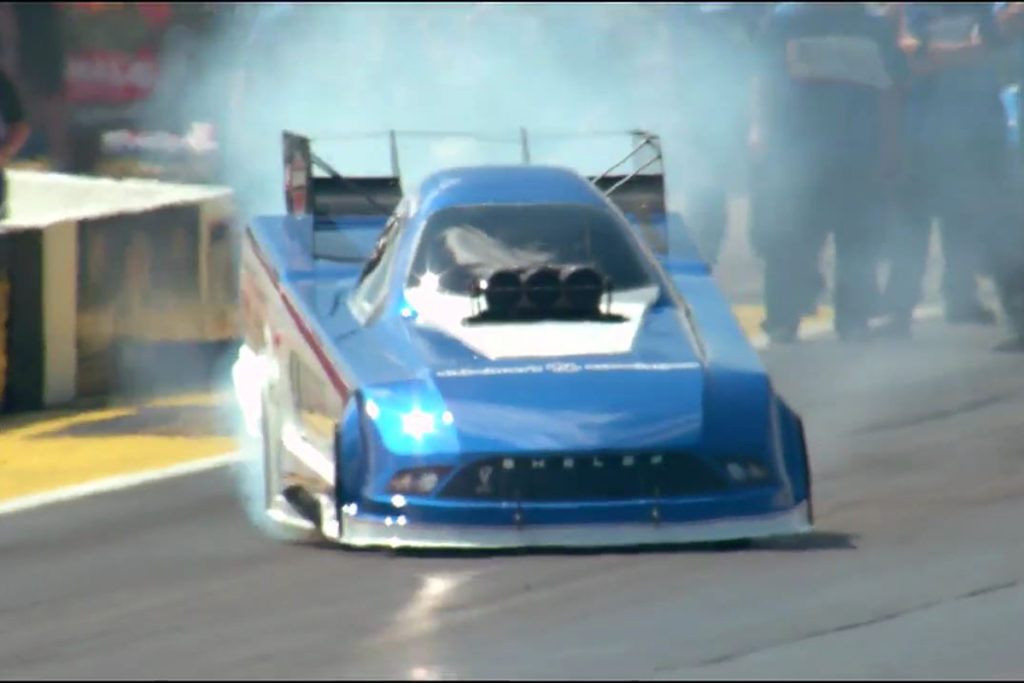 This was mostly a safety decision, but it should also help teams save a significant amount of money because not as many engines will explode due to overpressures. Longtime fans will also recognize it as a means to help speed up the action on track because when an engine explodes, it puts a ton of oil on the track-oil that has to be cleaned off the track, which is a painstaking and time-consuming process. 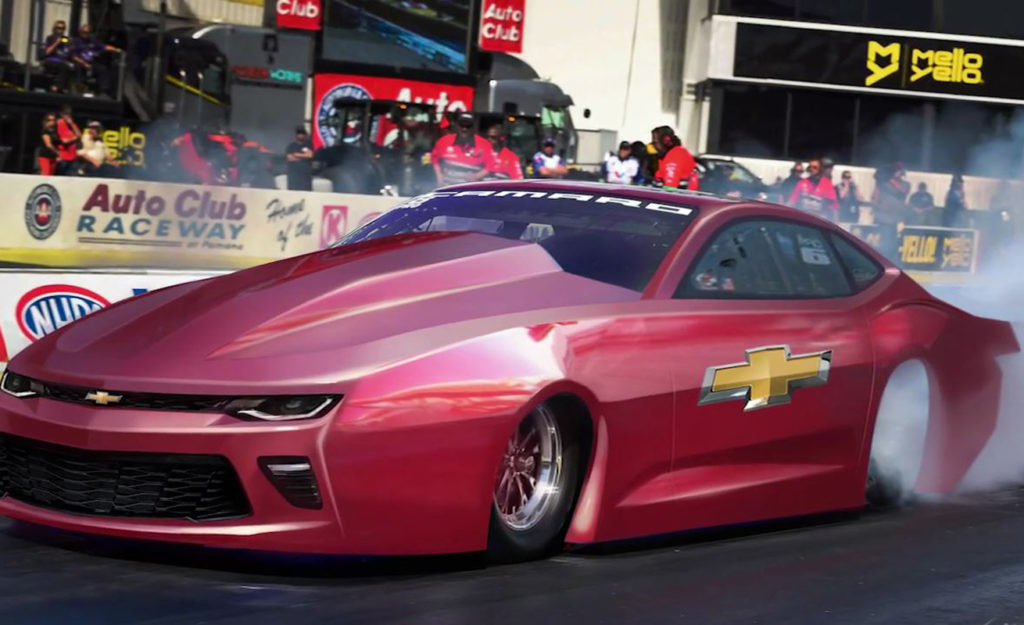 We also spoke a little about the new 2017 Chevy Camaro for Pro Stock Class racing. This is the first Camaro that has been designed from the ground up as a purely electronic fuel injected vehicle. This Camaro has a 500 cubic inch engine under the hood and puts out around 1500 horsepower. 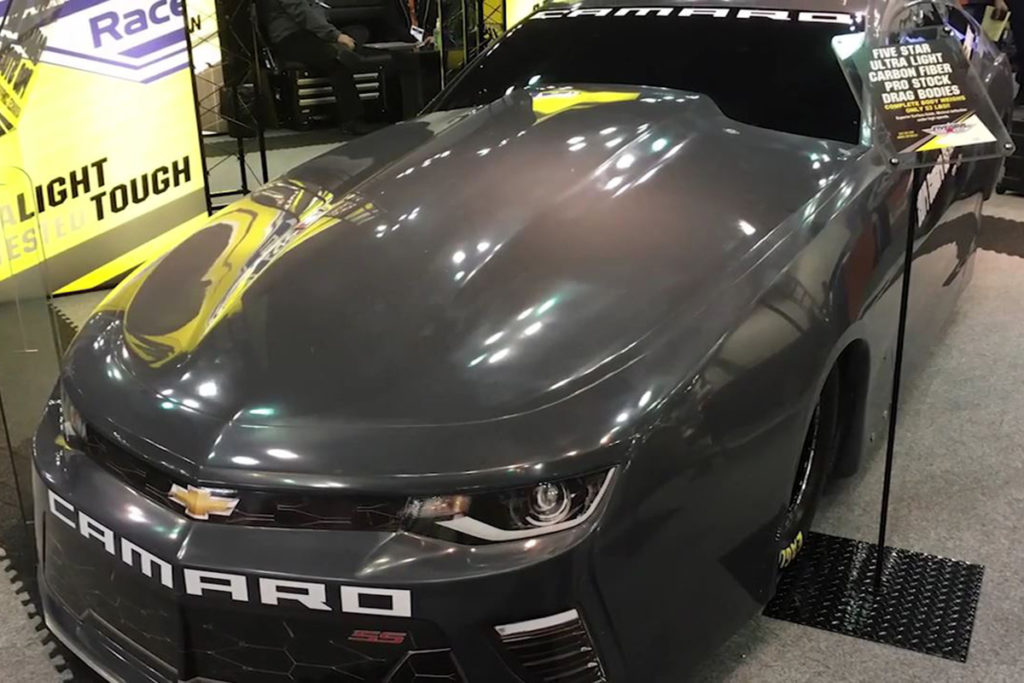 Somewhat hand-in-hand with the debut of the 2017 Pro Stock Camaro, Gray also said that Goodyear has come out with a new tire that was available for the first time in Pomona, for use on a voluntary basis, but that became mandatory at Chicago. 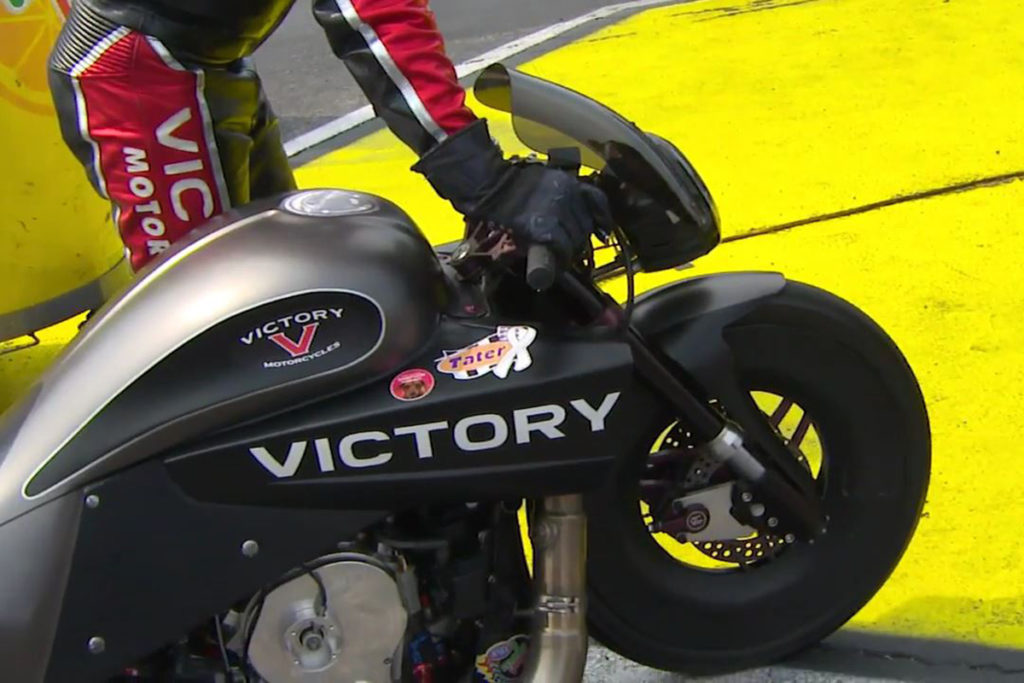 Gray was also excited about the new Pro Stock Modified bike from Victory. These are equipped with a Victory-built normally-aspirated160 cubic inch two valve pushrod engine. Some of these are carbureted bikes, while others are injected. Gray said that induction type is up to the teams to decide-for now. 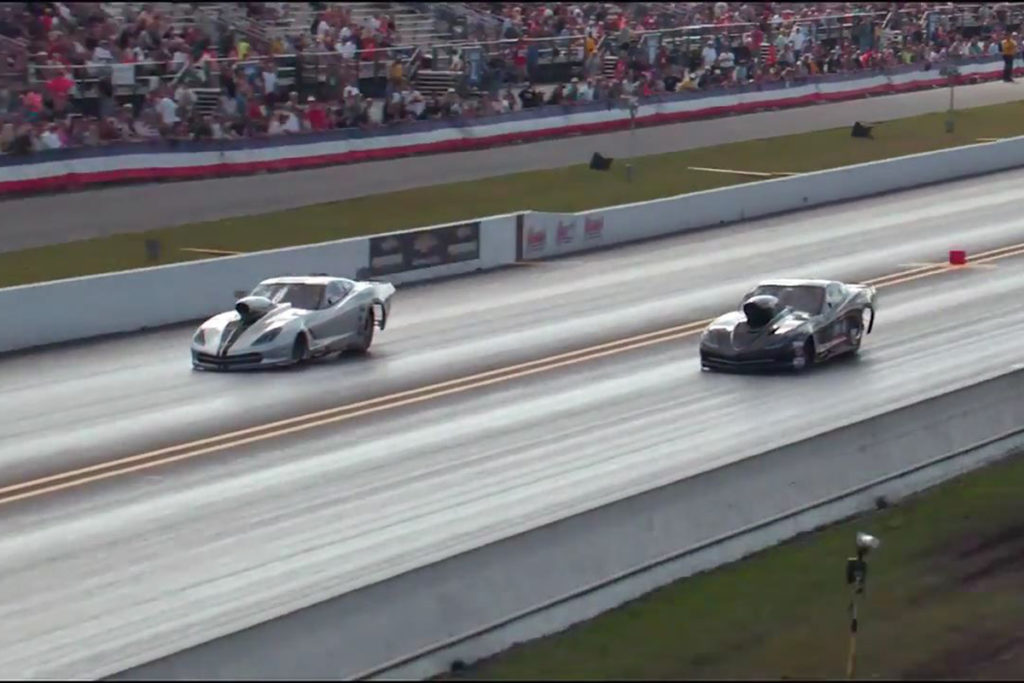 Supercharged cars were not getting parity with turbocharged and nitro cars, so the NHRA’s tech department allowed teams to take their blower overdrive from 14.5 percent up to 20 percent. However, in the seven races in that class that have occurred so far this season, they noticed that this was too much and these cars were basically seeing an unfair advantage, so it was backed off to 16.5 percent overdrive on the blowers. This was done in order to keep the competition close.

Changes Also Made to Personal Safety Equipment Due to Certification Issues 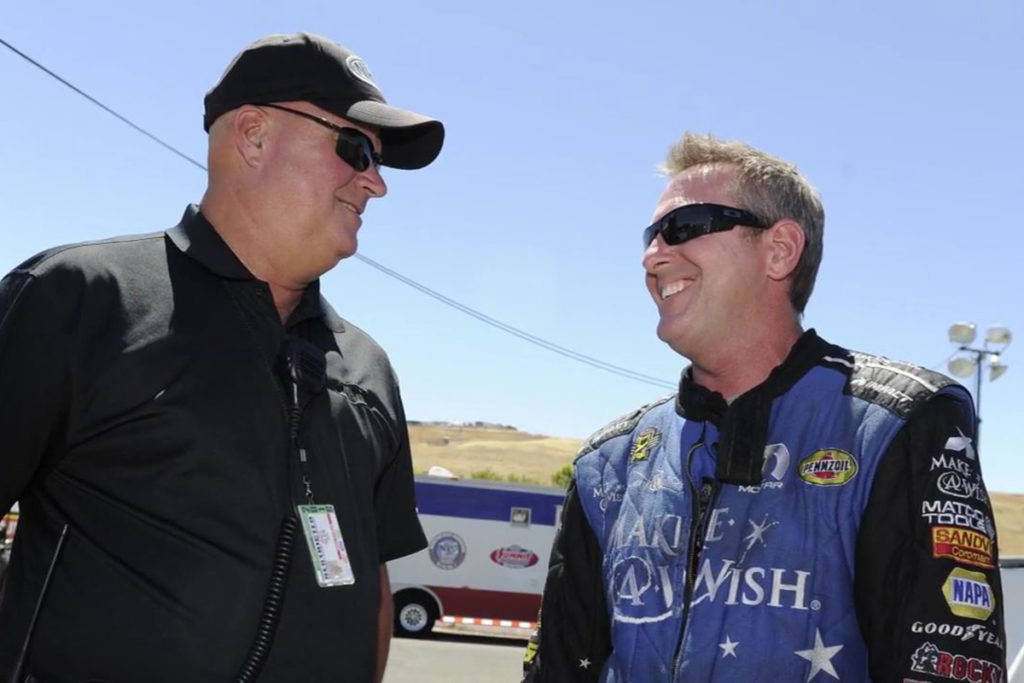 In reading through the rules updates for the 2017 season, I noticed that changes were made to what helmets and safety harnesses were allowed with a number of helmets being removed from the list of approved helmets. Gray said this was because SFI and Snell certifications are only good for 12 years, and those helmets removed from the list had expired certifications as they were all produced in 2005 and before. 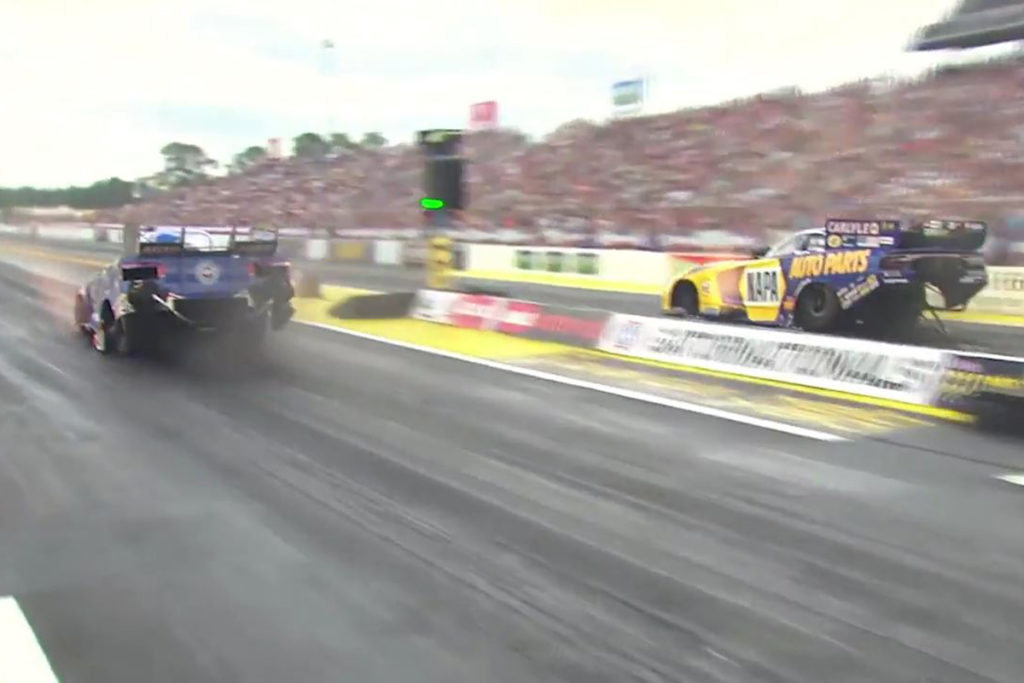 Two significant changes were made to the rules for the production classes that caught my eye. The first one is that even if the class blueprint specifies a three speed transmission, teams my use a four speed transmission. This was to include more combinations that more closely resemble actual production cars, Gray said.

Another change that I found interesting concerns heads in the stock categories. Previously, only OEM iron heads were allowed, however, in some of the older cars that race in the stock categories, these heads are no longer made and if they’re even available can be close to priceless. Because of this, they are allowing racers and teams to use aluminum heads, as long as they are made to the same exact specifications as the original equipment iron heads.

Looking at the EFI Rule Change for Last Year

You may remember that Racing Junk reported in late 2015 that the NHRA was mandating that all Pro Stock teams start using electronic fuel injection systems starting in 2016. This was done to make their cars more closely resemble the car you can head down to the showroom and buy. There hasn’t been a carbureted car roll off a production line in about 30 years.

I asked him a few technical questions about the injectors that can be used. He said that two injectors were approved: One has a throughput of 160 pounds (Holley part number 522-568) of fuel per hour and the other flows 180 pounds (Holley part number 522-588). Although these are Holley-branded injectors, they are actually made by Bosch. The rules also state that a maximum fuel pump output pressure of 90 PSI is allowed.

Another change that came along with the EFI requirement was that teams were told they had to roll back their rev limiters by a minimum of 1000 RPM. Some teams were running their engines as high as 12,000 RPM, while production cars rarely have the ability to go past 6000. Because of this, the NHRA mandated that rev limiters be set at 10,500 RPM. The controller is basically the same Holley Dominator EFI that you can put on your car, with some minor modifications to the software.

Obviously Holley isn’t the only manufacturer of EFI systems on the market. In fact, they’re not even the only maker of performance EFI systems. However, overall, they do have one of the longest-running relationships of all fuel system manufacturers. Other companies that were on the short list for specification were MSD, Motech, and Magneti Marelli. He told me that Holley was able to show the NHRA a system installed in a car almost immediately, which greatly informed their decision. 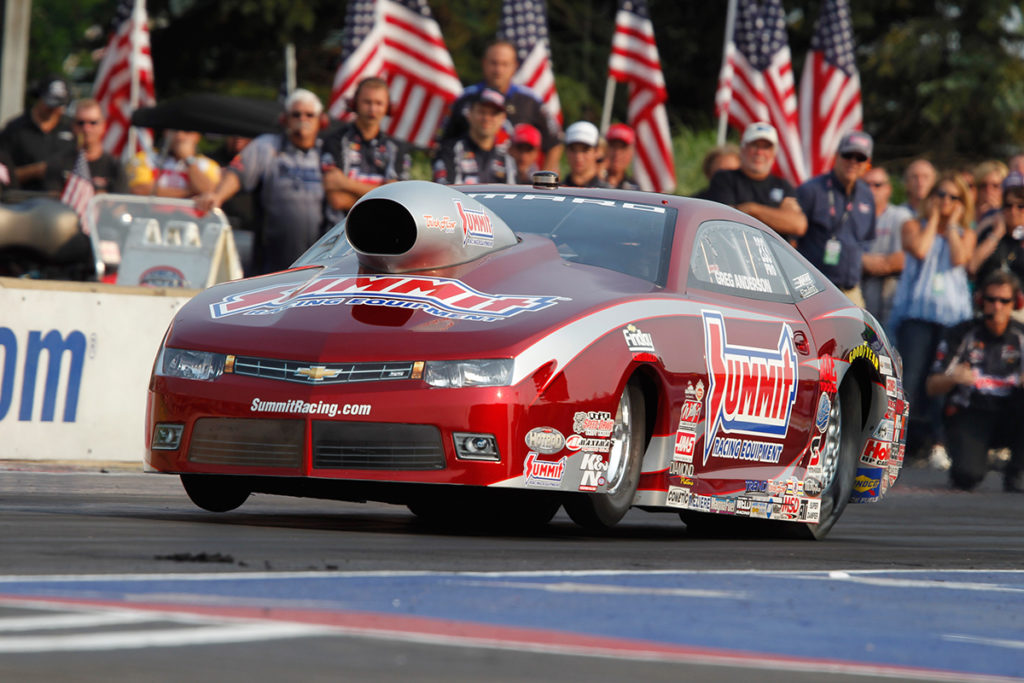 Gray said that the technical team was pretty worried because they only gave the teams six months to wrap their minds around these changes and get them under control. NHRA was actually worried that performance and speeds were going to take a significant hit because of the EFI mandate. However, that worry was unfounded. We’ve been seeing speeds of up to 212 MPH+.

One of the biggest reasons that everyone, including manufacturers and sponsors likes the EFI mandate is because of relevance to today’s production cars. This is obviously especially important to Ford, GM, Chrysler/Mopar, and Toyota. Fans can get excited more easily about a car that somewhat resembles the one in their driveway more so than they can a car that only resembles theirs in that they both have four wheels.