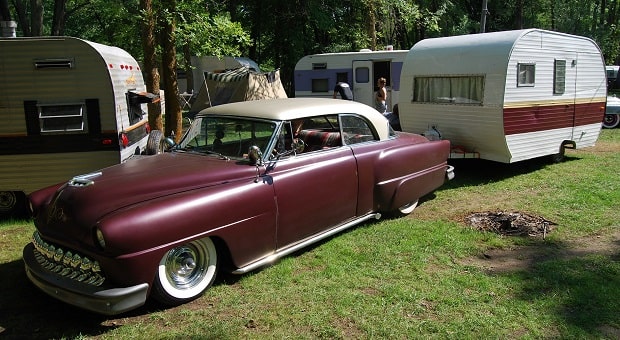 One of the latest trends in car hobbies is finding and fixing up vintage travel trailers from the ‘30s through the ‘70s. Car shows like the Symco Hotrod & Kustoms Weekend (www.symcohotrods.com) and the Iola Car Show (www.IolaOldCarsShow.com) are now featuring special “Tin Can Tourist” campgrounds for vintage travel trailer fans.

Trailer-only shows are also growing. The Murphy Auto Museum (www.MurphyAutoMuseum.org) in Oxnard, Calif., recently held its 6th Annual “Let’s Go Camping” show. In early June, over 60 vintage trailers converged on Bear Lake Campground (www.BearLakeCampground.com), in Manawa, Wis. for the first Annual Vintage Trailerfest. And beating both events by many years is the Midwest Vintage Trailer Rally(www.buffalolakecamping.com) in Montello, Wis., now in its 17th year. This rally is so large that it is now scheduled for two weekends with separate trailers each time. 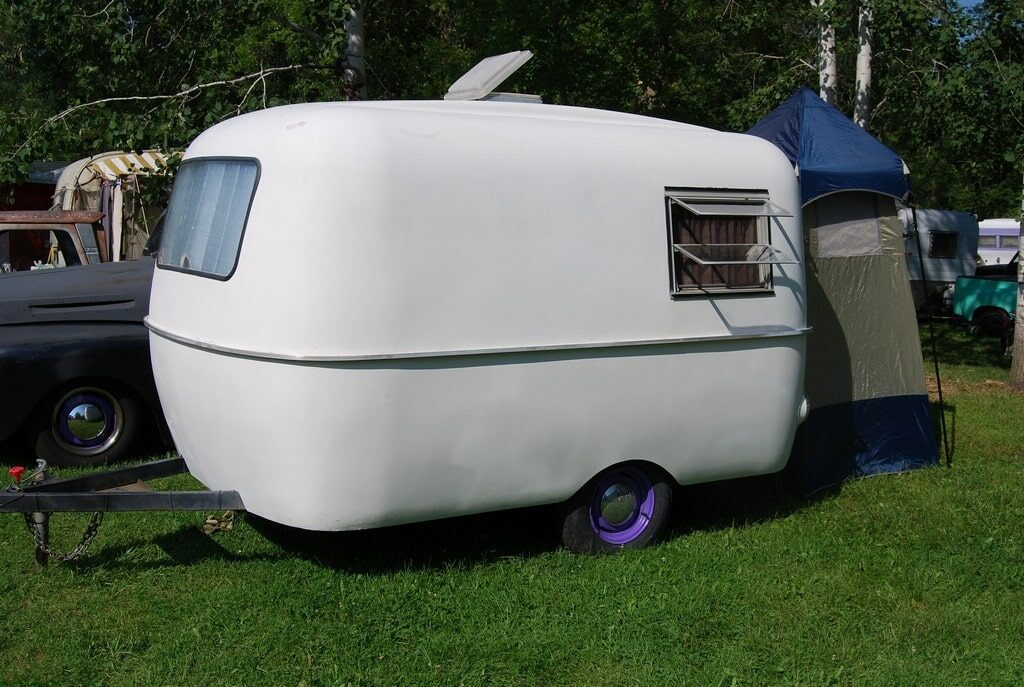 Vintage travel trailers and other classic RVs are showing up in museums as well. The RV Motorhome Hall of Fame (www.rvmhhalloffame.org) in Elkhart, Ind., is a museum and library based in a city where many of these vehicles are manufactured. We have also seen vintage trailers in the Old Montana Prison & Auto Museum in Deer Lodge, Mont., (www.visitmt.com) the Volo Auto Museum (www.volocars.com) in Volo, Ill. and the Wisconsin Automotive Museum (www.wisconsinautomuseum.com) in Hartford, Wis.

Car hobbyists sometimes pull an old trailer with an old vehicle; the ultimate puller is a car or truck of the same model year as the trailer. Some are able to take this even a step further by finding trailer models with car names – such as a Nomad or a Comet – and pulling them with a Chevy Nomad sport wagon or a Mercury Comet. 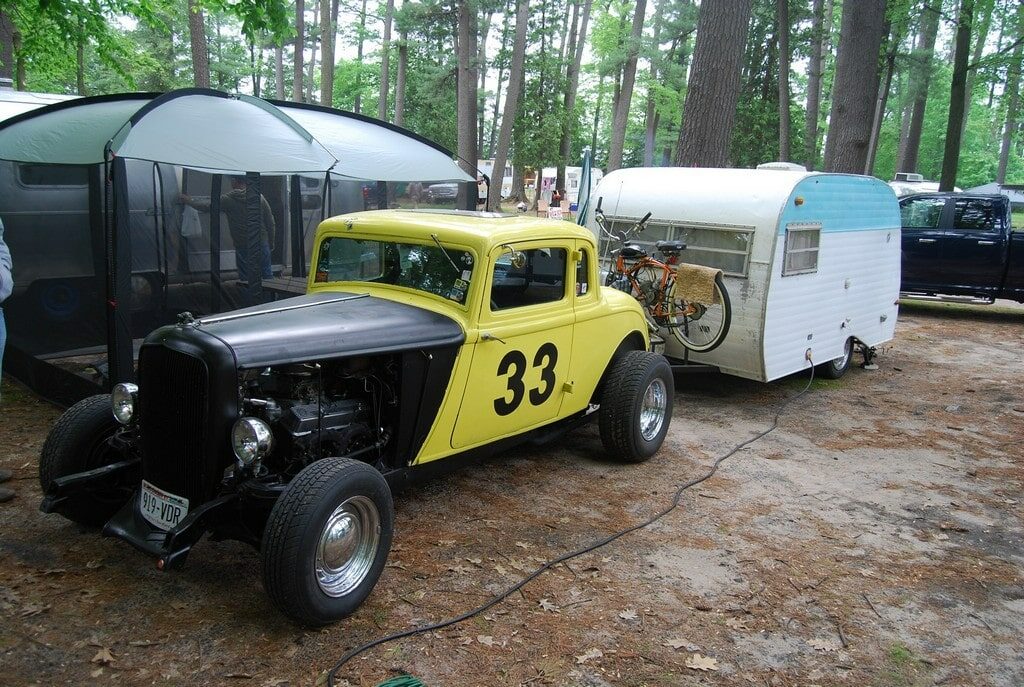 Of course, it is possible to tow an old travel trailer with a stock vintage car, as that is what owners did in the past. It doesn’t take that much horsepower to roll a travel trailer down the road. In fact, in 1949, Warren Cropp of Palm Beach, Fla., attended the Los Angeles Sportsman’s Show, where he purchased an 18-ft. Traveleze trailer that slept four people. He then pulled it home with his Harley-Davidson motorcycle. Despite this advertising stunt, collectors say that modified cars and trucks with updated drive trains pull better. Upgraded station wagons and pickup trucks seem most popular.

It’s likely that the earliest “motor homes” were the Motor Chapels built by the American Locomotive Co. for the Catholic Church Extension Society of the USA in 1913. Fifth-wheel style trailers pulled by modified Model T Turtle-deck Roadsters were also used as motor chapels. In that same era, house cars began to show up. The old Harrah’s Automobile Collection included a 1917 Pullman-style house car built on a Winton car chassis. Henry Ford had a smaller camper made by the Lamsteed company of Oakland, Calif. He and Thomas Edison went camping in it and it wound up at Harrah’s, too. 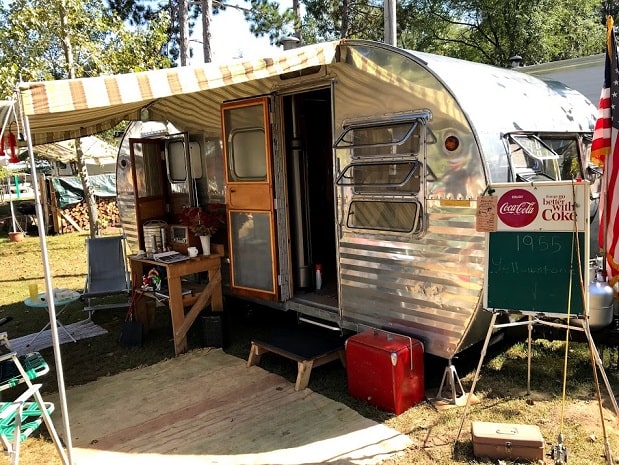 In the Gatsby era, Pierce Arrow manufactured 52 Travelodge camping trailers. Trailer building became a huge trend in the late ‘30s and early ‘40s. During World War II, many GIs learned about outdoor living and brought their lessons home with them. The number of companies making trailers grew and the Trailer Coach Manufacturers Assn., based in Chicago, offered an Official Guide to 3,000 coast-to-coast trailer parks for $1.

The July 1949 issue of Trail-R-News magazine carried over 90 large advertisements and 29 of them were placed by trailer manufacturers. They ranged from Admiral Trailer Co. of Burbank, Calif. to Zimmer Boat and Trailer of Detroit, Mich. In that postwar era, trailers were made in many states, but California and Michigan seem to have had the most manufacturers. The magazine had 11 ads from California companies, six from Michigan companies, four each from Indiana and Illinois companies and four from manufacturers in other states and England (Bakely Coachworks Ltd. had dealers here). 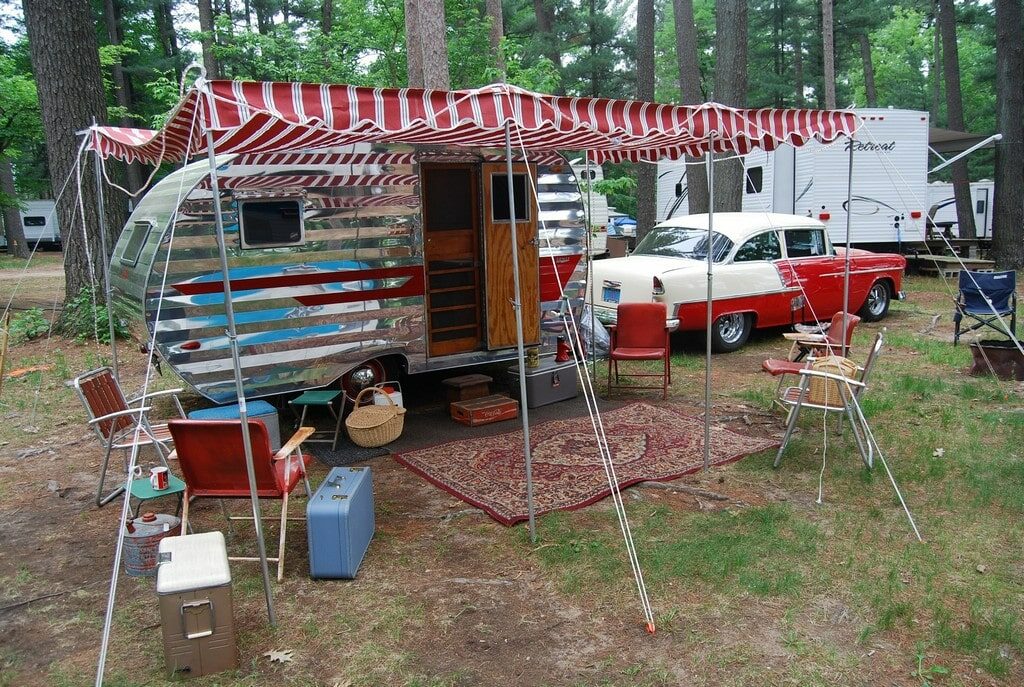 The most popular trailers today are probably shiny Airstream Liners that were originally produced by McFaul Brothers in Glendale, Calif. They were advertised as the “world’s lightest, fastest, easiest towing trailer coaches” and came optionally equipped with a toilet, shower, water heater and electric refrigerator. Airstream owners were one of the first groups to hold rallies that included vintage models. Life magazine had an article about one such rally in the early 1960s. Airstreams are still made today by Airstream, Inc., of Jackson Center, Ohio. They look like they did years ago and the company is reproducing the Bambi model, of which 1,100 were originally made in 1961-1963.

Collectors like the “Canned Ham” trailers (shaped roughly like a canned ham tin) made by manufacturers such as Yellowstone, Shasta, Nomad, Comet, Pathfinder, Trailblazer, Layton, Serro Scotty Sportsman, Forester and Westwind. Another popular vintage style is the pod-like, fiberglass-bodied Scamp. Smaller models are popular because they are easier to pull and easier for collectors to store when they’re not in use. 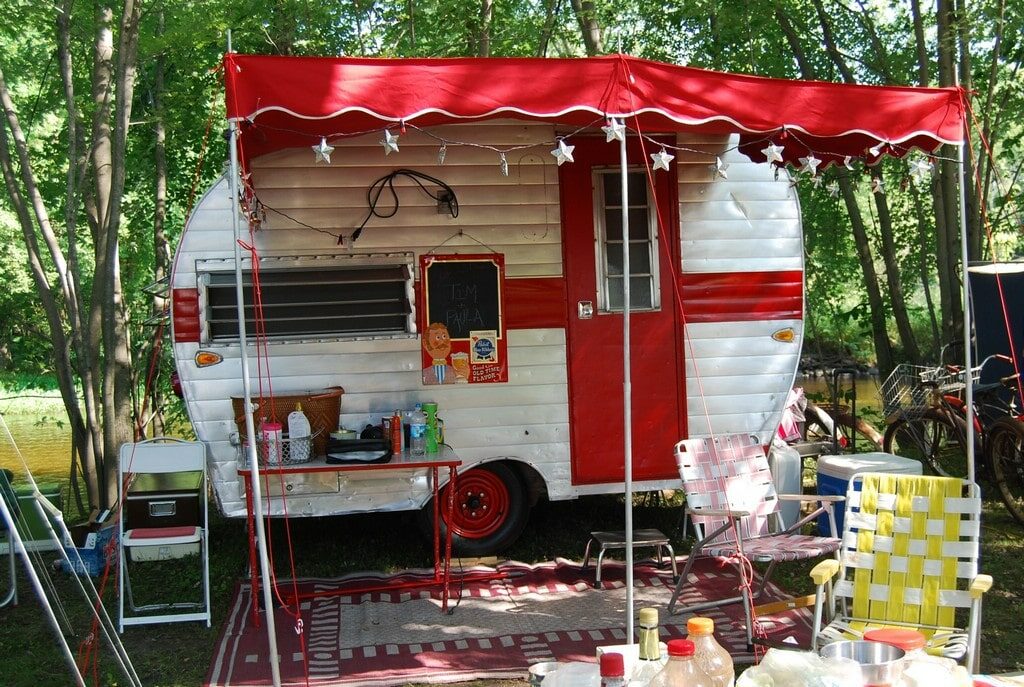 When taken to shows, vintage trailers are often displayed with period artifacts such as old Coke coolers and tin picnic baskets. A recent issue of Country Living magazine said these can be worth up to $350. Also popular are checkerboard table cloths and plastic pink flamingo lawn ornaments. It’s considered cool to paint a trailer in colors matching the tow car. We have even seen a trailer modified with 1957 Chevrolet side trim.

Of course, the snazziest-looking trailers all have lots of chrome or polished aluminum trim parts, chrome hub caps and whitewall tires. Striped awnings are very popular accessories and are often decorated with bug lanterns. Almost all Shastas have the optional wings attached to the upper rear corners. These are now being reproduced. 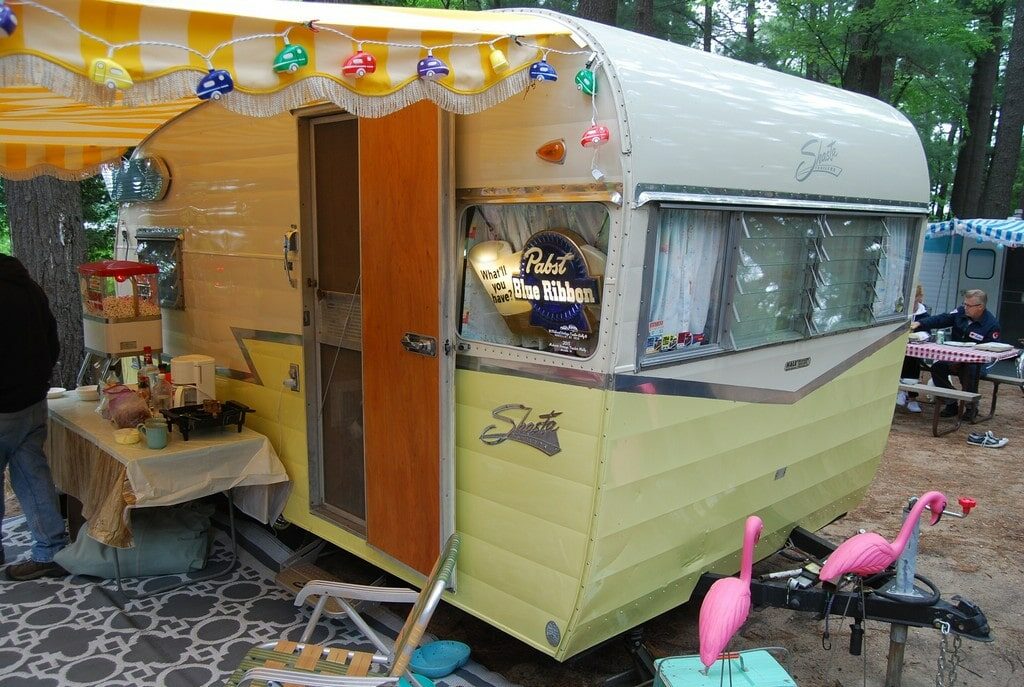 A few months ago, we appraised an Indiana Packard collection that included a 1970 Highway Cruiser camping trailer. It was in good condition, though it looked a little “dull” from years of sitting in a barn (and because of the “flesh tan” color in which it was finished). We found very little information about the manufacturer of Highway Cruiser trailers and the company’s history. There were some photos on the Internet of a 1955 Highway Cruiser trailer that was really a sharp-looking model with polished aluminum trim.

Even though we could not find specific Highway Cruiser details, we were able to compile a list of asking prices for a variety of trailers; these were referred to as the main source for a $5,500 value estimate. 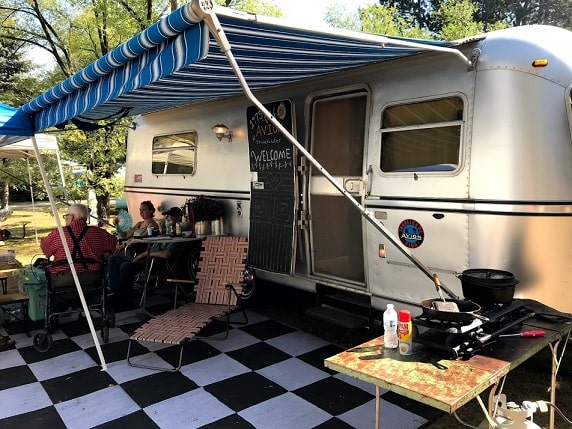 As you can surmise from the list above, restored trailers are worth considerably more than “as found” trailers. Many of the units seen at shows are as-found trailers that have been carefully cleaned up and treated to new paint, new curtains and new upholstery. A real trailer restoration includes more than that. There are often electrical and plumbing repairs involved. Most restorers completely remove all the outer sheet metal and start a frame-up rebuild that includes new wiring, updated plumbing, new wooden parts, corrosion repair, new or rebuilt appliances, cabinet work, structural repairs, upholstery, paint, hard trim restoration, brake work (often with upgrades) and hitch work.

A collector posted photos of the frame-up restoration of his trailer online and said that he already had over $25,000 into the still incomplete project. It was a pretty large trailer. At the Vintage Trailerfest event, Steve Prouty of Vintage Camper Restoration LLC in Cazenovia, Wis., said he always estimates restoration costs at $1,000 per foot of trailer length. Prouty said that demand for his restored trailers is growing stronger every year. 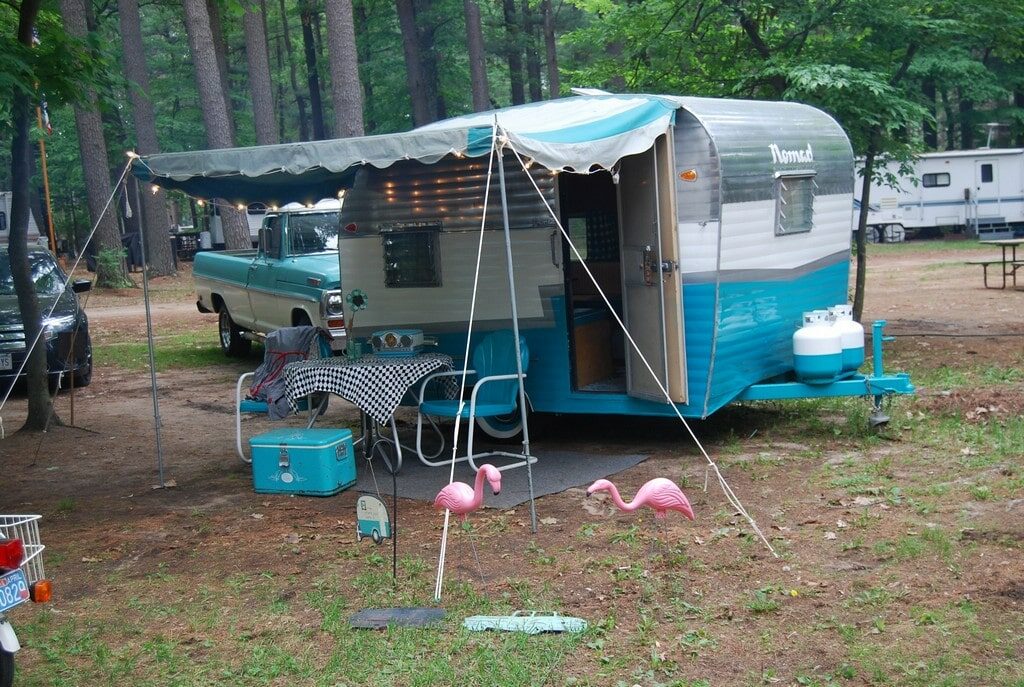 At www.ceciliatheshasta.com a vintage trailer enthusiast named Laura, who purchased and restored a 1970 Siesta Cabin Cruiser trailer, listed all her costs of buying and restoring the trailer. The grand total was $6,498.57. This suggests that you can save considerable money by doing a restoration yourself, just as you can with a car.

There are numerous You Tube videos documenting vintage trailer restorations and showing the type of work involved. If you can buy and restore a trailer for $6,500 and sell it for $10,000-$13,000 when it’s restored, there seems to be some upside to such a project. On the other hand, most owner restorations do not factor in the value of the restorer’s time and labor, which are big factors in a professional restoration. 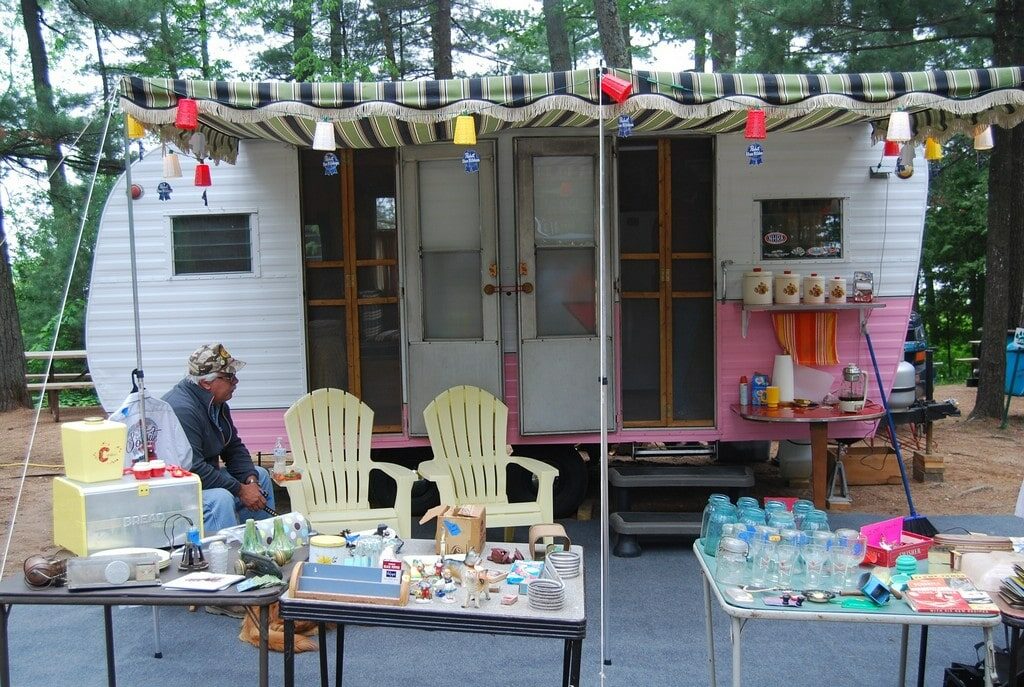